When we butchered the pigs last week we did various things with the three different animals. We took meat from the back and belly from all three to make bacon. We also created various roasting joints from all three – some went into the freezer to be used as pork, but some we held back to make ham and gammon joints with. We diced up some of the meat to be used in pork stir fries and we froze bagged up ribs for next years barbecue season. We had just over 5kg of meat for mincing and another 4kg mix of meat from the front of the third pig for making salami / chorizo with.

The bacon and several of the smaller joints set aside from the pigs went into plastic containers in a dry cure mix. Made up of salt, sugar, juniper berries and black peppercorns we rubbed the dry cure into the meat and then every day drained off the excess liquid the cure had drawn out and added a little more of the cure to the tub. After a week the texture and colour of the meat had totally changed and was darker, denser and much drier.

I sliced up the bacon into various cuts – rashers, lard-on style streaky bacon and some cubed for use in things like pasta bake or quiche. 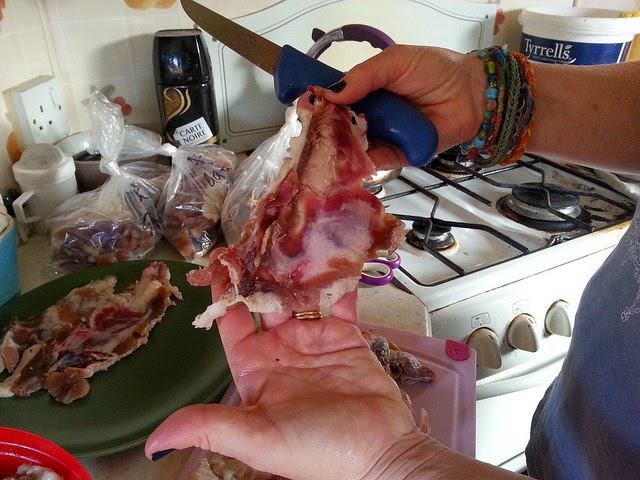 I had also put two bone in leg joints into a dry cure. This I have frozen and will roast whole to be used as ham for slicing for sandwiches. We did do some dry curing last year but this was the first time I tried joints and last years cured meat was smoked and chopped up for us. It was good to do the whole process myself this time.

This year I also experimented with wet curing in brine. One whole back leg which is a huge joint is due to come out of the brine soak tomorrow and be hung up for 24 hours to air dry. I am planning to bake and glaze that as part of our Christmas banquet (we will feast like self sufficient kings this year at Christmas!). I also soaked four smaller boneless joints in brine – which was a solution of water, sugar, salt, cloves and juniper berries. These came out tender, very soft and smelling like Christmas! As they had been boned they needed rolling and tying into joints for cooking. Another new skill learned and thanks to some internet research I can now tie a butchers knot in my butchers string – well with help – it is definitely a job requiring more than one pair of hands! 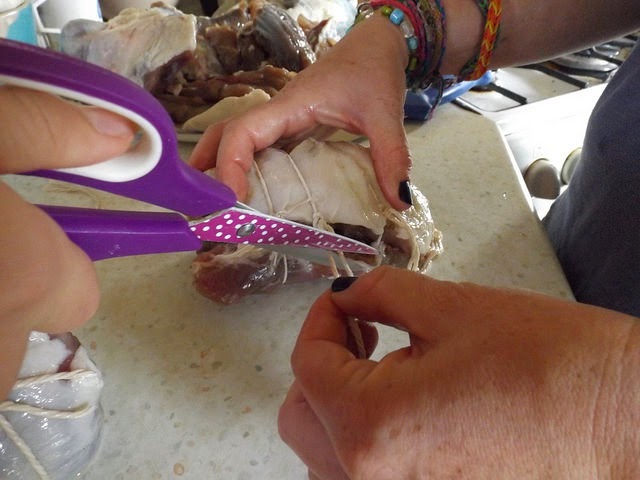 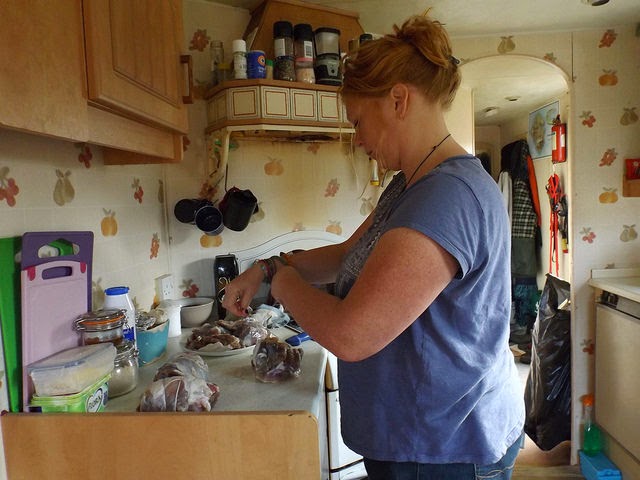 I can’t report on the flavour of the brine experiment yet but I can confirm the dry cured bacon was delicious – it needs a 10 minutes soak prior to cooking to remove a little of the salt as I was a bit heavy handed with the dry cure (again!) but we have had bacon sandwiches and cheese and bacon pasta bake already with this years supply. I suspect it will not last long!

Today we were flexing our learning muscles again and having defrosted the bags of meat destined for mince and for chorizo we spent several hours mincing, mixing and stuffing!

First – sausages. We were both trained in sausage making when we did our venison processing training but it was a brief session in the middle of the processing of a whole deer and there was more hilarity than sausage making as I recall! However one of our WWOOF hosts had been an excellent sausage maker and although he had not actually let us anywhere near the black magic art that is linking and twisting we had keenly observed and some of it must have rubbed off.

We minced the pork, then added sausage mix and water and minced it again. Then we loaded up the sausage maker and created one very long sausage! 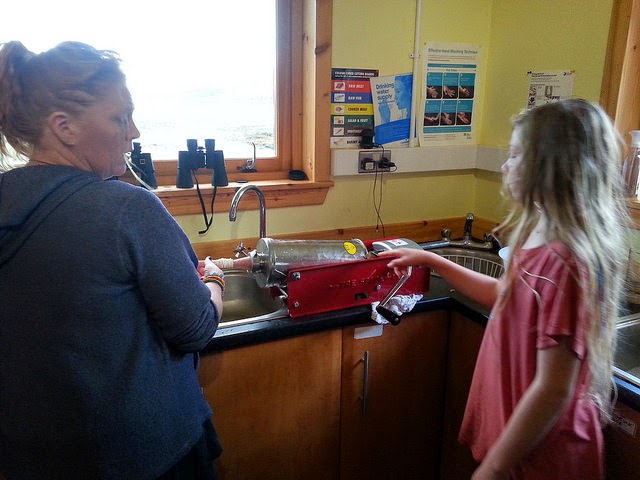 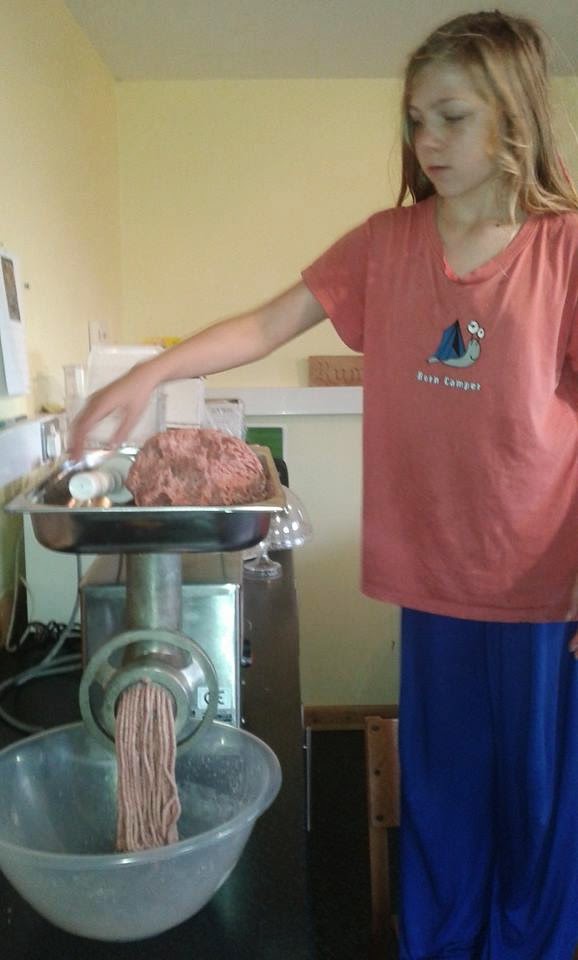 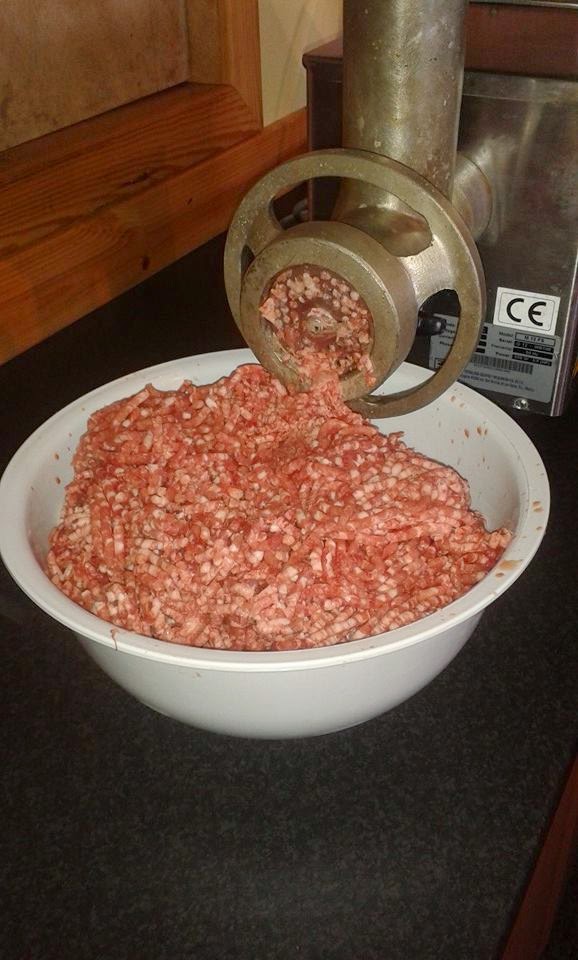 And then the moment of truth – word was out and we had quite a kitchen full of Rum folk popping by to watch, laugh and share their comments on our sausage technique. But I confess to being pretty darn proud of my efforts…

We  very much enjoyed sausages for dinner this evening. I can confirm they were delicious and won ‘best sausages ever’ status with empty plates all round. I would like to pretend it was all in the linking, Ady would like to take credit for his superb cooking of them. I think we are agreeing on it being a team effort!

Then to the salami / chorizo. As far as I can tell the difference is in the ingredients with chorizo being spicier. I am happy to be corrected though as it will be a long while before I get to be the Queen of Chorizo – these are still months away from being ready as they will be air drying til well into next year.

A controlled blend of lean pork and pork fat, some garlic, red wine, paprika and a 2% salt content all blended together made for a gorgeous smelling mix. We had a small amount of sausage skin left so made one small salami which will be our tester ready first. Then filled the five large salami casings and tied them off with our butchers string. 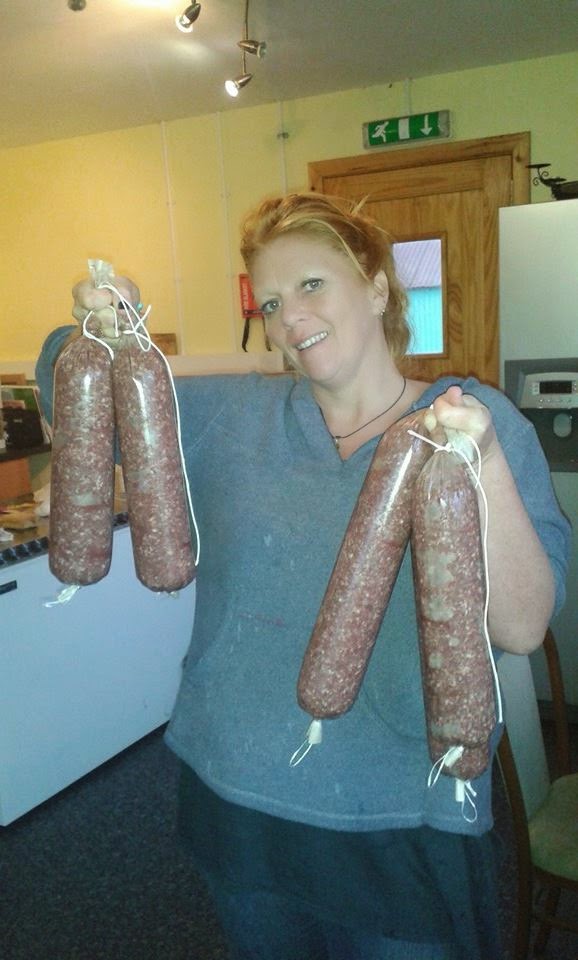 These need to air dried hanging up. They will get a coating of white mold on the outside and will shrink and shrivel and harden. I will update on progress on these as it happens.

Achievements like the slaughter, butchering and processing of the pigs number among some of my greatest life moments so far. This is the embodiment of our dream – the reason why we headed off on our first adventures WWOOFing in 2011 and why we took on Croft 3 and do the things we do. A desire to eat meat but to know it is of the highest possible quality, reared to the best possible welfare standards and having had the best, most natural life. Learning new skills, taking on challenges which even 5 years ago I would have sworn were far beyond us. I am so, so proud of our family for this. For Ady and I in stretching our talents and skills and being prepared to have a go and try, for the children in facing all of these lessons head on, being so keen to be involved and understand how things work, knowing their own personal limits and the bits that they can and can’t do. Davies has been amazing in getting bloodied up and close in the butchering side of the pigs – next time he wants to be there for the slaughter and I imagine in a few years he will be able to do that side of it himself. Scarlett is philosophical about it happening but does not want to be involved in that side of it but comes into her own in the processing – she would be able to wet and dry cure, make sausages and other produce next time quite comfortably.

I think the reason those sausages taste so great is due to many, many factors. The amazing quality of life and the humane respectful death of the animal. The knowledge that the meat is top quality as we know it’s full history – it’s natural diet, no medication, perfect health. Top quality organic additions in the way of sausage skin and added mix. But the secret ingredient is pride – and it tasted amazing!