Today Ady and I made sausages from the last two pigs we killed for eating. I’ve blogged before about our pig processing and how much we have learned. Seeing the whole process from breeding, birthing, rearing and killing the live animals, to the skinning, butchering and processing them. We have experimented with roasting joints, chops and diced meat. Used wet and dry cures to make bacon, created brine to make gammon, had an ill fated attempt at charcuterie products such as salami and chorizo and made sausages. Lots and lots of sausages.

Sausage making is time consuming and requires some kit and additional ingredients. Given our lack of power up here on the Croft as well as lack of indoor, sterile and spacious environment we have always hired out the village hall space to make our sausages and made use of the community owned mincer and sausage machine. We did have a small hand crank mincer but it was a pale imitation version of the heavy duty ones from our grandparents days. We do have a small electric mincer with sausage stuffer attachment so in times to come when we are not processing an entire pigs worth of sausages at a time we will likely still experiment with our own blends of herbs, spices and flavourings and have another go at some of the more ambitious ideas which require certain specific conditions to work in or finish off in.

As a child of the ’70s I have a much clearer recollection than Davies and Scarlett of butchers shops on the high street with strings of sausages hanging from hooks rather than pre-packaged polystyrene trays in the supermarket. We did patronise our local butcher surviving against the odds in Sussex but I think even he probably bought in his sausages rather than making them. I remember the hilarious attempts of contestants on The Generation Game trying to turn a huge stuffed sausage skin into a string of linked sausages. When we were WWOOFing we stayed with a farmer who had been butcher trained and could do an impressive link of sausages which the rest of us were only able to observe and vacuum pack as it was quite a skill. Ady and I joined fellow islanders in our first year here on a venison processing course though and while Ady retained far greater knowledge of the various cuts and butchering skills I have been deemed the Sausage Queen and am the one responsible for stuffing and twirling the sausages to turn them from one giant two metre long length to something while maybe not quite worthy of hanging outside a butchers shop certainly recognisable as a string of sausages. 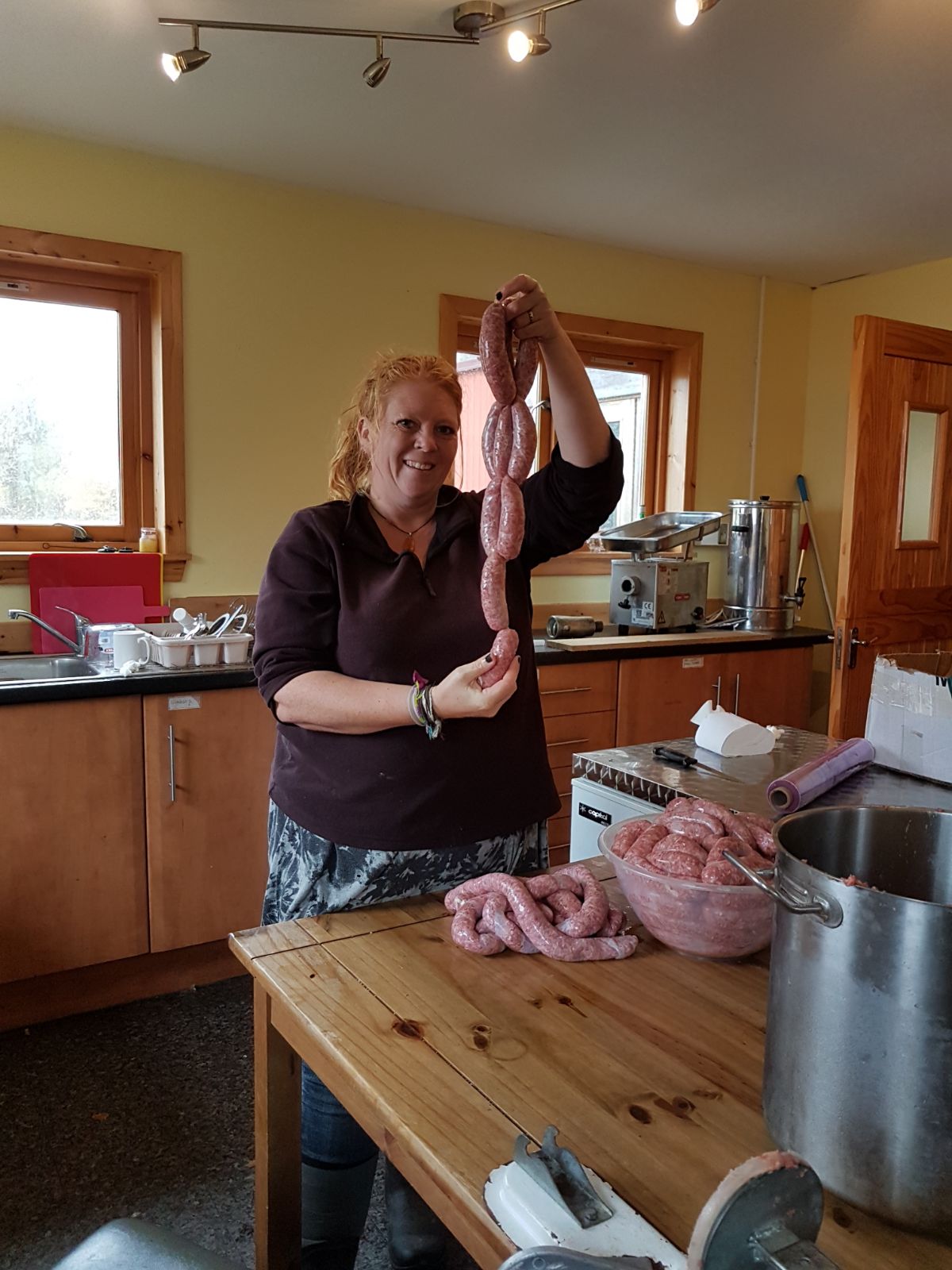 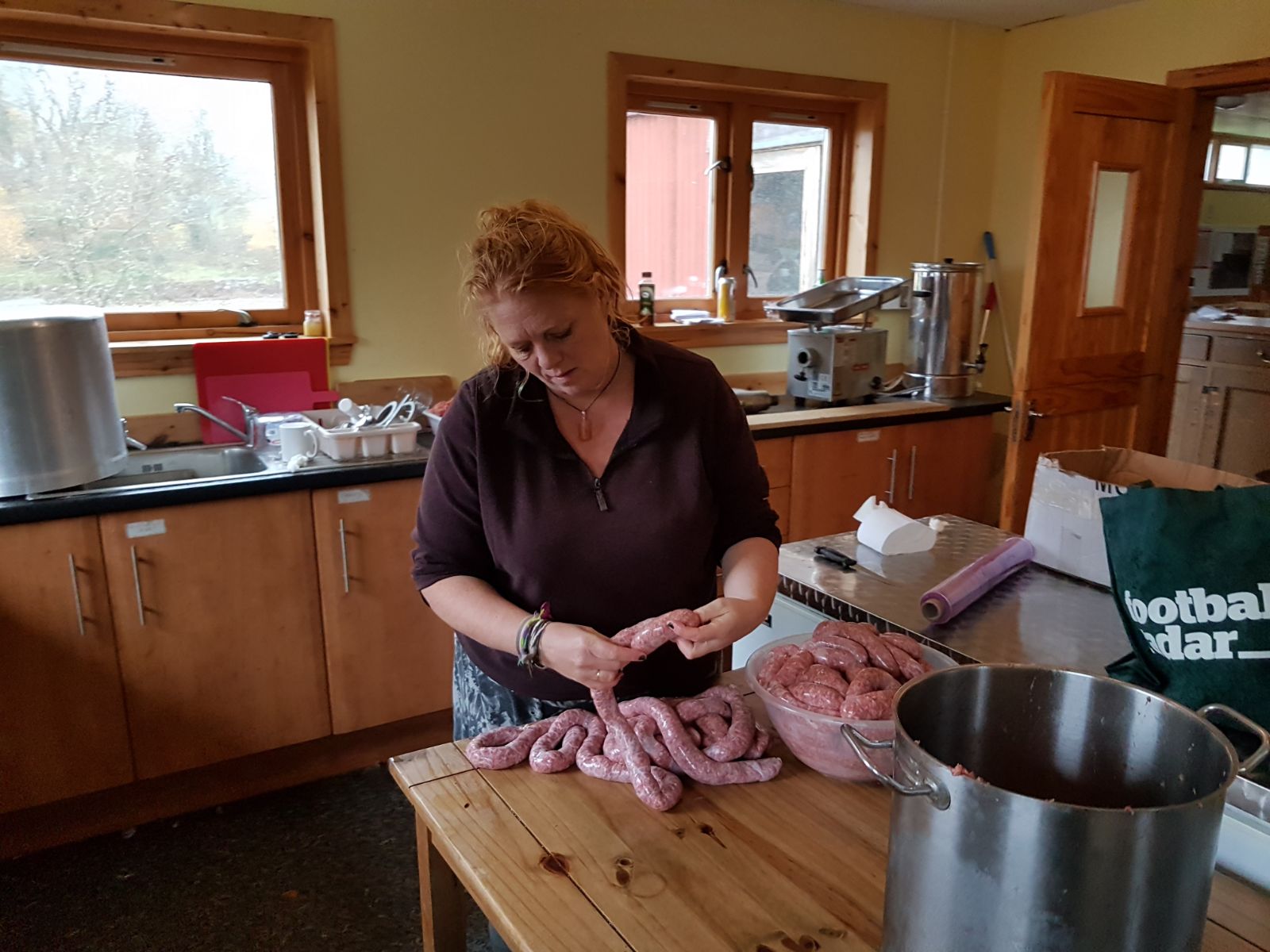 Sausages are something of an art, not just in the actual stuffing and linking but in the preparation of the sausage meat itself. The meat is best minced and processed very cold, if it’s not quite defrosted so much the better, which works well for us as the village hall is not being used to run a seasonal teashop during the winter and we usually kill our pigs in the autumn so we just need to work out the optimum timing for taking the bags full of chopped up meat out of the freezer to ensure it is defrosted but not too much. Previously we have erred on the side of not enough time and been hacking at raw pork ice lollies to get chunks off to mince. This time we allowed 48 hours and had frozen it in smaller quantities which turned out pretty much perfect. There is a huge array of choices available for herb, spice and flavour seasoning options and then whether to add rusk or not. After lots of experimentation our preference is for a fairly herby but not too spicy blend. This time I messed up by managing to order the correct seasoning blend but the seasoning only rather than the actual mix including rusk. D’oh! Cue some hurried purchasing of stuffing and sausage mix to aid in the bulking out. We could have gone with all meat and the sausages would have been fine but rather dense compared to our personal preference.

Then once you have minced the meat, added the seasoning and rusk and water and re-minced it to fully blend comes the stuffing. We use bought skins (again not having the facilities to process our livestock sufficiently to get intestines to use) which need to be soaked in water to remove the salt coating used to preserve them. I have yet to get right the amount I buy either ending up with too many or too few. Today was a too few day and we only ended up with enough for about a third of the sausage meat we had. So 150 sausages made and enough sausage meat bagged up into the right sized portions for sausages for the four of us for another 300 sausages in the freezer.

Either way I am delighted that not only will we be dining this evening on sausages made by us from pigs we bred here on Croft 3 but that there was a brief moment today with nearly 5 foot of sausages dangling below me when I could have hung them on that hook outside a butchers shop on the high street of my childhood and they would not have looked out of place.