So we have a plan. Get a campervan, rent out the house and head off WWOOFing for a year. Next we need to work on all the many details, logistics and planning that turn that simple sentence into a reality. We need a schedule, a clipboard, a big map of the UK, maybe some stickers and a pointy stick for gesturing with. Possibly even wipe clean joblists and at the very least a spread sheet or seven.

Fortunately within our arsenal of skills and qualities we have Nic who is pretty good at masterminding who should be doing what when and drawing their attention to it. Some might call me organised, some might be less kind and call me bossy, some might be upfront and honest and call me controlling ;). But A provided me with the map, I already had a cute little pink notepad just waiting for something I actually needed to write notes about so rubbing my hands with glee at the prospect of controlling to be done I was off!

Timing is everything in a plan like this – too soon to clear the house of everything and we’ll have nowhere to sleep, too quick finding tennants and they’ll have nowhere to sleep either – too late and we don’t get our mortgage paid by nice friendly housesitting folks. Leave the arranging places to stay too late and we end up homeless and hungry – and those friendly housesitting folk might not take to kindly to their landlords pressing our noses up against the windows looking longingly at their dinner.

First port of call had to be joining WWOOF – £30 for instant online access to the hosts. This needed to be invested so we could have a proper look at potential hosts and see if there really are enough places in the UK to find homes for the whole year.

Once done we then needed to hone our search for hosts a little. We decided to limit it initially to all hosts who will accept children by arrangement. This came back with 198 hits so we set about reading them all out and all having a yes or no vote. It was a bit like Britain’s Got Talent, particularly when we found intentional communities who like to celebrate the turning of the Earth and the phases of the moon by dancing round a campfire. A vetoed that one! We tended to strike off anyone with strict religious or vegan leanings, simply because we have neither (infact quite the oppposite) so felt we would not be their ideal guests and would not learn the sort of skills we want to gain either. If we had a bigger timeframe we may well toss the odd challenging potential host in just to give us a shake up as I think spending time with people who are blatantly different to you is a really healthy thing to do but this voyage has enough challenges and experiences already.

This brought us to a short (ha!) list of 107 hosts. Bearing in mind the recoomendation is to arrange a one week stay initially that gaves us sufficient hosts for two years so it needed further honing. Our next stage was to plot them all on a map and see what pattern emerged. This was good for my geography and created an interesting pattern, looked pretty and fulfilled all sorts of ‘next we’ll conquer this settlement’ type fantasies for me (see, told you I was controlling!). 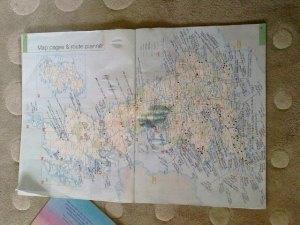 This gave us a very logical path to follow round the UK for our year. We decided to go clockwise which takes us into the South West for the start of our journey. We had a big concentration (30 plus) of hosts in that area and wanted to cover it in the first 3 months so needed to bring it to less than half. A second read through of those hosts brought up our favourite 15 all of whom we wrote an individial email to explaining what we like the sound of about them and when we’d like to come and visit. We’re calling this Zone One. Once Zone One is all arranged we’ll move onto arranging Zone Two (North Wales) by the same process for June, July and August. Zone Three (Scotland) will be autumn into winter which fits perfectly with my desire to see the Northern Lights which are visible from Scotland at that time of year. That takes us to December at which point we’ll be at our furthest point from home and will take a couple of weeks travelling back down the country again maybe doing some shorter stays with WWOOF hosts, visiting friends, possibly taking a youth hostel holiday before arriving at my parents for Christmas.

Our final couple of months, January and February will be spent closer to home in Kent, Sussex, Suffolk and Essex hopefully, where it will be slightly milder and then our year will draw to a close with us making decisions about what happens next.

5 thoughts on “Making It Happen”