Here on Rum we are noticing the onset of autumn. The days are shortening at the beginning and end by several minutes daily. The temperature has dropped and we have the woodburner lit morning and evening now, often through the day aswell if we are indoors because it is wet outside. We have our heavy winter duvet and brushed cotton bedding on the bed and the window vacuum is working overtime on all the condensation on the windows.

It’s a peaceful, mellow, nature-driven transition from one season to the next. Definitely one of the aspects of our life here that I love the most – how we adjust our daily rhythm along with nature and naturally seem to sleep for longer in the mornings, turn toward indoor activities and slow down a little along with the outside world.

But this time last week Davies and I were preparing for a micro-mainland adventure as we went all the way from Rum to Worthing, Sussex. My parents have very generously gifted us a car and so we went to collect it from them and drive it back up to Rum. After lots of research we decided the best way to get down to Sussex was by a bus / coach, with ferry and train journey either side. We did manage to catch a lift on the charter boat taking some contractors who are currently working on Rum back to the mainland, so our trip began with a slightly bumpy but fast ride back to Mallaig. Cup of tea and chocolate biscuit complementary! 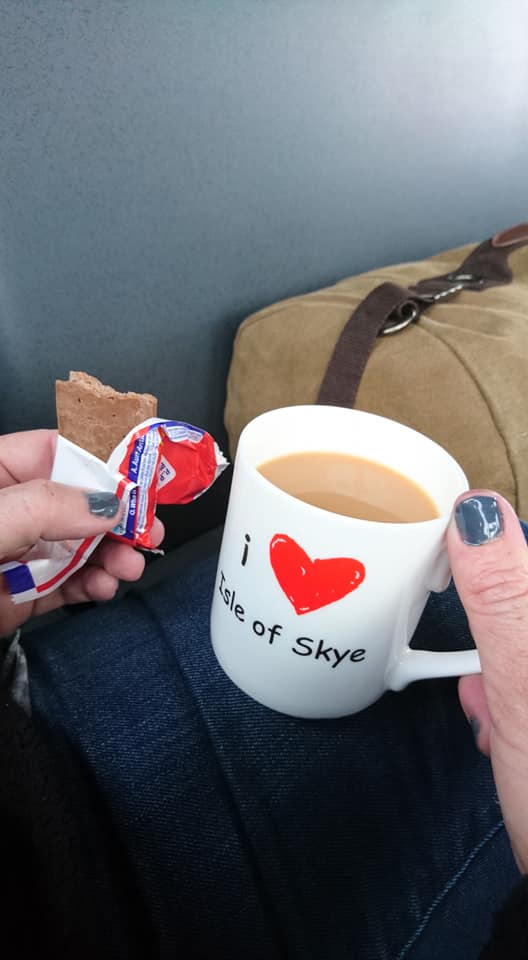 We then had an hour or so to wait for the train taking us from Mallaig to Fort William. We had originally planned to come off Rum the following day when the five hour ferry, followed by the 90 minute train journey would get us there in time to catch an evening bus, thus saving on any overnight accommodation but the weather was looking bad and the ferry was on high alert for disruption so we chose to come off earlier and spent the night in Fort William.

We had an ill fated fast food meal (which was neither fast not quite what we had ordered but as we’d already taken it back to our hotel room neither of us could face going back out to take it back so we ate what we were given!), watched some hotel telly and had a restless night with the anxiety of a full day of travelling ahead and the worry of oversleeping and missing our bus keeping us awake.

Which meant that at 630am we were already waiting at the bus stop when the bus arrived. Neither Davies or I are particularly morning-y people but the promise of an air conditioned, wifi enabled comfy bus trip had us feeling at least it would be a restful, if lengthy day ahead. 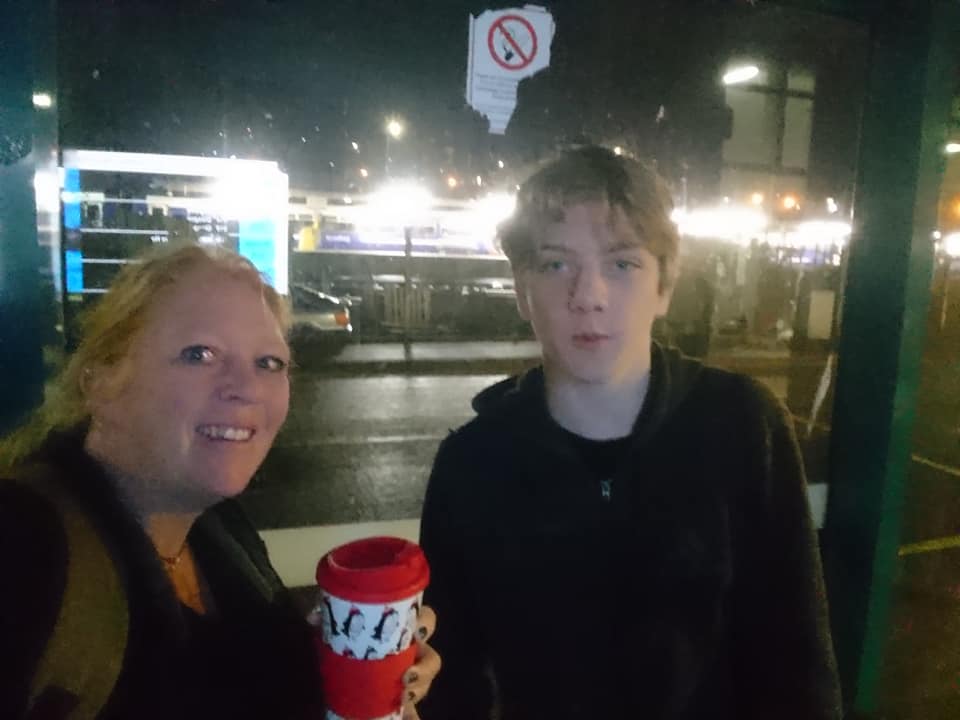 It was a bad start when the driver informed me I was not allowed to bring my (very securely lidded) mug of hot tea on board. I’d not actually had any of my tea yet so I got Davies to pour it away for me, I think I would have cried to do it myself… The first leg of the trip from Fort William to Glasgow was otherwise uneventful though with the sunrise drive through Glen Coe particularly lovely. 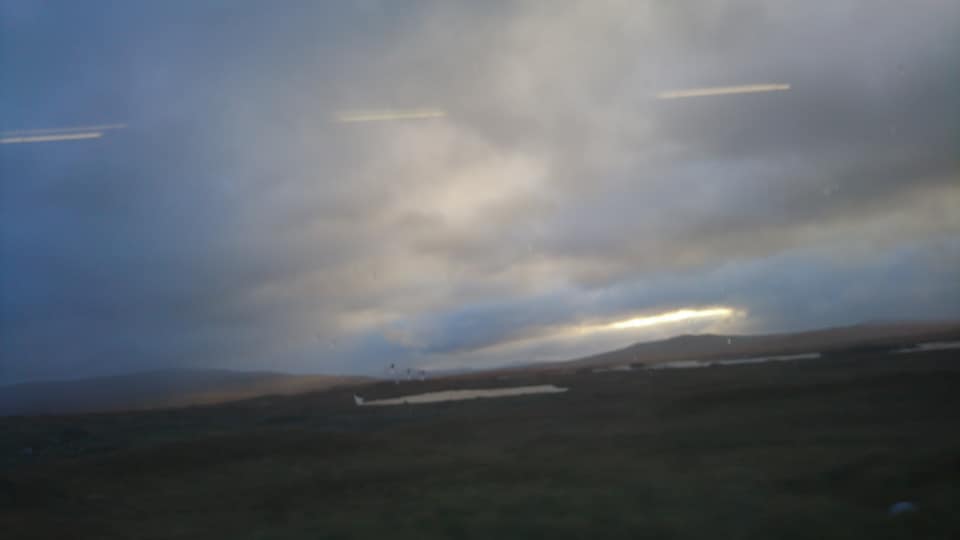 And then at Glasgow, having queued for a good 15 minutes, there was tea! Lovely tea. Davies had another ill fated food experience of a bacon roll which had been buttered, it would not even have occurred to me to ask for it not to have been and neither of us could face the queue again, or the queue-jumping implications to take it back. Instead we gratefully drank our hot drinks and made our way to the next bus for the onward journey.

This was the longest leg of the trip – 11am start, 930pm intended arrival. Our fellow passengers appeared largely nice enough although the man who sat directly in front of us did spend his entire time on board sniffing very loudly and clearing his throat noisily, which was not charming the first time and was very grating indeed four hours in to the trip. The couple across the aisle from us had adhered to the no hot drinks rule but had bought a particularly rich selection of picnic food which was all very smelly. This turned out to be the least of their anti social behaviour though. Over the course of the trip various passengers got on and off the bus, in fact i think it was just Davies and I and the smelly picnic couple who were on the bus for the duration. We had people behind and in front  of us at various points who snored loudly, had very loud conversations on their phones, listened to music on headphones that were at loud enough volume for us to hear every song lyric, got off the bus at various stops to have a cigarette but in fear of the bus going without them stood on the steps keeping the door open while smoking so that all of the smoke blew back into the bus and were then abusive to the driver who asked them not to do that. We had an unplanned detour to collect some people from a city stop along the way who had been stranded by a cancelled bus and when this was announced over the tannoy the smelly picnic couple, who had been getting increasingly louder and more foul mouthed as the trip continued expressed their dissatisfaction with this very vocally to the driver, first by shouting down the bus, then by going to the front and haranguing the driver (while was driving a bus full of people at about 70mph on a motorway) and then by shouting some more and exchanging insults and swear words with the driver who delivered his side of the argument over the loud speaker for the whole bus to enjoy.

Meanwhile the toilet had become blocked about half way into the journey, meaning the aroma of the collected bodily fluids of a bus full of people during a 10 hour trip were competing with the smell of spicy picnic food still lingering in the air, along with stale cigarette smoke. Just before we arrived in London a rather irate young woman used the toilet, managed to get some of the contents on her clothing and shared her dissatisfaction with this by addressing the entire bus with a torrent of abuse. It would seem churlish to mention that the plug points didn’t work on our seats or any of the seats around us after all of this drama, but they didn’t.

Arriving at Victoria, walking to the train station, collecting our train tickets, waiting for and then boarding the train for the final 90 minutes of our trip felt like freedom and relief – emotions  I honestly wouldn’t have expected to be experiencing at 1030pm on a Saturday night, some 15 hours after leaving Fort William. But the high spirited middle aged drunk men sharing our carriage and the giggly hen party sat across from us felt like safe old friends in comparison to our bus companions. 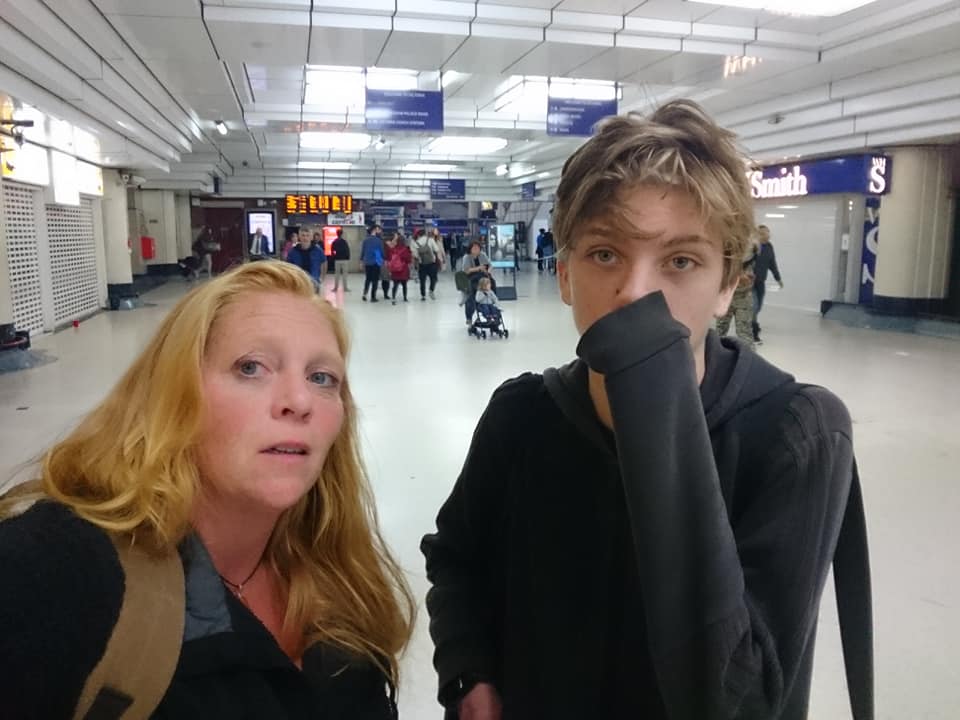 And then my parents collected us from the station and took us back to their house for food and drink and a comfortable bed and the bus adventures went from an unpleasant experience to a never to be repeated but funny in the re-telling story. The conclusion definitely being Never Again.

It was a brief visit of just a couple of nights with Mum & Dad. Long enough to snatch a quick meet up with friends, 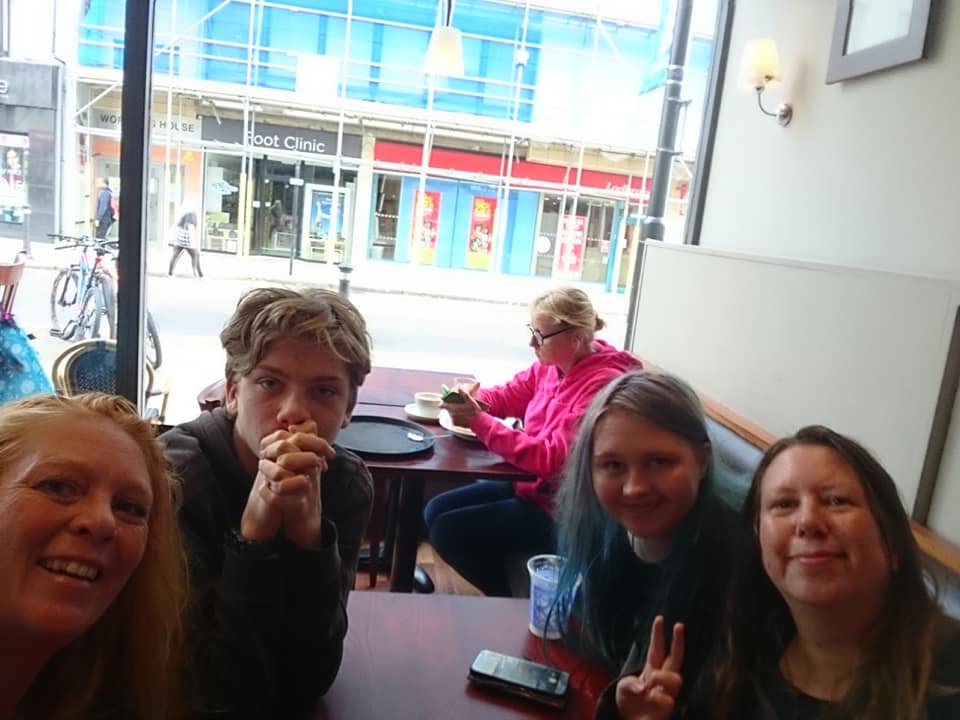 a shopping trip to buy a proper winter coat for Davies, a lovely meal out with Mum & Dad, 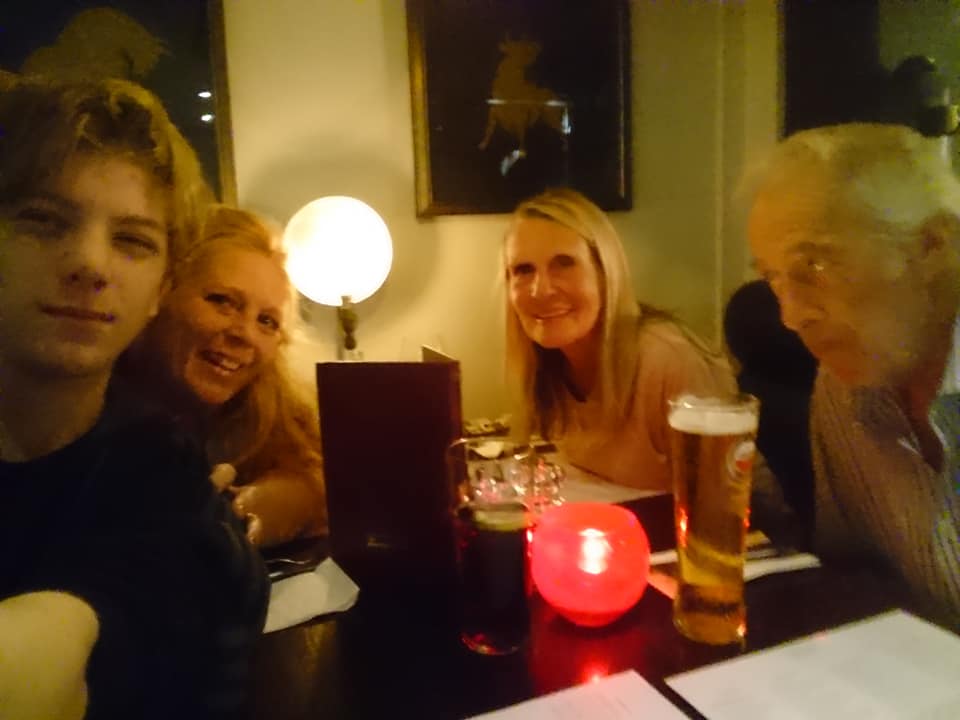 A supermarket shop for Davies and I where we got to play with the latest technology in scanning your own trolley as you put the shopping in (we live in the future!), 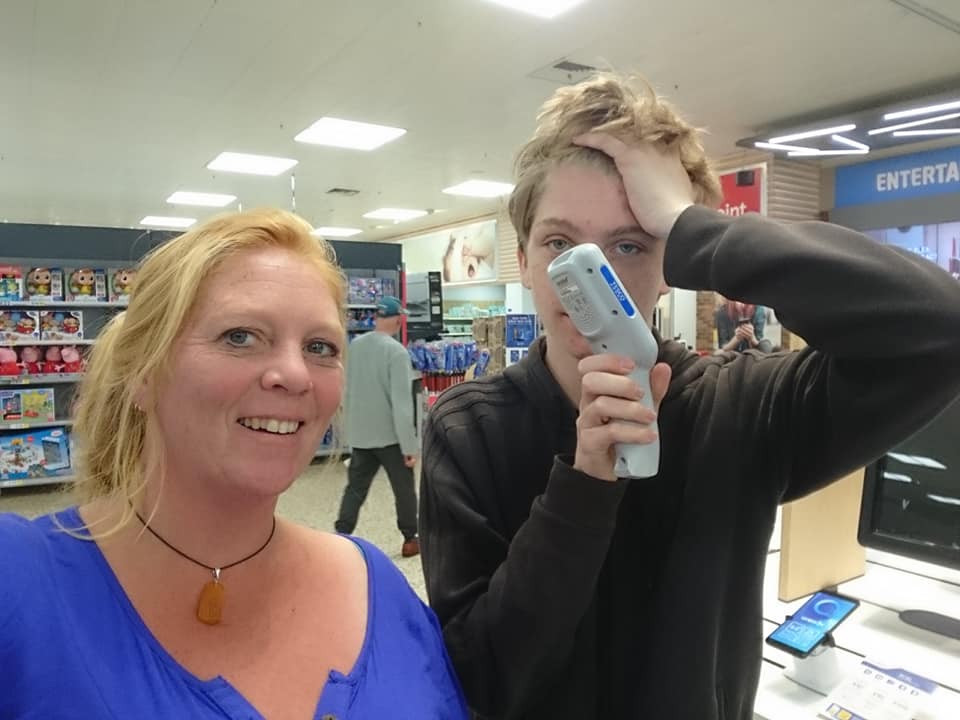 and a catch up with my brother and nephew. Then it was back up the country again. This time under our own steam in the lovely new car. A rather more relaxing experience, definitely quicker and with no swearing at all (not even me – all fellow road users were on best behaviour!). We stopped just three times – once for a wee, once for some food and petrol and once for a final whizz round the supermarkets of Fort William for fresh food before ending our day parked in Mallaig overlooking Rum. 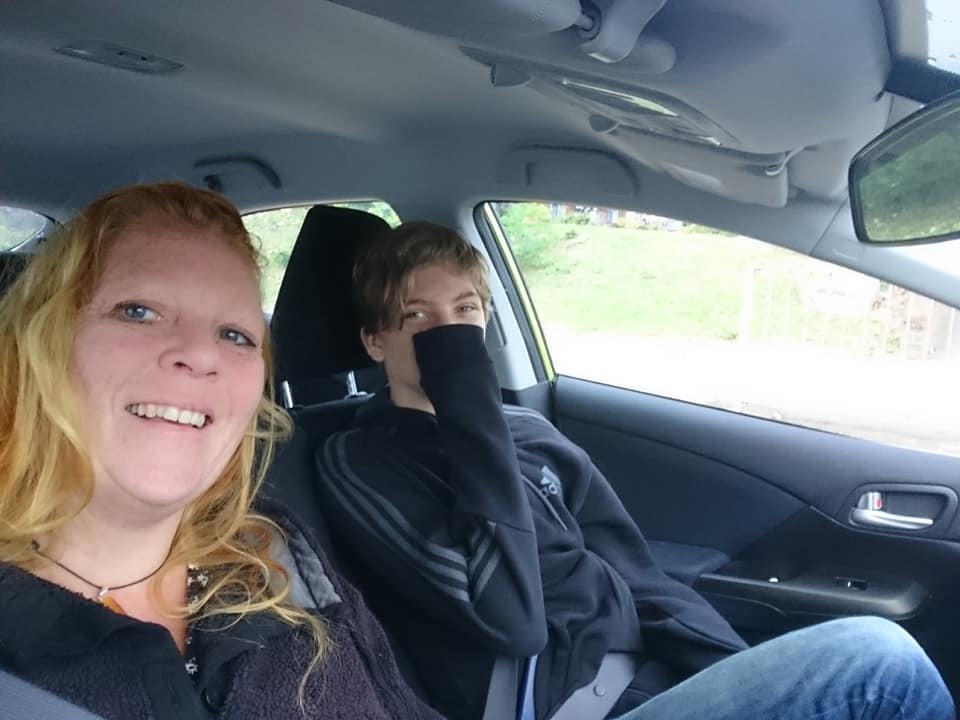 This time we hit Glen Coe at sunset. I don’t remember the last time I went through that area outside of crepuscular times! 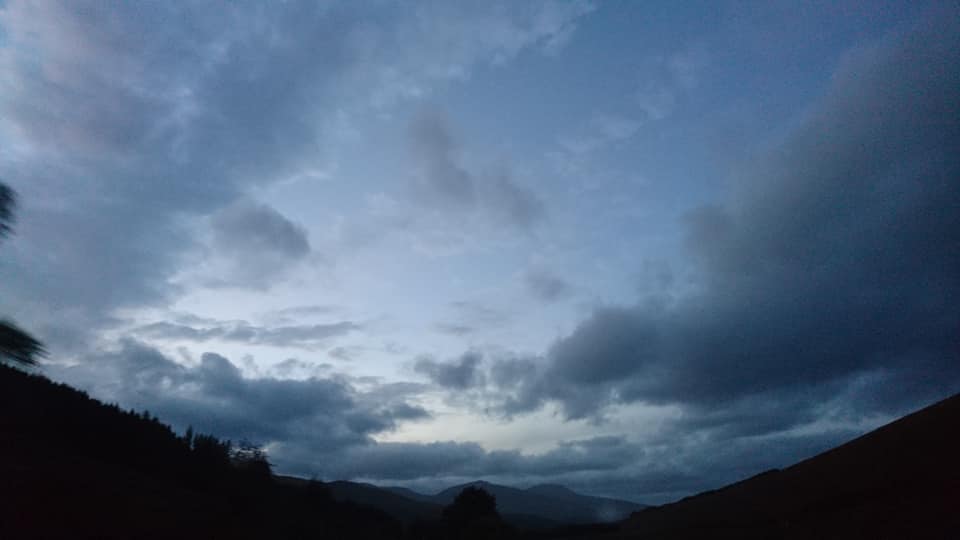 We managed a few hours sleep in the car, having packed pillows and blankets for just that purpose before boarding the ferry home. 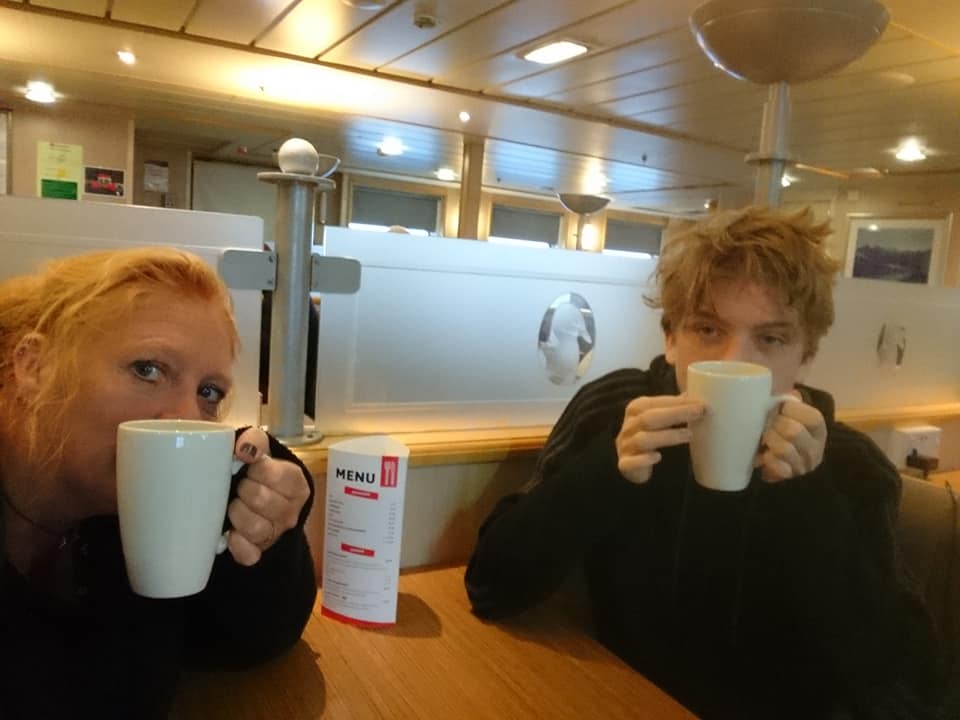 The final, final leg of the trip was wheelbarrows back up to the croft with the shopping we’d bought back. 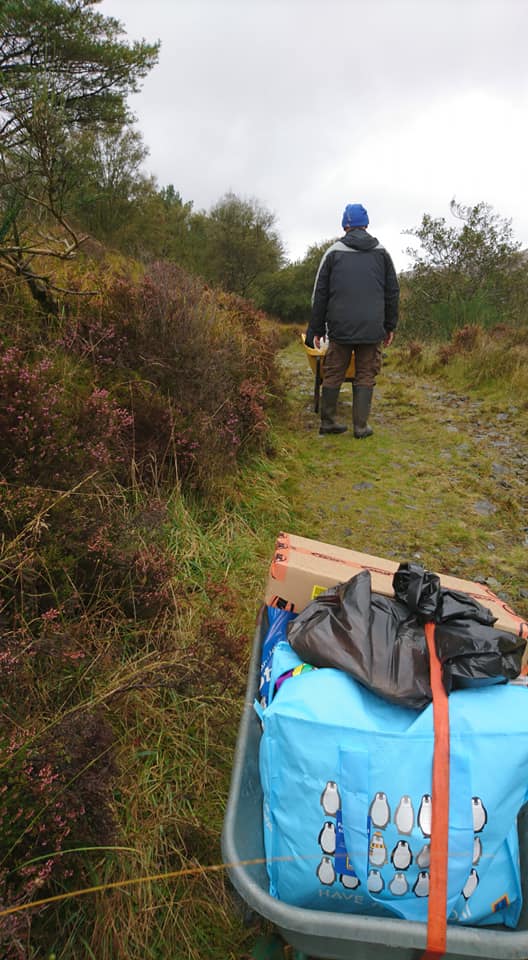 While we were off it felt like we’d been away for ages. Within a few hours of being back it felt as though we’d never been away. The mainland often feels a bit like Bagpuss to me, I can’t quite believe it’s all still there being as busy and filled with life and people and chaos when I’m not looking at it. In my head it all slows down as the ferry pulls away back to Rum and by the time I step off the boat it has all stopped behind me until the next time I come back.

Sitting on a bus with as many people as live on Rum, in a coffee shop or restaurant hearing snippets of all those conversations and lives being lived around me, feeling the tension of the busyness of people’s lives and how easy it is to lose your temper, to behave badly and how that can impact so heavily on those around you even if you have not noticed them or even been aware they are there. Also experiencing the joy of friendship, of families, of the stopping and chatting, sharing a smile or a laugh with someone and how it can lift both of your days even if just for a fleeting moment. That bus trip was people at their worst – frustrated, uncomfortable, inconvenienced, tired or hungry, caffeine or nicotine or alcohol deprived, people who were late for something or otherwise pressured, people who were tired or trying to shut the rest of the world out – none of us behave at our best in that environment. A few years ago I was one of those people, I know I have behaved badly in similar circumstances, lashing out at strangers with rudeness or aggression or selfish acts or just being thoughtless and unaware of who was around me and what impact my actions may have on them. Life in a small community, living in such close quarters with my little family has certainly taught me a lot about how we behave and how it affects those around us, this trip offered a lot to think about. And some ideal fodder for Davies’ studies in social science!