Our first Rum Christmas. Managing to sum up all that our life has been thus far on Rum in just these few days over the festive period. New friends, extreme weather, off grid, low impact, low consumerism living, amazing views, our close little family unit cosy and warm and mopping up constant condensation!

Christmas Eve was lovely. Dragon and Star spent a couple of hours doing a treasure hunt all around the croft and surrounding area that our lovely Rum friend Vikki had organised for them as a Christmas present.

We met the boat which brought us a pile of Christmas cards and the very last present I’d been hoping might arrive, we met up with various people for mulled wine and mince pies at the village hall, we tracked Santa on google earth and then we came home. We had venison steak for dinner and watched festive TV on the laptop while I iced the Christmas cake. Traditional Christmas Eve pressie of new pjs and then we attempted an early night for Dragon and Star which was probably as successful as every other parent the world over attempting early Christmas Eve nights for their children! We started a new Christmas Eve tradition of bacon sandwiches post midnight and finally went to bed around 2am. 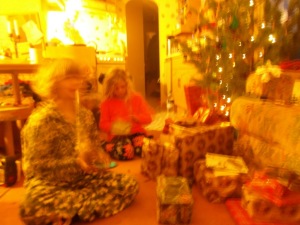 The day was spent listening to the radio, putting together lego, playmobile, looking at books, exploring new gadgets, sticking new glow in the dark stars onto bedroom ceilings, wearing new T shirts and socks, eating chocolate and twiglets. Ady cooked a HUGE turkey (it’s done another three dinners so far!), we spoke to family on the phone, watched various Christmas specials on TV (Top of the Pops made us feel old – we only knew about two of the songs and Robbie Williams looked like someone’s dad instead of a former boy band pin up star!). I had a plan of a new tradition of leisurely feeding the croft animals and surveying our land but it was bitterly cold so instead I lobbed food at them and dashed back inside quick!

Genuinely early nights all round.

Boxing Day was a late start, we had a walk on the beach around Loch Scresort to blow away some cobwebs and work off some of the chocolate.

The following day we went to Kilmory – one of the beaches on the other side of the island. It’s walkable (a 10 mile round trip), we did it twice earlier in the year but we drove this time in order to have longer at the beach. It was bitter – it actually snowed on the beach which is pretty unusual, seeing snow fall on sand is always a bit odd. Dragon and Star played chase the waves, Bonnie mostly barked at the sea, Ady and I had a cup of tea laced with brandy and once no one could feel their fingers, toes or noses any more we came home. A couple of hours had been long enough for snow to cover the peaks including the hills behind the croft which we’ve not seen snow on before. Very exciting, but sadly heavy rain saw it all melt away overnight.

Today has been about preparing for stormy weather. We are currently having winds of in excess of 70mph and for the first time I actually have packed a bag incase we need to do a moonlit dash to safety down in the village. We were offered beds in various houses but would rather see it out up here in the static if we can. Our friend Sandy and Ady lashed the roof with some straps which has indeed preventing some of the roof rattles but is now creating a vibration noise which sounds like whale song. I envisage a whole pod of cetaceans circling the island in response to whatever it is saying!