A slow week on the cob project due to 101 other things happening around the croft and here on Rum. Meetings, work, newsletters, emails, off-croft responsibilities. Our flushing compost loo is still proving tricky and requiring rather a lot more maintenance than we’d first hoped. We have been drawing up plans of Base Camp for volunteers which is now on this years to-do list. Our current volunteer managed to have an accident while off walking in the hills last weekend and his injuries, while not serious have prevented him from working for us too. Set backs, always set backs.

When we moved here we decided that we would only accept the compromises and challenges that our life sometimes requires of us if we could offset them against freedom to relax, enjoy life here and make the most of Rum. One of the ways we ensure we do that during the summer months is the weekly Sheerwater boat trip every Thursday. It often means the whole of Thursday gets utterly disrupted as it is four hours away from the croft right in the middle of the day but it is the sort of trip we used to travel miles and miles and spend a fortune to do in our old lives and here it is right on our doorstep. The wildlife encounters we have had on those weekly trips have been highlights of our time here on Rum and our lives generally and now into our fourth year of heading out to the Isle of Soay this year is already proving no exception. This week we saw dolphins, porpoise, a minke whale and loads of sea birds. It is very therapeutic to be out on the ocean, leaving Rum to get the perspective of our island, looming and large as it is against the other Small Isles but still just an island, in the middle of an ocean. All of the joy of time off Rum without any of the stress of needing to arrive anywhere else other than back on Rum again two hours later! The visibility yesterday was stunning, the sea was like a mirror, we could see the outer Hebrides with South Uist to the west and the snow capped tip of Ben Nevis to the east, many miles away from each other.

On Wednesday it was Ady’s birthday – his fourth here on Rum. We drove across to Harris and had a barbecue on the beach, gathering driftwood to make a fire, cooking sausages and onions, having a beer in the sunshine. Last year we went and forgot to take the sausages – this year we remembered them but I forgot to pack the bag of marshmallows I had earmarked to toast over the fire. Ah well. The waves were crashing on the rocks and Davies and Scarlett enjoyed playing chicken with them, getting utterly drenched in the process. No one ever wins against the sea! We did some beachcombing and returned as we always do from Harris with a car full of washed up ‘treasure’. This time it was some black pipe which we plan to construct a mini polytunnel with, some fish boxes to grow seeds in, some buoys, some rope. The beach gets a little bit less litter and we get some useful bits and pieces for the croft. 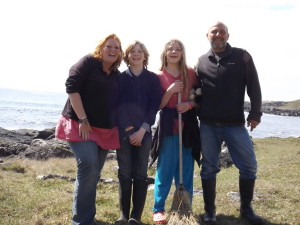 Later we took a huge chocolate cake down to the shop to share – pretty much all of Rum came out for a beer or two, some cake and singing. It was a lovely evening. 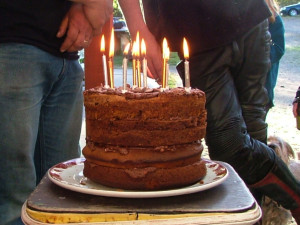 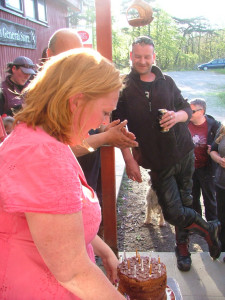 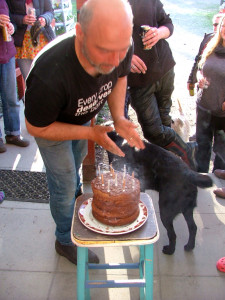