It’s been a while since I mentioned an anniversary. Regular readers will know I do love a good anniversary – a reason to get a bit misty eyed and nostalgic. Today was Ady & my sixteenth wedding anniversary. We celebrate two anniversaries each year (obviously!) – one is marking when we became a couple, which was 22 years back in June. The other is our marriage – 16 years today.

As with so many of our life choices our wedding was not conventional. As neither of us are religious or terribly fussed with tradition and had been together for 6 years already when we decided to get married – mostly because we were planning to start a family, we didn’t go about it in the usual way. Several friends and work colleagues had gotten married that summer and we had attended weddings happy to celebrate people having their special day and declaring their love for each other forever but knowing that this was not the right way for us. We didn’t want expense, speeches, practise runs at the hairdresser, dieting to get into our outfits, fretting over guest lists and menus and venues. Instead we decided, three weeks before we did it that we’d fly to Las Vegas and get married in a wedding chapel. We told my parents who were able to come with us, along with my brother. My Granny paid for my dress (selected during my one hour lunchbreak at work when I dashed along, tried it on, decided it was right and bought it) and for Ady’s tux hire in Vegas (no point in buying one, he’d never wear it again). My wedding ring was my other grandmothers, Ady’s we bought. Our reception was at a pub, closed for the evening for our party with the cake and buffet organised by workmates.

The wedding day itself was perfect. We had inadvertently chosen the most popular day of the year to get married 09/09/99 so only 2 slots were available at the chapel – 830am or 1130pm. We went for the 830am slot and so were pronounced Mr & Mrs Goddard at 9am. We then flew to the floor of the Grand Canyon in a helicopter for a champagne lunch and spent the afternoon wandering around the crazy hotels of Vegas, getting our photo taken with a lion cub and looking at each other in disbelief that we were now married. It was fantastic and so very us.

Yesterday we celebrated a fellow Rum resident’s birthday and had the first meeting of our newly set up Rum Whisky Club. This morning we were on the slightly woolly side a result but we did harvest potatoes, open the fruit cage up to the chickens and ducks as all of the fruiting is over so they can go and eat the bugs, caterpillars and do some weeding in there fore us before we gather seaweed for a mulch. 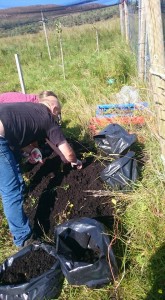 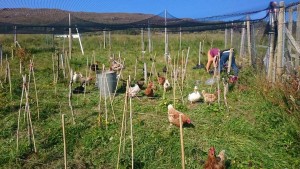 Scarlett and I went bramble picking and had an hour on the beach. It was such a lovely afternoon I even got a little sunburnt! Back at home I made more jam, this time bramble and rosemary. 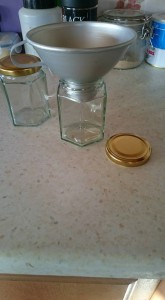 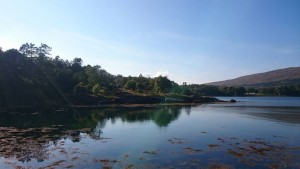 Ady and I have done some more amateur mechanics on the car and hopefully should have a new car battery arriving later this week. Fingers crossed we will have fixed the car and have it running again.

Tonight the stars are amazing and the northern lights are dancing across the night sky. Sixteen years ago Ady and I promised each other many things – a family, a lifetime of love and laughter, sunshine and moonlight, happiness and adventure. I think we’ve both made good on those promises so far.

3 thoughts on “Anniversaries and jam”