A big thing on our list was rearing our own meat. As confirmed carnivores (we may err more towards the omnivore category these days than we used to but we still have meat or fish pretty much every day in some form) but with high ideals of animal welfare we knew that the only possible compromise (and it is still a compromise, I accept that and will ever have a massive amount of respect and admiration for my vegan friends, however much I love bacon!) is to rear as much of the meat in our diets ourselves. This week four of the dinners we’ll eat will be Rum venison, Croft 3 chicken, Croft 3 pork or caught of the coast of Rum mackerel. Today for lunch I had Croft 3 foraged Rum bramble jam and our cakes, pancakes and egg based meals are all using our own Croft 3 eggs too. I still season lots of our cooking with dried herbs grown here from seed last year and the first salad of the season won’t be too far away.

We’re pretty proud of that.

For the last few weeks we’ve been observing our chickens. From an inital stock of 10 hens and a cockerel we now have a flock of over 40. Some were bred here from our starting birds, some were rehomed from a friend in the village. Last years chicks have slow grown and hit maturity so we have had the first eggs from hens and the cockerels have been starting to find their crowing voices, sparring with each other and mating with the hens. The crowing is fine. I like the noise of cocks growing and we have no neighbours to disturb. But the fighting between themselves is not great and the poor hens were starting to look a bit hunted – every time they sat down they were getting leapt on from behind by one cockerel or another.

So over the last couple of days Ady and I have been watching and picking out the ones we want to keep. The rehomed bantam cock from the village gets to stay – he is father to lots of the young ‘uns and is a nice natured, friendly to people cockerel. He handles Bonnie well and keeps the flock in order. Next on the safe list is a mini- Dave, the original cockerel who died over the winter had a son who looks just like him so he gets to stay. Two of the cocks match hens really nicely – a buff coloured one who has hung out with one of the prettier hens since they were tiny chicks and is always to be found with her still. There is a black and white speckledy boy who has a gaggle of about four matching hens and is very pretty so he gets to stay. There is a brown and black cock who hangs around up near us whenever we are our working on the croft. He can stay. That left eight cocks to kill.

So Ady and I went down and spent time this morning feeding them and doing the deed. We got six of the eight – the two who got away eluded us this time but will be for the pot in the next few weeks. We do the deed with respect, kindness, minimum disruption to all of the rest of the birds. We both plucked, Ady gutted and by lunchtime we had six oven ready birds. Four for the freezer and two for our dinner this evening.

They are small, very lean and browner meat than supermarket birds. The flavour is more gamey than bland and is perfect for curries, casseroles and similar but tonight we just roasted them.

Also high on our list of experiences was seeing various sights – wildlife such as golden eagles, red deer, otters, whales – all of which we see regularly here on Rum. And the Northern Lights – an ambition of mine since I was a girl, now shared by the other three. We came close various times while traveling and often slept with the curtains open in the campervan just in case. I’m signed up to text and email alerts and have stayed up late on several occasions in the hopes of a glimpse. But to no avail. Until tonight that is.

It was the kids bedtime when a text and an email came through from two different friends and Ady glanced at the news website to see the aurora was visible in various parts of the UK so we opened the curtains and sure enough there they were! We all put coats and wellies on over pjs and crowded outside onto the pallets to watch the ripples and dancing lights. The colours were not as vivid as I have seen in photos, pale green and pale pinkish but undeniably the northern lights dancing across the sky above our croft.

We watched until they began to fade and we began to shiver so came inside. The kids to watch from their beds and me to sit on the sofa and carry on watching. It clouded over and went pitch dark outside but is now starting to clear again so I will sit awhile longer and hope they return.

Sometimes dreams take a whole lot of chasing. It tends to mean they are all the magical when they finally come true. 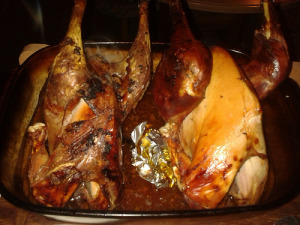 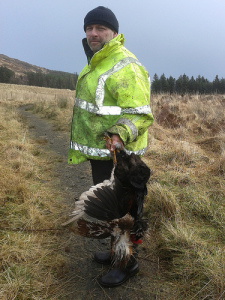 A put off too long dentist visit for us all – a six month checkup and some slightly overdue dental work for Scarlett. This is the shortest possible trip off the island you can manage I think – leaving Rum at 2pm on Monday and returning at 1135am on Tuesday. Luckily our dentist stays open late to accommodate such things. It meant hiring a car (with four of us this works out marginally cheaper than a return train trip and means we can stock up at the supermarket and not add stress of catching trains to the always slightly fraught nature of a mainland trip), finding somewhere to stay and keeping everything crossed that nothing went wrong with our arrangements.

One friend looked after Bonnie and fed the pigs and poultry for us back on Rum, another friend picked us up at the ferry and ran us most of the way back with all our stuff. We managed to barter a turkey for a bed and breakfast deal in Mallaig. We offset the cost of the car hire and ferry trip by buying some fruit trees, seeds and other bits and pieces that would have been more expensive to source online and get delivered. We used vouchers from online surveys to part pay for our fast food dinner. It was as frugal a trip as possible.

We had a scare that the boat may not run today which could have had us stranded on the mainland until Thursday and worried us a lot. It was a rough crossing – poor Scarlett was seasick, but we got home, spent the rest of the day marching up and down the hill bringing things home and will all sleep very well back in our own beds tonight.

This time last year we were positively counting the days and googling ‘definition of spring’ I have always considered winter to be December, January and February, spring to be March, April, May, summer is June, July and August and autumn is September, October and December. I know it’s simplistic but spring always seemed to arrive on March 1st or St David’s day when my maternal (florist) grandmother would bring my (Welsh) Dad a bunch of daffodils every year when I was a child.

Last year was possibly our most special spring ever. It marked the survival of our first winter. Certainly there was the whole turn, turn, turn of the seasons, excitement of chickens, ducks and geese laying eggs again, pregnant pigs, sowing seeds and nesting wild birds, daffodils blooming, days lengthening and weather improving. But most of all there was the rather less poetic and noble ‘up yours’ to everyone who said ‘well you’ve not done a winter yet.’ because actually, we had.

This year we will mark March 1st again as our second winter accomplished. In many ways more challenging, more testing and more of a milestone. I was trying to think of an example to offer up for surviving a second winter and I think it is like a second baby. In some ways you dread it more; you know what’s coming, you recall how much it hurt the first time, you already are aware of the tough bits and frankly are still sleep deprived, barely out of your maternity trousers and not even thinking about your pelvic floor just yet before the next one is imminent! In other ways you are more prepared and ready to face it head on this time, you have ideas of how you might do it better this time, be more confident and assertive about your birthplan this time around. If you have more than one child this will resonate (hopefully, I am aiming to reach at least some of my target audience with this!), if you don’t then maybe you will have had to take your driving test twice, or something….

Anyway, we are edging ever closer to the end of winter 2013/14. It has been universally dreadful across the whole of the UK. It is not loosening it’s grip just yet – we had snow not two weeks ago, the last 24 hours have seen sufficient gale force winds to have the wind turbine tethered and visiting friends both last night and this afternoon commenting on it being pretty extreme in the static – all four of us assured them this was ‘nothing compared to some of the storms this winter’.

This evening I have been putting together the rota for our volunteer community run Sunday teashop on the island, this afternoon I thumbed through my foraging book to see what is coming into season first, this week we sold our first goose eggs of the season and we are now eying up our wood store and appraising whether it will last the x remaining weeks rather than months of log burning. The curlew is calling, the cormorant that hangs out around the river at this time of year is back and word on the street is that Cadburys Creme Eggs are coming soon to Rum Shop.

Spring…. reckon it’s on the verge of springing. 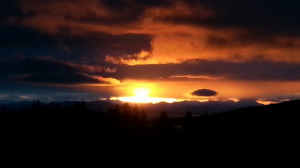 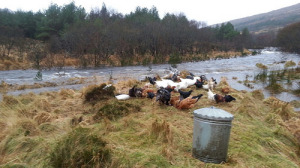 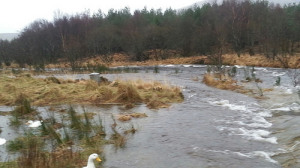 this bit of the river is usually a path 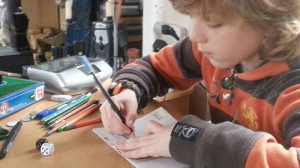 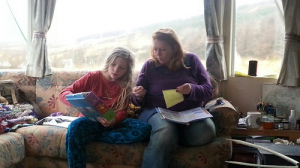