We’ve finished Zone One with a week in Somerset shared between two hosts. This was somewhere we were supposed to have stayed earlier but had been put off by the host as they were unwell when we were due to be with them. They had asked us to stay in touch and reschedule if possible and when we had an empty week in the vicinity we got in touch and arranged it.

We were staying parked in the Caravan Club listed campsite within the land of Rob & Jane and our week was split between Rob and Jane; doing a variety of tasks on their land and Peter, who I had actually made contact with first working in his field and woodland. We slept in Willow, breakfasted in there from food given to us by our hosts and then had lunch and dinner with whichever host we had been working with that day.

We arrived on Monday and after parking up and having a brief tour around some of the smallholding at Rob & Jane’s we set to work moving some firewood, grading it for various different piles and stacking it up ready to season for next winter. There is a real art to creating a decent woodpile; one that will not rot away or cause damp problems for a wall it may be stacked next to, fall down or be unstable – Dragon likened it to playing Jenga and I think he is pretty close; except with far less regularly shaped pieces!

Tuesday I have previously blogged complete with photos and was a day spent with Peter.

On Wednesday we were back with Rob and Jane and spent time having a really good tour of all their land. More firewood moving and some pulling weeds and clearing an area that had had some hedge laying done in the past but had grown over.

Thursday we had a day off and spent it trawling charity shops for some replacement jeans for those of us who have gone down a size or up a size in three months! After messing about with various footwear options for me I finally decided I need some proper workboots with steel toecaps so that I can be confident of safety, waterproofness and so on. I’ve been looking in charity shops everywhere we have been and not come across any so I decided to invest in a new pair. We were near one of those horrible outlet village shopping centres so we ventured in far enough to visit the Dickies outlet store and pick up a pair of very heavily discounted boots for me (well under half the website price) . They have already been very comprehensively tested with Dragon and Star both standing on my feet to check they work! In the evening we headed over to Middlewick for a very nice evening with Jill as we’d not managed a proper goodbye when we left to move on earlier in the week.

Friday we were with Peter again and did some putting down plastic and carpet to suppress weeds and warm the ground up ready for autumn planting in a couple of hours, harvested some comfrey, checked on the trees we’d planted and mulched earlier in the week and had the tough task of drinking a whole bottle of fizzy drink between us so we could use the plastic bottle to make some sapling protectors.

On Saturday Dragon and Star painted some bituminous paint on the ends of some posts and we spent some time in the orchard grading and stacking and splitting more firewood. In the afternoon we went along with Rob to a local jumble sale and picked up huge bargains of jeans and jumpers all round along with some books and a couple of toys for Dragon and Star all for about 20p each. 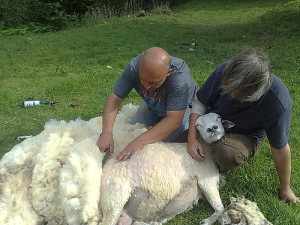 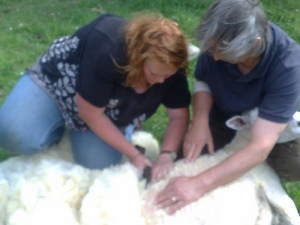 In the evening we all had a big group dinner with Jane, Rob, their two teenagers who live at home (a third is off at uni) and Jane’s parents which was very jolly and felt rather like Christmas all sat at a long table. We had lots of compliments about Dragon and Star which was lovely, lots of enthusiasm for our long term plans and offers to return again for another stint, which if we end up going round again is something we may well take them up on.

Nic:
Bad: It was frustrating to realise very close to the end of the week just how much knowledge our hosts had about so many of the things we are interested in. They had a very full library full of books on farming, smallholding, dairy sheep, beekeeping and so on and lots of experience of animal rearing and crop growing. I felt it was a missed opportunity not learning more from them or spending more time with them. On a more flippant note I also ate way too many lentils – I bloody hate lentils!
Good: It was a restorative place to spend time and gave us back some faith in smallholding and animal keeping after the rather frantic and haphazard environment of previous animal keeping hosts. The animals were all cared for with compassion and respect, they deliberately kept their flock of sheep small so they were able to give individual attention, shear by hand, lamb with involvement where required and so on. There was also a relaxed, slow pace to life with both hosts, a real feeling that everything would happen in it’s own time, working alongside the seasons and with nature – permaculture in action I guess, without the fancy label or need to reinvent the wheel. There was recycling, reusing of resources and plenty of ‘green’ living at both hosts.
Learnt:Sadly very little in entirety but plenty of sparks of knowledge and food for thought – Jane talked to me about milking sheep which was something I had not thought about and will learn about more, we got to have a go at sheep shearing which was far trickier than it looked and I’d like to do more of. I learnt a little about woodland, trees and tree planting from Peter which I’d also like to take further. We got involved in a bit of clearing where some hedgelaying had been done – hedgelaying is another skill I’d like to learn more about. Like Star I also felt there were some areas we were more knowledgable about than our hosts (chicken keeping particularly) which was heartening that we do have some knowledge already.

Dragon:
Bad: I didn’t feel like I helped Mummy and Daddy much.
Good: I found that it’s getting easier to eat different foods.
Learnt:: I learnt most on the days with Peter, including that every bit of land has some use, whether it is bumpy, hilly, bad soil, water available or not. I leant bow line, granny and reef knots from Peter too.

Star:
Bad: I enjoy being at places with more animals.
Good: They looked after their animals really well, the best of anywhere we have been so far.
Learnt: about the dogwood tree, how to identify it and that you can use it for arrow making. I also learnt there are different types including yellow dogwood. That I know loads already about chickens, it was nice to feel like a bit of an expert and realise I already knew more than our hosts did about hatching and breeding because I have done lots of it already.

Ady:
Bad: We didn’t have much time spent working alongside the hosts while we were at Little Coombe, which for me is usually one of the best bits of WWOOFing.
Good: The animal welfare was exceptional at Little Coombe. The chickens and sheep were treated so well and it was so lovely to witness, exactly how I would like to run a smallholding.
Learnt: About hand shearing sheep, only a little which has whetted my appetite to learn more about that. I also learnt lots with Peter about comfrey which I am really interested in and tree planting.