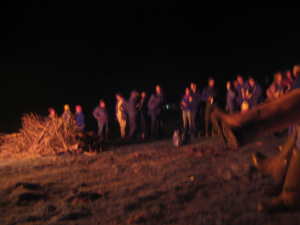 This rather blurry and probably nondescript photo does not do justice to the memories it stirs up for me. Imagine a cold, crisp night with amazing stars. Crackling wood from a bonfire, cosy heat, sparkling embers. Mulled wine passed round, a gaggle of children sharing sweets and giggling, writing their names with sparklers. A bonfire built as a team, faces all aglow from the firelight. Fireworks working their own special brand of magic and echoing replies from neighbouring islands and the mainland in the distance. We retired to the tearoom after the fireworks ended and the fire died down. We played pool, chatted, somone started playing the spoons and the squeezebox. The atmosphere was like something from a film. We were aware of tensions, of annoyances, of politics within the community but the overwhelming feeling was affection, pulling together, working towards a common goal. We’d been adrift for 9 months from anywhere we called home, moving from place to place every few week, searching for the place to settle and put down roots. 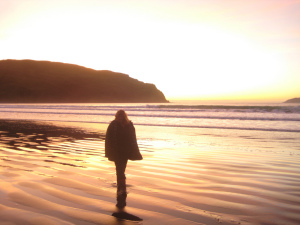 Here’s my other favourite picture from that time on Eigg. Infact it’s one of my favourite pictures of me ever. I had it as my screensaver for ages. That corner of land on the right is Rum. I spent hours and hours pacing this beach on Eigg thinking through the idea of a move to Rum while Rum itself loomed large in the background. With every footstep I changed my mind about whether it was wise or foolish and this was before we’d even stepped foot on Rum. It’s quite possibly the hardest I’ve ever thought about anything. My conclusion was that if it was meant to be then it would happen. As we know, a year later here we are having actually lived her for over six months now.

Today we learnt that Croft 2 has been let. We’re really excited at the thought of having neighbours and new people coming to the island. Our turn as the new people is coming to an end, we’ll be part of the welcome committee, the ones sharing tips on how to settle in and get to grips with island life. That feels pretty amazing just a year after the above photos were taken.

Tonight was supposed to be the Rum bonfire night. We were all set – Ady helped build the bonfire yesterday, I helped mix venison with herbs to make burgers. This morning Dragon, Star and I along with others built the Rum guy ready to set atop the bonfire. We left the croft and walked down to the village but it rained and hailed and rained some more to the point that it was called off for tonight and postponed til tomorrow. The benefit of living on an island is we get to decide such things between ourselves.

The walk back to the croft was particularly challenging this evening with the path more like a river. We had to carry children and dogs across parts and Ady and I both required a stiff drink once we got into the static although Dragon and Star considered the whole thing a big adventure. We definitely did our thing today that scared us.

And we haven’t even had the fireworks yet!