Facebook asked me today to fill in details about where I went to university and where I grew up. Given I have yet to do either of those things I was unable to fill in the answers….

Davies was asked recently about whether he wants to be an artist when he grows up from someone who had seen his postcards on sale in Rum Craft shop  – the correct answer to this rather silly question is of course ‘I already am artist, I don’t need to wait until I grow up’.

Last summer both children watched me start to work out what sold at the Market days here on Rum. They have been involved every step of the way with discussions about business plans, earning enough money to cover our costs and deciding which direction to head in with investments of time, energy and money. While WWOOFing we all four learnt lots about finding your market and being clever about meeting your customers needs. One of the most inspiring hosts we stayed with was a farm in Devon which sold at various farmers markets in the local area – fresh meat and eggs one week, meat pies and pasties made with unsold meat the following week. Davies and Scarlett have been a party to talks about adding value, minimising costs, only doing things you love.

From when the children were tiny we have always encouraged them to follow their passions and interests, do things they love and ignore more or less everything else. I have this theory that left to our own devices, freed from expectations and unnecessary distractions we are all gifted at something. That if celebrated footballers were not allowed to practise kicking a ball about until they had finished their geography homework they may never have played for England, that if celebrated pianists had to chop firewood or dig up potatoes instead of spend hours at the piano they may not have honed their skills to such a degree. That lucky individuals get their talent spotted, or encouraged rather than belittled or disregarded and that is what allows them to rise above average and towards spectacular. I’m not talking about encouraging deluded dreams for celebrity or fame as we all too often see on TV talent shows, rather children being supported and allowed to focus on what comes naturally to them as an interest or spark of a talent.

I believe that if you do what you love you will love what you do and therefore be successful, productive and fulfilled by it. First and foremost I believe in intrinsic reward, in getting the biggest kick out of simply doing whatever it is you are doing rather than the end result. But I am also not naive enough to think we can survive on fresh air and a feeling of fulfillment – I know we need to earn money to feed, clothe and shelter ourselves. I just think that with a few exceptions we should more or less be able to achieve earning enough by doing what we love if we do it well enough. I think life is too short to spend time doing things we don’t love and that rewards such as nice cars, holidays, gadgets and fancy clothes will never make up enough for spending our precious time engaged in things we don’t love just for themselves.

Which is why we live in an off grid caravan on a remote Scottish island of course… I practice what I preach! The trade off for our freedom to live how we wish, spend our time enjoying life, only doing things we love is living in a way that has such low living expenses that we are not obliged to work doing things we don’t love in order to pay the bills.

A question we are often asked as Home Educators as what happens to Davies and Scarlett in the future. What about qualifications? What about jobs? My answer is that what  I have taught them from the beginning is that they need to do things they love, do them well and find a way of making that provide for them.

For Davies this is art. He has been an artist since the first time he grabbed a chunky crayon and aimed it at a sheet of paper and created a mark. Since the first time he decided to make a sculpture out of his mashed potato at dinner time rather than eat it. On family picnics Davies would take the wax packaging from babybel cheeses and create little figures, he’d make sand creations on the beach, bubble towers in the bath and endlessly, ceaselessly draw.  When I read those towering piles of picture books to the kids it was the illustrations that told the stories to Davies not the words. His heroes are Quentin Blake, Rolf Harris, Colin Thompson.

When we arrived on Rum Davies was quick to begin capturing his view of Rum on paper – landscapes, wildlife, people. So when it came to him thinking about launching a business it was obvious that he’d sell art of some sort. The staple item for an artist living in a tourist destination is postcards. The first step was research – working out the landmarks and iconic images of Rum, sizing up the competition already on offer in photography and other gifts being sold on the island, staying true to his own style and creating a product he believed in and enjoyed doing. The first step in market research was a budget line of Christmas cards – line drawn, photocopied and stuck onto card blanks then coloured in. These sold out but proved labour intensive and while fine for a short season (only really sold in December) a fairly disposable product. Davies learnt that humour sold well, as did using easily recognisable images of Rum. He also discovered that people love buying off children and that selling a sliver of himself with every card is a small price to pay.

So market tested, product ideas developed and a clear vision created Davies Designs was ready to launch. An interest free business loan of £30 from me and he was off. Investing in four different postcard designs to see which sold best Davies bought 40 postcards. He negotiated a spot in Rum Crafts on a no commission basis in exchange for agreeing to sweep out the shop every so often. The retail price was set by the wholesale price having discussed mark ups, profit, turnover and worked out how many would need to be sold in order to reinvest. Davies created his brand and did some posters to advertise.

Sales have been steady and with excellent feedback including a commission to create postcards of neighbouring Isle of Eigg from someone. The postcards have proven popular with islanders and tourists alike and stocks are running low. With that in mind and with careful monitoring of popularity of design Davies collected his first takings which covered the cost of his first stock purchase. He redid his designs to make them bolder and improved upon his first series scaling down to just two designs based on the most popular designs so far – a map of Rum and Kinloch castle.

Further branding and redesign of the poster to take in the most important information and today Davies reinvested all his takings so far. By choosing just two designs rather than four he was able to purchase larger quantities of both and therefore get a cheaper price. A special offer on the website meant he was able to get a further ten of each design at a real knocked down price so his profits on the next batch of postcards will be about double what they have been on the first lot. He is on track to have money to replenish stocks and clear his loan from me in his first season of trading.

Already Davies is considering diversification into different products showcasing his artwork to increase his offering and extend his brand. He has discussed additional outlets for his stock and is constantly looking for inspiration for his art.

Most importantly though none of this is hard work. It’s drawing, which he adores, talking to people and building short term customer / vendor relationships or longer term agent / outlet relationships, all of which he is good at and enjoys. He is learning all the time and is gaining really important skills in promotions and marketing – sound transferable skills which he can use regardless of what path he takes in life. None of this feels like work, tedious, containing, restrictive or boring.

I’m incredibly proud of Davies for all of this. I have obviously encouraged, facilitated and helped along the way, sometimes gently guiding and supporting, at other times when it is an area I have experience and knowledge in I have shared that and advised but this is very much his project, his baby, his passion. 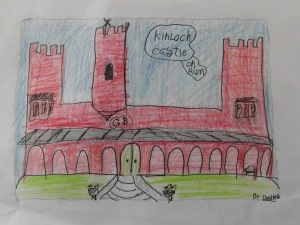 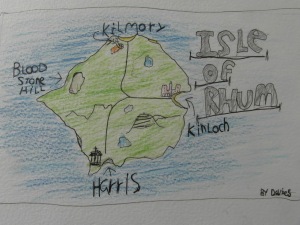