I have great intentions to do a FAQ for the blog but perhaps unsurprisingly I’ve not managed to get round to it this week. It’s been a pretty busy week so far and we still have Sunday to go.

There is no such thing as a typical week here, not even a typical day really but this week has probably been a fair representation of the way life twists and turns in unexpected directions when you least expect it here.

On Monday morning we went to the village for various bits and pieces then the four of us headed out for a walk. We had an inkling that life may get a bit crazy after 9pm but no real idea what direction the crazy may take. I wanted to take some time to reflect, to get some perspective and a really clear reminder of what is actually important to us. So we walked out, into the island to a higher place where you look down on the village and the croft and see how very small our little corner of the world is. In relation to Rum, in relation to the area of the highlands and island we live in, let alone in the wider world. We walked and talked and looked back and looked forward (quite literally as well as metaphorically). 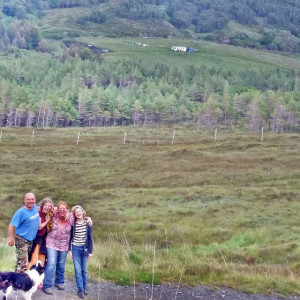 Back at the croft we had dinner and settled down to watch the show. We watched at the same time as everyone else, although because it was on the laptop, with no adverts and plenty of buffering due to the slow internet, and because it was just us and we were concentrating more on whether we’d said anything stupid or embarrassing, or looked fat or mad or were remembering the many takes that shot took or the funny back story it didn’t quite sink in that nearly 2 million other people were watching all over the place sat on their sofas at the same time.

It started to sink in when our phones began binging and dinging with notifications of facebook messages, blog comments and emails. It sank in a bit more when we rang my parents for their reaction. Everyone else went to bed and it sank in a little bit further when I read the twitter comments which had me placed everywhere on a spectrum from inspirational and amazing to selfish, exhibitionist and (my personal favourite) disappointingly annoying. There is a reason people don’t read the comments! The reality is of course I am all of those things and many more, as are we all. The difference is that I am very happy, very secure and not particularly interested in other people’s lives other than wishing them well to get on with chasing their dreams and following their hearts without judging.

On Tuesday Ady and I were working, one of our varied occupations – this time helping move furniture about. In the afternoon Ady started working on extending the pig pen, I did copious amounts of baking and sang along loudly to music while Davies & Scarlett played outside. 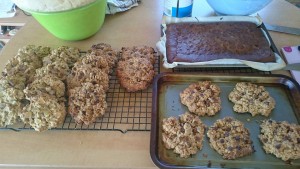 Wednesday was about being Mrs Teashop for me, chatting to visitors to the island and selling home baked goodies along with my co-Teashop host. Davies and Scarlett were down at the hall too and did their share of chatting to tourists. Ady did some work on another little job we have taken on repairing a bridge on the island and then headed back to the croft for more pig pen preparation.

Thursday was our regular whale and dolphin watching sea voyage. Except that as per so many of the trips this year we saw nothing in the way of cetaceans. We did see plenty of manx shearwaters and gannets and gulls though, which never wears thin no matter how much we might crave an orca sighting to go with them.

Friday and Saturday saw Ady doing some ghillie work – a bit of a Rum rite of passage by all accounts, leading the Rum ponies to bring back the culled deer working alongside the stalking party. 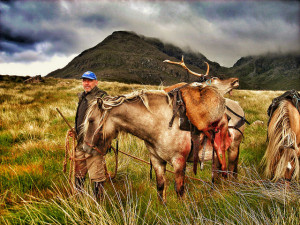 I did the ferry run, collecting the animal feed delivery, helping with the shop delivery, driving the car across the river and hulking bags of animal feed around the croft. Davies and Scarlett helped deal with runaway pigs escaping from the pen (they are very ready for the pigpen extension to give them more foraging). This morning I did my regular Saturday morning post office shift. I’ve also been learning a new craft – string art -, watering the polytunnel, baking and bread making and responding to the wave of emails we’ve had this week. And planning a mainland trip to the dentist (queen of logistics) and dealing with various paperwork. 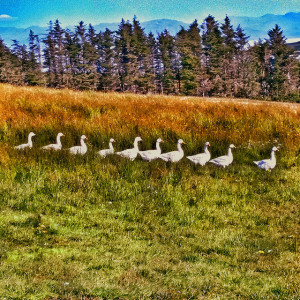 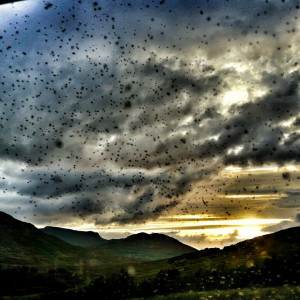 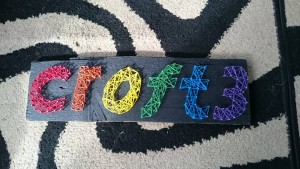