There is a certain irony that having survived polar vortexes and arctic weather bombs (we actually do have the t shirts thanks to a parcel that arrived last week from friends!) the worst winds we have experienced so far on Rum came without a name.

For the first time in our caravan on an exposed hill on a wind whipped Scottish island we overcame our habitual bravado and accepted one of the (four!) offers of beds for the night down in the village. In the past there have been at least two occasions where Ady and I have laid awake in the middle of a mad storm regretting staying put but knowing that we are safer staying in the caravan at that stage than wondering around in the dark while debris whistles past our ears. This time we decided to take our que sera sera attitude down to the village with us and let it sleep in a real bed with a roof and solid walls.

Neither of us slept well even so, it turns out that we are used to the noises in the caravan and while we are roused from sleep by them we do at least have a sort of spectrum as to what they mean in terms of risk, potential damage and scariness. In a house surrounded by trees the moans and groans and creaks are unknown and there were a lot of them last night. Along with thunder and lightning. And a gnawing worry that maybe not knowing what was happening up on the croft was almost as bad as experiencing it.

So this morning we walked back home, passing several Rum folk with stories to tell of their evenings of lying awake for various reasons. The internet was out, but it was back on later – not sure whether that was a fellow islander doing a fix or the power coming back on on the mainland where we get our signal from. A chicken house had been overturned on one of the other crofts and a hen lost, some roofing had come off on a house and the paths, woodland and tracks were strewn with huge branches. As we walked towards the croft it was with an increasing sense of doom and when Ady asked if I was scared what we might find I was lying when I said no.

The polytunnel was the first discovery – ripped in three places, flapping wildly and with four of the five salamis lying broken on the floor. Thankfully we have little in the way of crops in there but until the winds drop (sometime next week is the forecast for that) there is little we can do to fix it. 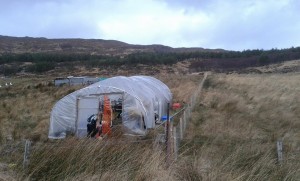 Depending on how much further damage it sustains (it’s currently blowing another, smaller than last night but certainly fair sized hooley out there!) we may have a plan to patch it up.

Next the honesty larder fridge, on it’s side with the door open and contents spilt across the path, bird feed bin also over but thanks to a bungee fix on the lid it was still intact. 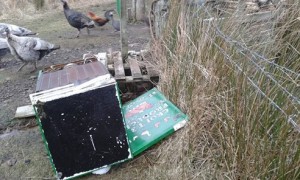 That was merely a case of picking it up and righting it – we must tie it to the fence somehow, although I guess it probably does less damage simply blowing over. The bird feed bin was quickly picked up and birds flocked to be fed. All present and correct although the slightly ailing duck which keeps getting better and then going downhill again was looking pretty bedraggled so we have put her back in a cage with food and water to have some recovery time, I guess she found the storm pretty tough going.

Then up to the static, we could see it still had it’s roof, one of the solar panels was knocked askew but was not damaged. Amazingly, astonishingly all was well. All windows intact, all roof panels in place, all connections still connected. We could tell which direction the winds had hit it from things inside being knocked off shelves and a very minor leak of rainwater through a window where it must have been driving against it and found the poor seal but all still in one piece. Phew.

The horse box had taken a beating and some of the contents had been blown outside so that took a bit of dealing with. The wind turbine had remained tethered and during a quiet period this afternoon we untied it to check it was still ok. It is now tied up again against tonights storm.

A bit of the pig pen roof had come adrift so Ady spent the morning fixing things outside while the kids and I sorted out inside and breathed massive signs of relief. A slew of texts had come through from friends worried about us so we replied to those and then the internet came back on and I was able to update to the wider world that we are okay.

It was a scary one though – the grass ripped from the ground and then blown onto the fence, the washing line and the wind turbine guylines shows a little of the force of the gales. 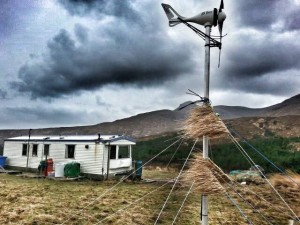 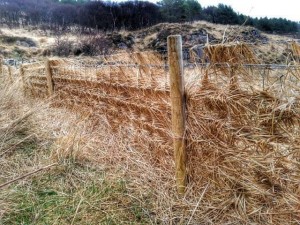 Howling wind outside and rattling walls inside or not, I think we’ll sleep well tonight.