It’s been an amazing year for birds for us so far with so many hatchlings and such a high success rate in rearing them. We already have five of this years hens ringed and released with another 12 or so ready do have their mother released and the young ringed and released too. We have two more broody hens sitting in large clutches of eggs and of the young ones identifiable so far we have a really good number of hens to add to our egg producing flock for next year. Any cock birds will be kept penned and fattened for eating as we don’t need any more boy birds this year.

We’ve had three successful broody ducks hatch cluctches of eggs and all ducklings are doing well too – our superstar duck Crispy has six almost ready to be released ducklings (plus one which Scarlett has reared and is also doing really well and living outside now, although it still comes in the caravan for daily cuddles!), her daughter Orville has carried on her mother’s legacy and hatched eight ducklings who are all doing well and one of our white ducks (who could quite possibly be Crispy’s mum, one of the white ducks is) has also hatched six healthy ducklings who are almost ready for ringing. Too early to tell the gender of the ducks just yet but we will likely fatten any drakes of this year’s brood for eating too as we already have two drakes and otherwise the girl ducks just get too hassled by the boys, a 1:10 type ratio is ideal and we have had more of a 2:12 for the last year.

We have been making more houses and pens this week, a task made a million times easier since we invested in some cordless power tools. We’ve had a drill for a while which utterly changed our lives having been using screwdrivers and rachets / socket sets prior to that which made every task so much harder and took so much longer. I was not so confident with the drill and found it a little heavy. We have bought a cordless circular saw, reciprocating saw and a smaller drill which were a big investment for us but have already made life so much easier and enabled us to get on with construction tasks so, so much quicker. While Ady was building houses I was able to make pens without each of us having to wait to take turns with the tools. 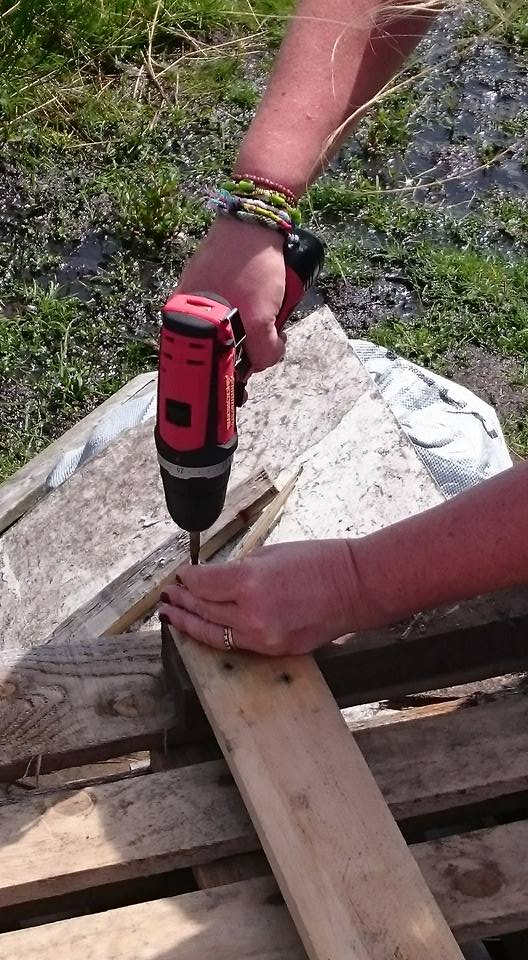 The wood is all scrap or dismantled pallets, the roofs of the various houses are very creative – so far we have used panels from a drop side table, the plastic tops of dishwashers and fridges which we scavenged from appliances waiting to be collected by the council as they are broken. The netting over the pens is off cuts from the fruit cage netting. The only parts we are buying in new are the screws and the chicken wire. At the end of the breeding season all the pens can be dismantled into individual panels as they are held together with re-usable cable ties and all the houses will be dotted around the croft as mini chicken houses / nesting boxes ready for next season.

We have runner ducks arriving tomorrow – a new breed of duck for us but one we all really like having seen them at various sheepdog displays being herded around. We have three girls and one boy coming and we’ll see how they all settle in to free range life and being part of a larger flock. We have also rehomed a whole gang of Muscovy ducks from our neighbouring island of Muck where their previous owners are moving away. Four ducks, a drake and associated ducklings belonging to two of the ducks. 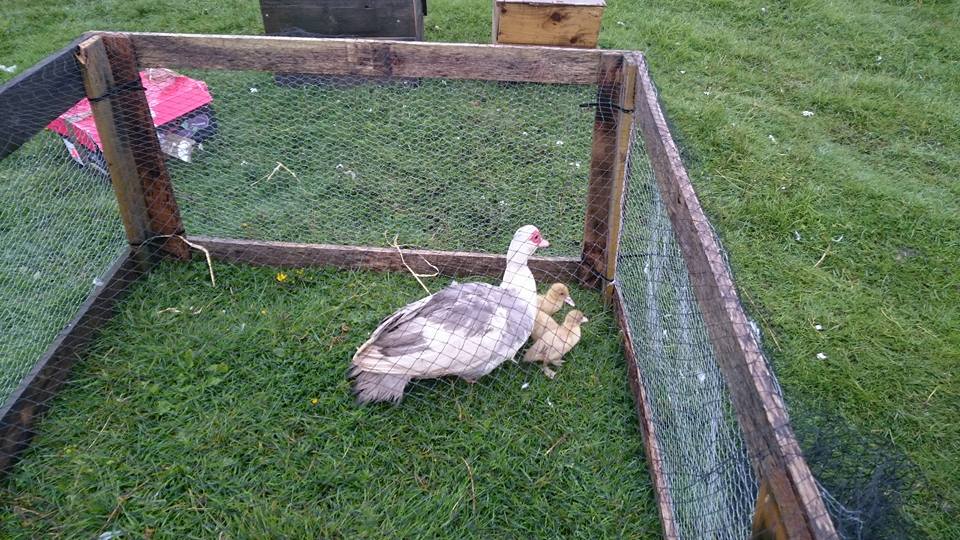 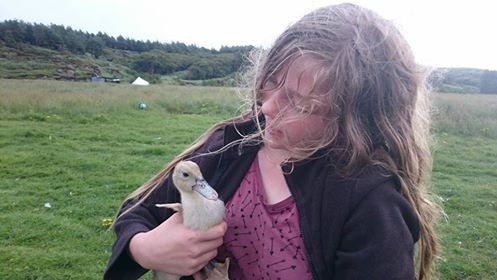 It’s a real shame that our geese all failed to hatch a brood this year, despite at least four of the geese going broody and sitting on nests and that the turkeys we had hatch didn’t make it past the crows as despite disappearing for a few weeks the female turkey is back hanging out with the male turkey again so we assume if she did make a nest and start brooding the eggs the crows harried her off of it. Maybe next year – at least we know we have hatched both turkeys and goslings before so it can happen.

Meanwhile we continue to make pens, process the birds along the line – first we move them into a pen with their mother, feed them several times a day so they get used to being part of the feeding frenzy, the sound of our voices, the siren song of the dustbin lid being banged heralding food o”clock, releasing the mothers as soon as the young are fully feathered and don’t need to sit beneath her at night and then ringing their ankles and releasing them a few days afterwards. The area outside the caravan looks like a petting zoo and indeed almost all of the islands children, and several visiting children have been up to meet all the baby birds.