Our WWOOFing adventure was not the first ever time we had packed up ourselves and changed our life direction. In 2001 we were offered the opportunity to move from Sussex to Cheshire when Ady’s old boss set up a new business venture and offered him a job. At the time I had just gone back to work after having Davies (1 day a week in the office, 2 days from home) and we were planning a second baby fairly soon so it felt like a good time to say yes to something and somewhere new and different.

We were there for only a couple of years, during which time we had Scarlett, decided to Home Educate the children, gained loads of new skills and work experiences, settled into life in a completely different part of the UK to what we were used to and set about building a life for ourselves. We’ve been back to visit several times to catch up with friends.

We’ve just arrived back on Rum after a week off, our last trip off the island until we leave for the winter in mid November. As usual it was a multi-purpose visit. An orthodentist check up for Scarlett, collecting our new car for me (I went off the day before the others and got the train to collect the car then drove it back to meet them the following day), but the main reason was to attend a live podcast show which was one of Davies & Scarlett’s very delayed Christmas presents. The same podcast that we went to Sussex for last autumn to watch a live show of. This time when their European tour dates for 2017 came out we had already decided we would be leaving Rum for the winter but had no real idea where in the UK we might be so chose Manchester as the most central location to best suit wherever we might have ended up on the basis that we know the city well and could combine it with seeing friends too.

In the end we didn’t catch up with as many friends as we had anticipated – our dearest friends, more like family, happened to be away during our time there so our catch up with them will have to wait a while. Instead we did a lot of walking down memory lane, re-visiting the places that had meaning to us from when we lived there. I had looked at some old photos of our time in Manchester and we used them to go and take some then and now pictures and re-live the memories of those days when we took them. 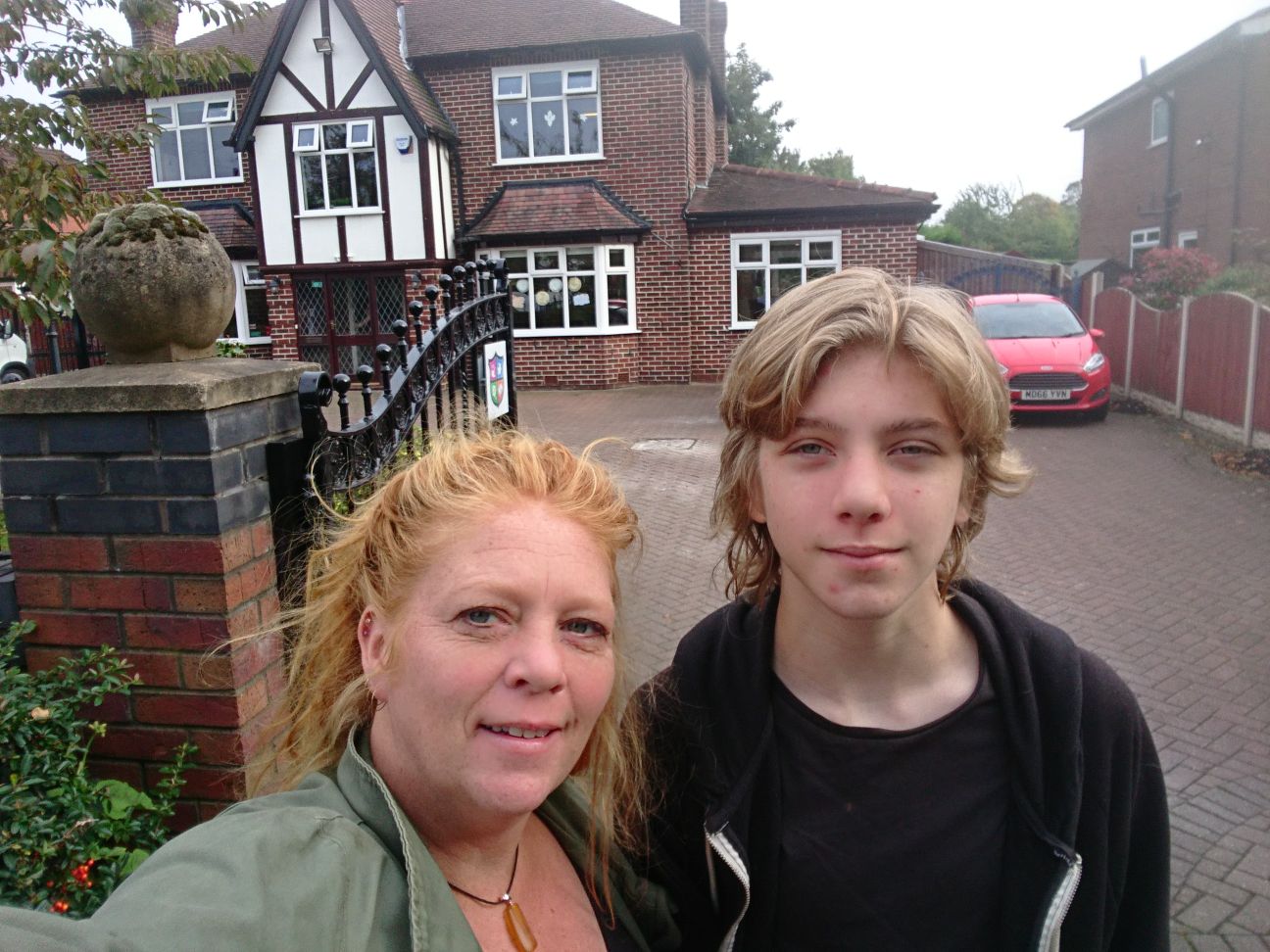 This is Davies and I outside the daycare nursery he went to. He went for two short days a week for about 6 months. It was a lovely nursery, with lovely staff but he was very sad to be away from me and when Scarlett was born we took him out. It was in looking at alternatives to childcare and early years education that we stumbled upon Home Education, learned more about it and ultimately ended up deciding to follow that path for Davies and Scarlett. 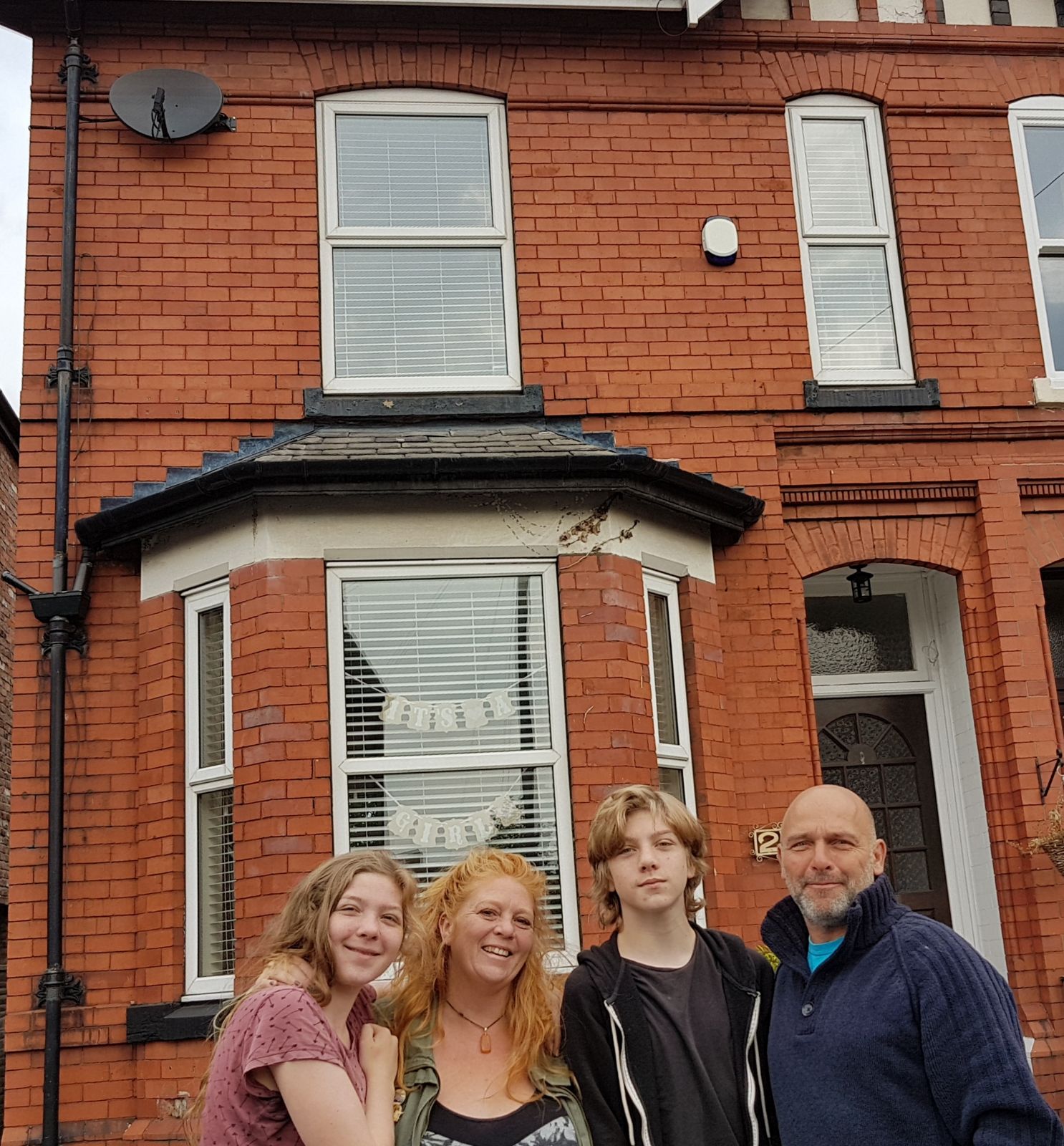 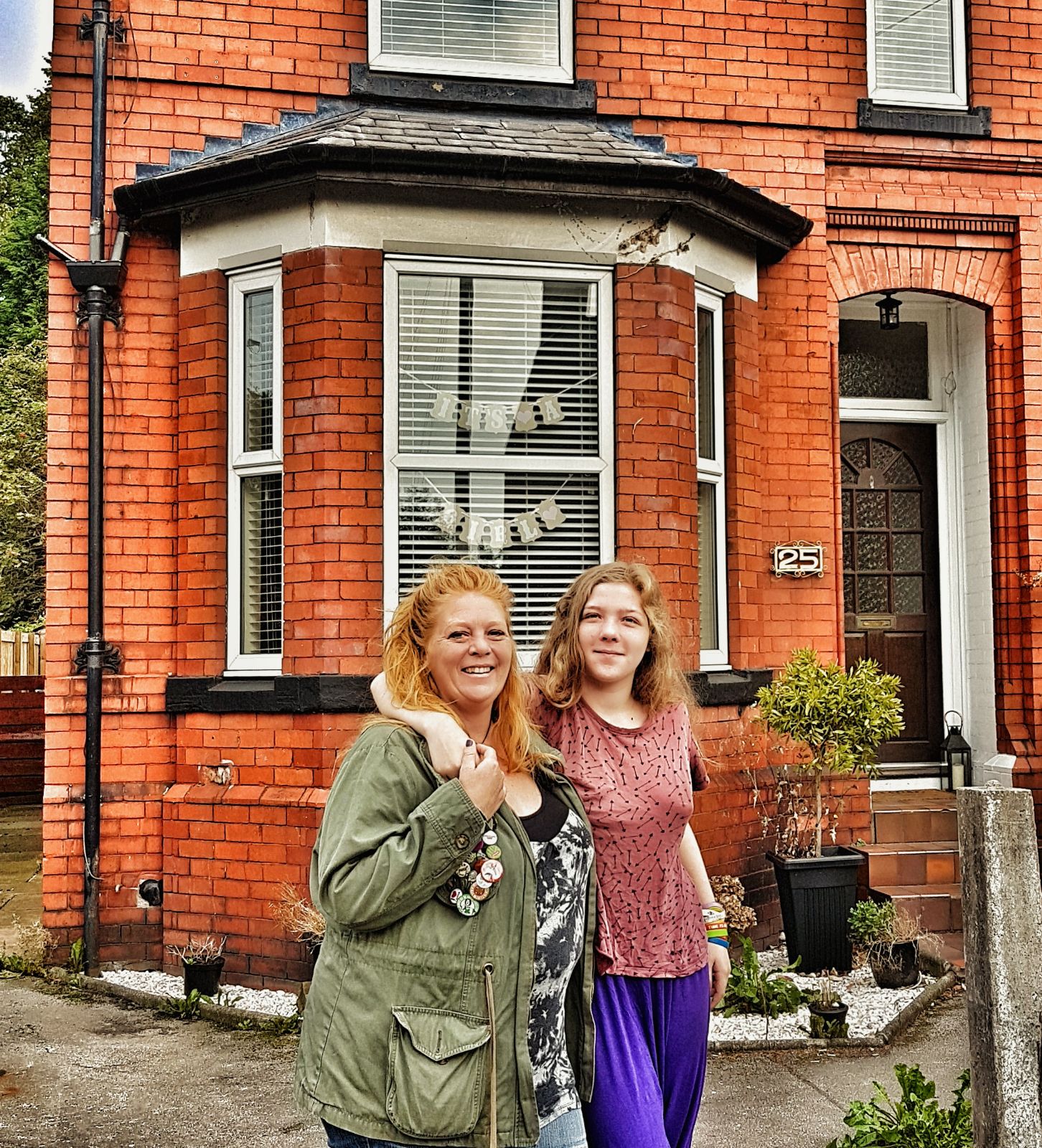 Our old house. The house where Scarlett was born (home birth), where both the children took their first steps. As we pulled up we noticed a banner in the window proclaiming ‘it’s a girl’. We knocked on the door to ask if it was OK to take some pictures standing in front of the house and congratulated them – a brand new little baby girl now lives there. 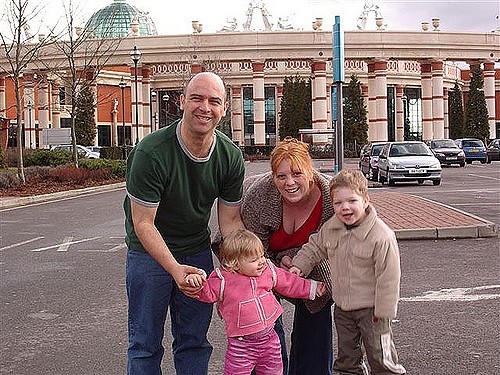 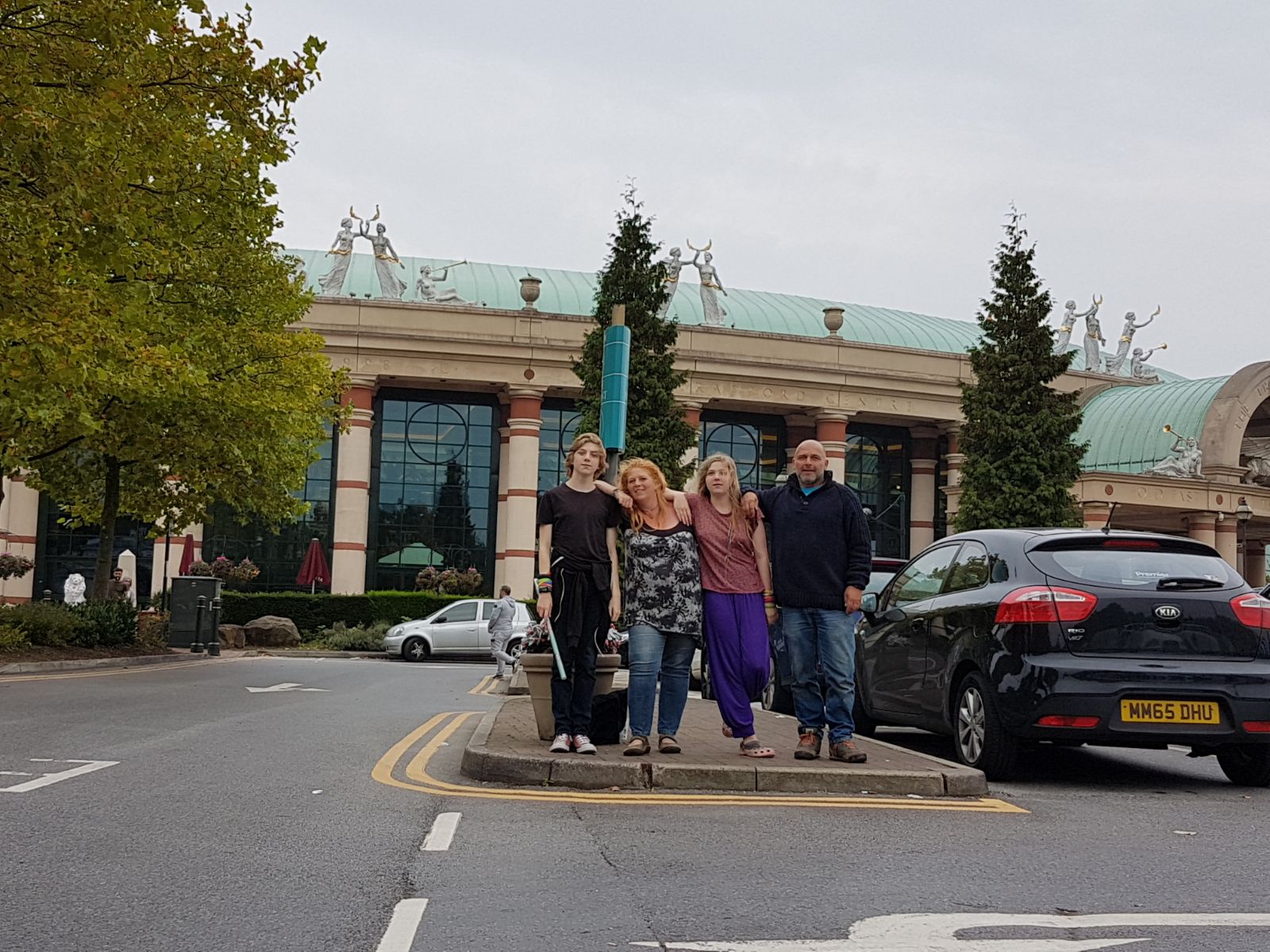 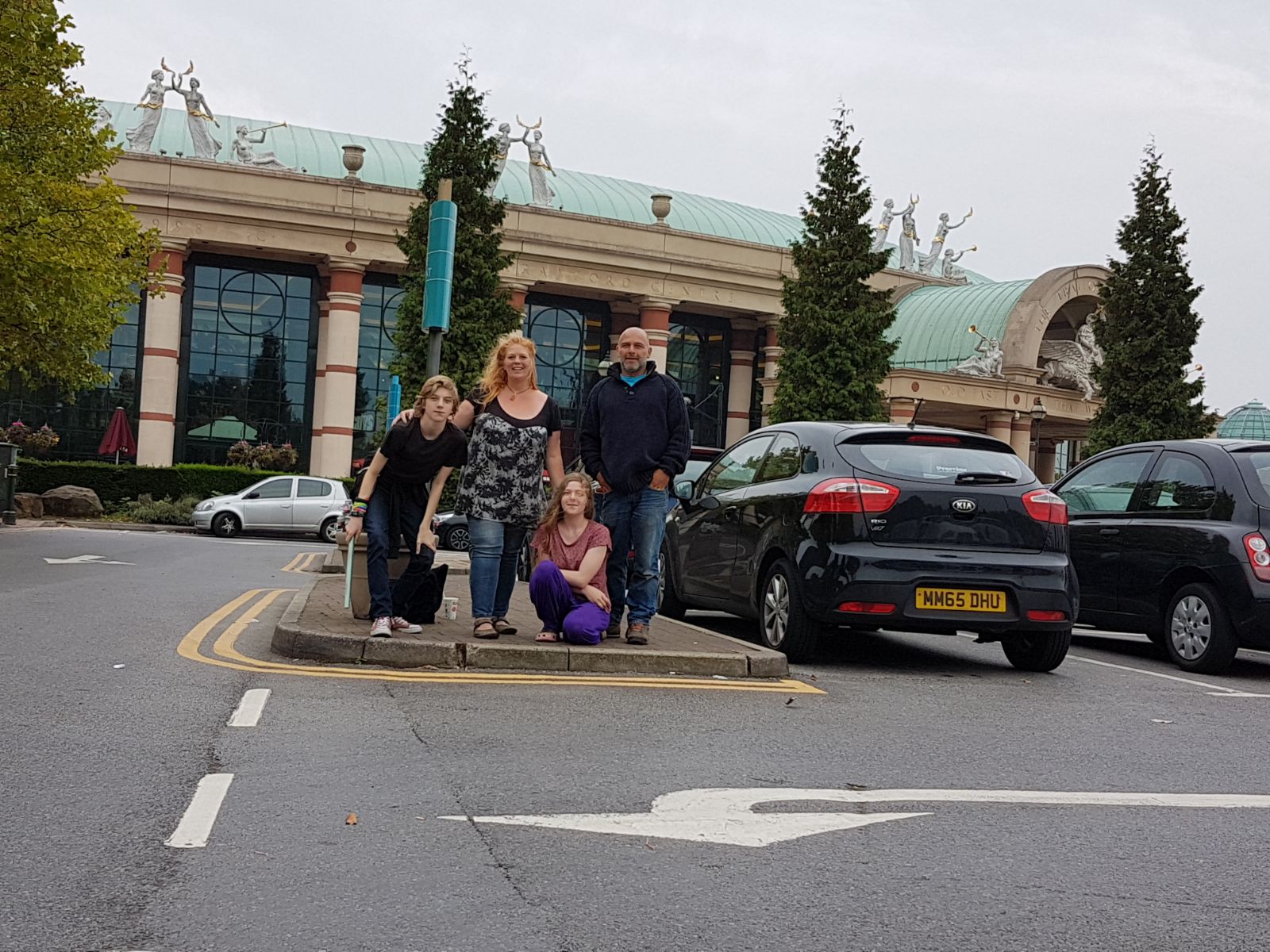 Outside The Trafford Centre – where Ady and I both worked and we all spent a lot of time – a shopping mall with cinema, restaurants and more. The old pic was taken in 2003 and was the day Scarlett got her first shoes and took her first outside steps. 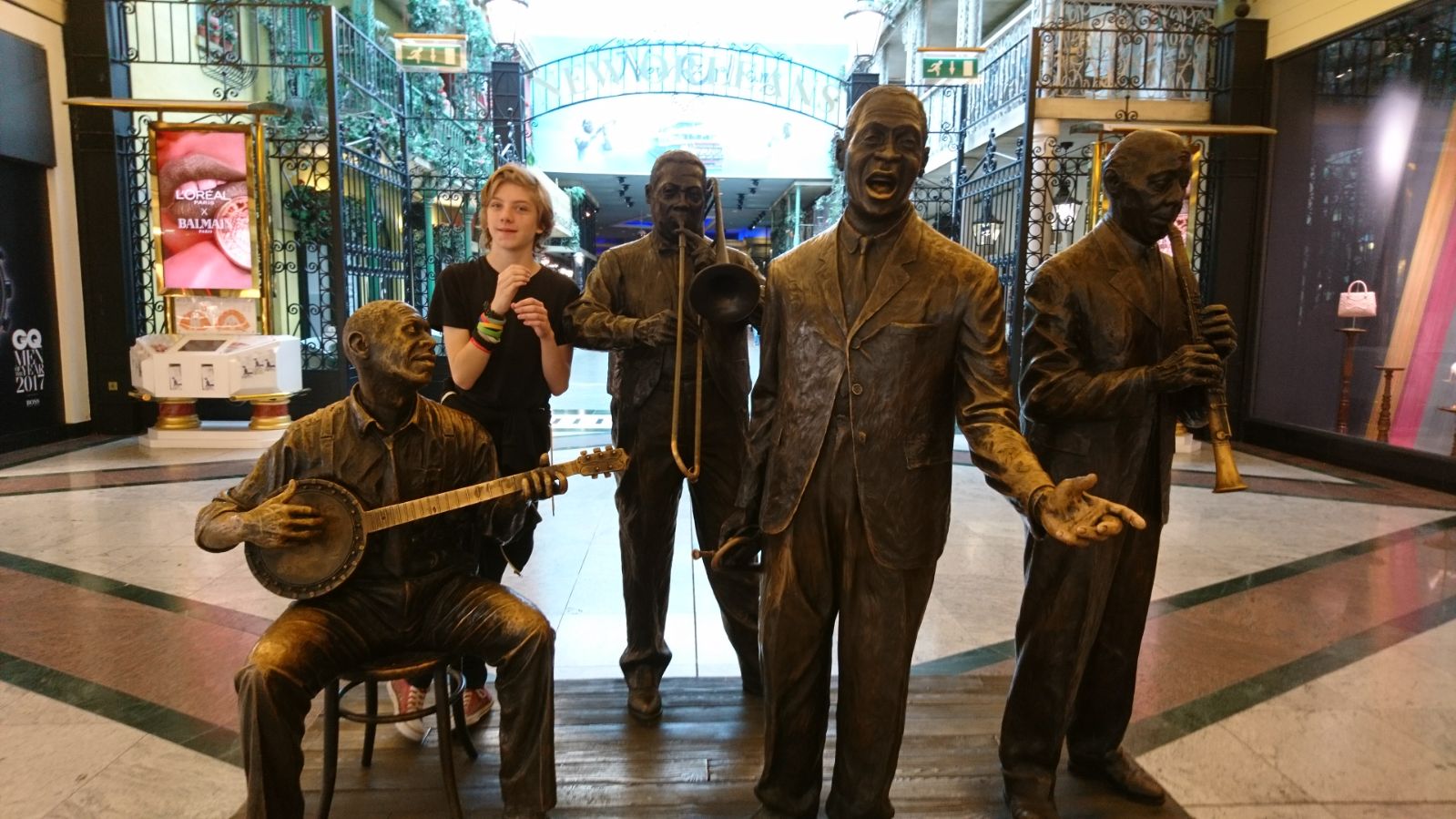 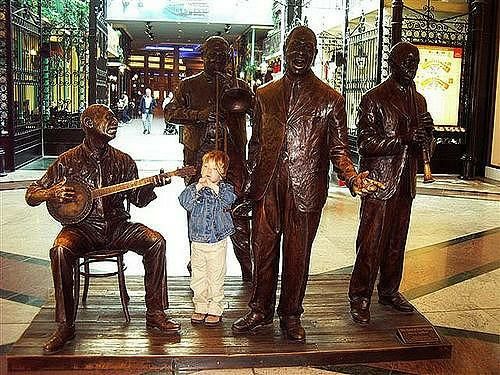 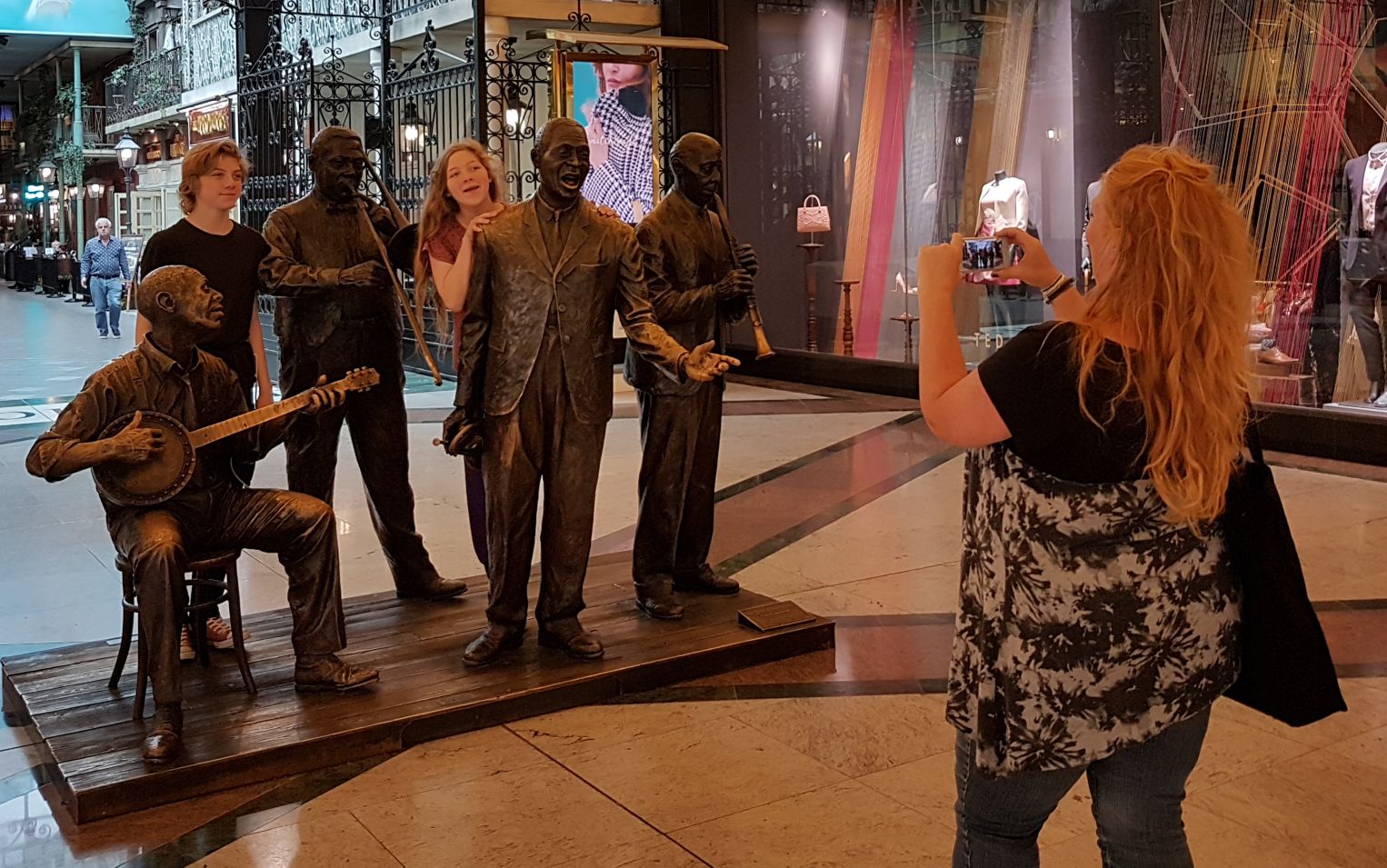 Inside The Trafford Centre, little Davies pretending to be part of the band. Now Davies tolerating with good humour my desire to recapture the moment. 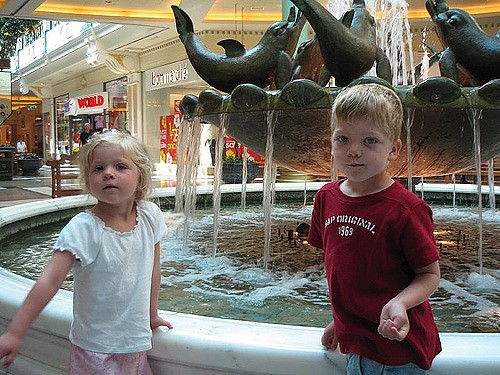 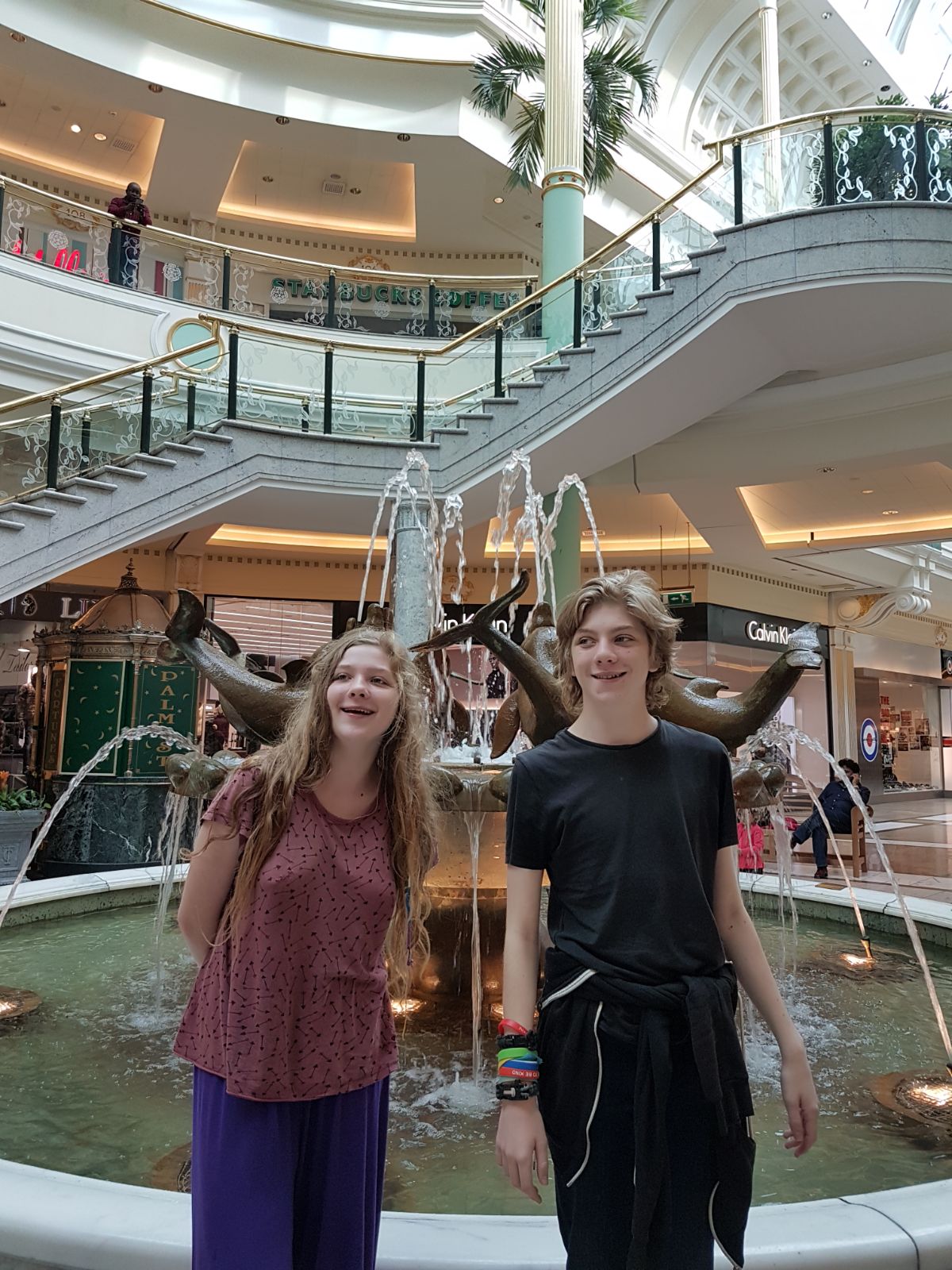 There are various water features within the centre which used to fascinate them when they were little. 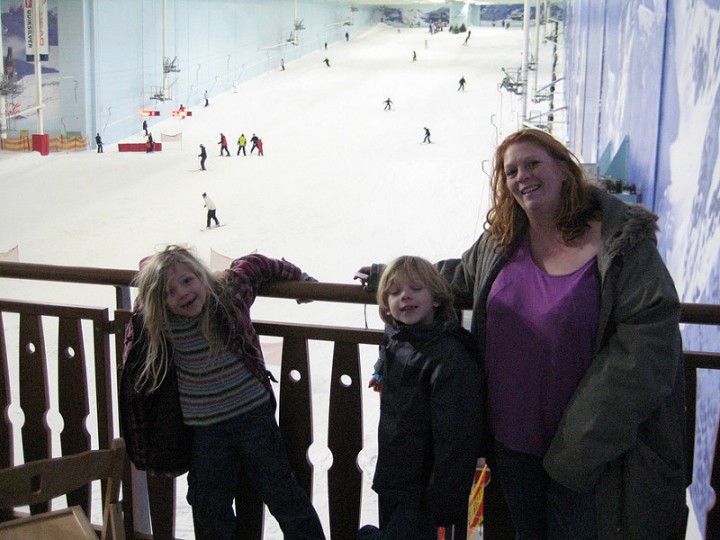 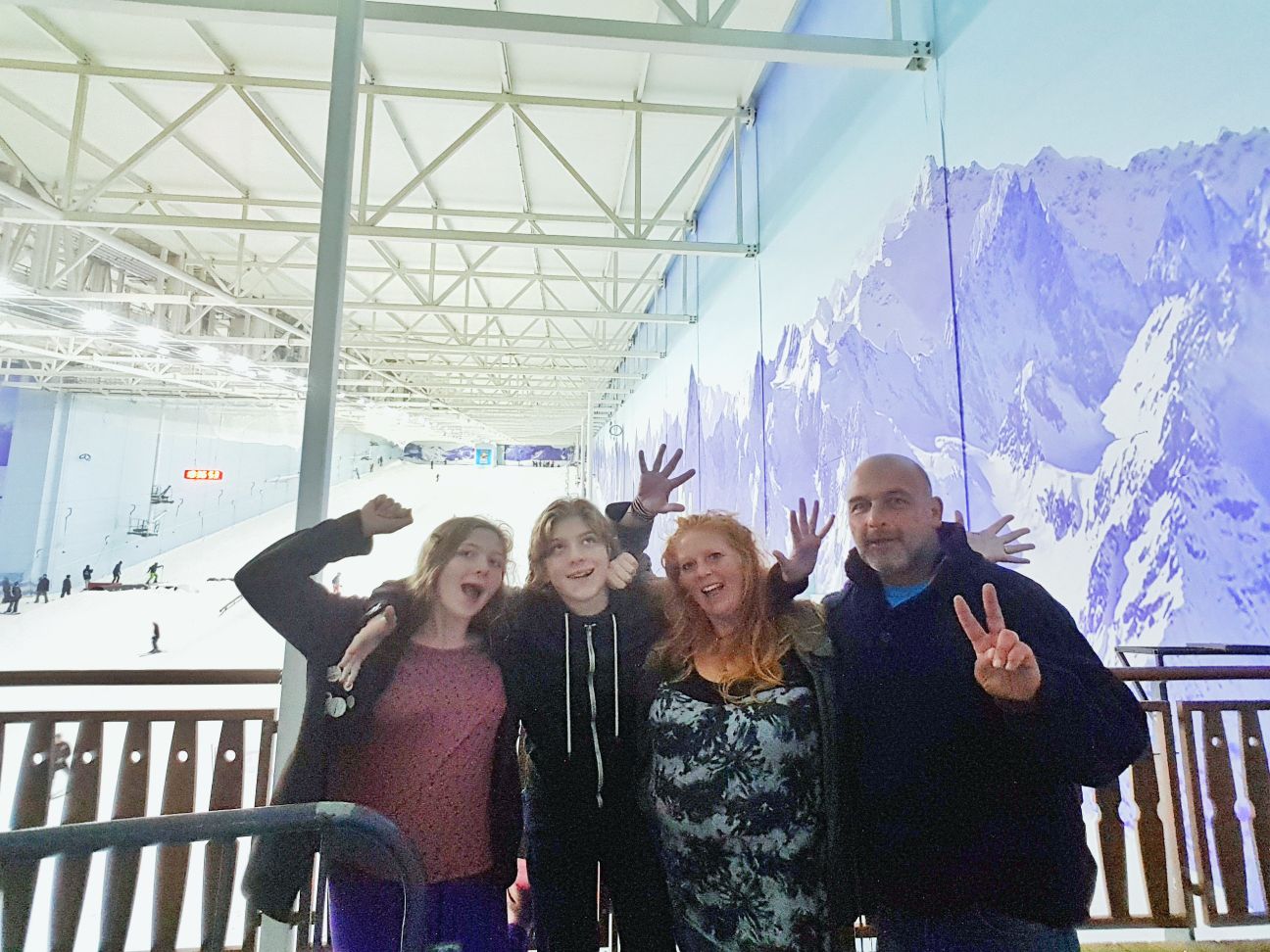 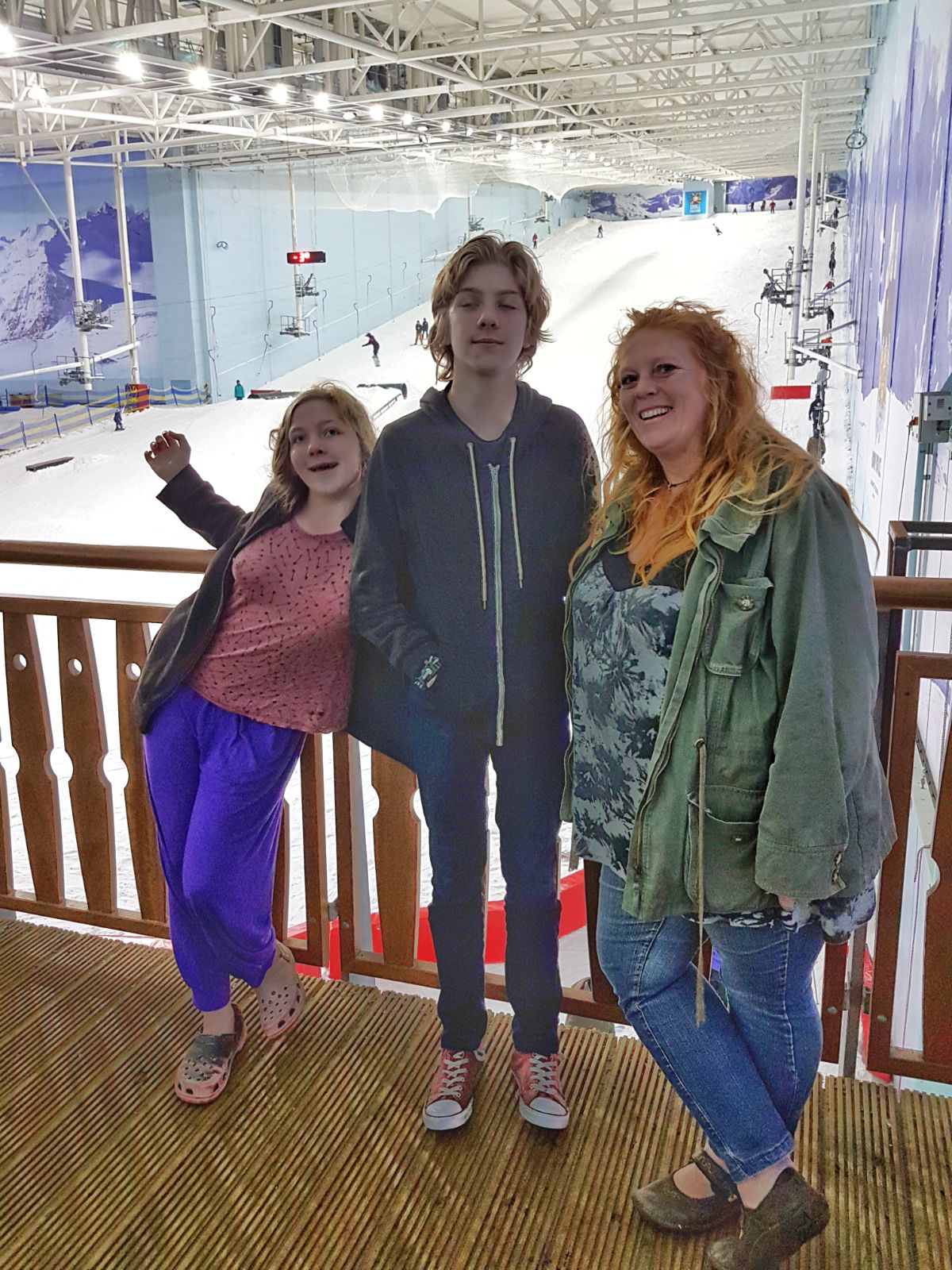 This indoor ski slope opened after we had already left Manchester but we visited it on a subsequent trip when both the children were still much smaller than me, unlike these days!

We went into the city centre on the metrolink tram, Davies had a haircut, Scarlett got some much needed new clothes and we enjoyed all the fast food, baths, TV and free wifi absolutely everywhere that the mainland has to offer.

We had arranged to bring one of Davies and Scarlett’s friends with us to the podcast show, which I went along to aswell and we had a great evening out in the city at a fabulous venue. 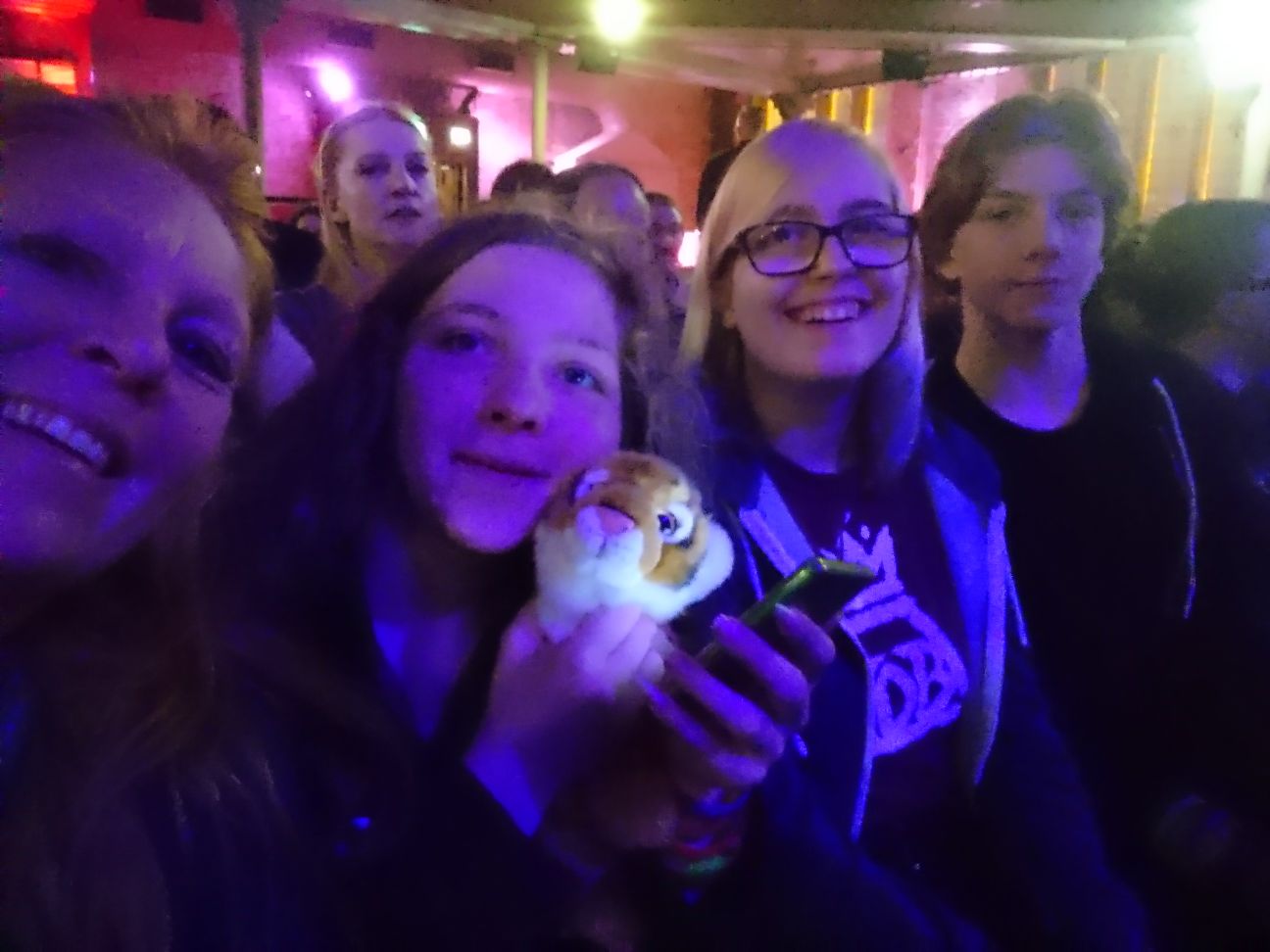 We ended our visit with a couple of nights staying with friends – the friend who had come with us. These have been family friends of ours for well over a decade although we have both moved around a lot. They have visited us here on Rum many times and it was lovely to catch up with them. Continuing in the spirit of the then and now picture pairs we found a snap from a visit to the, back in 2006 and took a new one. 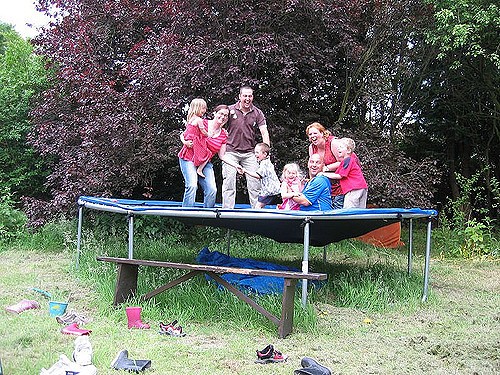 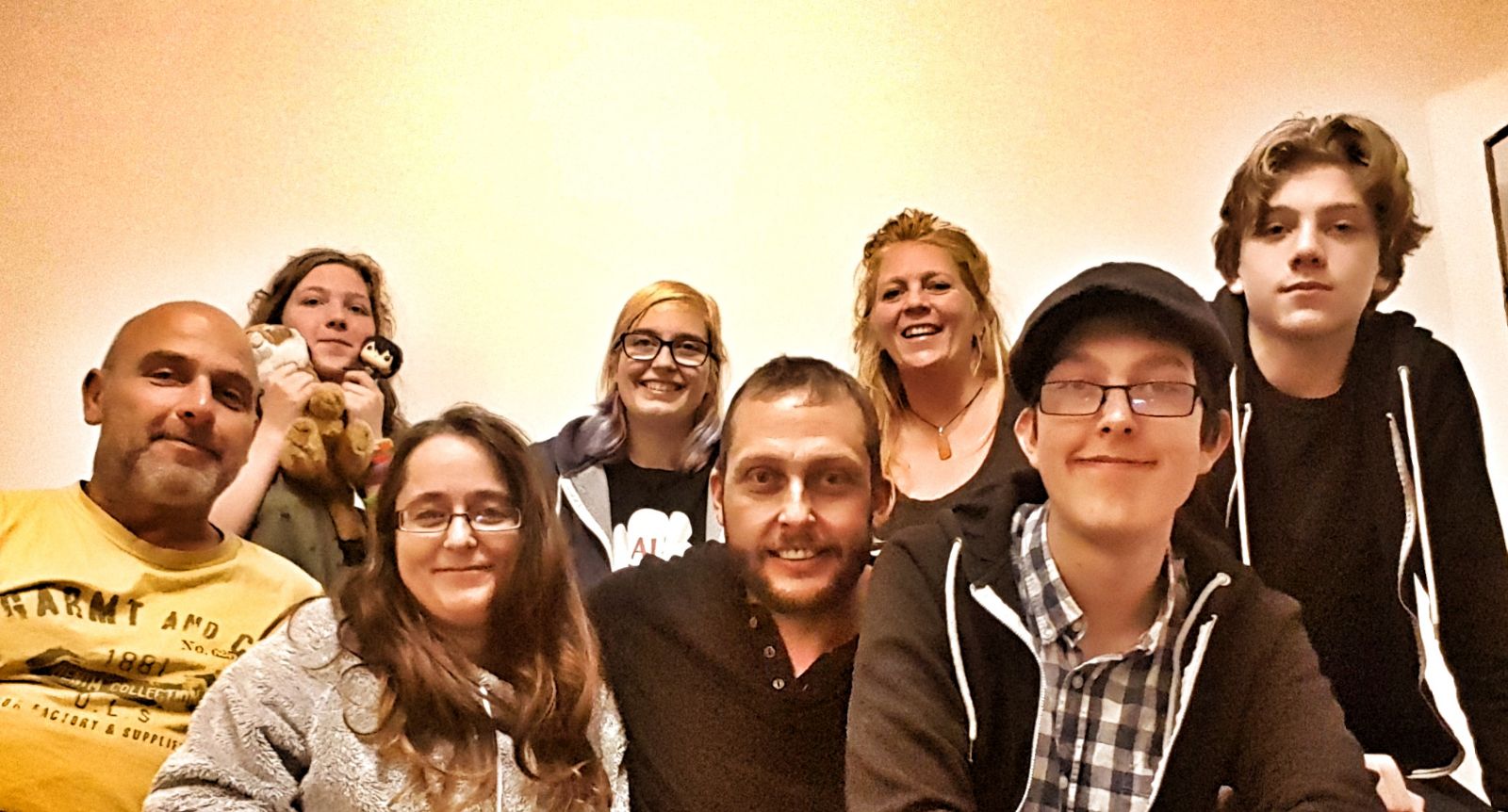 In classic Rum fashion the ferry back home today was on high alert risk of cancellation or disruption as it’s very windy here. We did manage to get home albeit on a rather rough crossing and after much trudging up and down the hill with luggage and shopping (Ady) and putting it all away (me) we are settled back in with the logburner lit, the cat and dog delighted to have us home and a rapidly decreasing number of days left before we head off for a much longer spell.