I’m aware I have lots of posts to catch up on but first wanted to answer a couple of questions about the venison processing and having not actually blogged about that properly I thought I’d do a whole post rather than just reply to comments.

When we went off WWOOFing last year one of the things Ady and I were keen to learn more about was butchery and processing and we did a little bit of that at Evergreen. When we arrived on Rum and discovered there was a chance to get involved in venison processing we were really excited and leapt at the opportunity. One of the other islanders had written an application and been successful in getting a lottery grant to set up a Community Interest Company. The grant will cover the start up costs involved in getting the business off the ground which include: training, tools, processing and packaging costs, insurance and various other equipment. Any profit not ploughed back into reinvesting in developing and growing the company will be passed to the community trust to be spend on further community development projects.

There are two directors (one is me!), a secretary and a further four islanders attended the training course (including Ady) to be self employed workers doing the processing and packing. We have an agreement with SNH to purchase culled deer from that at the same rate as they sell to game dealers and use the on-island deer larder to process them for a set fee per animal. We will then need to package, store and sell the meat.

There are about 1000 red deer on the Isle of Rum, a percentage of which are culled every year. More on SNH policy on deer management can be found on their website. As a meat eater myself I feel very strongly that we have a big responsibility to ensure the animals we eat have had a good life with high welfare standards, opportunity to act naturally and a humane death. I can’t think of a better example than the red deer here on Rum who are wild animals killed while out on the reserve.

Our training course was really good – Barry who came to train us is a master butcher with many years experience in both butchery and training to pass on his skills. Six of us from Rum Venison attended along with two of the seasonal ghillies currently assisting the SNH stalker in the red deer cull. Between the eight of us we had varying levels of previous experience but we all felt we learnt loads over the three day course.

I won’t post up pictures of the more graphic parts of skinning and butchering the deer – due to the red deer research project on the island parts of the culled animal go straight to the project so we are passed headless, footless, innardless animals which makes for a slightly less messy butchering experience than I was expecting.

We learnt how to quarter the animals, create various cuts and put aside the rest for processing. We spent time cutting steaks and other prime pieces, diced other meat into casserole and stewing meat and then learnt about mincing, mixing with pork fat and rusk and seasoning to make sausage mix and then filling and stringing sausages – a real art which some of us took to quicker than others!

We also did plenty of theory, about labelling and marketing, advice from Barry about what equipment we need and where we are likely to make the most money from the meat.

The stag cull is about to end and with the hind (female red deer) season about to start in just a couple of weeks and us waiting on delivery of freezers, packaging, knives and so on we have decided to start with our first three beasts then. Until then we are already doing well in sales of the meat we trained with and I think plenty of islanders have already sampled our sausages! We certainly enjoyed them for dinner the other night and are planning on venison curry, a venison roast and some delicious venison steaks in weeks to come. 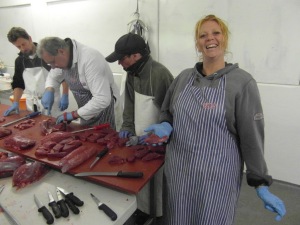 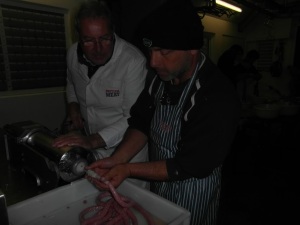