We’re in full on count down mode here with just over a week to go until we head off, assuming ferries run and any of a myriad possible happenings changes things of course. And the end of that last sentence demonstrates just how much Rum has changed me.

I’ve not been blogging so many of the logistical details of the pack up and shut down here as I did in the months leading up to our WWOOFing adventure although in many ways they have been very similar. I guess they didn’t feel quite so daunting this time around or worthy of documenting. I’ve also not been sharing the details of our plans – this is because they are still largely unformed. We know where we’ll be until Christmas but after that we are not sure. This is entirely deliberate as we need to check in with ourselves to see where we want to be. We have several firm options and a whole world of possible choices to explore more or think about. But the key reason for heading off is to work out what we want to do next and just as we spent time slowly working out what we wanted from life by testing out various possibilities when we were WWOOFing and travelling we are intending to do the same again before settling on the right location, arrangement and lifestyle. This means trying on for size and considering a few options and plenty of conversation between the four of us.

It’s a really exciting time with lots ahead of us – we are really looking forward to landing back on the mainland again and spending time with family and friends and are lining up lots of plans to see people, many of whom we have not seen since we left Sussex. We’re looking forward to seeing the opportunities that greater access to the resources the mainland has to offer and what that might inspire us to learn, to change, to get involved in.

Meanwhile though we are saying our own quiet goodbyes to all that we love about Rum and the things which bought us here.

It is six years ago that we were on Eigg, looking across at Rum every day as we walked on the beach and pondered ‘what next?’ 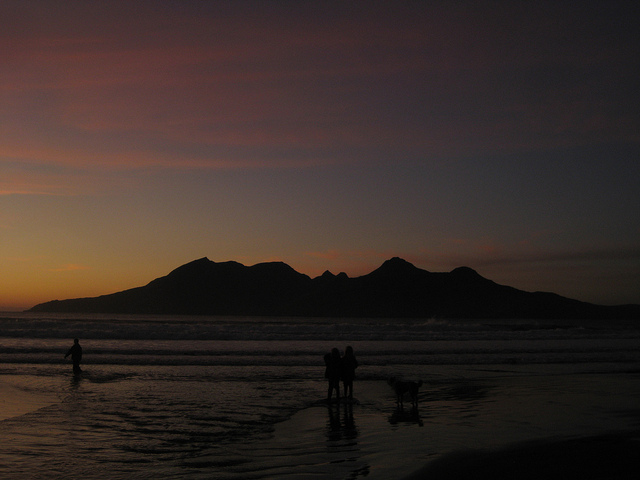 It was on Eigg that we experienced the sense of community living that most closely matched our own dreams of what that might mean. Various islanders collecting firewood and building the bonfire, various others smuggling over fireworks on the ferry (sshh!), others letting off the fireworks, bringing round the mulled wine, watching the fireworks together and then gathering afterwards at the tearoom for drinks, songs and games of pool. It was that night which inspired us more than anything else to visit Rum and look at the croft. We’ve now had six Bonfire nights here on Rum. They have ranged from the first one where the weather postponed the event but because we were not contactable no one could let us know so we stood in the rain until someone drove along to tell us and then we walked home, passing Davies, Scarlett and Bonnie across a part of the path where the river had burst it’s banks to this years with easily the best weather we’ve had – a clear night sandwiched between two nights of pouring rain and howling winds as though it was meant to be. We helped build the bonfire, Ady hoisted the guy built by an island child atop it and then supervised another island child lighting the fireworks, I bought the mulled wine, Scarlett handed out the sparklers and we stood watching the most amazing moonrise while laughing and joking with fellow islanders who perhaps know us better than anyone else ever has having shared our whole lives with each other day in day out.

I remember when we visited the island to be interviewed for the Croft walking through the village and looking forward to a day when we might walk with family or friends showing them the island and sharing it with them. 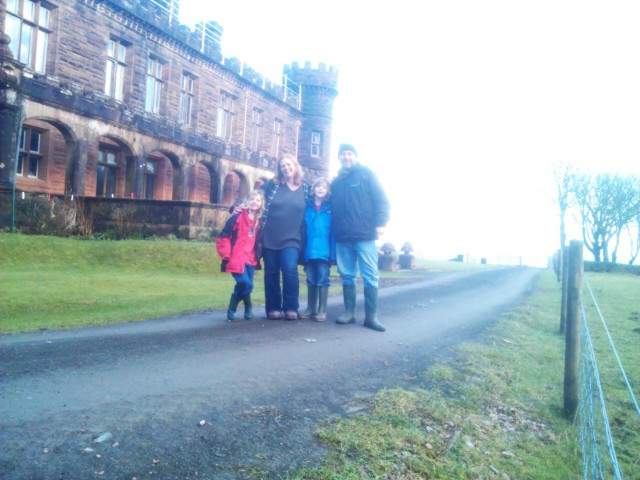 Last week friends visited again – their fourth trip to Rum and we managed to again show them a new corner of the island they had not seen before.

The first time we arrived on Rum on the ferry we realised how vast and largely unchartered Rum’s peaks and valleys were, with limited tracks criss crossing and strange sounding names on the maps. Some of those places are now familiar, others remain just names we have heard but in every direction I can see places we made memories. 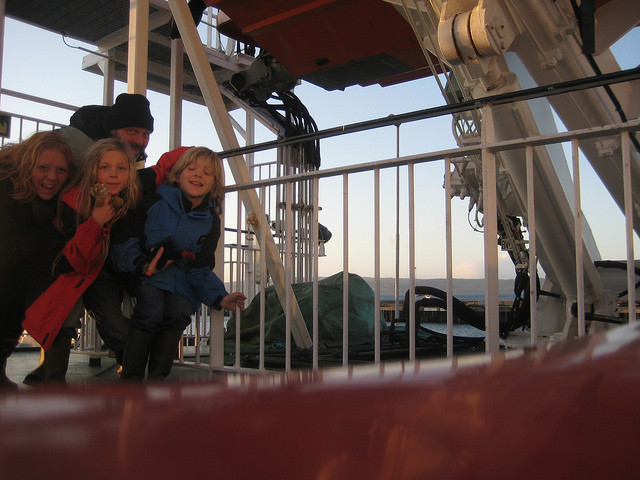 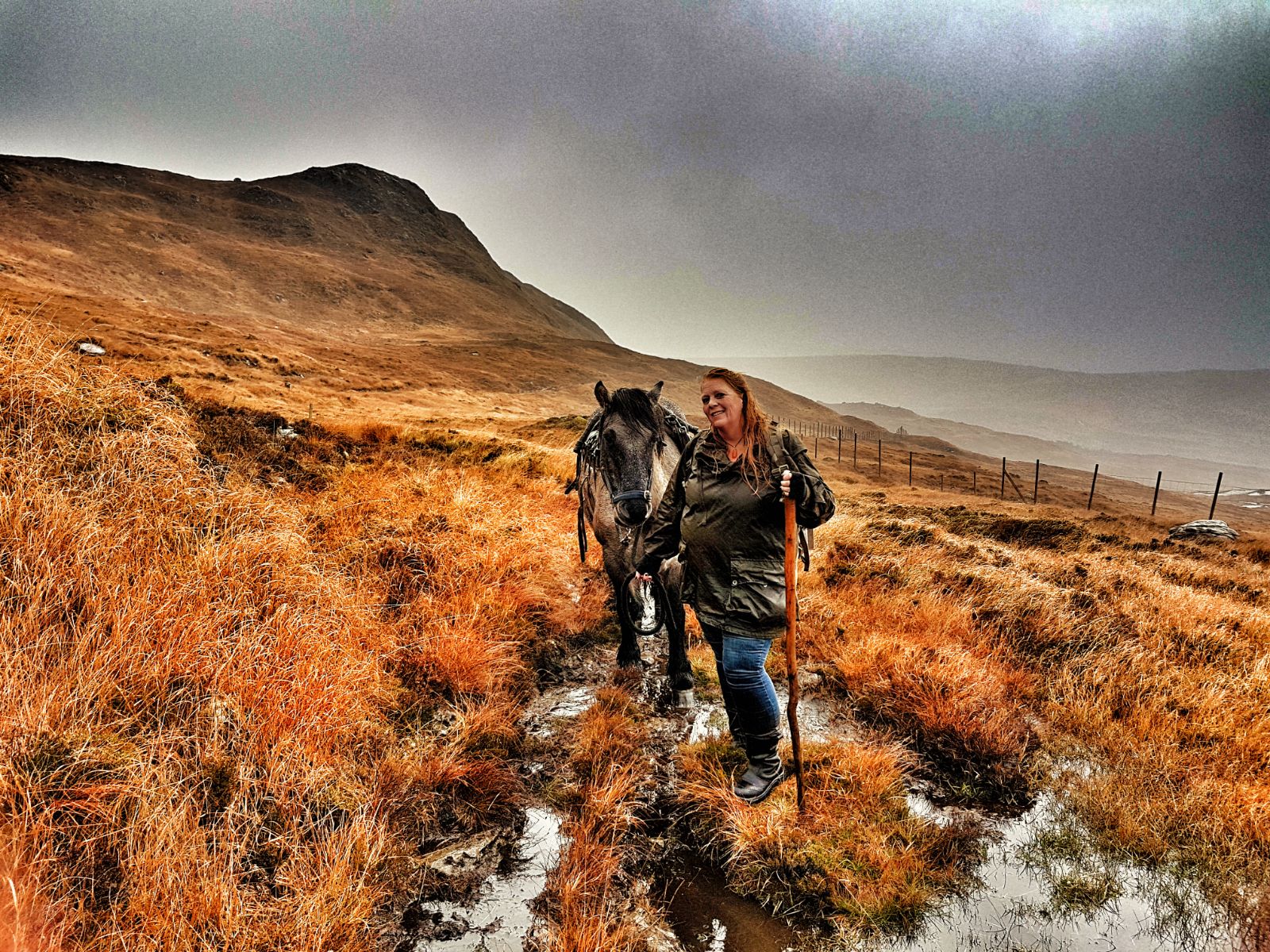 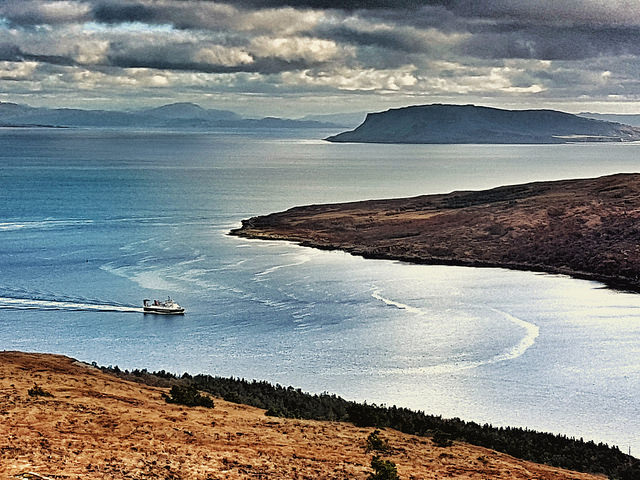 Last week I fulfilled one of my own personal wishes to head out with the ghillies leading the ponies into the wilds of the island. I only led a pony for a short distance but I walked out further than I previously have and have yet another tale to tell of life here.

So amid the more mundane tasks such as ensuring we have a dog lead and seat belt clip for Bonnie in the car and a cat carrier for Kira, sorting out our clothes to see what we should / might take with us and trying to decide what justified a space in the rather cramped car we are also having our little moments with this amazing island we’ve called home.

One thought on “The Lasts”