A very emotional day today here on Croft 3. And perhaps the fact it was emotional goes a way towards stressing the difference between commercially successful farmers and us.

We said goodbye to the last pig reared for meat – now in the freezer and goodbye to Barbara pig, our original mother pig. It was a really tough decision, one of the hardest we have made and certainly not taken lightly or without quite a lot of tears shed. But it was the right one in terms of welfare for Barbara (she was well past her breeding prime so attempting to re-home her would prove pretty much impossible, involve the major stress of getting her from the croft, onto the ferry and further transport to a new home, introducing her to different conditions and so on).

Instead after much soul searching she is now buried with Tom, her original pig partner.

It has been our adventures in pig keeping which have probably taught us most here on Rum. We have had some crashing lows – losing piglets, losing older pigs, the saga of Bob and Blackie, processing pigs in all sorts of weather conditions, chasing escapees, frequent moves from one area to another, losing all of our salami and chorizo when the polytunnel blew away, losing a joint of gammon when an unseasonal hot spell interfered with the curing process. We let our pig numbers get too large, like every single pig farmer we have ever met had also done. We let our pig feed bills get too high, again like every other pig farmer we have ever met. We have had some amazing highs – being present at births and resuscitating ailing piglets, realising that both Tom and Barbara were fertile and good parents, making sausages and bacon and butchering quite literally in the field.

Tom and Barbara were on TV, mentioned on the radio and in magazine articles and blogs, they have been photographed and petted by so many visitors to the croft. They were not pets, they were livestock but the lines certainly got pretty blurry.

It’s the closing of another chapter of our lives here for sure and while I know it was the right thing to do and am at peace with the decision my heart is sore today. 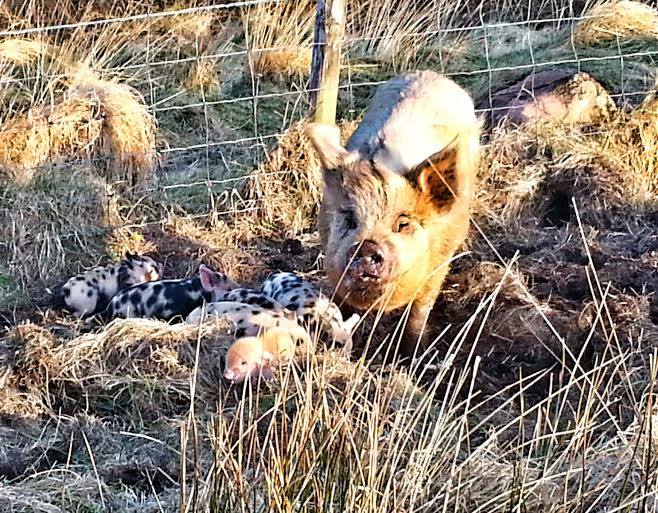 One thought on “The last pig day.”