The Croft 3 creatures all have to be at least dual purpose, preferably more. So the birds provide us with eggs for ourselves and to sell, feathers for crafts and are also used to fatten for our own table, for selling on as livestock or to carry on breeding the next generation. The pigs prepare and improve the croft ground and feed us.

The sheep are our newest acquisition livestock-wise. As ever we started small with a flock of just three – bred and reared on our neighbouring Isle of Muck. Keeping it local, supporting the neighbouring farm and ensuring we were taking animals used to the conditions and climate of the Small Isles. They arrived with us in August last year. We took three ewes – not just two incase we lost one, all girls because we wanted to ensure that they were going to fare well on Croft 3 and on Rum, not more than we could confidently manage and learn with.

We had worked a little bit with sheep before. I worked as a volunteer shepherd for the local council back in Sussex doing a few shifts each month of checking the various small flocks scattered over council owned chalk downland to graze the pasture without impacting on the land. Although I had a weekend of training which included handling sheep a fair bit I never actually had to use those practical skills during my shepherding stints. While we were WWOOFing we worked at several places which had flocks of sheep. We were around for some lambing and some shearing and some breeding but none of that experience ever compares to keeping your own livestock.

We had concerns about the climate and conditions of the croft / Rum for sheep and all they would face in the changing seasons here. Winters are harsh in terms of being very wet and windy but we have various shelters all over the croft for the livestock but heavy fleeced sheep carrying around wet cold fleeces can be pretty miserable. Their feet can struggle with the soft constant mud and the boggier parts of the croft are a haven for the snail part of the life cycle for liver fluke. During the summer Rum is notorious for ticks, midges and clegs all of which will plague livestock, plus of course the usual sheep concerns of flystrike. So we’ve embarked on a careful regime of vigilance, taming the sheep to be hand fed and stroked so that inspecting and treating them is fairly easy and stress free for both them and us and so far they are faring very well.

Our first big challenge though was shearing them. Having ensured they are definitely not pregnant (despite our careful plans two rams from another croft on the island were regular visitors last autumn and were discovered to not be as castrated as first thought meaning there was a slim possibility of lambs. That was very much not our plan so we were very relieved when the potential due date came, passed and is now long gone. We’ve had a very warm May and the sheep have been increasingly looking uncomfortable and fed up in their very thick fleeces. We’d had a few offers from folk we know who can shear and had more or less arranged it when a friend who is very knowledgeable about sheep announced he was coming for a visit to the island and would bring along his shears and give us a lesson.

Today we caught sheep number 1 and she very patiently (and calmly) allowed our friend M to show Ady and then supervise as Ady continued the job. 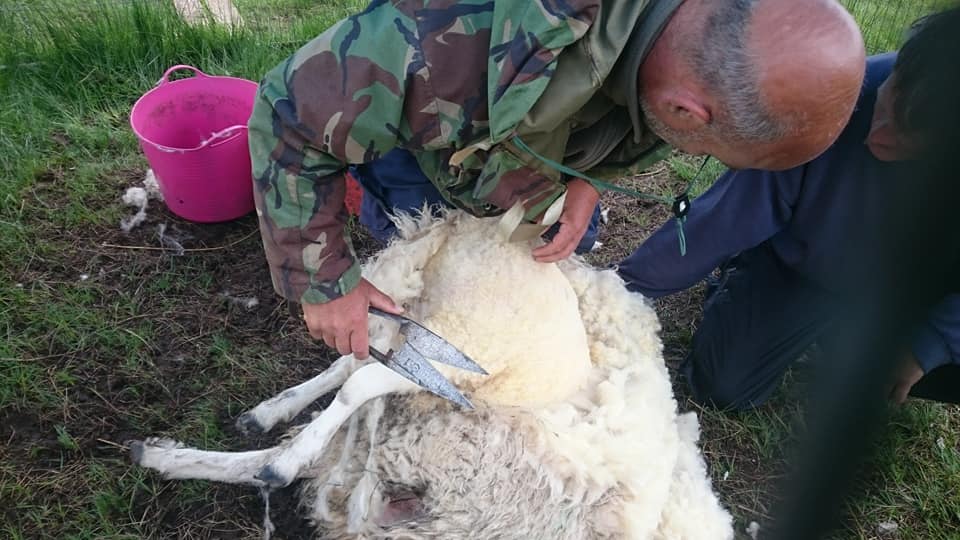 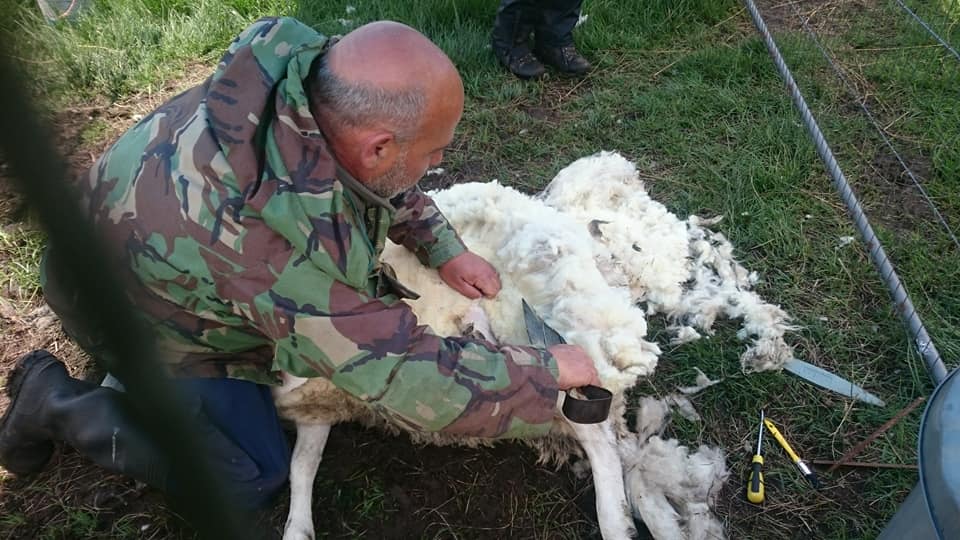 She looked so happy and relieved to be free of that fleece and has been by far the most active of the three sheep for the rest of the evening. 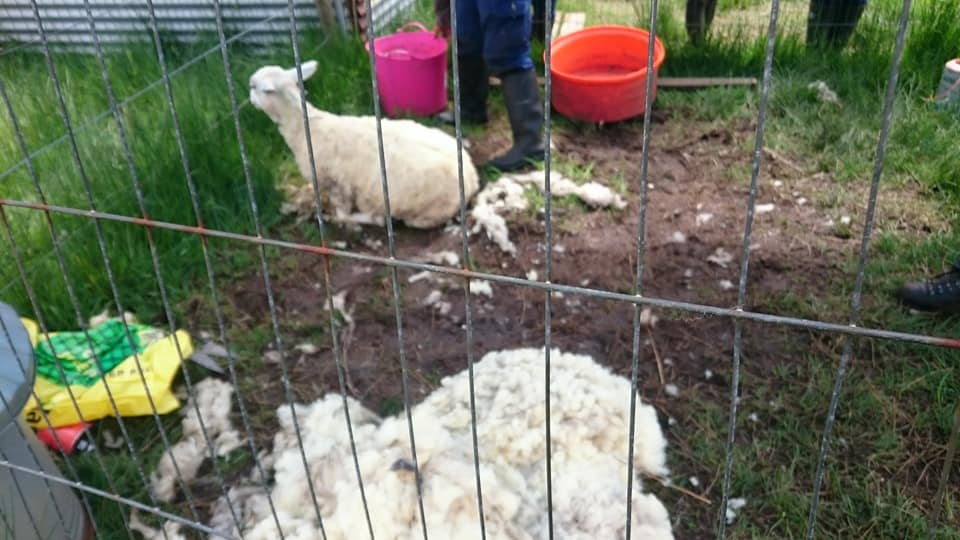 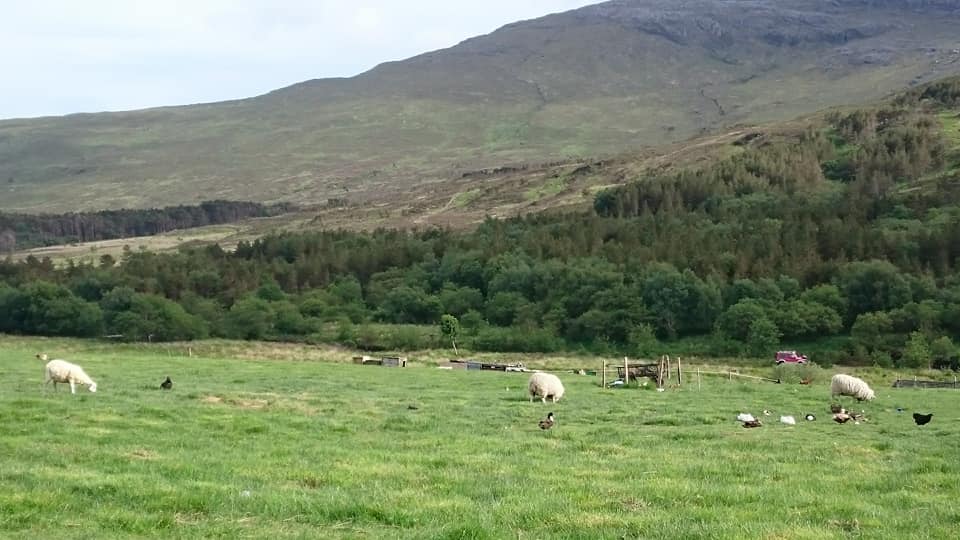 Leaving us with her fleece. 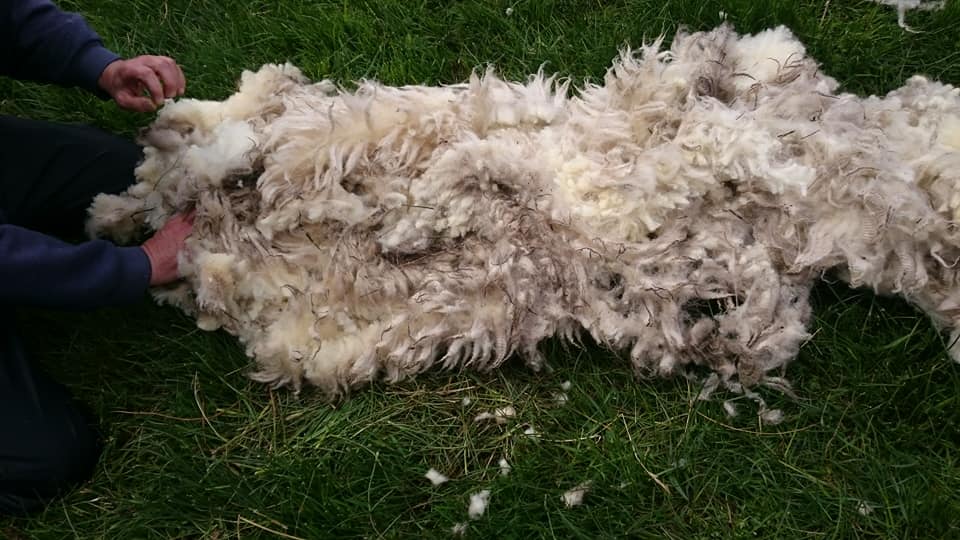 And if our friend M is a whizz with the shears then his wife D is cleverer still and came armed with her travelling spinning wheel! Sat out on the sporran, with an appreciative audience of Rum folk who had come up to watch D spun a small amount of the fleece which I then crocheted into a small square.

Our first fleece from our first sheep spun and turned into our first square. All within about 20 minutes of coming off the sheep’s back. 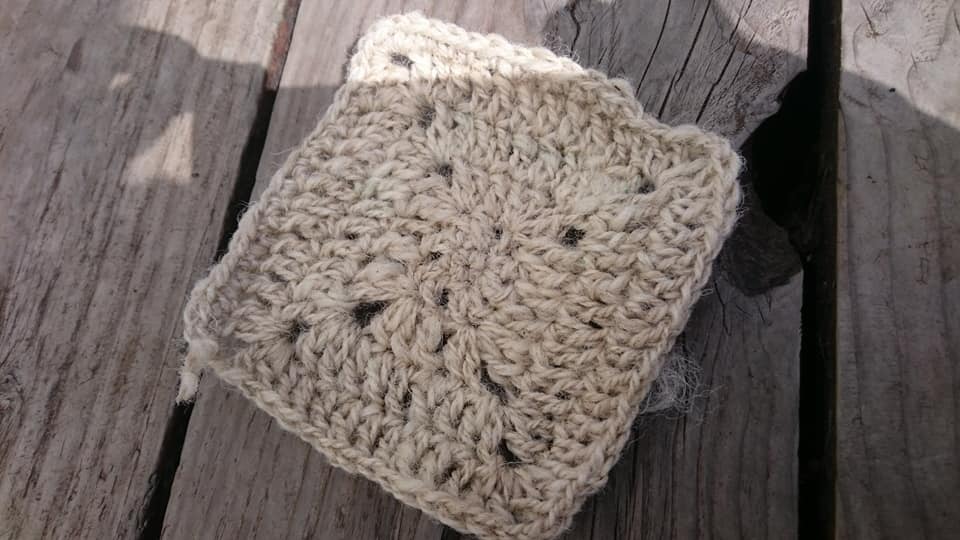 I love it when our self sufficient ambitions pay off in the shape of delicious food. I also love it when we are able to create material we can craft with or even clothe ourselves with.

One thought on “Take that coat off – so I can wear it.”