Because it’s raining and I don’t fancy walking back up the hill in the rain so I’ll hang out here with internet a wee while longer.

We spent a couple of days up on the croft cobbling together a duck hut and a chicken coop. After various agonising about just how to house our birds including looking at very expensive housing online, being offered a temporary home in someone else’s chicken coop and clearing out the front section of our horse box just incase we got out out John Seymour book and found inspiration!

Our chicken coop is built from mostly wood. We nailed (using rock tent pegs, the only thing long enough!) two long pieces together to create ends, braced them with smaller bits and dug the poles into the ground a little to give it stability. We then nailed more wood in various places to create a frame and put a pole across the top then made a floor with two pieces of heavy duty plastic and a roof with black plastic sheeting. The ends were cut to size plastic sheeting too and the door closes with string fixed. It doesn’t need to be fox proof and hopefully rats won’t bother climbing up so this should do our flock.

Our duck hut is a wheelie bin! Laid on it’s side with holes drilled in the base (and the door never fully sealed closed). We have covered it with dug out peat and reeds which will hopefully continue to grow to give it a living roof, it also helps give it stability and strength. The door has a bit of a woven twig thing going on although it needs a bit of work.

The whole area has been fenced with stock fencing (about 10 m square area) and they have their feeders, a water tray and plenty of wood to perch on. Eventually we plan to include a portion of the drainage ditch that runs through the land and has free flowing water so the ducks have places to splash and bath.

The birds arrived on the Saturday ferry – ten hens, all rhode island reds, some have names but I forget them all aside from the one I named, Mrs Nesbitt, a cockerel (he’s sort of black and white speckledy with a very floppy comb) called Dave and five ducks who are still squeaky rather than quacky and have fluff instead of feathers in places. 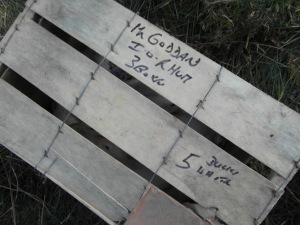 And a quick view of the housing and fenced area. It’s starting to look more like a croft and less like an unused field. Well a bit anyway!

Next on the list, pig preparation (we have two ready to make the trip across the water as soon as we’re ready for them), compost heap building and getting the paperwork side of things moving so we are ready to start applying for grants to assist with bigger stuff such as polytunnel, maybe some machinery, laying a track for access and getting our orchard up and running.

2 thoughts on “Spoiling you!”