Another lovely afternoon down in the polytunnel for me yesterday. Sun shining, enough breeze blowing through from the open doors either end to keep me from overheating, compost under my nails, surrounded by seed packets. Bliss.

I rearranged things in there again – funny how my outdoors housekeeping is always so much better than my indoors! I dismantled the shelf units as they were casting shadows on the shelf below and I ambitiously hope that plants may grow taller than the space between shelves eventually. So a little modification, some tying legs to the polytunnel frame (the shelving legs, not mine!) and I think it works really well. 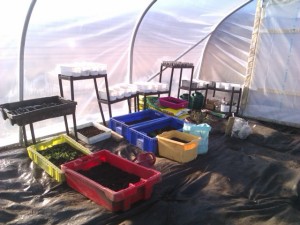 With the exception of £20 spent on these shelf units all of the other containers are foraged or free. Several of the fish boxes have been scavanged off the beaches here on Rum, washed up after storms or high tides. The white and grey containers you see on the shelves are ice cream tubs donated from the castle kitchens for us to re-use. There is a cat litter tray I bought for use during our very brief period of cat ownership last year, the plastic base from Star’s hamster Humphrey’s outgrown cage and the pair of old wellies.

Some of my seedlings are sprouting which is very exciting. I have transfered some of the wee seedlings I planted in egg boxes into larger containers now. Here is some coriander 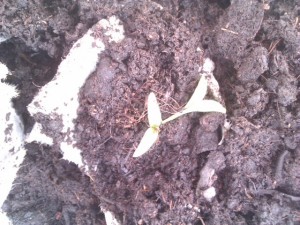 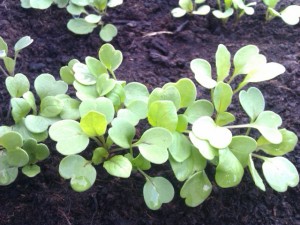 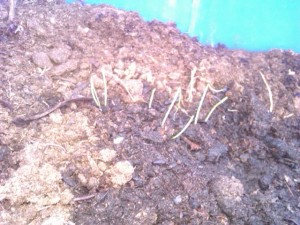 I replanted the cucumbers, courgettes and peas that had been moused. I also put in some carrots and parsnips in deeper boxes. some garlic in another fish box and checked on the progress of various tomatoes and chillis. Those that had done nothing were leaving it too late to germinate so I have started again with those too. I now have a whole tray of peas in egg boxes, raised off the ground and am planning to spray the sides of the box with WD40 which Ady tells me is not only a nasty smell for mice it is also very slippery so stops them scurrying up the box. We’ll see… 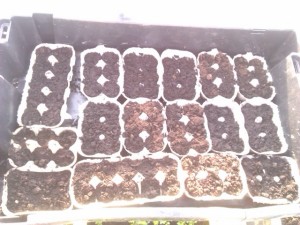 In other news today has been meeting-tastic with a board meeting of the IRCT directors this afternoon and then the Rum Community Association monthly meeting this evening. Nearly four hours of meetings means I’ll no doubt dream of minutes and action plans! It’s rained and rained and rained today which has meant walking to and from school and the village several times has not been a delightful experience but the river is running high which always pleases me as I love the extremes of it and I still found time to visit the piglets, water the things in the polytunnel and chat to the birds as I walked up the croft earlier.