It’s been a lovely February day today. Not particularly sunny but it’s stayed dry and still all day and been perfect for getting outside, getting things done and starting to feel the promise of spring in the air.

We got some laundry done which still has a massive novelty factor after nearly 3 years without a washing machine that is neither coin operated or a long way from home. Ady fixed a couple of broken slats on one of the pallets surrounding the static, did some repair work to the log burner flue and generally tidied up a bit. I took my axe and a pocketful of nails, some netting, a hammer, a ball of twine and my penknife and headed down to the raised beds. My autumn sowing of garlic has already come up with green shoots and is getting eaten by the chickens. I am not entirely sure how it will fare coming up so early really but want to give it a chance rather than let it be chicken feed! I always did autumn sowings of onion and garlic down in our south coast allotment and they did far better than the spring sowings which tended to bolt and catch up above ground but be smaller and less sweet below ground in the bulbs. This was garlic we had had in the kitchen which had sprouted so cost us pence and was worth a punt. I had another bagful to plant out today too and will do at least two more successive sowings over the next few weeks so I can compare results.

I cut down some long straight switches of wood – some was alder, some was hazel, from some coppiced trees. Very green and easy to work with and bend, perfect to make netting supports. I tried with a couple of different designs and think the hoops work best and will probably be most wind resistant. I will see how they all fare over the next few weeks but have cut down enough switches to net all ten of my current raised beds, three of which now have garlic in.
I have been given some more wood which will make more raised beds, I’d like another ten at least, plus I have earmarked another six wire mesh panels to create another cage like our fruit cage. I think we will make a deer proof orchard tree area with them, just need to decide where. I have my first stash of seeds ready to start planting in the polytunnel but first it needs a really good tidy up and sort out in there. It did not fare well in the winter storms, one door has come off completely, all three of the others are loose. The heat tape is dangling in all areas as the polythene is too loose and a couple of the support struts need further supporting. A rat got all my seeds and various things have been blown about. I need to spend a good couple of days in there working methodically through all of these things and creating a nice space to be in again – at the moment it is more of a scene of devastation and makes me feel sad to be in.
The fruit cage netted cover needs attention too but we had to fix the gate on by tieing it during storms so that needs fixing so that it opens and closes and then I can get in there to attend to that. One good day outside down in the growing area and I am re-enthused to get all these things done. It’s forecast to rain tomorrow – I may need reminding of this energy again when it is dry, although I can get in the polytunnel in the rain…
While working down in the raised beds the birds were all around me, mostly the chickens as they love to come and scratch around when you are digging, in search of worms and anything else interesting you may turn up. We have a LOT of cockerels from the massive numbers of chicks we had last year and they are all suddenly finding their voices. The most cockerels we have ever kept for any length of time was four bantams back in our garden in Sussex, it was only when keeping them I realised that every cockerel has his own individual crow, like a theme tune. They have different numbers of syllables and each beat can last a different length. It is not just the standard cock-a-doodle-doo. We lost our original Croft 3 cock during this winter but will be keeping the current king of the croft – Elliot, a refugee from the village. Of the new cockerels we will keep a further three I think, in our chicken keeping experience keeping a couple of extras means they stay a bit less feisty and dominant and keep their attention on the hens and each other. With such a large area to roam there is no real worry about having extra boys and they cost so little to keep. We have been watching them today and deciding which will be keepers – there is a speckeldy boy who looks like his dad Dave so he will be staying, a pretty black and white boy who has a matching hen and there is a creamy one who has a lot of character. There are lots of traditional looking rooster bantams too but I think they are all destined for dinner! We will give them a couple more months of fattening up and enjoying the free range lifestyle before we start to despatch and process them. It was lovely being down among them today and listening to the boys all finding their crows and practising them in a sort of male voice choir. 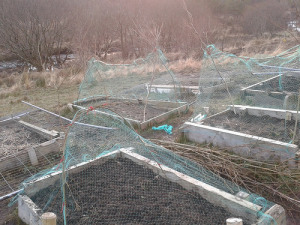