This week has been lots of meetings. Someone from DTAS came to visit Rum and showed a short film and talked about what membership of their organisation could offer the Rum Community Trust. We had our monthly Resident Association meeting with a lot of stuff on the agenda including Dragon and Star presenting some of their ideas for a playpark for the islands resident and visiting children. We’re hoping to get some funding for something to be installed so as key ‘stakeholders’ Dragon and Star are involved in consultation, design ideas and hopefully at some future point testing out the end results. Some of us stayed behind after that meeting to discuss housing – our biggest issue here on Rum by far. We’d had a visit from the local council planning department which was far from helpful and reassuring so a letter had been written expressing our disappointment and we’d had a reply which needed looking at and further action being planned. Finally there was a meeting of the Visitor Management Group which I sit on and meets to implement the visitor services plan designed to ensure all day trippers, holiday makers, visiting groups for education, walks, family holidays – in short anyone who steps foot on Rum – get the best possible experience. In between all this I have been collecting, editing and arranging all the content for the second issue of the residents newsletter which will be printed and distributed tomorrow.

I’ve also worked at the school four mornings where this week in nursery they were learning about dinosaurs, a topic I had my own small four year old very interested in once upon a long time ago so was lured in at least once during the week to natter about fossils, stegosaurus, triceratops and pterdactyls, the Natural History Museum in London and how we don’t really know what colour dinosaurs would have been. I also brought back the pine cones we collected the week before which were all closed but are now all open after a few days in the warm office. I’ve put up some pictures of Dragon and Star next to my desk and done some rearranging to make it all feel more like my space.

All of which meant there was far less time for crofting than I’d have hoped! But I did manage to create one raised bed.

I’ve spent some time with Bonnie doing training – clickers arrived this week in the post so we’ve been getting her used to that and teaching what is probably her most important command – COME BACK! We have not cracked it every time just yet but we’re making definite progress.

Today was Mothers Day and I was presented with two fabulous home made cards and a bunch of flowers. 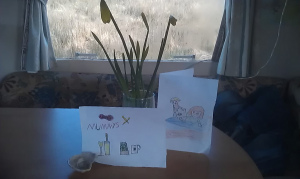 And very excitingly we spent some time marking out our potential house plot with stakes and tape. We stood in the space that may one day be our bedroom, lounge, kitchen and got very excited at such prospects. 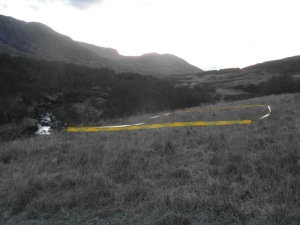 Tomorrow I am off on the ferry for a very busy few days looking at visitor centres on Skye and the Western Isles. Lots of driving, lots of ferries, lots of soaking up information to bring back and relay to the others. And to think I used to consider myself busy in my old life….