We found out yesterday that our current hosts will be our penultimate ones as the next place we had lined up for WWOOFing at has had to cancel due to ill health. This leaves us with about six weeks worth of free time between hosts.

We do have a reserve list of hosts and at least three places who asked us to get back in touch nearer the time when we approached them about WWOOFing earlier this year. We also of course have the WWOOFing book and could contact any of the hosts listed but we are planning to take the time to travel instead and see how we fare on a limited budget.

Our current hosts have a great knowledge of Scotland and are able to recommend some interesting places to head for so our plan is to draw up a rough route taking in all the various sights, based around petrol stations to ensure Willow is kept topped up (apparently they can be few and far between up here). We’ll keep some very basic food rations in the van so we are able to make bread, rice and pasta etc. and then try to top that up with what we can find along the way. It will be exciting, we will be pioneers, we will learn new skills and emerge as hunters, gatherers, foragings. Or we’ll go to bed hungry and miserable and all get really hacked off with each other when our blood sugar levels dip too low and there is no milk for tea!

Phase one of our catch it, kill it, cook it, eat it adventures began yesterday with fishing. Dragon, Star and I have never fished before although Ady did a spot of fishing in his younger days. We all had fishing rods – Ady and the kids got them for Christmas and my lovely friend Helen bought me a rod as a leaving present. Our fab friend Mich bought Dragon a fishing book so we were well prepared. 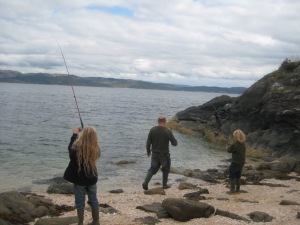 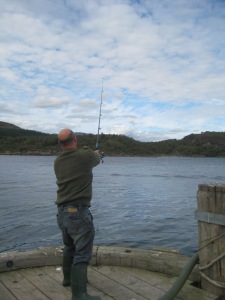 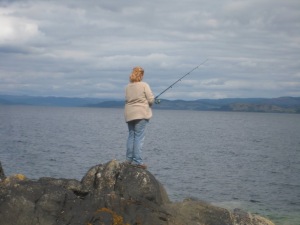 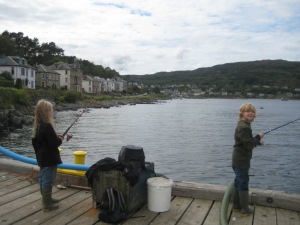 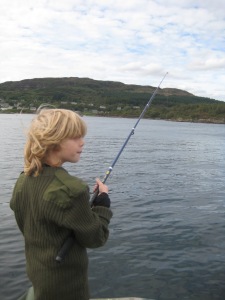 Now success is a real subjective thing I feel – sure the fact we caught nothing could be considered a failure but we’re choosing to view the afternoon as a coaching session, learning how to thread up the rods, various knots to attach various things, we know about ledger weights, coffin weights, bullet weights and the right times to use them, lures, spinners, bait, half blood knots, loops knots, what a swivel is, how to cast, how to bring in two lines which have crossed each other. Surely we need to save the actual learning how to bring a fish in, kill it, gut it and boast about how big it is for another day?  We did see a seal, jellyfish, starfish and various seabirds too which I know won’t appease hunger but perhaps we can just dine out on our stories?!

We have another week here and then a week at a campsite with friends after which we embark on the next bit of the adventure. Where internet signal allows I will update daily with how we are faring on finding somewhere to park up for the night and something to put in our tummies.

8 thoughts on “Rolling with it”