All of life is a journey, so they say. Certainly the last four months of our life have provided some fairly epic journeys. Both the path of discovery type journey but also the travelling around the place, by ferry and car, laden with belongings, cat and dog.

Our first trip from Rum to Sussex way back in November was a long one. The ferry away from Rum only happens in the late afternoon meaning onward travel is always pushing late into the day. It was already dark by the time we left Scotland and we still had the full length of England to travel, which mean the trip spanned two days, arriving in the early hours of the following day.

Our trips between Sussex and Somerset were a breeze in comparison, despite our maverick sat nav and the quality of rural Somerset’s B roads.

We left Sussex and headed for Wales on the eve of Storm Eleanor in January. That was not a bad trip and we broke it with a visit to friends. It felt like a departure from our usual ‘Get in the car and drive ’til morning’ roadtrips with it’s sensible planning and sociable travel times.

Of course that was all scuppered by the onward section of the trip the following day when a carefully planned ferry trip followed by a drive to arrive at a very respectable 5pm, travelling through an unknown country on unfamiliar roads in daylight didn’t quite go to plan. Cancelled and delayed ferries meant our intended midday sailing actually happened at 11pm after we had sat in the queue at the ferry terminal all day and all evening. The Bureau de change on board was closed so we had to divert past the toll roads in Dublin as we had no euros (little realising we could pay by card and unprepared to chance being turned away and adding yet more distance and time to our travels). We finally arrived at the destination of our rented house in Ireland at 5am.

So to the final leg of our winter off island adventure – the return to Rum. Earlier than planned but the start of meteorological spring – March 1st. Attempting to avoid two overnight stop overs – expensive and stressful for the cat and the dog we decided to time most of our driving for daylight hours with the ferry crossing through the night and time spent waiting at the port for the ferry for sleeping. We knew it would be compromising a full night’s sleep for Ady and I (teens are largely nocturnal and good at in car sleeping anyway) but it seemed the best plan.

At 4pm we left County Mayo. 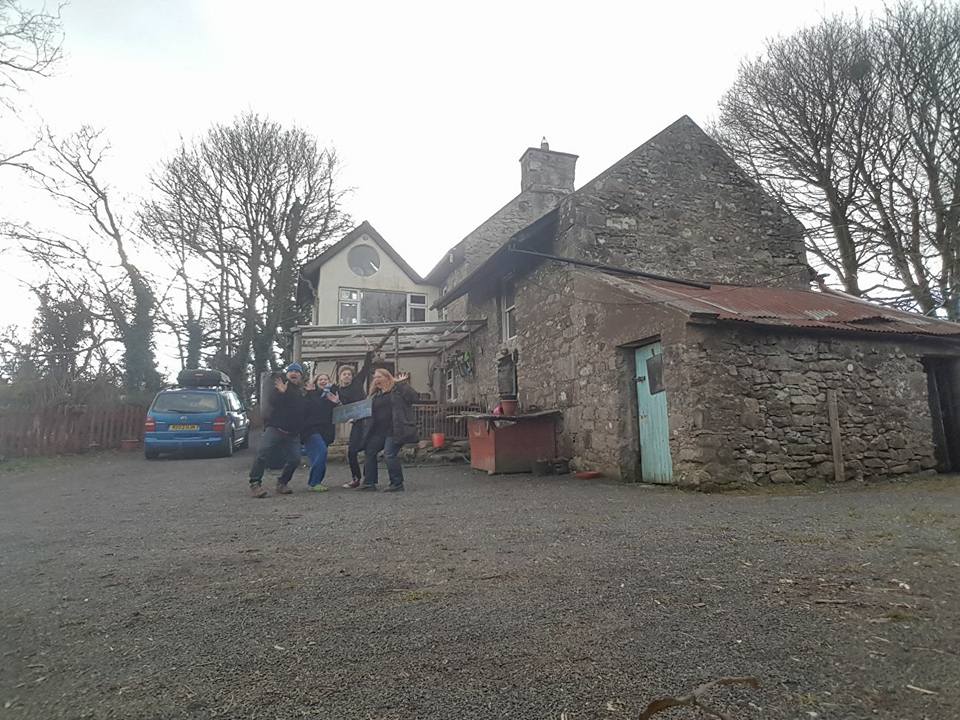 By 9pm we were back spending sterling instead of euros on breakfast-y food for the following morning and fast food for dinner. 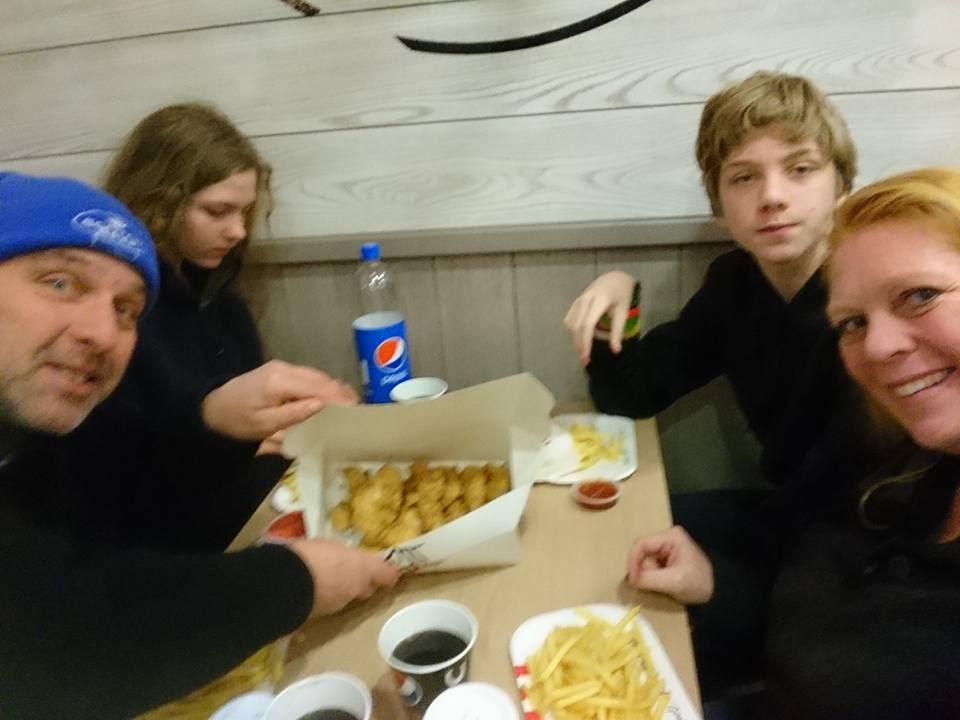 The intended plan was a few hours sleep in the cosy car before boarding the 4am ferry. The reality was news reports on the radio urging no non-essential travelling, friends contacting us offering beds for the night and a safe space to stay on both sides of the Irish sea and a distinctly un-cosy car despite blankets and body heat of six creatures thanks to a plummeting temperature outside. We decided that we would have more options on the mainland than in Ireland and managed to arrange to board the earlier midnight ferry crossing. The ‘Beast from the East’ was on it’s way and despite seeing no sign of bad weather other than speedily decreasing temperatures even us experienced traveller types were starting to believe the hype.

The crossing was smooth and straightforward – well done P&O ferries, you impressed us much more than your further south competition Irish Ferries had done a few months earlier (I did complain and have vouchers I can redeem against my next -unlikely to happen – travel with them!). As we headed north through Scotland we did begin to see increasing signs of bad weather and then suddenly we hit the outskirts of Glasgow around 4am with a handful of vehicles on the roads, neon signs flashing the message ‘avoid road travel’ and terrifying road conditions. 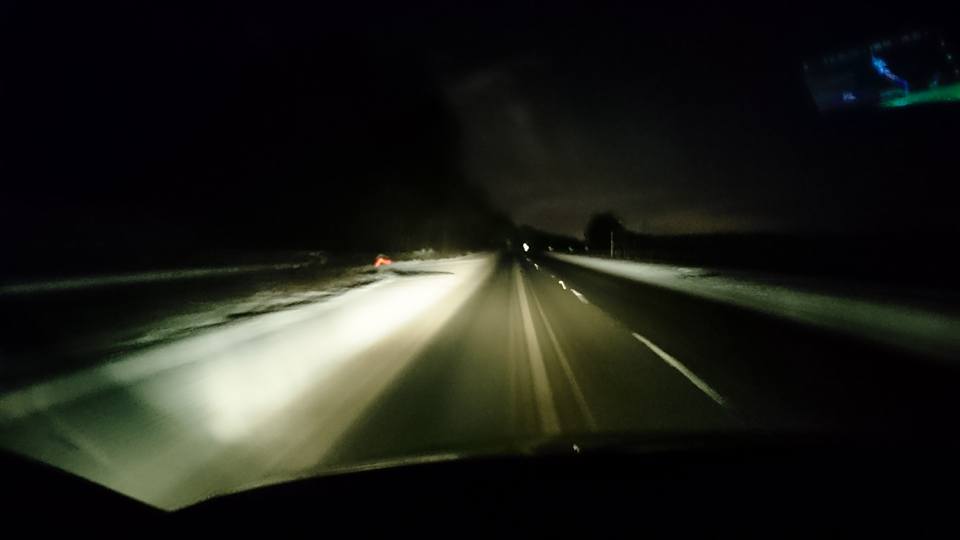 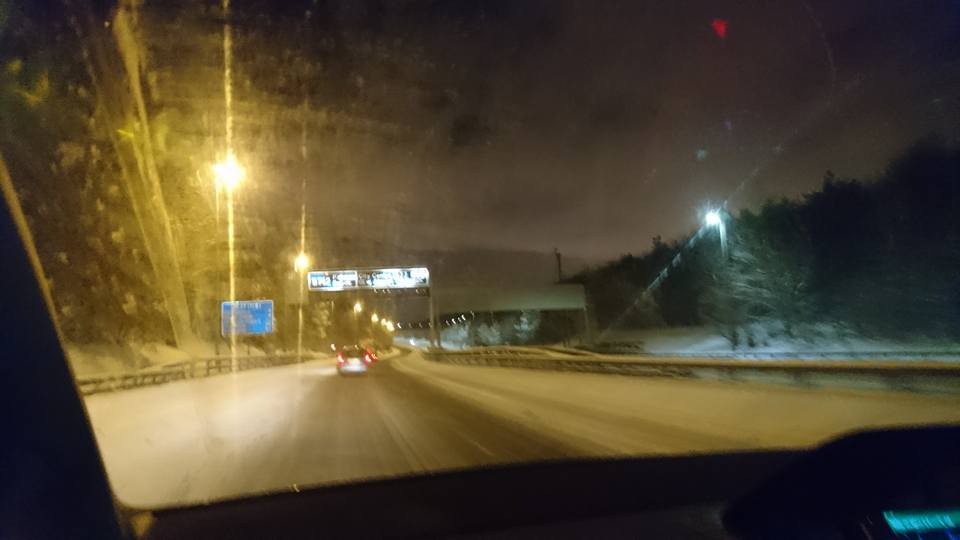 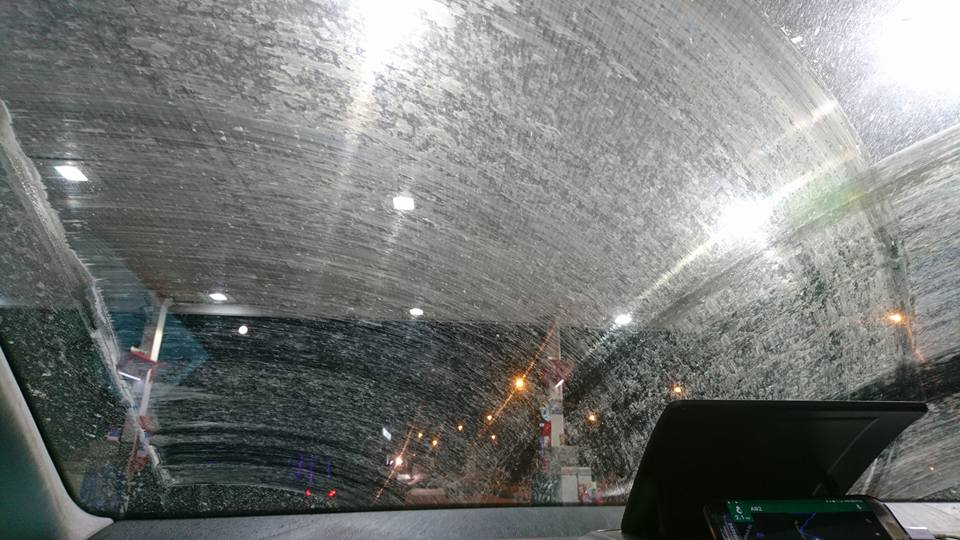 We discussed our various options – driving along at 20mph, stopping every few minutes to douse the windscreen in water as the washer bottle had frozen despite being almost neat concentrated screenwash – we could push on, driving carefully, we could try and find a hotel which would accept the cat and dog although we were aware that this was merely the forecast start of the bad weather so we may well be stuck there for a few days if we stopped. We agreed to carry on and keep re-assessing. It was a fairly fraught and pretty scary hour or so.

Once we crossed the Erskine Bridge we stopped for fuel, checked the tyres, got some more water and checked the travel advice on various websites and decided to carry on. It turned out that the road alongside Loch Lomond was pretty much clear, although it was snowing quite heavily as we were driving which meant we could not have full headlights on as it was like being in a trippy snowglobe with all the snow rushing towards us. The snow gates through Glen Coe were also open and the outside temperature went down to minus 7 and we struggled to keep the inside of the car warm despite the heater being on full. Dawn broke as we drove through the mountains with frozen lochs and waterfalls on either side of us. 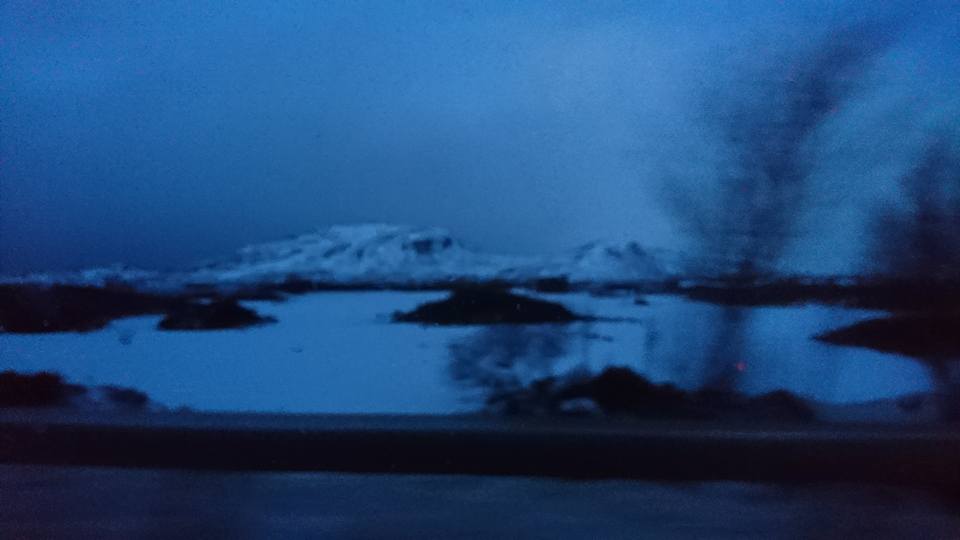 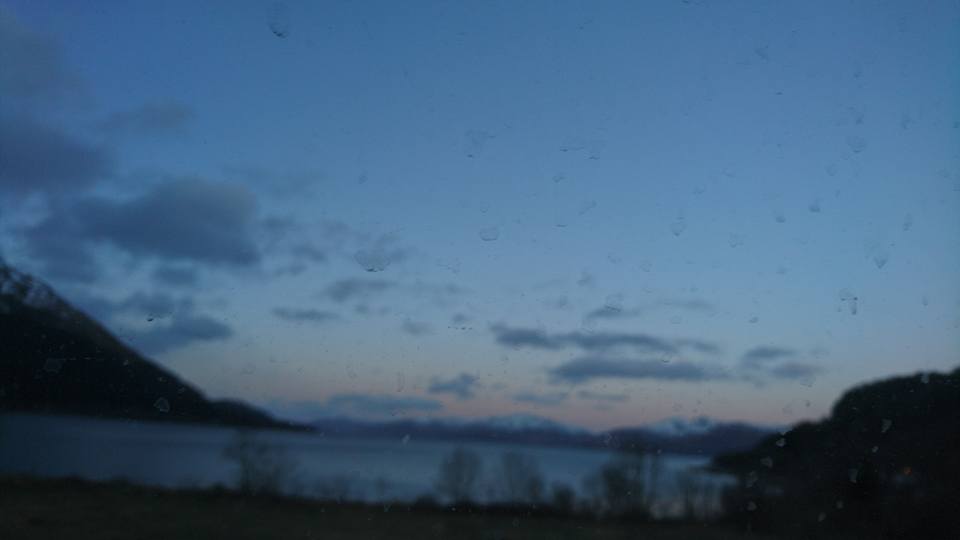 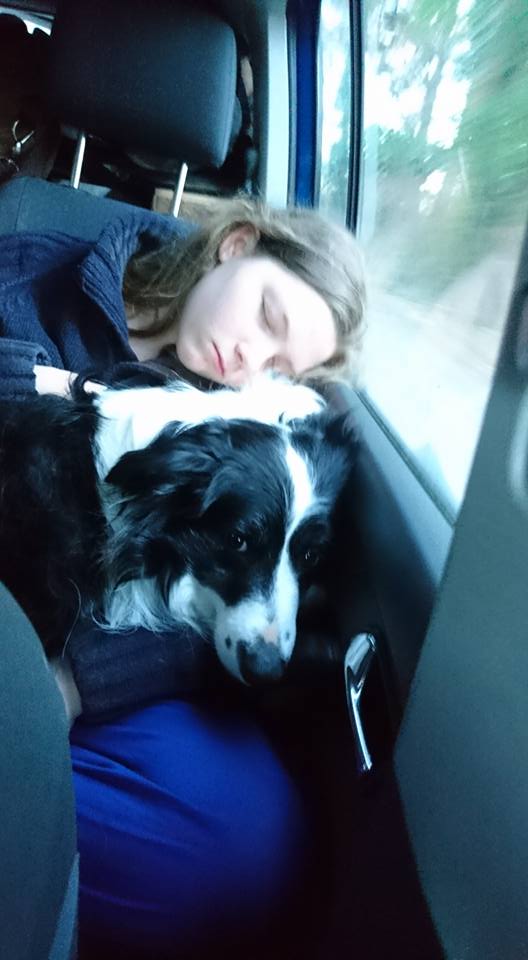 We finally arrived in Fort William just after 8am. Ady and I went into McDonalds for tea, coffee and breakfast leaving the snoozing teens and animals in our previously blue, currently almost white from the snow and grit off the roads car. 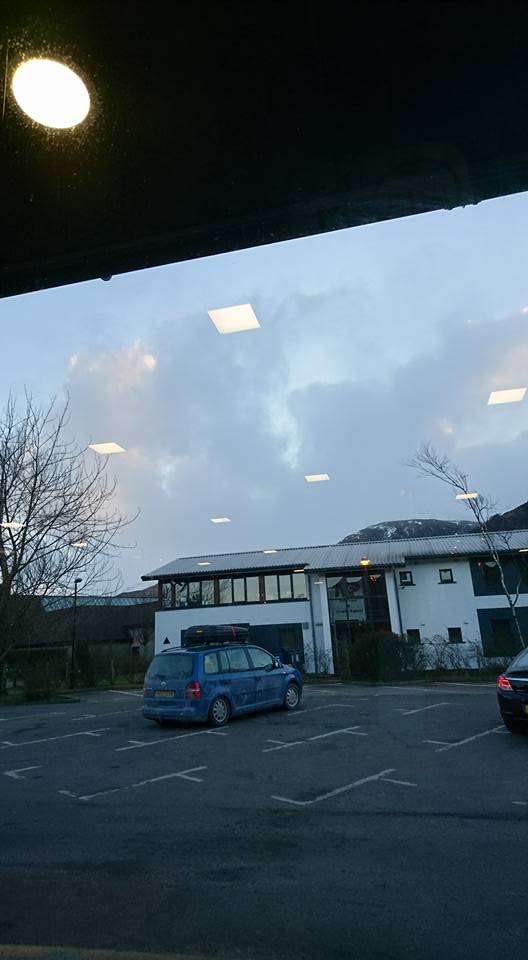 We did then indeed park up and have a bit of a snooze in the car before checking into our travelodge at midday. Some of us slept some more, some had a shower, some just enjoyed being able to stretch out after all those hours in the car. We had a final (very early for us) meal and got an early night. 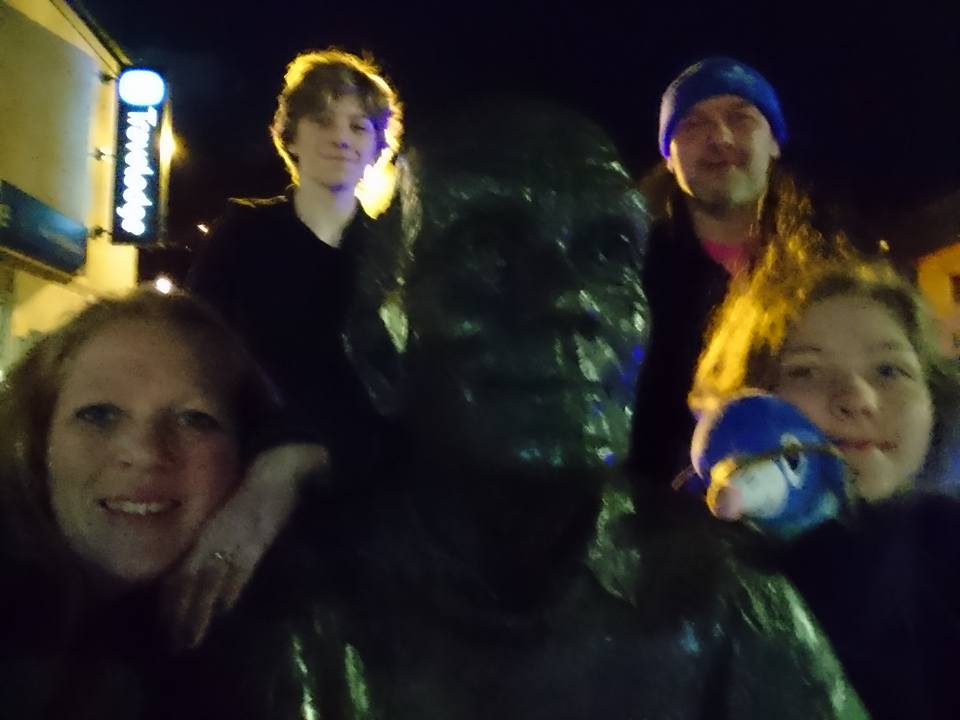 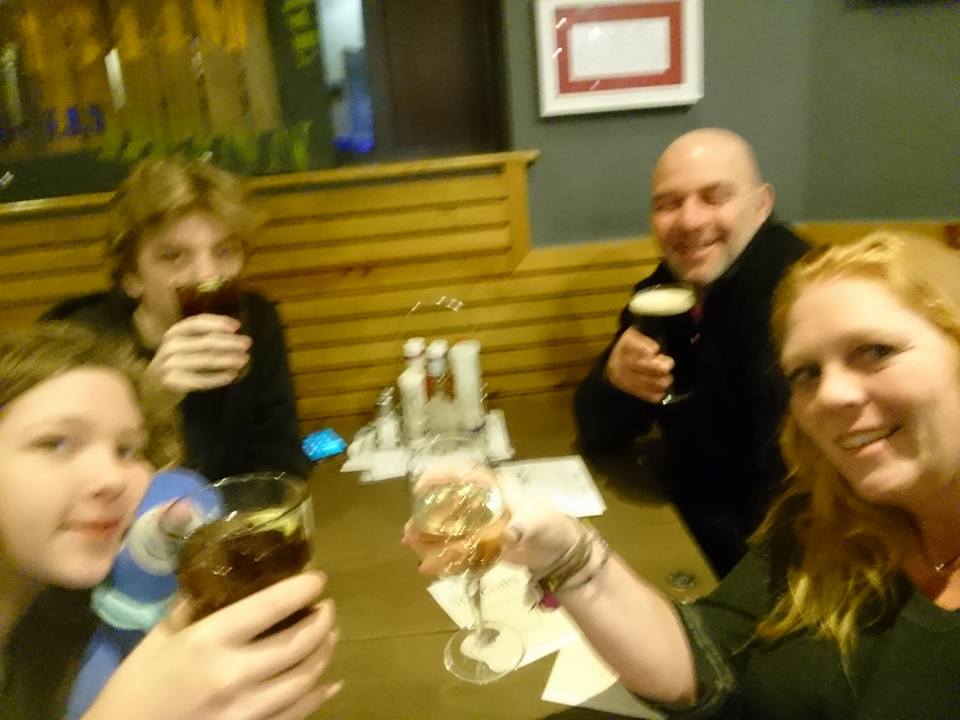 The following day was the final bit of the trek. Ady and Davies took the car with the cat and dog and a final supermarket shop of fresh food to bring back with us. Scarlett and I caught the train. We met at the ferry point and 90 minutes later the ferry pulled in to Rum.

The sun was shining. Ady drove the car off and parked it up – it’s done us proud. Friends greeted us and so the latest bout of wandering came to a close.