Chicks hatch on Croft 3. Our second celebration of new life in as many weeks. The broody hen has been tenacious in her efforts, bloody minded in her will to succeed and determined to make this happen despite what gets chucked at her in the way of weather. She reminds me of someone….

Ady found a dead chick beside her this morning when he went to feed the animals. Chickens will do a very brutal cull themselves on chicks they think won’t make it. Infact the broody hen often casts out eggs mid incubation which when we have cracked open we have found to have part formed chicks inside. We have always assumed the broody hen has some sort of spooky sixth sense about whether the chick is healthy and makes a decision. We have known several at-hatch culls at the hands (beaks?!) of the mother hen in the past too and they seem to know what they are doing no matter how brutal it seems to us. As Star said matter of factly earlier ‘she needs all her time and energy to dedicate to the healthy chicks that will make it, she can’t be worrying about the ones that won’t survive without loads of help’. So evil Tory hen or natural at it’s most efficient finest – you decide… In the past we have removed an ailing and picked on chick and raised it ourselves which if we’d been around this morning to witness the hatching and events afterwards we may well have done but we weren’t and while livestock losses always hit us hard emotionally with a lesser financial impact we are philosophical about the reality of this way of life.

Anyway, when I returned home after lunch and checked on the animals I was delighted to see two fluffy, healthy chicks in the coop. 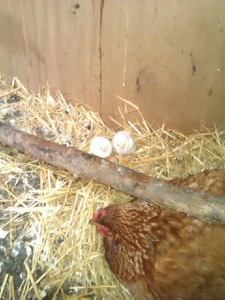 I had official confirmation that my job at the school will end at the end of term. I have not enjoyed it and am very relieved to have got an end date; it has felt like a compromise too far for the balance between being here for Dragon and Star and making things happen on the croft. It has also demonstrated to me anew just why the school environment is not one I am happy, comfortable or at ease with. While many would consider a tiny school like we have here on Rum to be the best possible school experience but for me a school is a school is a school. The structured environment, focus on extrinsic reward systems and early indoctrination into the system is all so against everything I believe in. I also think that a school as small as two pupils is actually the worst of all worlds. Anyway, good news all round that I have only weeks left and will then be able to re-focus on the reasons we gave up so much to come here and live our dreams.
I spent the afternoon at the static, having watered the plants in the polytunnel and checked on the animals on the way home. I made bread, made tortilla flour wraps to go with dinner and then spent the afternoon crafting with the kids. We did some needle felting – I made some colourful midges using material scraps and beads – Dragon made a chicken badge and Star a little representation of me 🙂 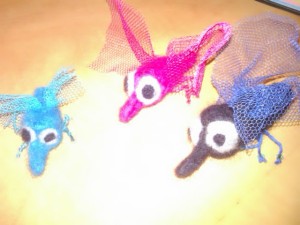 Dragon also did some fab sketches – one of a red deer stag infront of Hallival, another of the view from where he was sitting looking out through the window. Both children are really coming on in leaps and bounds with their art, developing their own unique styles and creating pieces of art they are justly proud of. I guess with inspirational landscapes and material like they have constant access to it makes it easy!