We’ve been spending a lot of time on the ‘plot’ these last few weeks. The fruit cage requires plenty of trimming between the soft fruit bushes and orchard trees to stop the grass growing too high and choking things. The fruit cage is a real investment in the future rather than something we anticipate reaping quick results from. I saw a Chinese proverb recently which really resonated with me:
“The best time to plant a tree was 20 years ago. The second best time is today” A long term aim in the fruit cage would be to put down some kind of mulch to stop the grass and weeds from growing up, maybe some seaweed around the base of the tress and bushes…

The polytunnel is now complete, with shelves on both sides and loads of things happening in there. I have been sowing lots of seeds and some have already germinated and are ready to plant out. thin or transplant. The aim in there will be containers of things like tomatoes, chillies, peppers, courgettes, cucumbers which will stay in there. Starting off seedlings of hardier veg and salad to plant out in the walled garden or herbs to restock the herb spiral and maybe some winter greens sown in autumn. Once the strawberries in the old polytunnel site are spent we will move them across to a raised bed against the outside south facing wall of the polytunnel which we will build a cold frame over. I’ve also started off some strawberries from seed in there so that whole raised bed should be producing loads of fruit for next year. My ambition with strawberries is to grow enough that we actually have more than we can eat fresh and I can make some strawberry jam, which is everyone’s favourite but the fresh fruit never stays around long enough to get made into jam! We have water down there and it’s a lovely space to spend time in. All that is left to complete is a net or mesh panel to go across the door to stop the chickens getting in if we leave the door off in the hot weather. 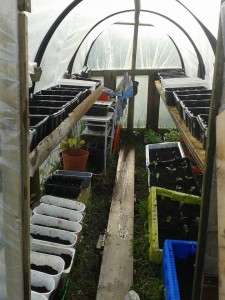 I have also spent hours in the walled garden. I have 15 full size raised beds and 3 double length beds in there and have never previously even had them all weeded and full of compost let alone all growing things but am on track to manage just that this year despite the late start. I have carrots, parsnips, leeks, salad, cabbages, purple sprouting broccoli, rhubarb, chard, celeraix and peas in already. I have asparagus, artichoke, beetroot, wild garlic ready to plant out soon. I have two large and two small beds still to weed over and net against the chickens and then the whole area will be working for us. 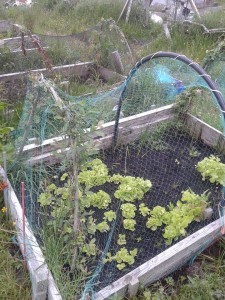 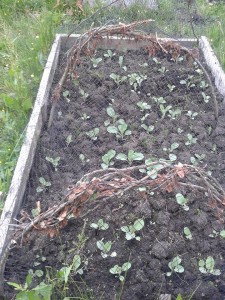 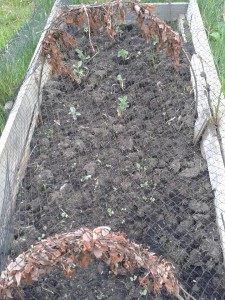 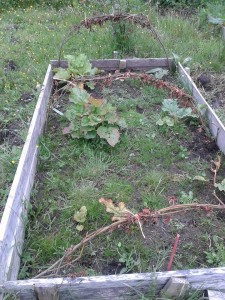 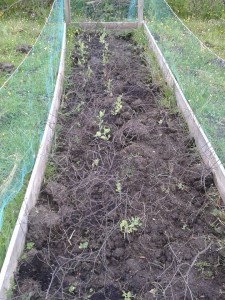 I have spent many happy hours in the walled garden weeding and am only there a matter of minutes before I am joined by an army of helpers – sometimes as many as 8 chickens will wander over and dig away at the worms and bugs as I dig them up. 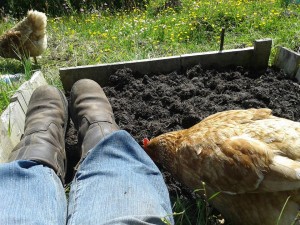 As always the whole area is made with cast off, recycled and reused materials. With the exception of the netting and a few nails and screws our entire polytunnel, fruit cage and walled garden is constructed by items found, gathered, gifted or scavenged from the island. Our latest such find was a heap of old emergency lighting boxes thrown in the skip as they no longer meet current regulations. There are no such regulations on mini propagators though, and filled with a bit of compost these will act as micro greenhouses to give seedlings a head start. 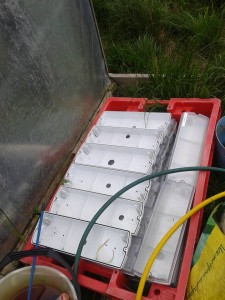 No more the Wondering Wanderers, more like the Wombles – making good use of the things that everyday folk leave behind!