This year we have let the piglets reach the largest ever before, they were an early litter and despite the poor summer they have all grown well and thrived. We have also left it later than last year to kill them so have had the largest weights so far.

We still have one pig left to kill. If we have a good day of weather on Friday we may do that then, if not it will be next week. That will leave us with Tom and Barbara and the wee runty piglet who has won hearts all over Rum and gets to stay. She is really friendly, eats little, so far has shown no sign of being in danger of being mated by Tom and although she regularly skips out of the pig pen does not seem to do much damage to the croft in terms of rooting up the ground in places we don’t want her to.

Yesterday was Pig Day the Ninth and as it was very cold we did a simple cut in half, took off the front and back legs (one back leg is in brine to make a ham, the others are large roasting joints, one of which we gave to a friend in exchange for help on the croft), another couple of roasting joints of rib roasts, and a belly to roll, ribs for sticky barbecue ribs and all of the rest for mince this time. We have the processing down to a fine art now and could manage all of that in about two hours. Ady brought in the heart and liver to cook up for Bonnie and the kids had an impromptu biology lesson. They have both seen all the organs and internal stuff before, but I am always still fascinated by the insides of an animal. 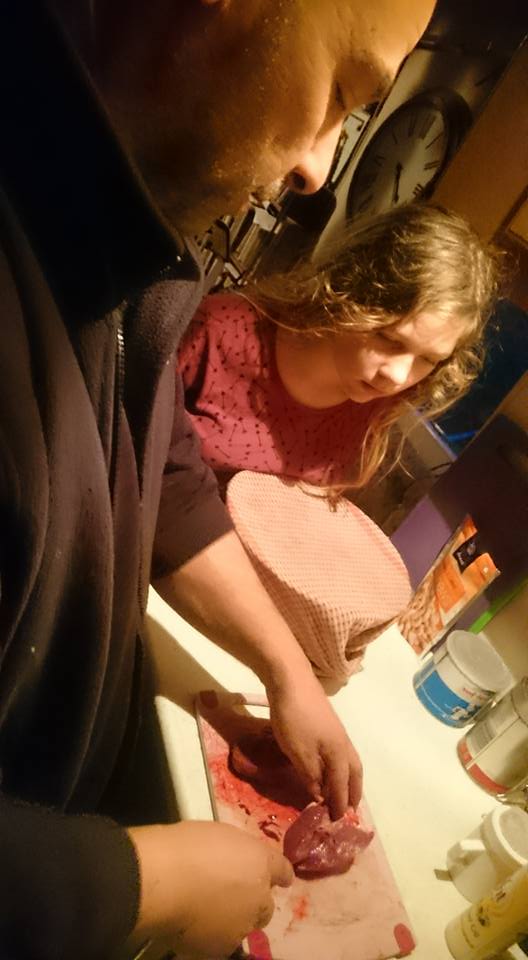 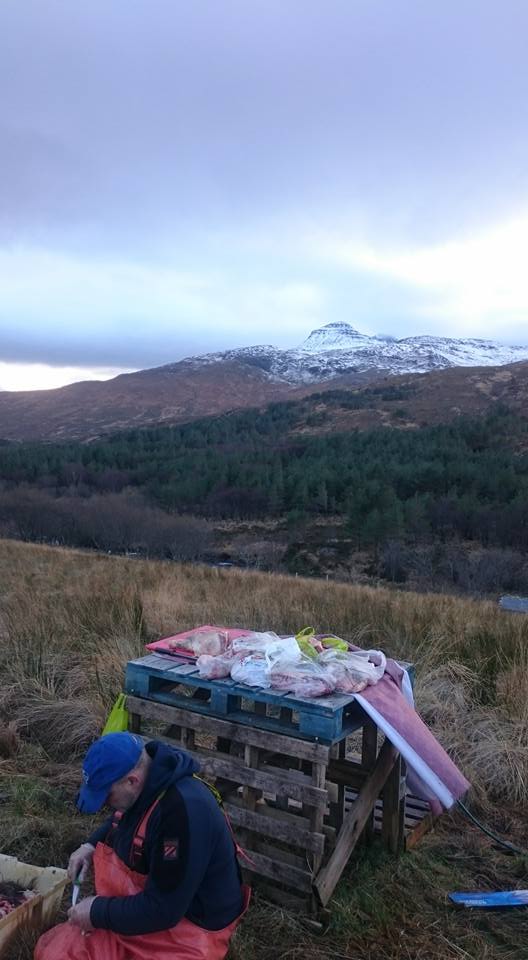 Today was mince and sausage making day. We hire the village hall as we have not got the power or space to manage processing like that up here on the croft and we used the community mincer and sausage maker. I did buy a hand crank mincer but it was simply not up to the job. We may well consider investing in a mincer, sausage maker and slicer for next year but the expense, the power requirements and quite where to store them when not in use would all prove problematic for us up here. We had taken the frozen meat from the previous three pigs out to defrost yesterday afternoon but it was still very cold and fairly solid which is good for sausage making as you want everything as chilled as possible.

First we minced it all – there was kilos and kilos of it! 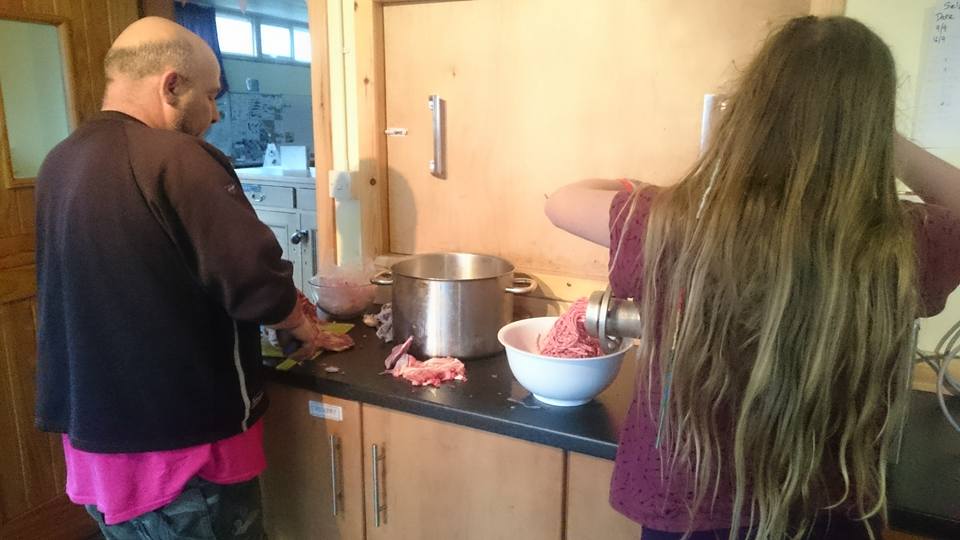 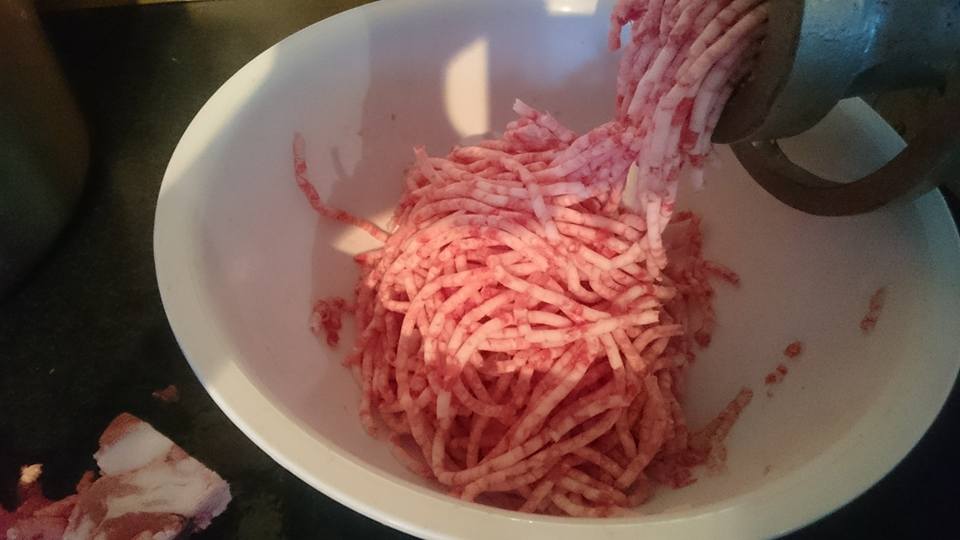 Then we added sausage mix, I buy it in although next year I would like to make the whole thing from scratch and experiment more with flavours. 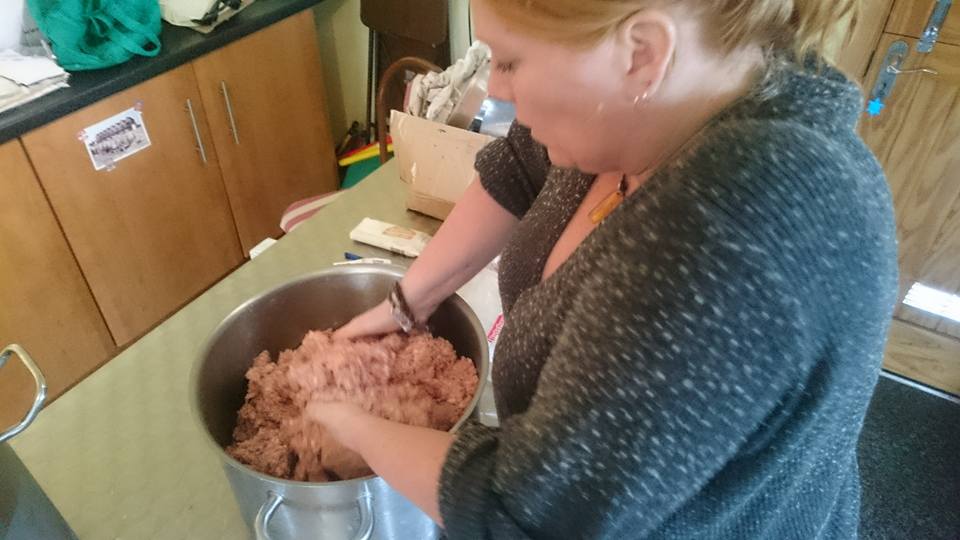 Then the sausage stuffing. I had bought three packs of sausage skins anticipating that being more than enough. Infact it didn’t even suffice for half of the sausage meat we had, so I needed about 8 packs. One of those times when you really feel the remoteness of our lives and you can’t just ‘nip’ somewhere to pick up some more. The next ferry is tomorrow but the next chance of getting sausage skins sent here would probably be Monday at the earliest, too late to work with mix ready today and not able to be refrozen and nowhere large enough for us to keep it chilled. Ah well.

There is a real art to this, it requires the sausage handle turning to be done at a slow but very steady pace to ensure an even fill, while the skin filler works to guide the evenly filled skins into a pile. We work well together but doing this just once a year means you just about get the hang of it as you are finishing for another year! 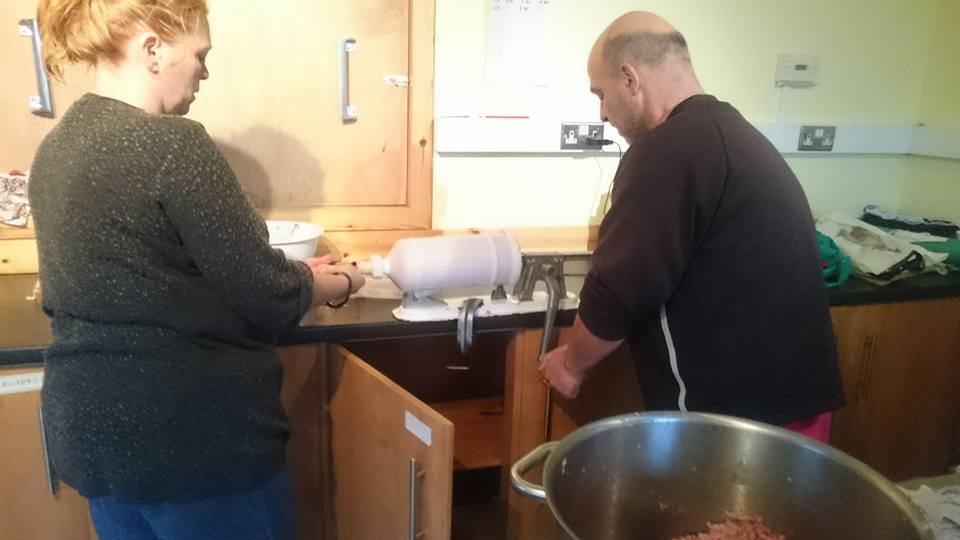 Next the Generation Game fun begins with the linking. As above it is a knack which I just about remember from year to year but could probably be quite good at if I did regularly. I’d over stuffed these, worried about the lack of skins so they are far too full really. 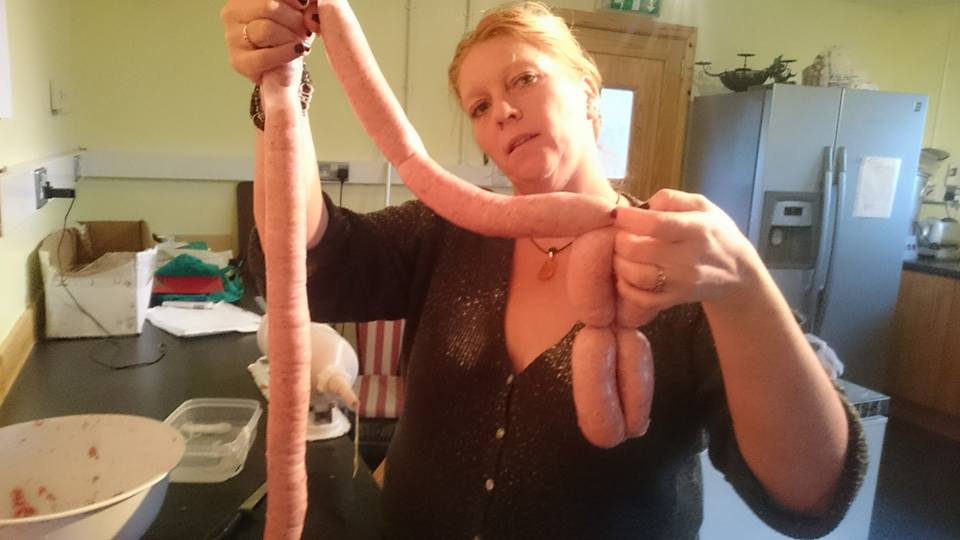 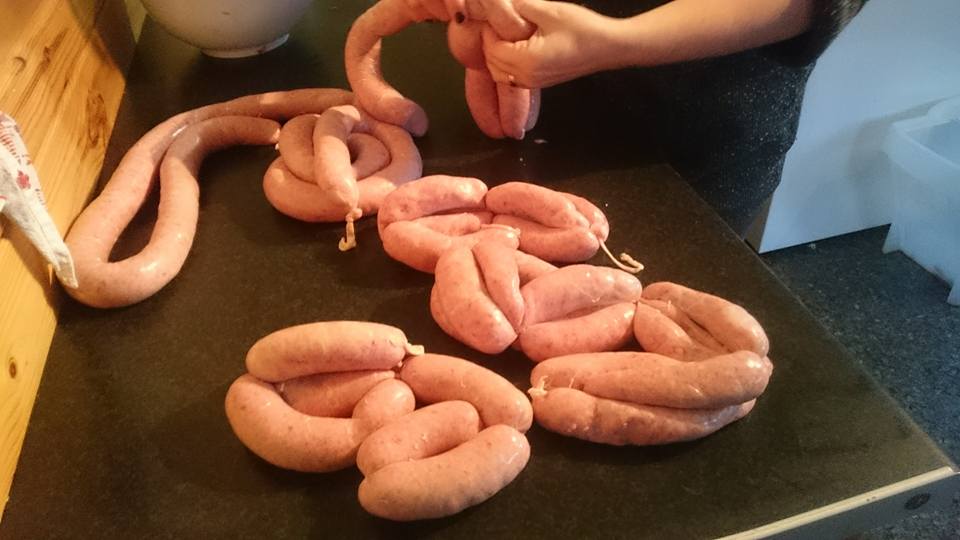 We ended up with 12 packs of sausages (I was working on 800g ish packs to feed the four of us, two or three sausages each depending on fatness of sausage!). We’d also bagged up 5 lots of plain mince suitable for bolognaise etc. Then the large quantity of leftover sausage meat with no skins. Scarlett and I bagged them into 800g packs too which can be used for stuffing or as we had tonight for sausagemeat patties or skinless sausages. There were 16 of them. Many, many dinners! 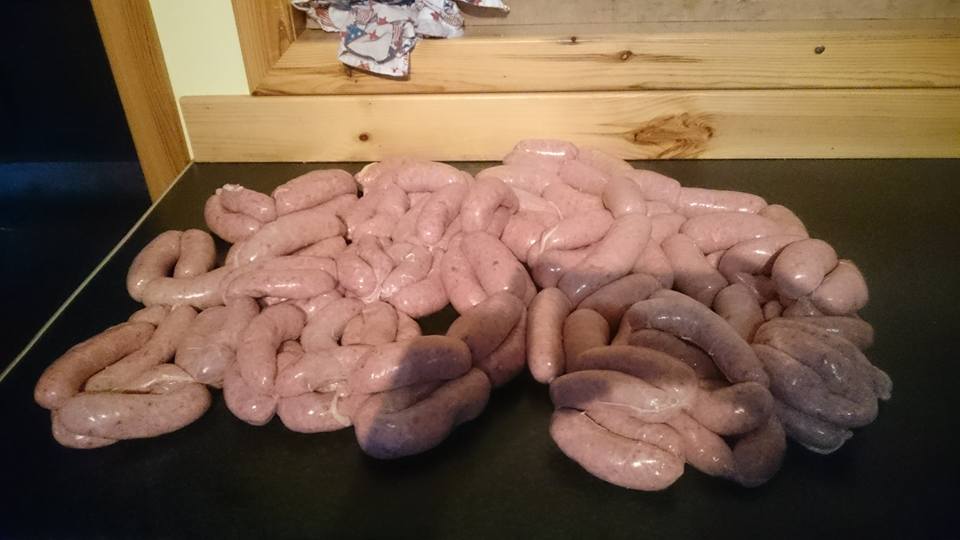 Next year I’d like to do more adventurous stuff with the pig meat. This year I have made some excellent bacon and some lovely hams, experimenting with wet and dry cures and air drying. I’d like to try some of the more unusual cuts along with charcuterie, smoking and doing something with the offal.