We’ve been blessed with some unseasonably warm weather this week, I think much of the UK has been the same. It’s odd being pretty much out of contact with the rest of the world. We listen to the radio every day so hear the news headlines and keep up to date with friends online but we are really out of the loop. This year we won’t be able to nod to each other and say ‘Now it’s Christmas!’ when we see the Famous Grouse ad for the first time that year, or roll our eyes when advent calendars appear in the shops in August. It’s nice though, I like feeling the turning of the seasons by judging how many layers to wear and gauging how low in the sky the sun is sitting and feeling the first tingling of festive excitement about Christmas because of the smell of bonfire smoke and fireworks in the air and getting dark at 5pm means it is on it’s way.

We’ve gone to the winter ferry timetable this week, it’s getting darker quicker every day and of course the clocks go back this weekend. There is talk on the island of the firework party on the beach, of a Christmas Fayre and of course Hogmanay. Jinty’s shop is changing opening hours for the winter and we’re seeing a whole new set of wildlife as birds migrate and animals enter the next phase of their calendars. The deer rut is coming to a close, our chickens and ducks are coming off lay with the shortening daylight hours and even Bonnie the dog is happy to lay around sleeping of an evening now it’s dark and cold outside. I’m missing a cat curled up on my lap even more now than ever before…(and not just because it’s cold and cats make excellent hot water bottles!).

But while the sun has shone we’ve had a good and productive week. We have got all our winter gas bottle supply up to the static while the river has been running low enough to drive across and the croft has been just about dry enough to drive up the hill. With sensible use we should have enough gas to power our boiler for hot water, our cooker and our gas fire until the spring. We also have a portable gas fire with a full gas bottle too. We have done an inventory on animal feed and our own tinned food store in the horse box and made lists of what we have. We are hoping to get a chest freezer sometime in the next couple of weeks which will mean we are able to stash meat, fish and dairy produce when it is on special offer at the CoOp and we can batch cook when the oven is on to get some dinners in the oven. Cooking in the evening creates lots of condensation, particularly when cooking on the hob rather than in the oven so any advance cooking we can do will help ease that.

We have taken to having our first and last cups of tea of the day out on the sporran. It’s lovely watching the sky change colour twice a day as the sun climbs up, staggers across the sky and then drops back down the other side again, like a really big tennis ball in slow motion chucking out rainbows of colour behind it as it goes.

Dragon and Star have spent most of their week outside, training the dog to do various tricks, playing in the river, messing about with the chickens, ducks and geese. They spent some time inside today with the lego and we found a stash of books in the horsebox yesterday that Star and I had only been talking about the day before so we’ve read some of them and have the rest lined up ready to go. We’re all looking forward to cosy afternoons under a blanket reading aloud this winter. They did some more bird ringing assisting on Tuesday with Ranger Mike  and were witness to the ringing of various birds including songthrush, redwing, blackbird, robin, dunnock, great tits and chaffinch. 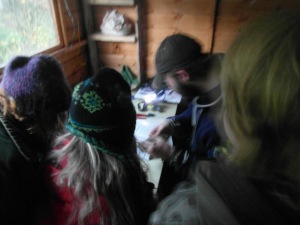 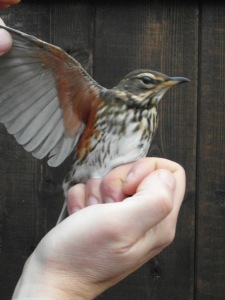 What else have we been up to this week? Soup, we’ve eaten a lot of soup and we made soda bread for the first time yesterday which I really liked but no one else was quite so keen on. And we’ve had lots of bonfires – plenty of burning rubbish to be done, which Dragon and Star are always up for.

We’ve watched lots of films this week too – Labyrinth, Jumanji, Parent Trap, Holes. And we did some youtubing of some music videos that I had been telling the kids about – Sledgehammer – Peter Gabriel, I’m Still Standing – Elton John. Dragon has been learning about playlists on Ady’s old mp3 player and creating various favourite track playlists. Like the teenager in training he is at 12 he often repeats a track 3 or 4 times in a playlist though. Currently he and Star have been listening to Puppy Love, Copacobana and various hits by Queen. Their taste is nothing if not eclectic! All this interspersed with DSing and playing Angry Birds on Ady’s phone, drawing endless pictures and Star’s current favourite activity of counting down the days until her birthday (still well over a month away).

We’ve been doing lots of star gazing too, the sporran is perfect for standing out on and looking upward. It’s been a very bright moon this week which means the contrast is less and the skyline of the cuillins is still very visible even in the middle of the night but we’ve been picking out various planets and constellations and looking out for shooting stars. We listened to a play on the radio this week about what might have happened if the moon landing in 1969 had not been a success which was really interesting and sparked off all sorts of conversations. Dragon, Star and I also had a slightly surreal conversation about what would be the most fun thing to do if we scooped up all the fallen leaves on Rum into one big pile.