Sorry for the silence. It’s been a constant round of catching up with family and friends, doing festive stuff and also putting the first touches to our What Happens Next plans.

I’ll talk about that a bit more once we actually know whether our hopes are to be realised as for now that is out of our hands with other people making the next decision. I’ll update as soon as we know what our next move is to be but for now I’d like to share a newspaper story that appeared about us in the Scotsman, which will also spill the beans about what we’d really love to be our next move.
http://www.scotsman.com/news/environment/woof_family_hope_to_head_for_rum_1_2008815 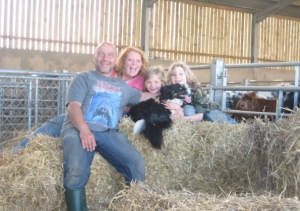 THEY went in search of the Good Life and believe they have found it on a remote Scottish island.
After nine months of travelling the country in a 30-year-old campervan, working on farms and crofts, the  family from Sussex are ready to put down roots and have set their hearts on becoming nearly a tenth of the population of Rum.
Ady, 47, his wife Nic, 38, and children Dragon, 11 and Star, nine, have applied for one of the first crofts created on the island after living an “off grid” lifestyle, travelling across the UK in an activity known as WWOOFing (Willing Workers On Organic Farms), using a network of hosts to facilitate placements on organic farms.
The family recently visited Skye and the community-owned island of Eigg where they learned islanders on Rum were offering new croftland to help increase the population and stimulate the economy.
The Goddards are now among those whose applications will be considered by tomorrow’s closing date with potential crofters due to be interviewed in January or February.
The crofts have also attracted inquiries from Edinburgh and even the Czech Republic, as well as existing islanders, despite being little more than rough ground at present.
Nic, who previously worked in retail management and marketing, said: “I believe everything we have been doing over the last year has been leading up to this.
“It’s down to the people of Rum whether we are successful with our application, but we feel we are right for the island.”
“Over the last ten years we have been moving away from conventional life towards self sufficiency. We had ideas of an idyllic life but we wanted to see for ourselves what it would be like so we could go into it with our eyes open.
“Undoubtedly there is a lot of work to be done building the croft, but there is a certain attraction starting something from scratch.”
She said the family also like the idea of being part of a population that makes its own decisions. While most of Rum is owned by Scottish Natural Heritage, the village of Kinloch is run by the Isle of Rum Community Trust on behalf of the 38-strong population.
She added: “We have learnt so much this year about living off the land. We know what the important things are to consider when looking at land, what crops are worth growing, which animals are worth keeping. We have practical skills such as fencing, building, growing. We have vastly extended our knowledge base on animal keeping, harvesting, tending to livestock and crops.
“We have learnt so much about alternative building methods, green energy, off grid living, low impact lifestyles.”
The two crofts on offer are located to the west of Kinloch and the trust admits they will both require a “significant amount of work” to improve he area beyond rough grazing.
Vikki Trelfer, Rum’s development officer, said the trust has a vision for the island as a vibrant and viable community for people of all ages and a sustainable and diverse economy.
She said new residents with children would help to keep the school open. At present there is only one P7 pupil in the school, one three-year-old in the nursery, and two children under three, while three teenagers go to secondary school in Mallaig.
“New residents will bring different skills and expertise to assist development of the community on Rum. Also, there are a number of opportunities for providing visitor services on the island in the private sector,” she said.
“Rum needs people with skills and drive to take advantage of its huge potential as a major visitor destination.”
The only other croft has already been let to Rum residents.