2018 left as all years do, a mix of the mundane and the remarkable.

Our nasty colds have lingered and given a soundtrack of coughing and blowing noses to the festive season but I think we are all now over the worst of that. The weather has continued to be kind and we’ve had a few amazing starry nights where we’ve stood out in the darkness looking up in wonder.

Most of the festive food has now been eaten, plenty of festive drink remains, as do festive chocolates but we are happy to find room to store those and enjoy them over the coming weeks. We took our decorations down a few days after Christmas. Slightly early according to tradition but in such a small living space with such extreme temperature fluctuations the tree was becoming both a nuisance and starting to look past it’s best anyway. I always like the brief feeling of the caravan being spacious! We were also aware that rather than let the tree get sadder and limper in the caravan once we put it outside on the croft it would be very gratefully enjoyed by the sheep for a few days. Sure enough they were investigating it within minutes of me putting it outside and a few days later it is stripped bare of bark and needles. 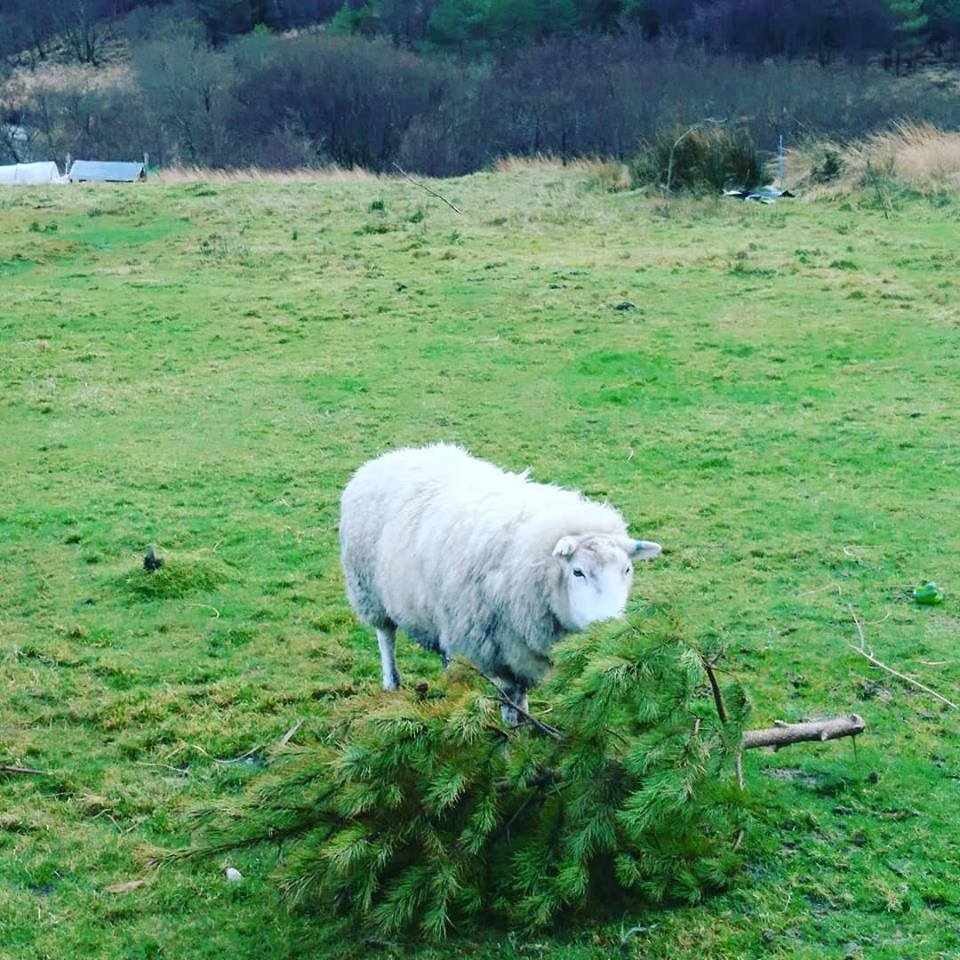 The last day of 2018 was wet though, right through til the evening and Ady seemed to spend a large amount of the day outside doing various things like getting supplies from the village freezer or shop, checking for post deliveries (both Davies and Scarlett were still waiting on one final Christmas gift each, both have now arrived and been very gratefully received). On one such jaunt he left the caravan only to return a few minutes later carrying a buzzard. 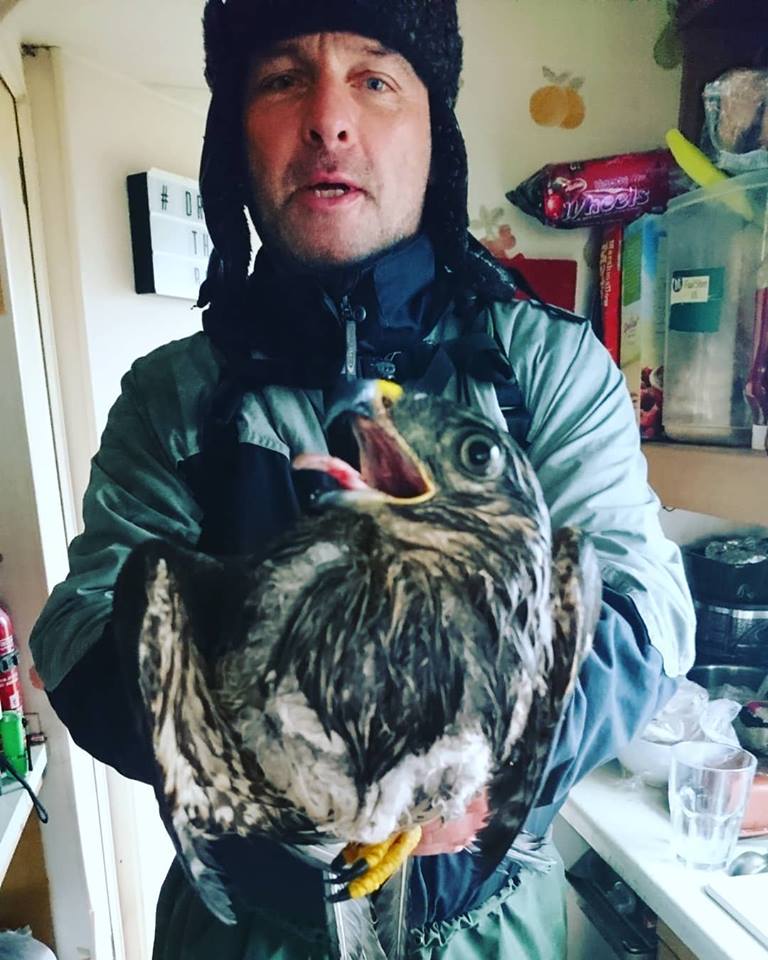 Very sadly it had killed and was eating one of our chickens. It appeared to have been quite the tussle with feathers everywhere and the chicken clearly not going without a fight. The buzzard was quite thin and had gotten waterlogged during the tussle and so when Ady disturbed it eating the chicken it was unable to take flight and he was able to fairly easily grab it. He bought it up to the caravan where Scarlett covered it’s head with a tea towel to calm it down and then he took it to the resident bird expert on island who kept it calm and quiet overnight to dry out, fed it some venison and released it the next morning whereupon it flew off seemingly none the worse the wear for it’s adventures and manhandling. Hopefully not to return too soon to Croft 3, at least not for any more chicken buffets! A slightly sad tale but an exciting one and Ady also plucked and stripped the breast meat from the chicken which I added to the meat I was cooking the following day for our New Years Day dinner.

The actual turning of the year from 2018 to 2019 was spent just the four of us having enjoyed a nice dinner, chatted with friends online and by phone watching the rest of the UK celebrate. 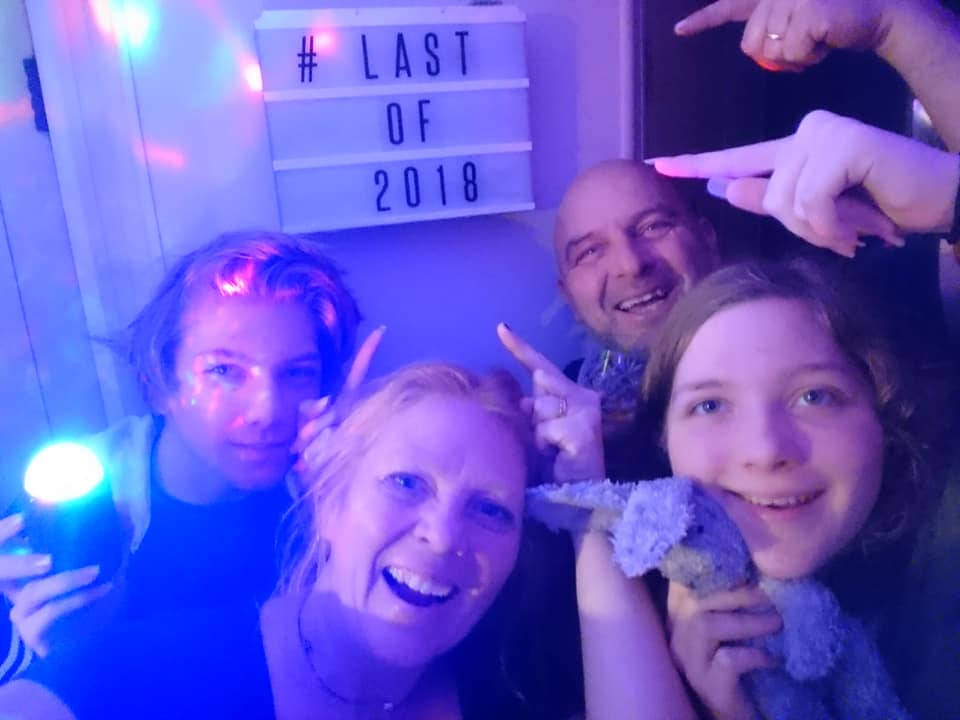 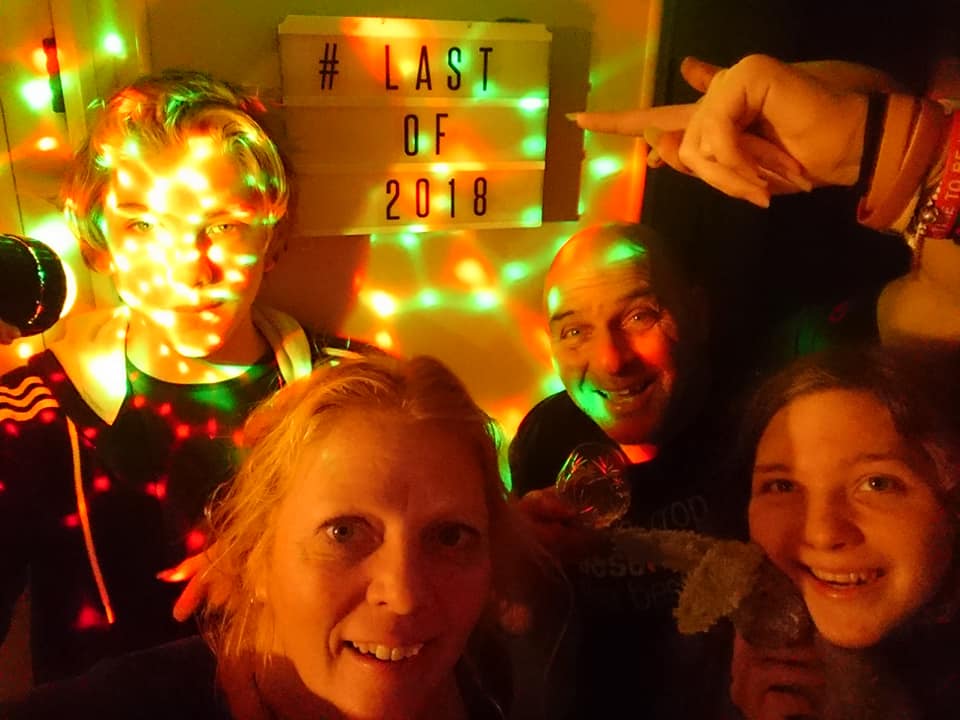 We stepped outside on to the sporran at midnight to toast the new year under the stars. It was very cold so we didn’t linger but lovely to be together seeing in this new year and wondering what it has in store for us. 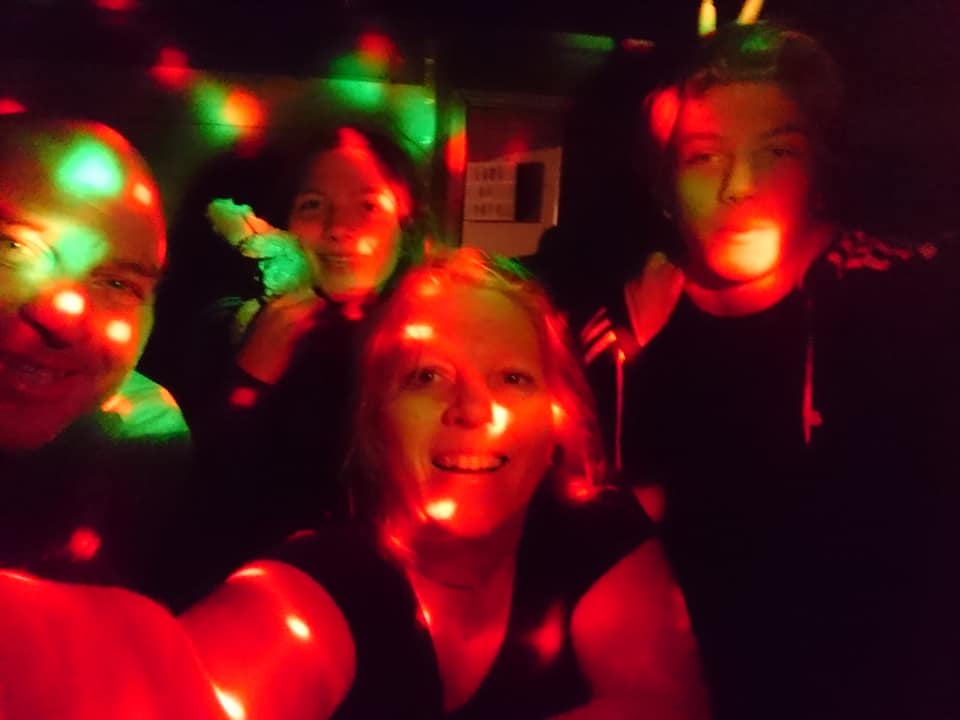 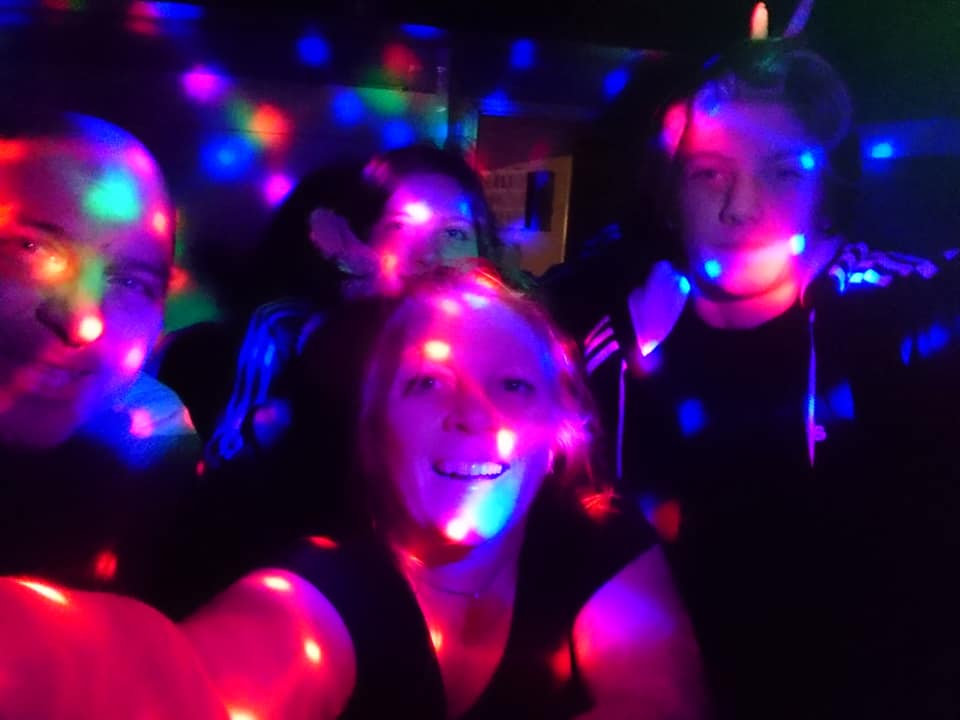 We were all up quite late.

On New Years Day I popped into the village to collect the post from the day before and this years calendar had arrived, very conveniently. I make the new calendar each year in late December using photos from the corresponding month of the year just passed – so in 2019 all the January photos are from January 2018 and so on. It means we are always looking at a large page with photos to remind us what we were doing this time last year and dates to remind us what we have planned for this year. The putting the calendar together each year is a nice activity to remind me of all the things we have done each year and we all look forward to it arriving and then turning over on the first day of a new month to see what we were doing last year.

For some reason – maybe the fact I had finished this year’s quite late at night, having ordered a slightly different one for my parents as a Christmas gift including photos of us with them and so was tired by the time I finished our one I have managed to create a calendar with 2019 on the front but the actual dates for each month being 2018. So all of the days of the week are wrong and events like birthdays, Easter and bank holidays which I fill in with little extra pictures are all wrong too. I was initially upset about this and considered getting in touch with the company I ordered it from. Although it is my mistake to have selected 2018 from the drop down box I do think that when the front cover selected is 2019 and it is almost at the very end of 2018 given how many pop up alerts about the photo quality I got a pop up alert to check I definitely had the right year selected would have been really helpful and prevented the error.

I then decided that actually a few minutes sat with some white paint to mark out all the dates and then rewriting them by hand, along with drawing a little arrow to show the pictures for special dates should be on the next day would still give us a perfectly usable calendar. Plus the rest of the family are so delighted at the teasing me opportunity the mistake has given them the ‘hand corrected’ calendar complete with ‘oops!’ next to where I’ve changed the date from January 2018 to January 2019 is now hanging in pride of place and is making me smile every time I catch sight of it. Imperfect, with a story to tell and visible mistakes that have been put right is definitely the sort of characteristics I admire and celebrate in things and in people! 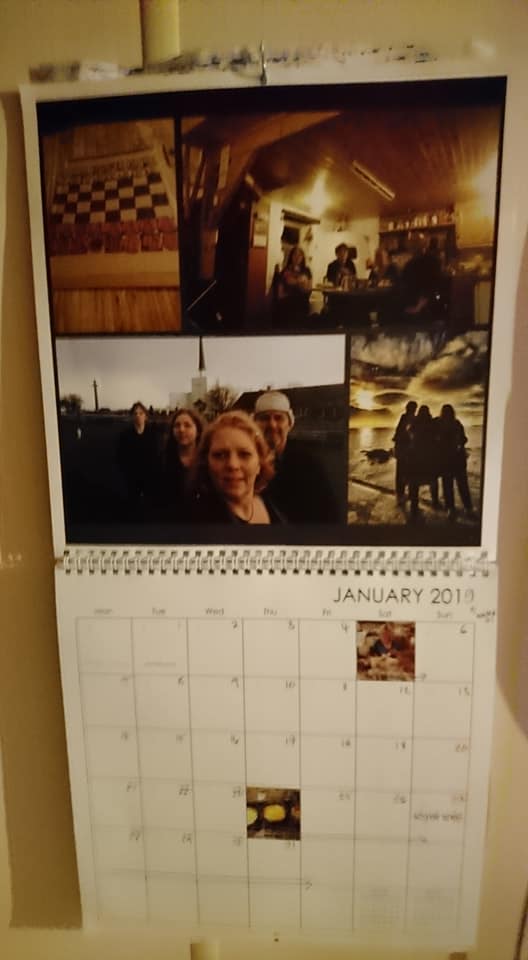 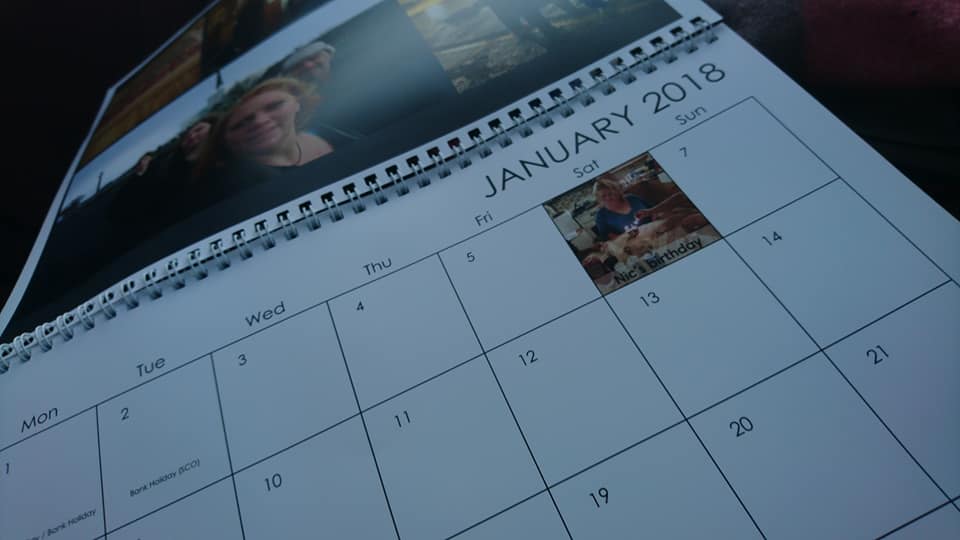 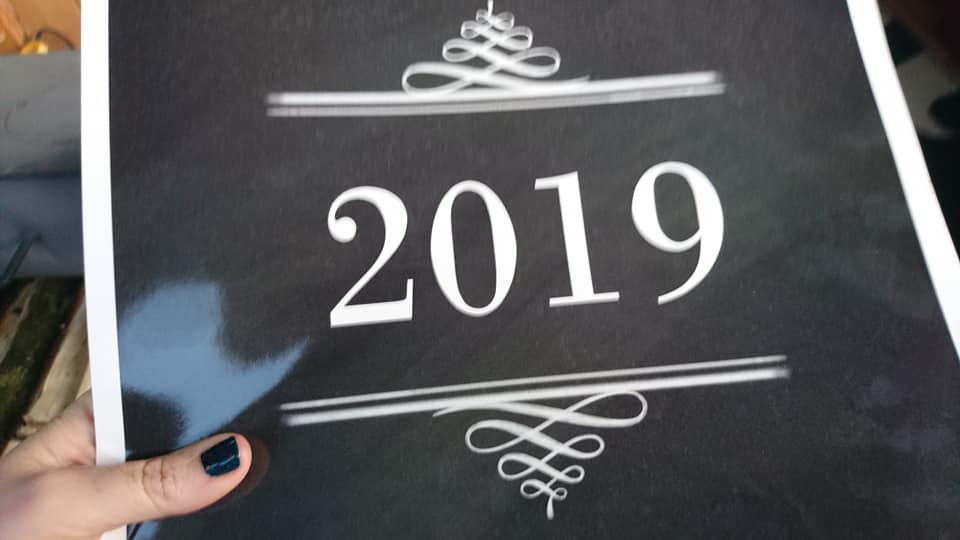