Thursday again already. Ady heard on the radio yesterday that an average human life is 1000 months, give or take.

A thousand months. Blimey. That’s not much is it? Not when the days and weeks whizz by so quick. A month’s notice, a month’s mortgage payment, looking forward to the end of the month….

We have a notice board in the static which I write on, usually on a Sunday afternoon / evening. It’s headed with the title ‘This week on Croft 3’ and we write a list of stuff that is due to happen in the coming week. Some of it is calendar type stuff – visitors, people up for dinner, meetings. Some is job list type stuff – order animal feed, finish the community newsletter, some is aspirational stuff ‘ move the pigs, plan the sowing, get the grant application forms completed’. It more or less always gets done with the odd thing carried over for a week or two. We also have a monthly plan with larger tasks that Ady and I have planned, that is far more fluid and subject to change and depends a lot on money, weather, what else happens to crop up. A thousand months…

While I was at school this morning Ady had a go at the curtains with some mould cleaner. Its changed his life! The curtains which were covered in black spots despite our best efforts through the winter have come up as good as new. We had resigned ourselves to just replacing them all once we move out of the static and it becomes a holiday home to rent but this stuff has cleaned them right up. It has also removed all the ground in dirt that all sorts of fancy hand soap had failed to get off Ady’s hands. We’ll gloss over the fact he and the static all now smell of bleach and there are no doubt all sorts of nasty chemicals floating around!

Ady and the children met me from school and we dashed to the pier where it was our first Sheerwater trip of the season. We didn’t make the first of the year last week as I was at a meeting and the weather was pretty dire so Ady and the kids elected to wait and share the first one with me this week instead, particularly as the cousins are here so it was a real Family Excursion. The boat was super early and actually had to come back for us as it had started to head away. We jumped on and had a lovely two hours off to Soay and back. We saw loads of seabirds – kittiwakes, gannets, great skuas, manx shearwaters, black guillemots, shags. Amazing to think that this time last year we could not have identified any of those and now it is just knowledge we have. Ady saw a porpoise too but the rest of us missed it. 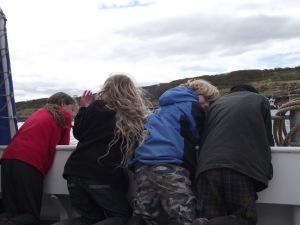 I love this photo of the four older cousins today on the boat. I love how Star is talking, Dragon is grinnning back at us and they are all immersed in their world. It reminded me of the countless photos I have of the four of them over the years in a similar pose looking out from various vehicles.

Here’s one from many years ago of them on a tractor at the pick your own farm we used to live near to and visited countless times every summer. 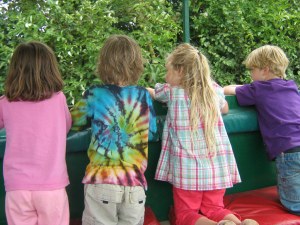 After the boat the kids all scattered to play while Ady and I nipped back to the croft. We got distracted by the piglets all being out in the sunshine playing and exploring 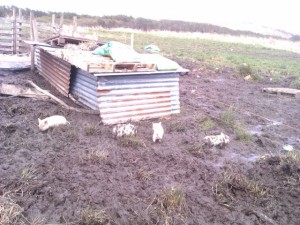 Before settling back down with Barbara for a feed 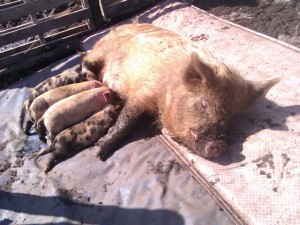 Further good news in the chicken coop – Mrs Chicken now has THREE chicks. All seem well and she was out with them teaching them how to peck this afternoon on the new path. 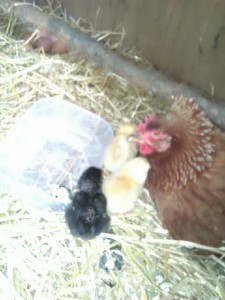 And because I am sharing photos here are two rather gorgeous moths that we saw hatching out yesterday. The kids identified them as hawk moths. 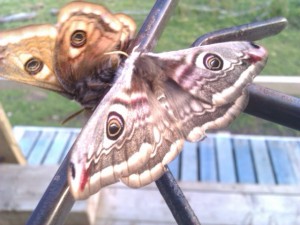 We had a cup of tea with our neighbour Crofter Gav and then I went to the hall for a meeting (SWOT analysis and self evaluation of the bunkhouse project) while Ady rejoined the others to start a barbecue down at the beach to cook dinner on. I joined them a couple of hours later and we had a lovely evening eating venison burgers and chatting while the kids played.

Yesterday’s post brought me some strawberry plant runners which I have put into containers and growbags in the polytunnel and a load of seeds including comfrey, borage, tarrragon and nasturtium. I have some little plants on their way – lavender, rosemary and some other hard to grow from seed stuff along with some gel rooting compound to try and take some cuttings of the lavender plant we brought up with us. My broccoli is sprouting, potatoes have had their final covering of compost and the first tender salad leaf shoots are almost ready to start picking.

1000 months. We’re making sure this one really counts.

One thought on “On and on”