We waved off our extra teen / volunteer / family friend who was with us for a five day adventure. He certainly made the most of his time here with us trying new foods, sleeping under the stars, catching his first fish, seeing wildlife and having long and challenging walks. He was a really easy guest fitting in around our rather chaotic rhythms and lending willing hands to help out with the volunteer event we had happening while he was here. 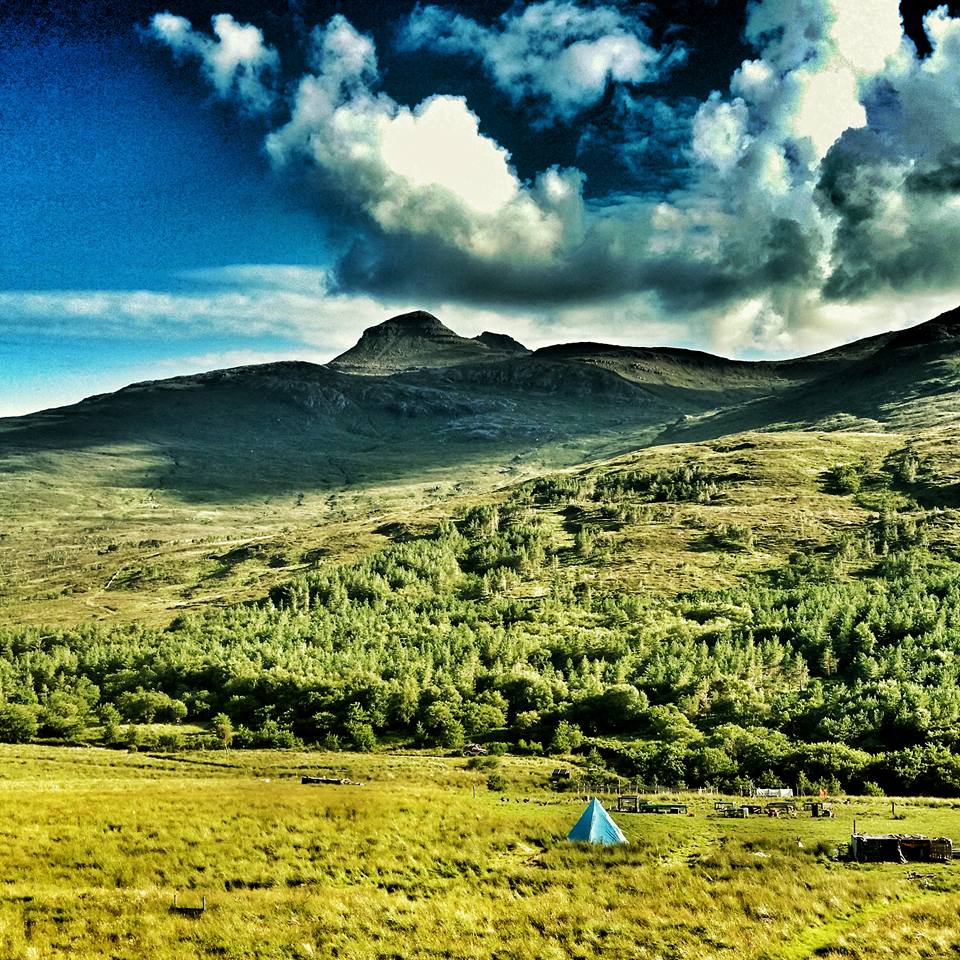 This was his home for his stay with us.

Our volunteers finished their time with us and headed off – one back to France, the others back to Switzerland. It was a pleasure to spend time with all of them, hear their tales of home and other volunteering adventures and learn a little about other people’s lives. For the second time we had volunteers coming to us from a host that we had WWOOFed with five years ago.. so funny to relive our memories of that time and be the hosts ourselves now too. This volunteer event went really well, we had some lovely feedback from the people who came, the weather was not entirely kind but not entirely cruel, they all had a good opportunity to explore Rum and get a real taste of island life and we achieved so much during the 10 days.

Unfortunately during some very unseasonal August gales the bell tent took a battering and has been damaged. It should be repairable, although probably not to the standard required to rent it out. That, coupled with a busy summer and more family and friend visits ahead over the coming weeks means we have decided to not go ahead with our planned September volunteer event. Fortunately all of those coming are able to find volunteering opportunities here on Rum with our community ranger so no one is missing out and we will carry on the wave of productivity from the event we’ve just hosted to get various tasks completed on the croft ourselves.

Strawberries have been on the job list in some capacity for weeks now and finally last week I finished the last of the cloches I have built from dismantled pallet wood and scraps of the torn polytunnel plastic we rescued when the large community polytunnel blew down. I reckon next season we will have about 10 times the amount of space given to strawberries as we did this year so we have everything crossed for a good harvest. I’ve thinned the rampantly spreading strawberries, replanted them in the new locations and planted out some small strawberry plants we’d bought in. 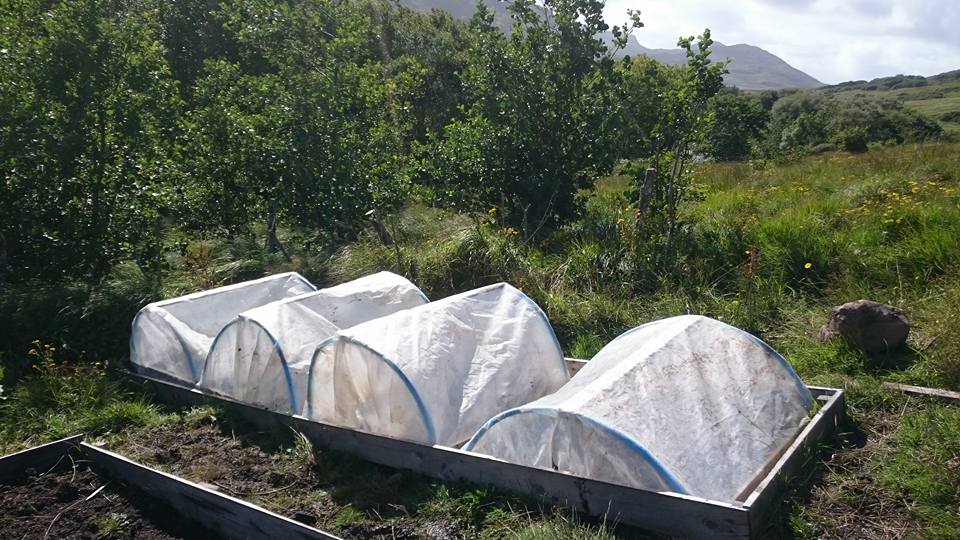 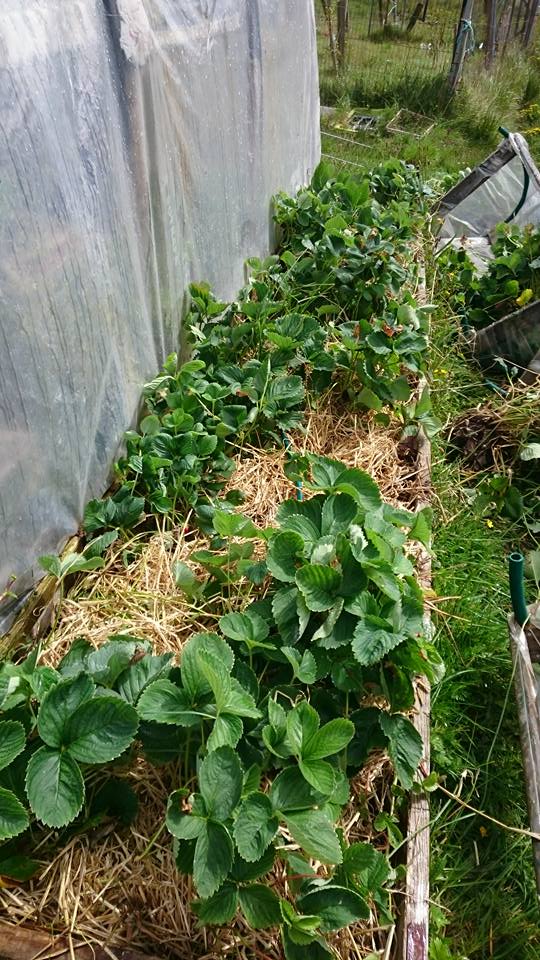 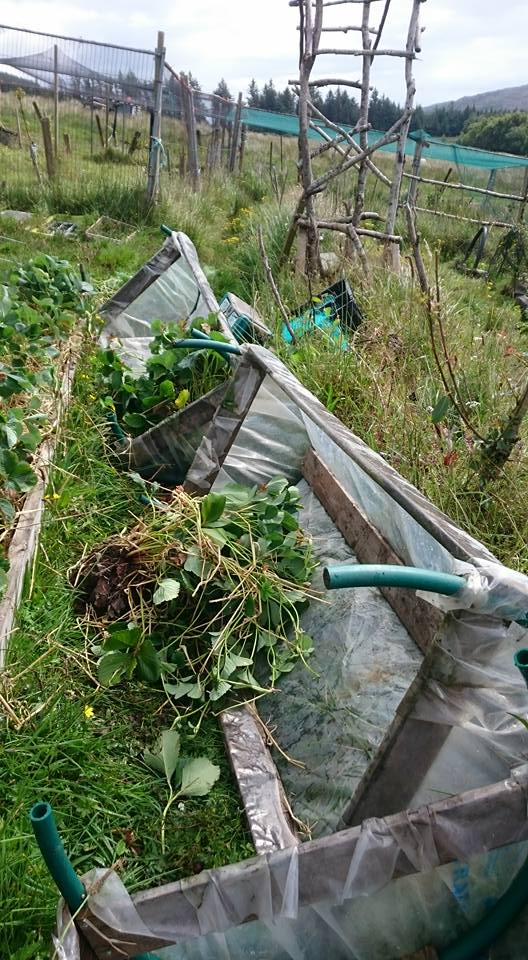 Our ring and release programme with this years hatchlings once they have grown big enough has pretty much come to an end with a load more birds released this weekend. We now just have one mother muscovy duck and her three ducklings plus one of our original ducks and her eight ducklings still penned, they should all be ready for release by the end of the week. We now have 52 ducks in total of different varieties! It was lovely today to come back to the croft and spot Crispy Duck (who was hatched here from our very first bought in ducks and hatched her third clutch of ducklings this summer) with her six ducklings from this year all sitting in the sunshine beside the river having had a swim. 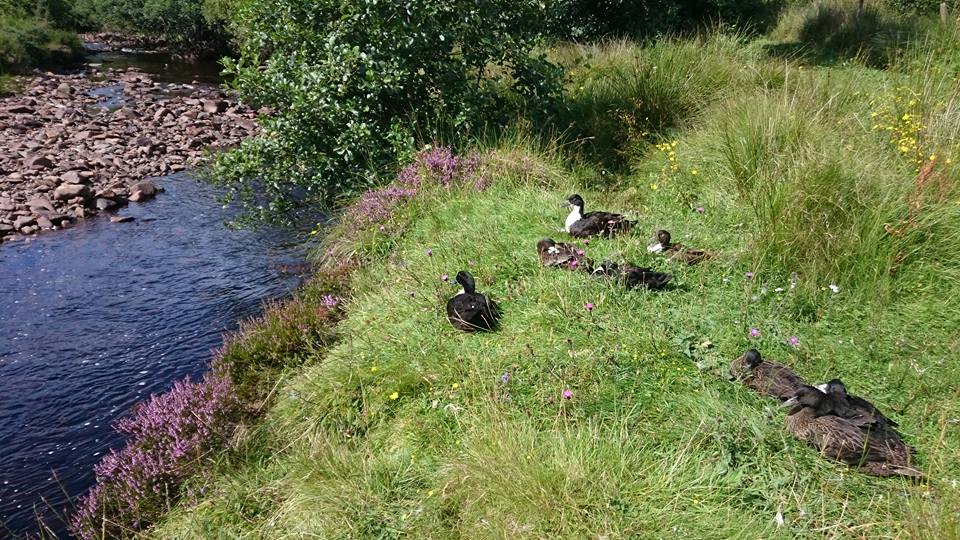 We are delighted to be stocking Barefoot Diaries in the shed now, the gorgeous journal that I write articles for each season. We have one of each of issues 2 – 7 (issue number one has already sold out!) and they look beautiful and really fit in well in the shop. 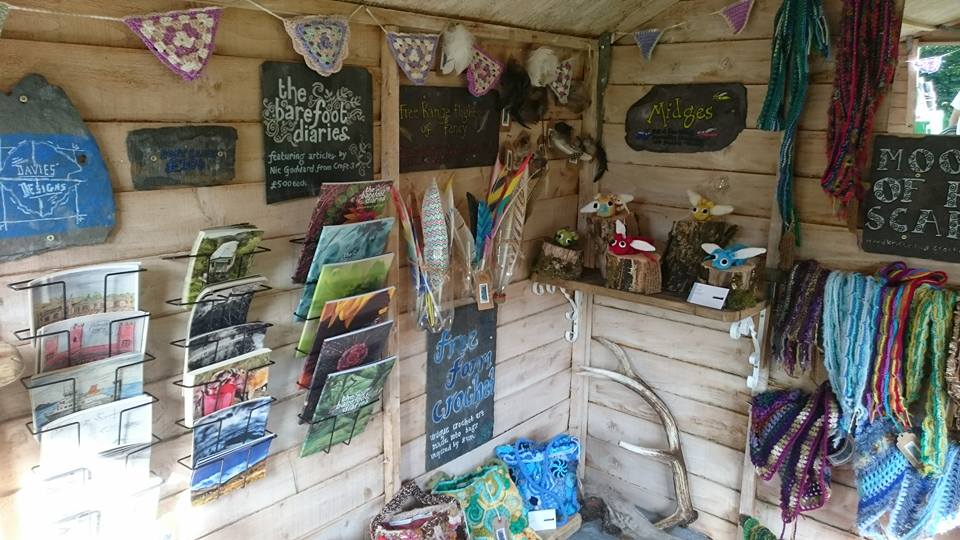 Scarlett and I had a 45 hour dash off the island for a dentist trip and she is now sporting full train track braces in blue and green – she asked for a rainbow of colours but was only allowed two! It was nice to catch up with friends who kindly had us to stay as there was no accommodation to be found in Fort William – which gets a little like Bethlehem at this time of year! We were able to repay some of their hospitality with some chicken and duck whispering as they have just begun keeping a tiny mixed flock of both. The boat trip home to Rum was a challenging one for all 18 passenger on board – I think half were seasick while the other half tended them, passed around bags, mopped up and rubbed backs. It was one of those grim experiences where everyone bonds with each other and comes out the other side feeling they have really shared something. Scarlett was a vomitter, I was a mopper, passer and rubber! One of those rare occasions when I actually feel almost like an adult! It was very, very nice to be home, back on dry land and also to be two of only four people aboard who were not having to get back on a couple of hours later to return to the mainland. We did joke that perhaps everyone should just move to Rum instead and boost our population numbers!

We’ve had a lovely visit from Sussex friends, who fitted us in to their own longer Scottish adventure and had a fine weekend with us experiencing rain, mud, midges and sunshine, sampled our pork, caught their own fish and cooked it for dinner and generally just enjoyed every minute. It was so nice to see them and catch up and remember what we do and don’t miss about our old lives. 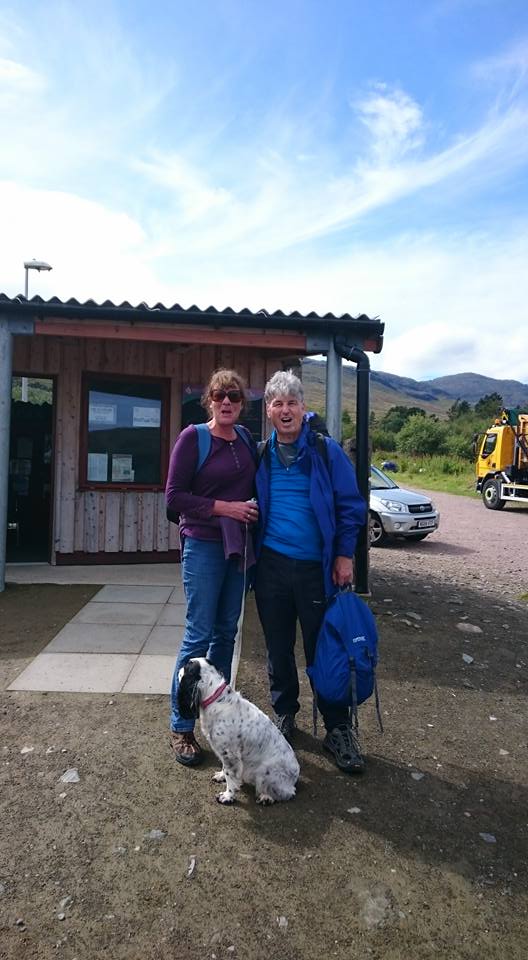 The fishing was part of a bigger community fishing event on Sunday afternoon which was loads of fun and may well become a regular thing. We had recently invested in two new rods so this was their first outing and they proved very good! We caught plenty of fish including mackerel, trout, pollock. We enjoyed it so much that when we waved our friends off on the boat this afternoon the four of us had another hour or so, caught another 15 mackerel and feasted on them for dinner again this evening. Hurrah for fish! 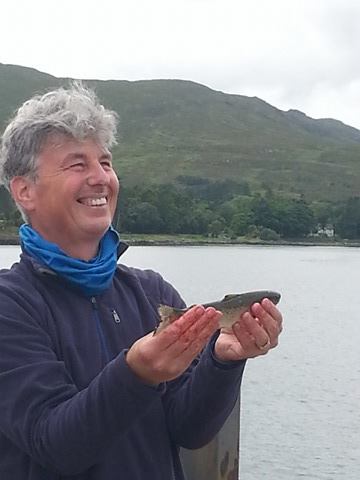 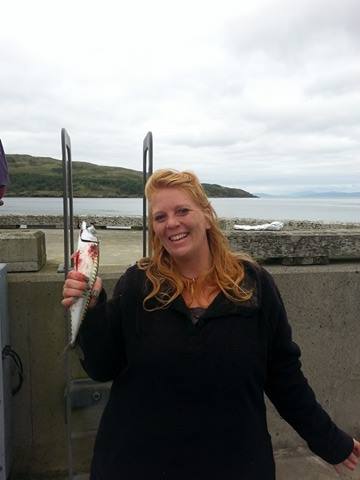 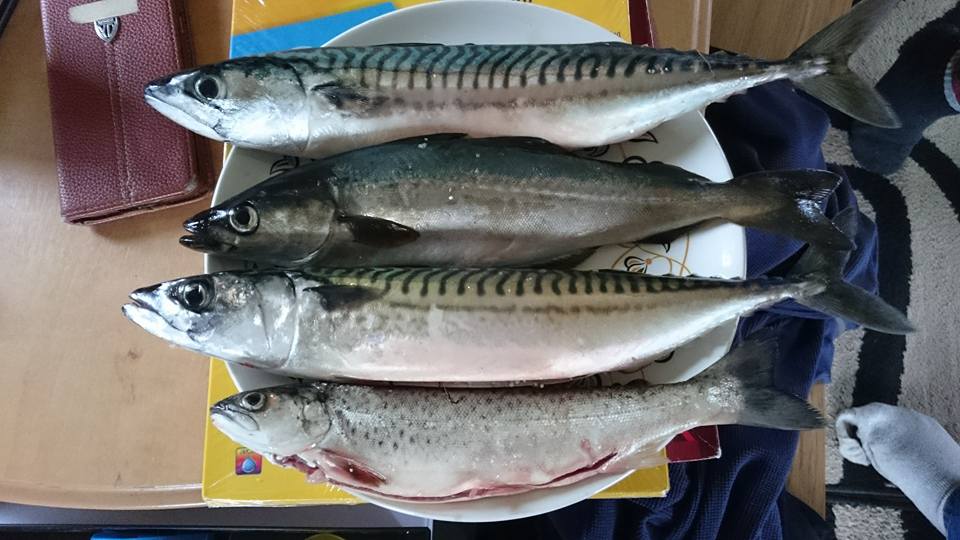 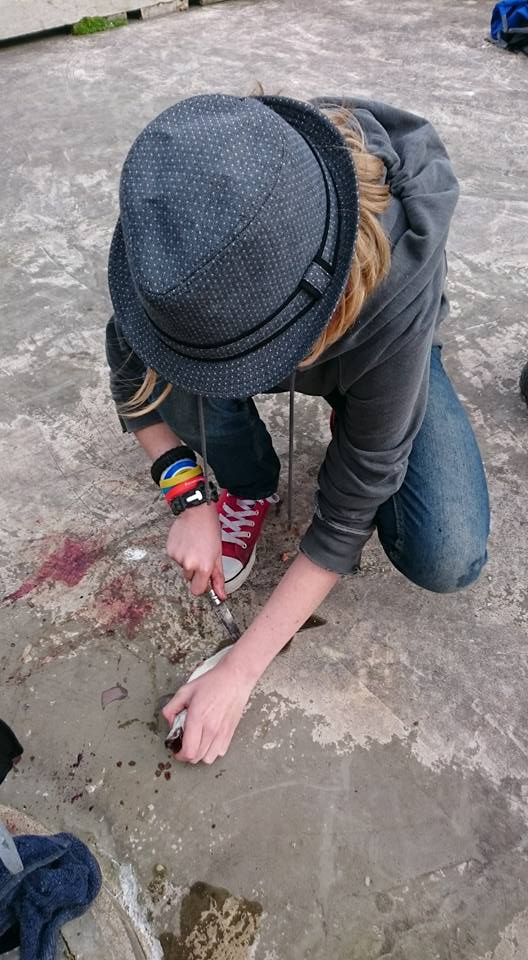 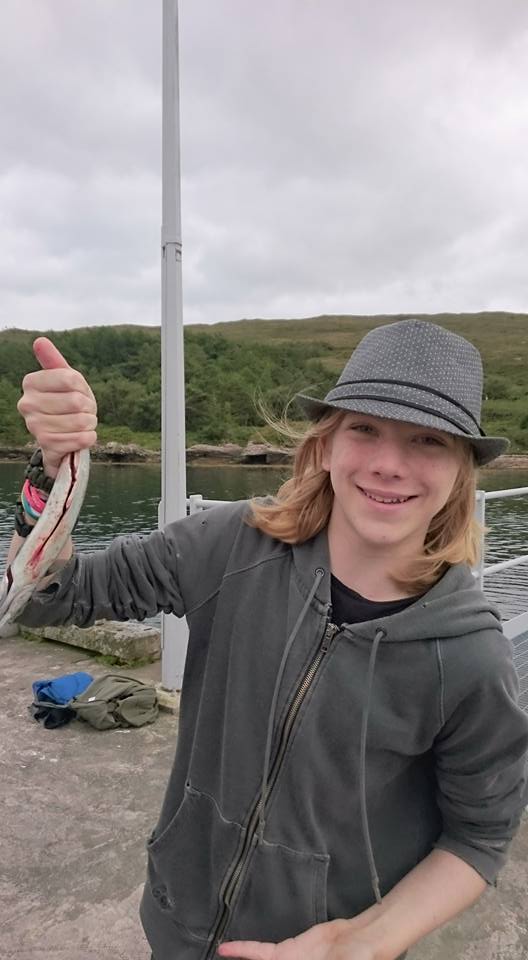 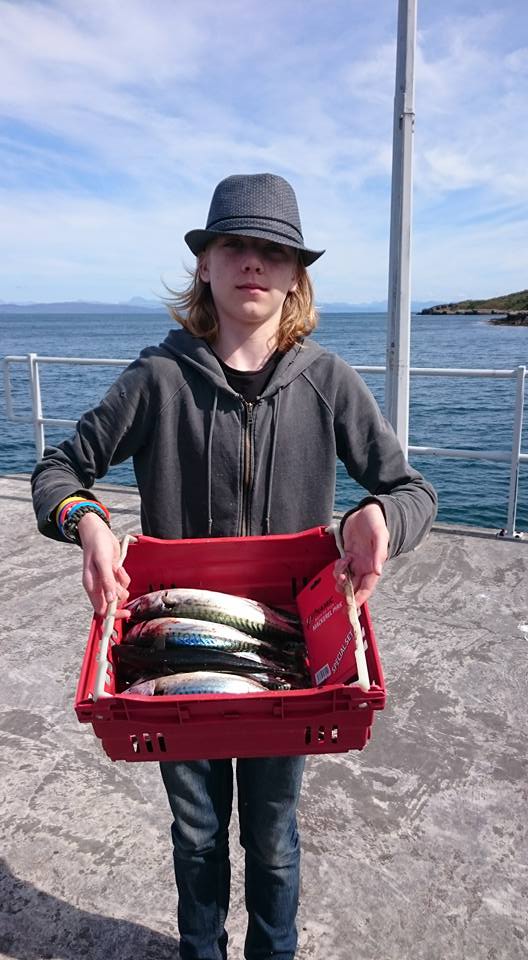 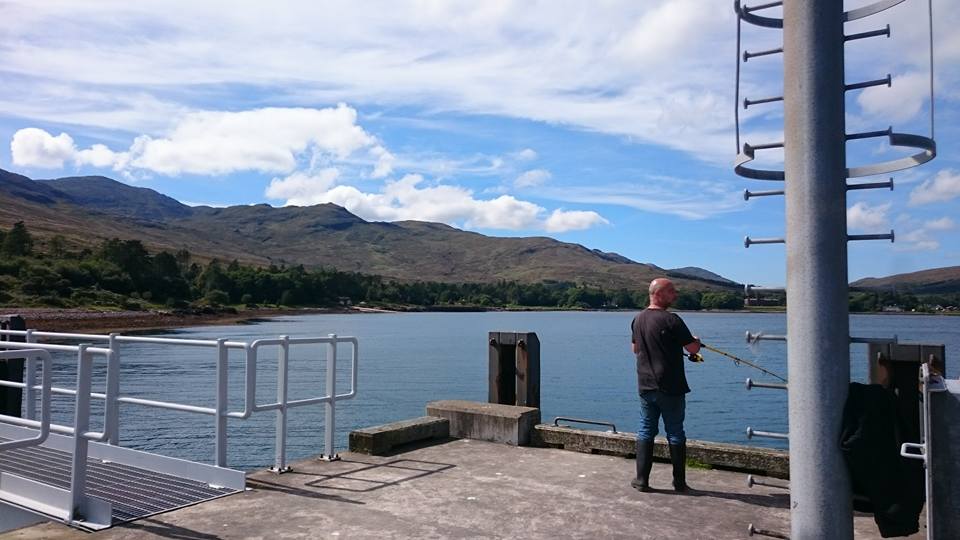 Both Davies and Scarlett caught, killed and gutted fish. At one point this afternoon a shoal of mackerel came in and Davies and I were pulling out a fish with every cast. Scarlett was taking them from the hooks and Ady was killing and gutting them. Go Team G! A proper production line.

The sun has finally come back out, which as ever seems to coincide with Back To School, which here in Scotland happens tomorrow. We’re looking forward to the return of summer now the official summer holidays are over and have lots of plans for a productive week out on the croft.