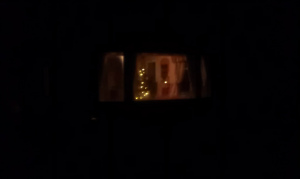 I didn’t even know Ady had taken this photo until it popped up in my flickr stream this evening. It’s a bit blurry round the edges, mostly black and quite possibly without my picking it out and explaining it a bit wouldn’t really mean much. In some ways it reminds me of a scan photo of an unborn baby. A grainy image in which some people can see the whole world, hopes, dreams, possibility and future. Certainly when looked back on 10 or 12 odd years later as I am now able to do at Dragon and Star’s scan pictures it is with a sense of wonder that such a collection of pixels is able to hold the promise of the person they now are.

So let me paint some words around the picture above. It’s taken from the outside looking in at the space that we currently call home. You’ve seen the inside looking out images on previous blogposts – a cluttered living space, busy with four noisy (you can’t hear us but I bet you can imagine how loud we are!) people, a dog and a hamster. Scene of all the drama that unfolds here in our lives. Still fairly miraculous to be up here perched on this hill at all, nestled in some of natures most fantastic backdrops. Off grid yes but thanks to the wonder of satellite broadband, mobile phones, petrol generator, iplayer, solar power, water butts and rather a lot of walking up and down the muddy hill carrying heavy things a home. A home with light, internet, the ability to cook dinners, boil kettles, take hot showers, watch Attenborough documentaries, listen to Christmas music, watch Christmas films on lovefilm instant, blog, bake bread, laugh, dance, sing, argue, play with lego, read stories, draw pictures, knit, close the door on the rest of the world and make plans for next week, next year, the rest of our lives.

What else can you see through that window? Our Christmas tree. Selected, cut down and brought home from a spot I can see out of the window while sitting on the sofa. Adorned with battery powered fairy lights, candy canes from ebay, chocolate decorations from Jinty’s shop, orange slices dried out on the woodburner. A selection of home made decorations- some by me, some by Dragon and Star, some swapped with Fliss after last weeks Christmas Fayre when we bartered my snowflakes and trees for her robins. Some, most touchingly arrived on the ferry yesterday when the Christmas camp I’d been feeling sad about not being at this year arrived in a box! Friends had missed us enough being there in person to put together a huge parcel for us. It contained a ‘snowman in a box – just add snow!’ hat, scarf, shiny pebbles for eyes, nose, mouth and buttons. A selection of my personal weakness – chocolate liqueurs, some small isle inspired fudge including Rum, Eigg (advocaar), Muck (chocolate), wristbands for Dragon and Star, a miniature bottle of whisky for Ady and a whole load of home made tree decorations including lavender hearts, cinnamon stick trees, crocheted wire snowflake and flowers.  So our tree has stuff made by us, stuff given to us by old friends and stuff from new friends aswell as sweet things to sneakily take off and snaffle when no one is watching! It is topped with a willow star I made from a switch of Rum willow covered with some orange garden twine. The collective plastic decorations of 20 Christmasses together including an artificial tree are currently in the loft space of our house in Sussex along with tinsel, hanging decorations and many sets of fairy lights. I love that this, our first Christmas in our new life starts with brand new decorations to admire and put away for next year already with their own stories to tell when we bring them back out year after year.

This week we’ll be busy putting final touches to our Secret Santa gifts for fellow islanders ready for a Christmas party next weekend. Plans are underway for a communal dinner for Hogmanay and an event for Burns Night. We won’t be with family this Christmas which will be hard indeed but at least we’ll be getting the very best of the reasons we left life living close to family behind – to be part of this community living in this beautiful place, building a whole new life for ourselves based on our dreams.

2 thoughts on “Memories are made of this…”