We’re very excited on the croft at the prospect of all the new births on the horizon.

Barbara Pig is beautifully pregnant and I think it’s fairly imminent – yesterday we build an extension to the pig pen, put up a new house and moved Tom Pig into the side wing. He broke through the fence to get back to Barbara. So we moved Barbara Pig out into the side wing and she broke through the fence to get back to Tom! All of the advice insists that we must seperate them though, much though she seems to want his company and he seems to want to play the proud expectant father. So we constructed a pallet and post maternity wing with cunning lift off section for access, filled the house with new straw and finally she seems nice and settled in there. I hung out with her for nearly an hour this evening and she seems pretty chilled out if clearly rather uncomfortable and ready to be done with pregnancy. 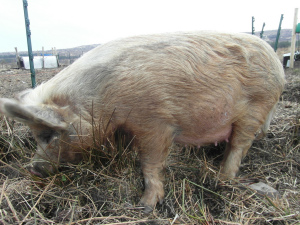 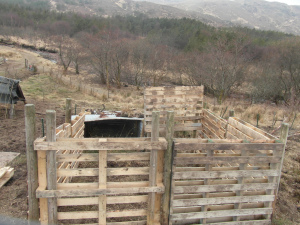 Our broody hen continues to do her thing on her clutch of marked eggs so fingers crossed for chicks within the next couple of weeks (chickens incubate for 21 days) and the penning of the ducks has paid huge dividends with two eggs collected yesterday morning and four today!

Watch this space for news from the polytunnel – three fish boxes filled with salad, loads of old ice cream containers sown with tomatoes, chillis and peppers and plenty of egg boxes ready to sprout herbs, sunflowers, peas and just because she could Star planted some watermelon seeds too! 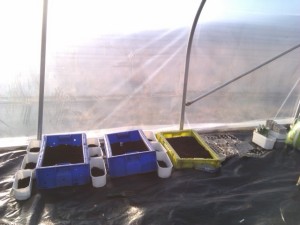 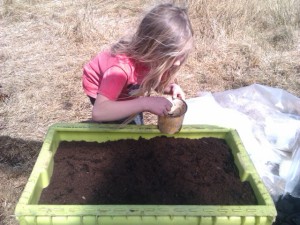 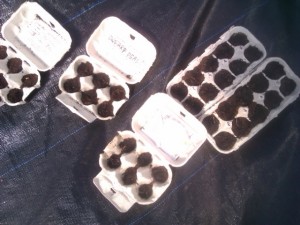 And finally I’ve been adding to my willow fence around the static by weaving in some more whips. It’s all very experimental but I was gifted the willow so all that I’ve invested is my time. If the geese don’t eat the new buds I think it will all take okay actually as the ground is perfect (ie very wet!) and the early whips took really well so I’ve just added new ones. I’ve also set up two nursery sites where I’ve planted some smaller straight whips for future use and I’ve put willow around our very first chicken house which I always felt was adequate for purpose of chicken sheltering but rather ugly. My next willow plan is a hedge around the polytunnel. Maybe next week… 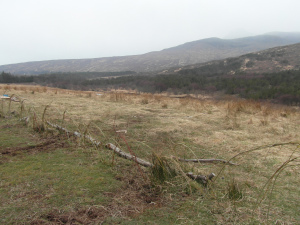 Ady and I had one of those perfect moments earlier today when we stood while the ducks swam below us on the river, the chickens scratched around, the kids and dog were playing beside the river and we’d just finished constructing the maternity wing for Barbara. We decided that if anyone else had our lives, if we’d WWOOFed for anyone with our set up we’d have felt so envious of their perfect set up. We’re not there yet, not by a long way but the potential to realise our dreams here is so strong and that feeling that there is no one else who’s life you’d rather have than your own, at no other time than right now is such a precious feeling it makes you want to bottle it, revel in it and celebrate it.