The end of February brought a monthly bring and share community meal with the theme of ‘winter leftovers’ to celebrate the impending end of that season. We took along sausages made from the pig we took through winter but really shouldn’t have done. 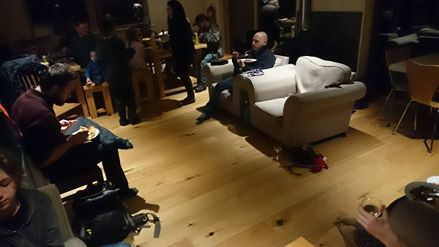 Followed the next day by an incredibly soggy beach clean on Loch Scresort beach. I was not in the best frame of mind for this hour or so traipsing along the slippery stones in the pouring rain gathering litter from the beach I have to confess. However a combination of the company and the innate rightness of such a task did propel me into both a better mood. As did sitting infront of the log burner with a hot cup of tea once I got home. 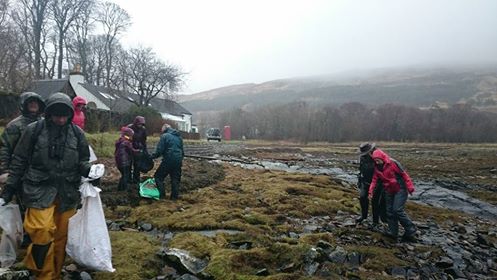 On our second day here on Rum back in 2012 we joined a beach clean over at Kilmory beach. Of the people who came along to that beach clean all but two have since moved on from Rum.

The day after that Davies, Scarlett and I headed off on the ferry to the mainland. Ady joined us the next day so as to leave the animals and croft for the shortest possible time in the care of friends. The purpose of the trip was a brace check up at the dentist for Scarlett. She is a year in, and about two thirds of the way through her treatment and doing well. I am in awe of both what can be achieved by orthodontics and Scarlett’s attitude towards what has been a real diet and lifestyle altering amount of treatment.

We made the most of the visit with lots of baths, TV and access to the supermarket. I have never yet been off without bumping into someone I know, which always serves to remind me that the community we live in here is bigger and wider reaching than just our little island.

We arrived home yesterday and Rum was kind to us while we moved cars about and carted shopping up the hill in wheelbarrows, holding off the hail and rain until about an hour after we were safely back indoors.

Today has been glorious – a real taste of springtime with sunshine warm enough to have me in my short sleeves outside for a couple of hours over lunchtime.

I managed to do my first round of seed sowing: peas, beans, tomatoes, chillies, peppers, leeks, onions, celeriac, asparagus, strawberries and three fish boxes of salad leaves ready I hope for our April filled with guests to have salad. That’s the polytunnel shelves nearly filled with seed trays but I have my four mini greenhouses waiting with new covers to take the next batch of sowing.

I did some more weeding of the outside strawberry beds and having taken a peek at the strawberries in the plastic covered beds alongside the polytunnel I realised that despite thinning the plants at the end of last season they have continued to throw out runners and need thinning again. I was in the process of this task (about a third of the way through) when a friend walked past so I chatted to her and her son for a while by which time the late winter sun had already dipped behind the hills and thrown the strawberry beds into shade which called an end to that activity for today.

I did managed to drill holes in the bottom of all the odd, outgrown or split wellies I had gathered up last week and washed so that when we hang them up to be part of the welly trail to Croft 3 they won’t fill with rainwater as it can drain out. I also made a start on painting them before the sun dipped too low for the sporran to have sunshine too. 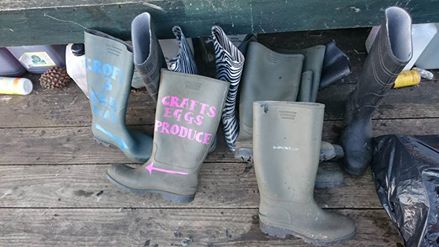 At which point I came in for tea, pizza dough making and some dvd watching with Davies.

The next few weeks is all about getting ready for the impending season – of visitors to stay with us and of visitors to Rum. The shed needs to be ready to re open for business and we need to have our share of deliberate crops to begin growing along with everything nature is encouraging to burst into life.