We’ve been off island to Mainlandland. Five nights away from Rum, the croft, our ‘normal’ lives.

We left on the Wednesday ferry and took the opportunity to go to Canna for a couple of hours. Canna is one of our neighbouring Small Isles; Rum, Eigg, Muck and Canna. Canna and Rum get paired by Calmac on the ferry timetable as Eigg gets paired with Muck, so on the days when the boat only does half of the islands it will do Rum & Canna or Eigg & Muck. This means that on the summer timetable you can go to Canna on a Wednesday for a couple of hours from Rum, or indeed as we did you can go to Canna and then stay on the boat back to the mainland.

We’ve been before a few times, always between Wednesday boats. I think this was our fourth or fifth visit. It happened to be a couple of days after the news story broke about the theft from the Canna shop which had become worldwide news. This meant we shared the boat with tv reporters and papparazzi, some of whom had brought along chocolate to restock the wee shop. We had a quick chat with one or two of the islanders to express support and solidarity, Davies and Scarlett had their picture taken by one of the photographers buying (and paying for using the honesty box!) some chocolate and we also called in to see the newly opened Hebridean Beauty and buy something from there too.

We had hired a car for our trip off, after agonising over prices of public transport via car hire & insurance, convenience of a car and lack of need for additional accommodation. We were staying at a friend’s flat in Queensferry, with spectacular views of the Forth road and Forth rail bridges. We arrived there just before 11pm and fell asleep to the sound of trains going over the bridge. 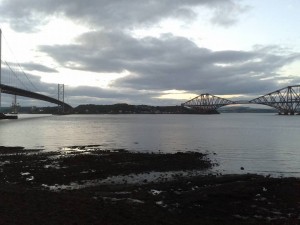 Our reason for being off was to go to all four days of the Royal Highland Show near Edinburgh. We went last year and had a fantastic time and so planned the same trip again for this year.

We saw everything the show had to offer – horses in the main arena, a variety of shows in the countryside arena including gun dogs, fox hounds, falconry, sheep dog training and fly fishing demos. Rural crafts including willow, coracle making, skin and fur tanning, wood working. There was chainsaw sculpting, pole climbing, mountain bike tricks. We watched cooking demos, tasted endless food and drink samples, got loads of free giveaways (pen and cloth bag supply for the coming year sorted!), chatted to people, got great ideas for crafts and things to make and generally had a lovely time. We managed to meet up with two lots of friends on two of the days too so it was sociable aswell.

One of the highlights of the trip was someone coming up to us while we were watching one of the shows to say he reads the blog and enjoys hearing about our adventures. He had recognised us from our photos so wanted to come over and say hello. That was so lovely, thank you! I don’t read that many blogs, only really those of people I actually know in real life and want to keep up with so I am always astonished at how many people read this blog and it’s lovely to meet readers. This is the fourth time we have met a reader of the blog in real life and it never stops being really special.

While off we took the opportunity to do a bit of shopping – Ikea and supermarkets, to stock up on various mainlandy bits and pieces. We had baths, telly and were able to sleep with the windows open which we never get to do here at home (its always too windy, too midgey or just too cold!).

As always though the very best bit of going off is coming home again. Home to Bonnie going mad with delight at the pier when she spotted us getting off the boat. Home to collecting the ducklings and chatting to some daytrippers about them as they stopped to coo over them. Home to walking around the croft checking on all the creatures and crops and marvelling at how much everything and everyone had grown in just five days. Home to our own beds, our own food and our own space.

One thought on “Making a show of ourselves”