It’s been very November-y here on Rum today, low low cloud, drizzly rain and the odd gust of wind. It’s still very mild for the time of year though. I decided to do one last big bramble picking session to bust our aim of 200 jars. I was out for over 3 hours but picked nearly 5kg of brambles, which I turned into 37 jars of jam taking us to 207 jars made. I’m out of sugar now but still have a few jars left so may well pick any last brambles on my way to and from the village over the next week and bung them in the freezer for later use but I’m officially calling bramble season over.

It’s been an excellent year from them and I have really enjoyed the meditative act of ambling along picking them, getting down low to the ground, seeing Rum from a different perspective and having lots of time to think and ponder while picking. It’s probably been the nicest bramble picking weather I’ve had here on Rum which has helped. I’ve also had various brambling companions over the season – Ady, Davies and Scarlett at various points, both my parents, two different visiting friends, so I’ve also had some lovely conversations and company while picking too.

We’ve experimented with new flavours of jam aswell as our tried and tested ones from previous years and have ten different types this year: Bramble & Rosemary, Bramble & Lavender, Bramble & Rose, Bramble & Violet, Bramble & Chilli, Bramble & Ginger, Bramble & Apple, Bramble & Cinnamon, Bramble & Vanilla, Bramble & Mulled Spices. We have at least 20 jars of each and will be recording which are most popular next season when we start selling ready to know which ones to make more of this time next year.

This afternoon for a final wouldn’t have happened if I’d not been picking brambles treat I heard strange noises coming from the beach nearby and peeped around the corner to see three seals basking on the rocks. I watched them for ages before they finally spotted me and I spooked them into splashing back into the water. 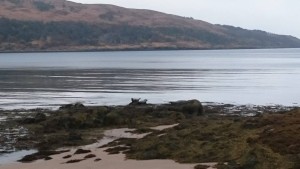 My next foraging adventure is hedgerow materials for basket making, so I’ll be out with secateurs rather than bags, I suspect I will still be getting pricked fingers and scratched arms though!

Todays ferry brought new additions to the Croft 3 creatures in the shape of five muscovy ducklings from the Isle of Muck – they are gorgeous and will hopefully settle in happily here. They are excellent grazers and should grow to close to the size of our geese and spend their days swimming on the river and helping to keep the croft grazed. For now they are settling in in the safety of the fruit cage but seem happy with their exciting ferry trip and new home. 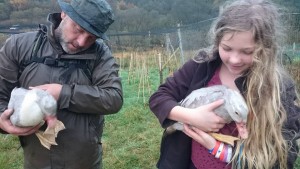