I was talking to the headteacher of the school here last week about Home Education. I was also talking to a journalist last week about Home Education here. Home Educating Dragon and Star here on Rum is very, very different to Home Educating them back in Sussex. I can’t envisage what life might have been like for us if we’d lived here from when they were tiny and to be fair as we are such different people in such different points in our lives now it’s an impossible imagining anyway. But doing HE the way we have done was made loads easier by close proximity to so many diverse opportunities in Sussex. We were just 50 miles from London – when Dragon showed an interest in dinosaurs aged 4 it was an hour or so by train and we were there in the Natural History Museum walking around that iconic skeleton in the foyer. When he was interested in art we did the same and headed to the National Portrait Gallery. Before our kids even reached school age they had walked around all of the major landmarks in our capital city. Star’s interest in animals was more than met by visiting zoos, safari parks, animal sanctuaries, pet shops, open farms etc. We had art galleries, museums, libraries, theatres, cinemas on our doorstep. I ran social groups for Home Educators and organised camps, day trips, outings and workshops. I did a lot of driving, a lot of emailing, researching, booking and coordinating but it was all utterly do-able given our geographical location.

We’re at a different stage now -one where their passions and interests are more focused and have definite direction. It’s the chief reason why we’re here on Rum really – because we decided it ticked enough of the kids’ boxes to make up for the loss of some of the potential opportunities. We decided that forging close relationships within a community was more important than passing contact with a larger group of people. That having eight acres of his own and eight miles across of island to explore and adventure in was better than forest school and bushcraft camping experiences for Dragon. That living on a National Nature Reserve, home to the longest running large mammal research project and location of countless wildlife documentaries made up for keeper for the day zoo experiences and monthly trips to the events at the local RSPB reserve for Star.

In the last week we’ve been out on the Sheerwater trip with the Community Ranger – identifying birds and watching out for mammals. 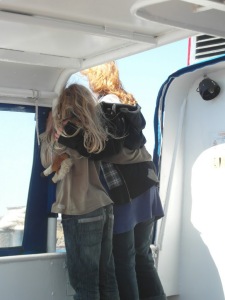 We’ve been growing food – Star comes down to the polytunnel with me daily to water, harvest and check the crops in there along with growing her own stuff. She also helped build the raised beds. Dragon and I are planning a herb spiral and he is wanting to learn more about the medicinal benefits of herbs and have a go at growing his own, learning to identify them and find out about their culinary uses too. 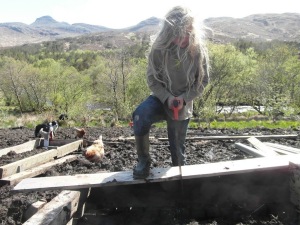 They’ve played with the piglets, fed the birds, helped plan the pens for the next lot of animals arriving and spent time with the dog. It’s been a very outdoorsy week! 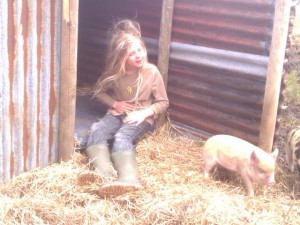 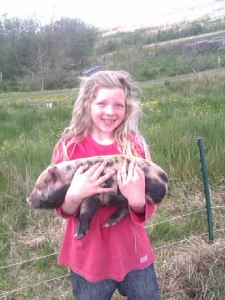 The piglets have been tamed to such a degree that they are now cuddle-able. This will mean their ultimate status as food is way easier in terms of a stress free ending, but rather trickier in terms of emotional attachment. Star tells me this will still be fine because she knows how happy a life her bacon will have had. I’ll let you know how that theory pans out…

On Sunday we took part in the Big Lunch – a nationwide event getting neighbours and communities to eat lunch together all across the UK. We had a great turn out of residents, bringing food to the table to share. There was bread, jam and cakes from us, pasta salad, soup, rice, pies, cheeses and more from other islanders and the school had been learning about healthy eating and made bread to bring and share too. We had kids activities and bunting. And balloons! 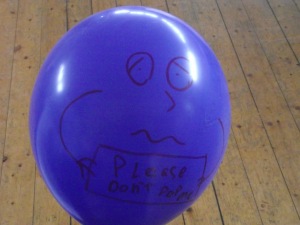 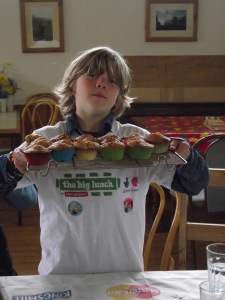 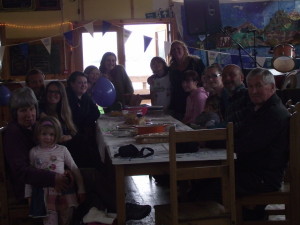 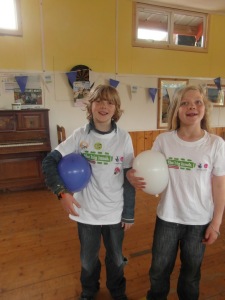 Last night we had a surprise visitor in the shape of a fellow islander. He’d been out fishing and caught two brown trout so brought them up to barter for produce and see if Dragon and Star would like to learn about gutting them. As it goes they have done fish gutting before a few times but this involved a biology lesson including finding the swim bladder, the heart and liver and then investigating the contents of their stomachs. The female (definitely so as she had a belly full of eggs) had nothing of great interest but the male contained 11, yes 11 complete newts. Dragon squeezed them out of the stomach and lined them all up. It was amazing! 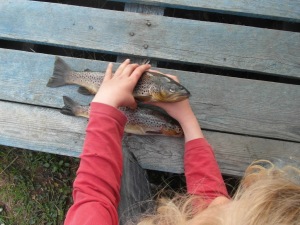 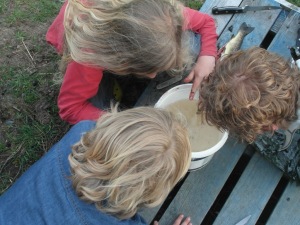 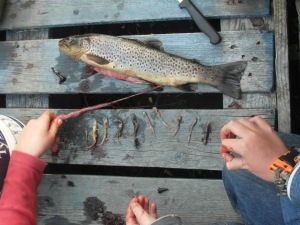 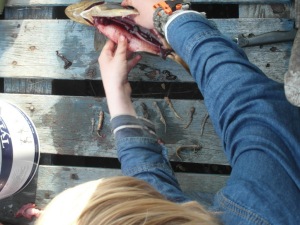 And then we had them for dinner – the trout, not the newts! And very delicious they were too. Next he has promised to show them a deer’s stomach contents – the cull begins again in a few weeks.

Today the Reserve Officer showed me an eagle pellet – it was enormous! I took a photo to show Star who massively impressed me by taking one look at it and proclaiming it ‘an owl pellet’ then amending it to ‘eagle pellet’. To the casual observer it looked more like a cat’s toy mouse but Star knows her stuff! We’re hoping to do some bat surveying in the coming months here on the island and participate in a seal pup count later in the year too.

There are the experiences we traveled far and wide, paid lots of money for and were so desperate to provide for our children. Now the tourist season proper is upon us we are once again answering the same old questions – three times today I was asked how many children are in the school here and all three times I was told what a wonderful place this must be to raise children. Rum is not without it’s faults and downsides. Our current lifestyle is not without challenges and pitfalls but it is certainly an amazing place to grow up, surrounded by people, wildlife and opportunities way beyond even what we could have hoped for.