A productive few days in Croftland.

The compost loo is finally and officially open for business. It’s been a long time coming but thanks to all sorts of efforts, generosity and donations from a whole crew of people we now have a compost loo on Croft 3. The crowdfunding efforts were a massive help in financing it, friends who helped spread the word online and donated funds, the WWOOFing newsletter which I wrote an article in and helped highlight our plight putting an ex WWOOF host (and good friend) in touch with us to say he had a loo he would love to give us if we could get it here. Our new crofting neighbours who took a detour on their way home to Rum last time they were off island to collect the loo… the list goes on.

And now it is here, installed and working. We have signs up, it is decorated with stories of toilets through the ages, has instructions for use and a bag of soak to aid the composting stacked up next to it. We’ve used it as have several recent guests to the croft and suddenly life has gotten a whole big step easier once again. 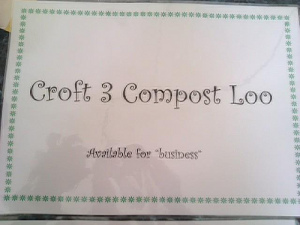 Our beds are still a work in progress. They are all made and filled with earth  having been sheet mulched with cardboard and filled with lovely rich pig processed earth. We have constructed net cages around the ones we have planted up using old tent poles which were a casualty of our first summer here when we underestimated the winds and lost a tent and a canopy porch. That will be finished once more netting arrives, I’m waiting on the post. So far I’ve planted up some sweetcorn I grew from seed in the polytunnel, some squash and pumpkins which are from a pumpkin the kids and carved for Halloween 2009 and saved and dried the seeds from so were very excited to see germinate, some courgettes and cucumbers. I have various beans (french, runner, dwarf, broad) ready to plant out and some peas once the netting arrives. There is no point in planting stuff out without nets as it will fall instant victim to crows, deer and our own chickens.

Exciting news from the polytunnel is that we have harvested (and instantly consumed!) our first strawberries – two giants picked on Tuesday and shared, half a fruit each between the four of us. I think of all the foods I am purist about (has to be local, reared to high standard, seasonal etc) strawberries are the richest rewards. Holding firm for that first home grown or hand picked fruit of the season makes all of the walking past the unseasonal December supermarket strawberries worthwhile. Not something that is a huge temptation living here of course but I still get to feel smug! 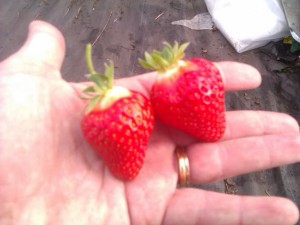 So far we’re keeping all the birds safe – I returned a land census form this week which had us tallying up our animal totals and we have a lot of birds! We have various crow scaring measures in practice including plastic bottles and cut up tent material (from the same deceased tent as those poles I mentioned earlier) and the turkeys are netted until they are a little larger.

We’ve been busy with the crafty stuff too. I’ve been setting midges, clegs, thistles, heather and other little specimens in resin and then turning it into pendants, earrings, keyrings and wee keepsakes. I think they look pretty good, we’ll see how they sell. 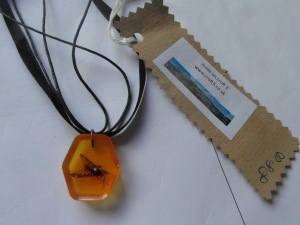 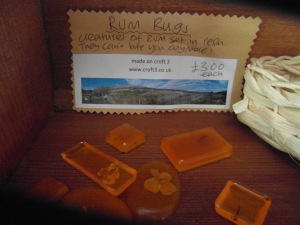 I’ve also been knitting more scarves for my ‘moods of Rum’ range inspired by sunsets at Kilmory beach, stormy skies over the peaks, The Sea is Alive trips on the Sheerwater and Autumn Colours on the hills as they have been selling well and needing restocking. Dragon has had a commission for some postcards of neighbouring Small Isle Eigg so has been working on that too.

We’ve been working on logos and branding for the Croft and come up with a really nice recycled brown envelope idea with one of Ady’s panoramic shots of the Croft with blue sky and Dragon running down the hill which I’ve been putting on everything. We have an information sheet about us and the croft on display at the croft gate and some elderflower cordial on sale at the honesty cupboard.

And that about brings us up to date.