Be it ever so humble….

It’s almost as if we’d never been away.

Just as when we first arrived on Rum (and countless times since to be honest) the grand return was not entirely straightforward. We had arranged a lift for Ady, Kira and I along with the essential first night back stuff to the bottom of the croft. Davies, Scarlett and Bonnie walked from the pier.

We arrived back on a stunningly beautiful Rum day. It was blue skies and sunshine, ice twinkling everywhere and uncharacteristically rock hard ground. It was also bitterly, bitterly cold. The first glimpse of the island from the ferry followed by welcome home hugs from friends and balloons tied to the Shed echoing the sentiment were enough to have me feeling happy of heart. 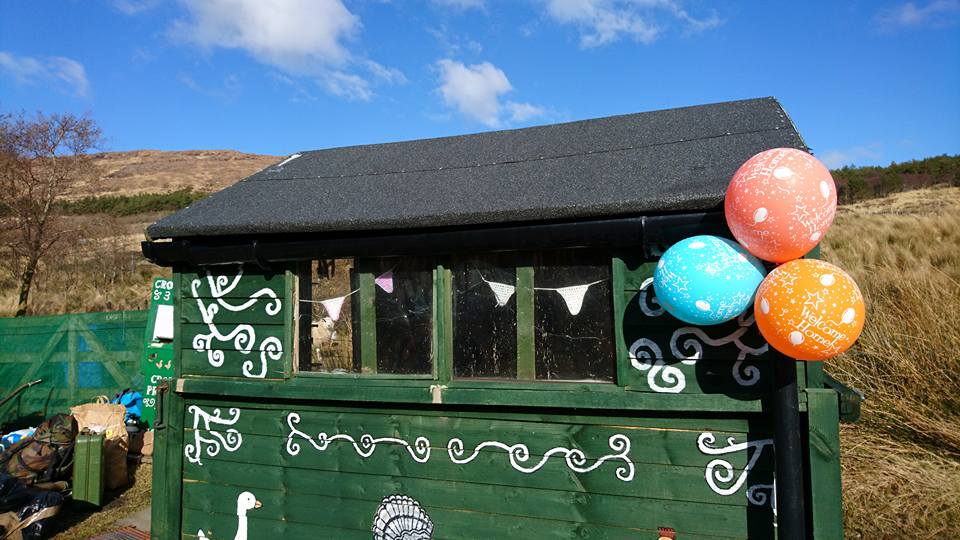 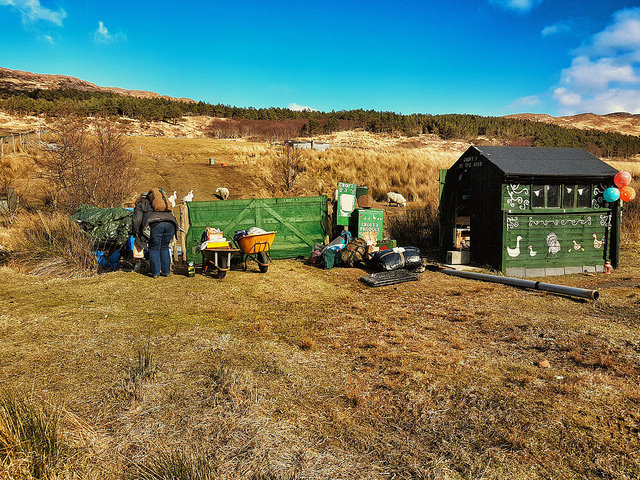 We fed the chickens, geese and sheep who were very happy to see us and walked up the hill carrying the first of many loads back up. 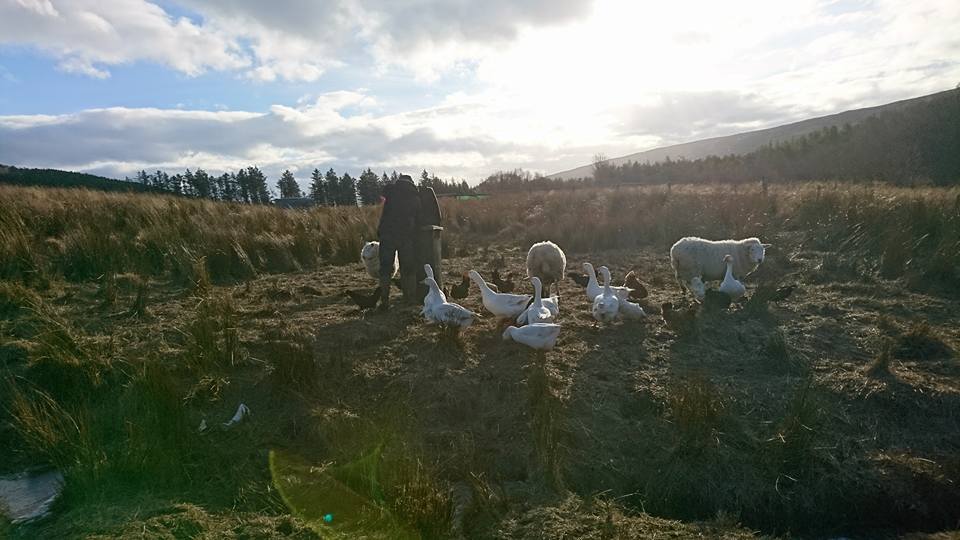 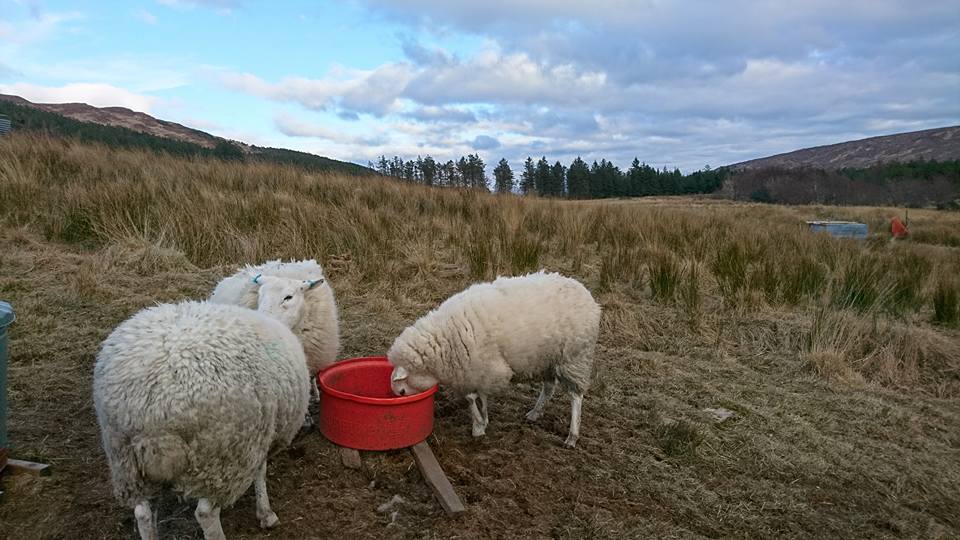 The first step inside the caravan was not quite so pretty or poetic. We were not alone. Unfortunately in our absence some other creatures had decided to make use of the space and we had been invaded by a pair of rats. This was always a very real possibility, Rum has a big population of rats with very few natural predators and plenty of food in the way of bird eggs, dead deer and so on. Our presence on the croft has both attracted rats with bird feed and crops and repelled them with Bonnie, Kira and our careful monitoring of them with occasional intervention by way of rat bait. With us gone for nearly 4 months the deterrents were absent and all of the lures still present.

Despite anticipating rats and taking action to prevent them it was still unpleasant to discover we had failed and they had got in. Their entry route was gnawing through the plastic (why?!) grille that covers the vent to the fridge. They had then gone through the cavity behind the fridge into the cupboard under the sink. This had netted them the delights of chewing through the plastic container holding some sweet chilli sauce, four water jug filters and the labels on some tins of tuna which was all that was under the sink (aside from pots and pans). They had accessed the cutlery drawer from behind and chewed through the soft rubber grips on the potato peeler and the tin opener, had a good chew on a wooden spoon and the cutlery divider I had lovingly created out of wood when we first moved here. (The spoon and cutlery divider provided firewood, the tin opener and potato peeler have been sterilised and are now back in use as a reminder of ‘that time rats got in’. I can confirm that the presence of soft grip rubber does make them nicer to use than the chewed remains of harder plastic below, but not sufficiently to replace them). They had finally decided the party was over inside the cupboard and gotten out by chewing a small hole through the side out into the main caravan. There they had feasted on a tin of hot chocolate powder entering via the plastic lid and a tub of mixed nuts and raisins. There is no evidence of them getting into the bedrooms but the following day while cleaning the bathroom I found a single tube of toothpaste with a hole gnawed through. Thus proving that even rats recognise the importance of good dental hygiene after a feast like that! 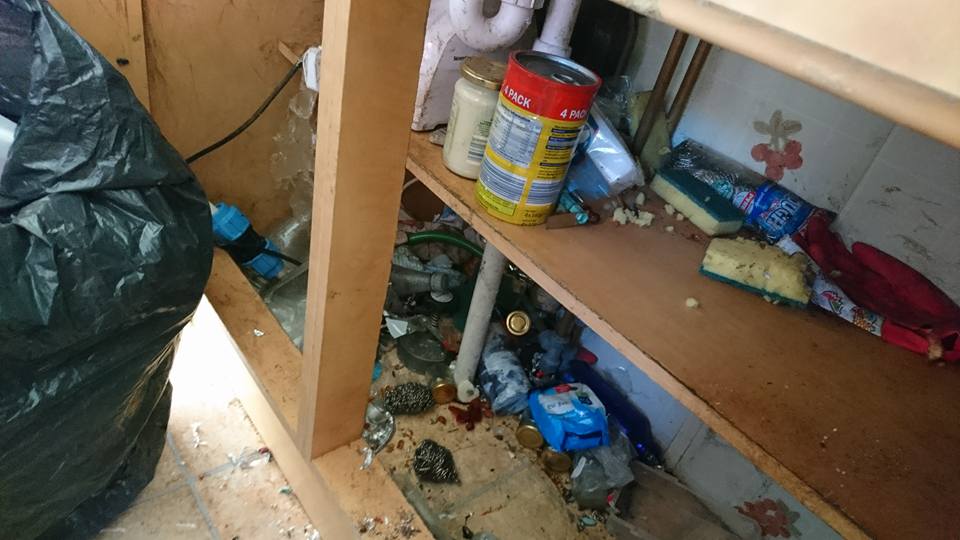 It was pretty dire to come back to but we had cleared up the damage within an hour, dealt with one rat who was still at the crime scene hanging out in the cupboard and shortly afterwards Bonnie found it’s partner and dealt with that too. The plastic grille has been replaced with a metal one, all evidence of rats (other than souvenir kitchen utensils) have gone and all visitors to the caravan now are of the welcome variety.

The next challenge was three months worth of damp to deal with. Again this was anticipated and we had done what we could to mitigate the impact and brought back with us suitable cleaning materials to deal with it, along with brand new pillows, duvets, sheets and covers as we knew that these would be the likely casualties. Sure enough we had a days worth of wiping down walls and surfaces with mould cleaner and killer spray, a trip to the skip to dispose of mouldy bedding and a day of heating and airing the space. We are still in condensation and damp season, and living, cooking and breathing in the space only adds to the problem but at least we are now back to wipe down, air and heat the space again. Dehumidifiers are the obvious answer but power constraints mean they are not an option for us here.

The rats and the mould were semi expected issues. We knew they may be something we faced on our return and we had come back prepared to deal with them. What we did not expect was sub zero temperatures meaning that our water supply was frozen. We have had no water at least once or twice most of the winters here and usually anticipate it happening the morning after a very cold night and ensure we have a kettle or pan filled ready for that first morning cup of tea knowing it will have thawed out and be running again by lunchtime. In the early days we even had our bottled gas freeze but a cabinet for the gas and lagging the bottles seems to have alleviated that issue even in these very cold days. The water was a different story though as not only had the pipes frozen as the ground was frozen but the actual water supply in the river was also frozen solid. The waterfalls, rivers and ground were all rock hard. 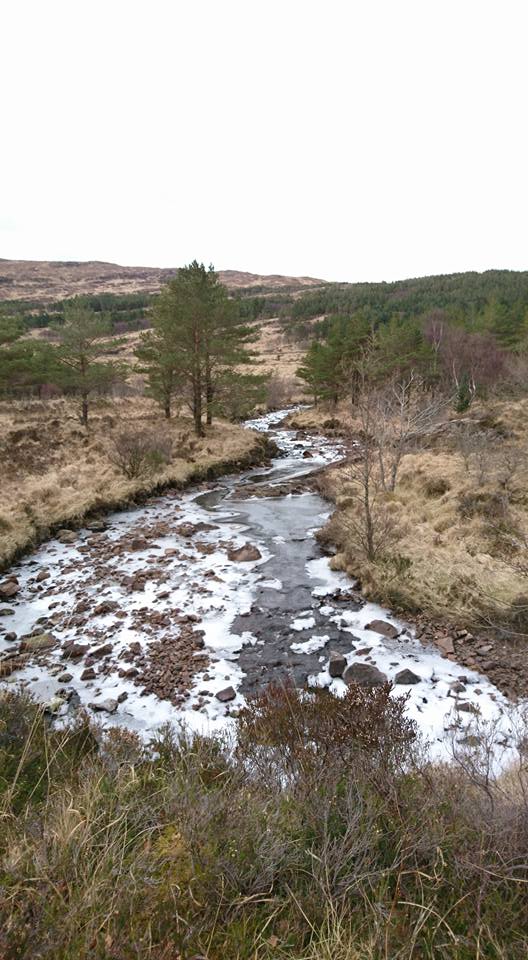 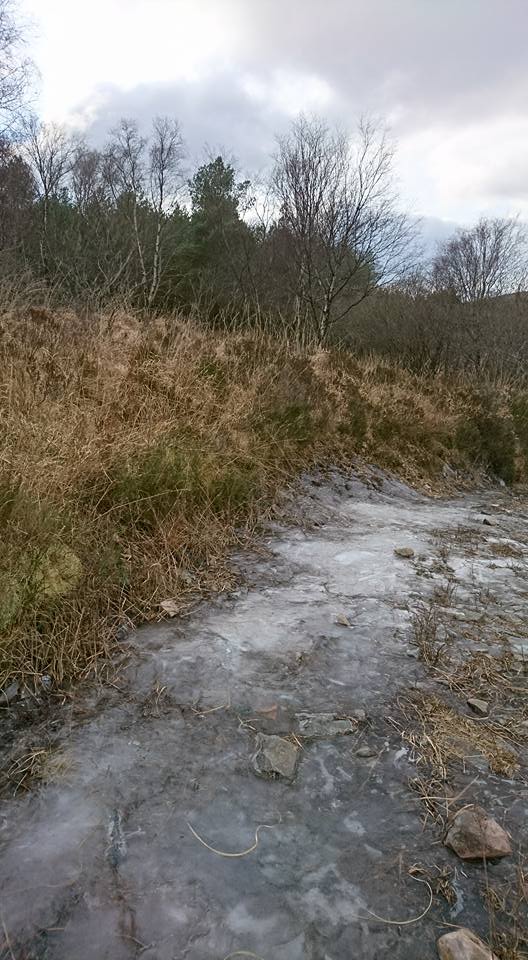 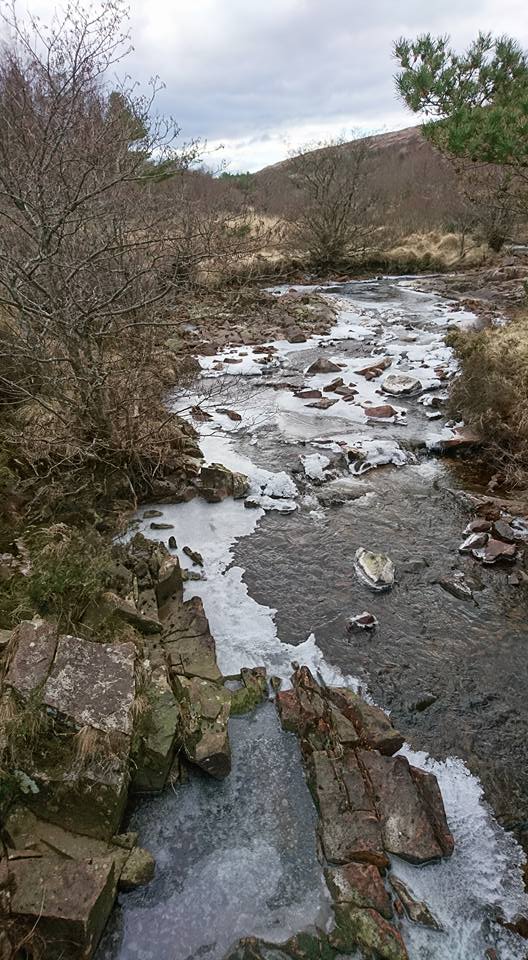 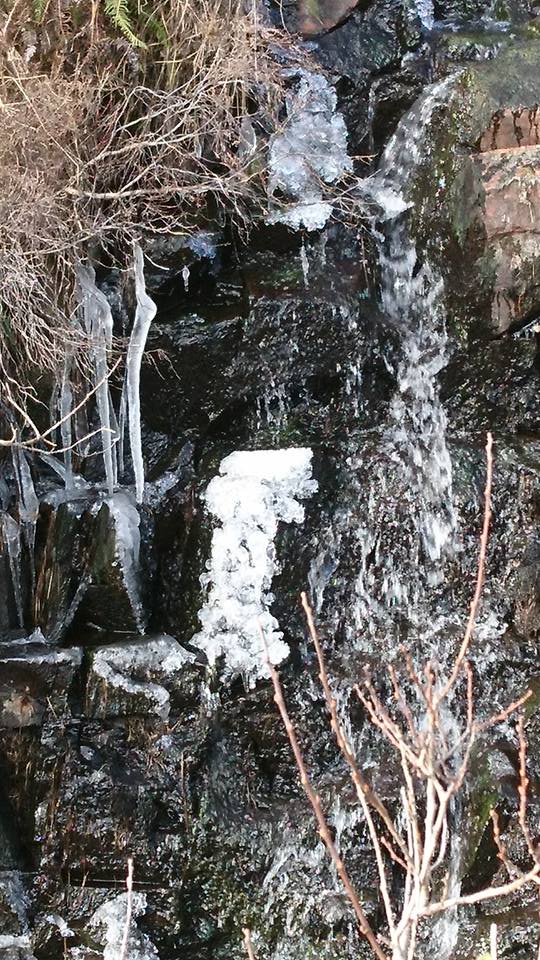 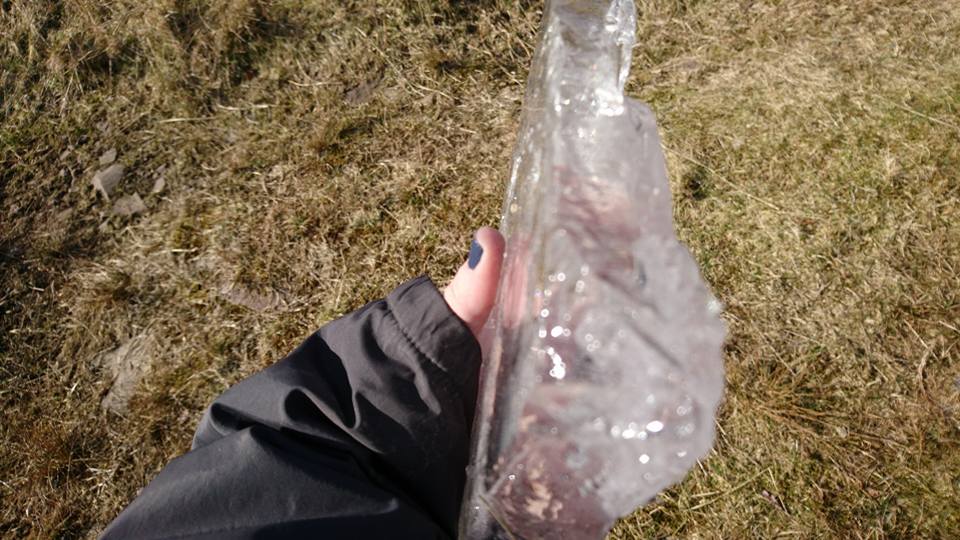 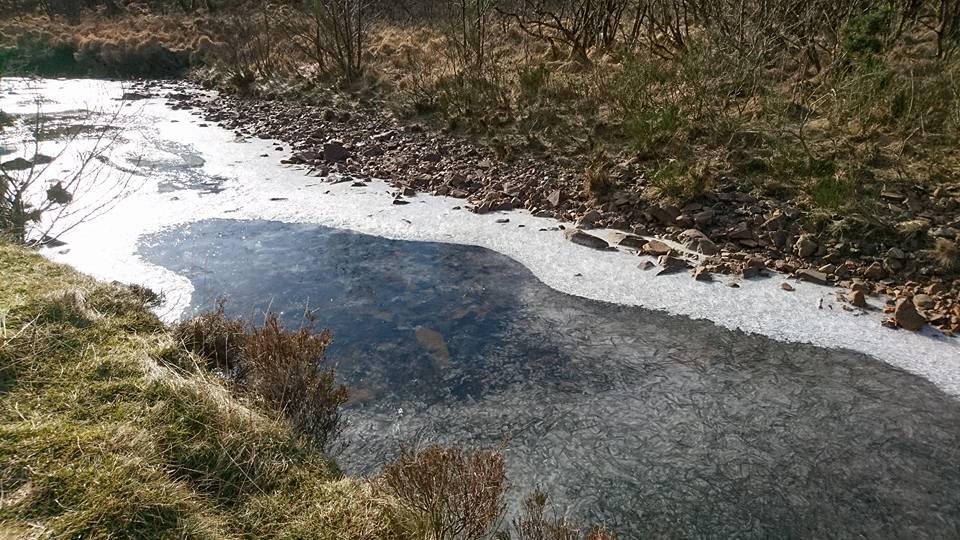 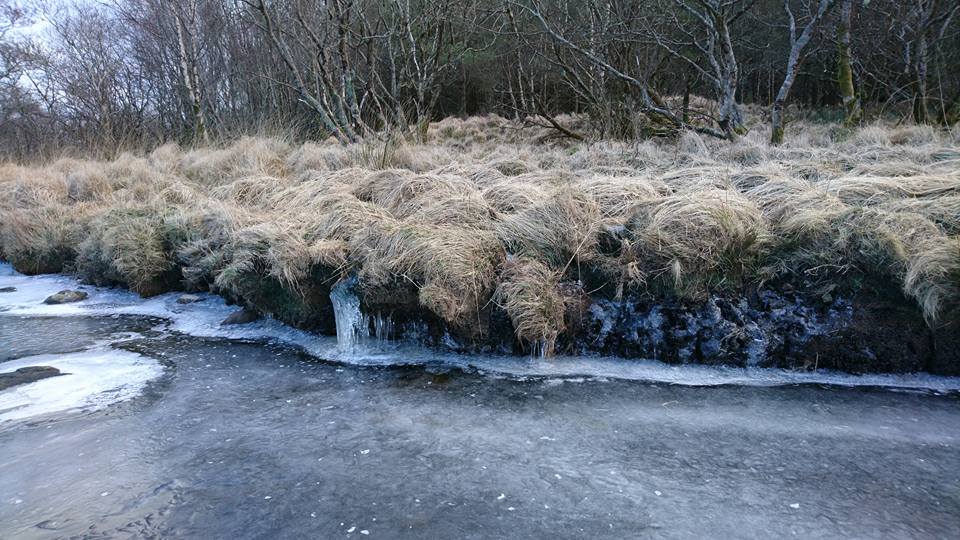 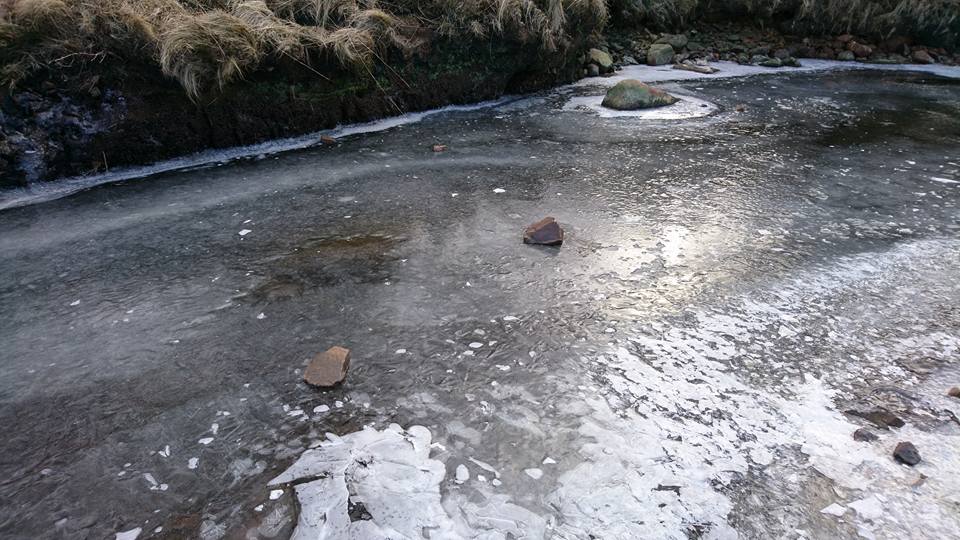 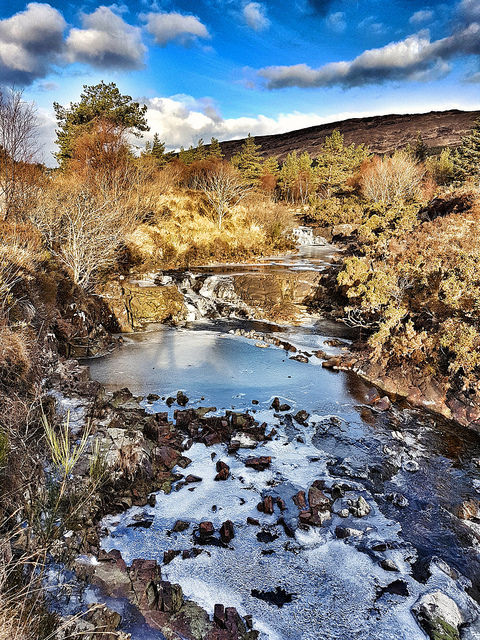 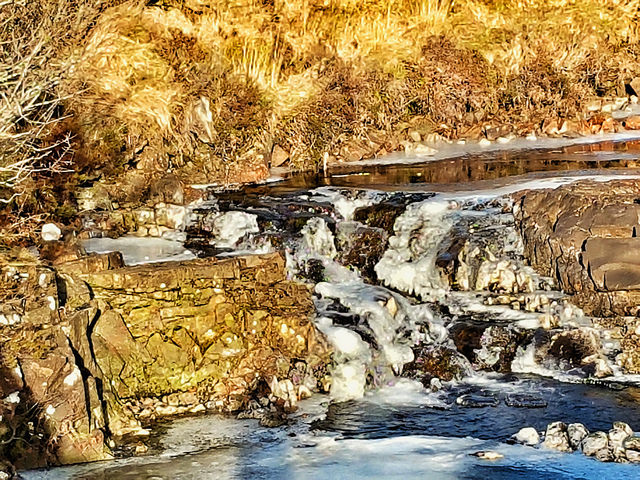 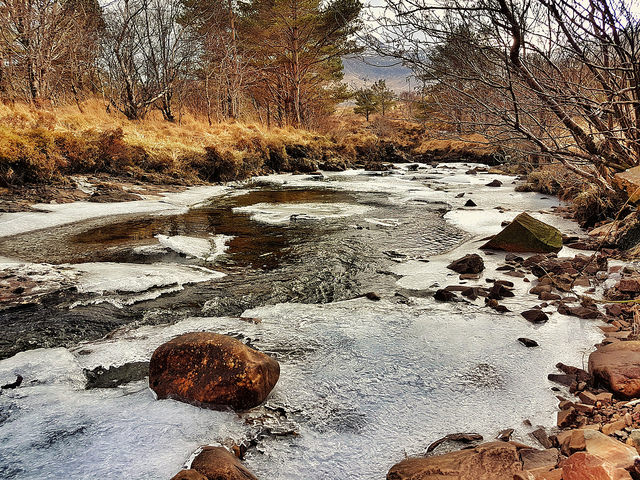 This meant that both the clean up operation in order to make the caravan liveable plus the actual liveable-ness of being in the caravan was impossible. A quick family conference, taking in the implications of no water for cooking, washing, drinking or flushing the loo meant we all agreed that staying a night or two elsewhere while we got the caravan back into order was probably the best plan. So while Davies and Scarlett enjoyed a slightly prolonged dose of mainland delights of power and internet and slept off the journey, Bonnie and Kira moved back into the caravan / Croft with freedom to roam once more and rat prevention duties and Ady and I spent a couple of days blasting out music, getting a new cowl fitted onto the log burner so we could get that lit, unpacking the car and getting everything up to the caravan and put away, everything cleaned and organised and turned back on. After two nights away we were still without water but had collected sufficient to keep just outside the caravan and mean filling the loo cistern with a watering can and boiling pans to wash up with enabled us to move back in and sleep in our own beds again. The following day we had a trickle of water running once more and two days after that the big thaw has happened and we have hot water once more and today had our first showers back in the caravan. For a few days it was a return to our early days here though, walking over to the river countless times each day with containers to fill up with water. 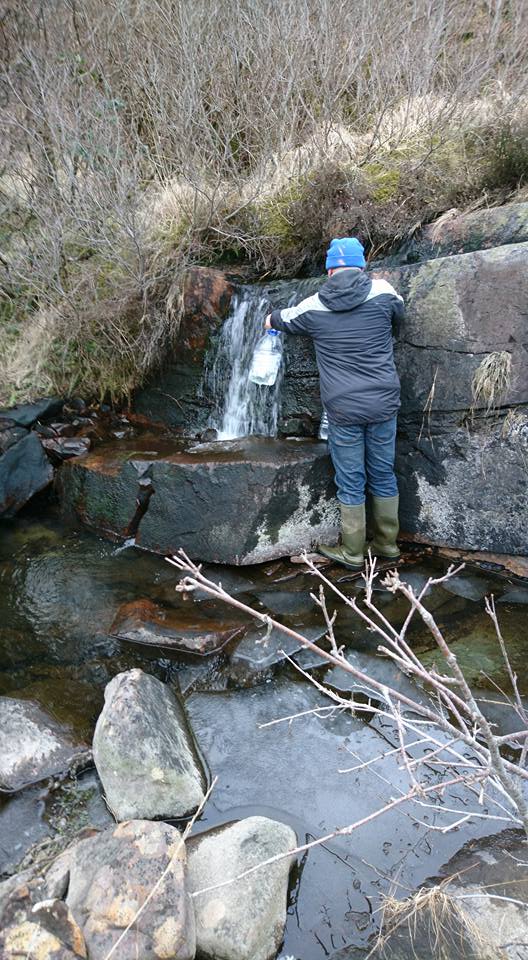 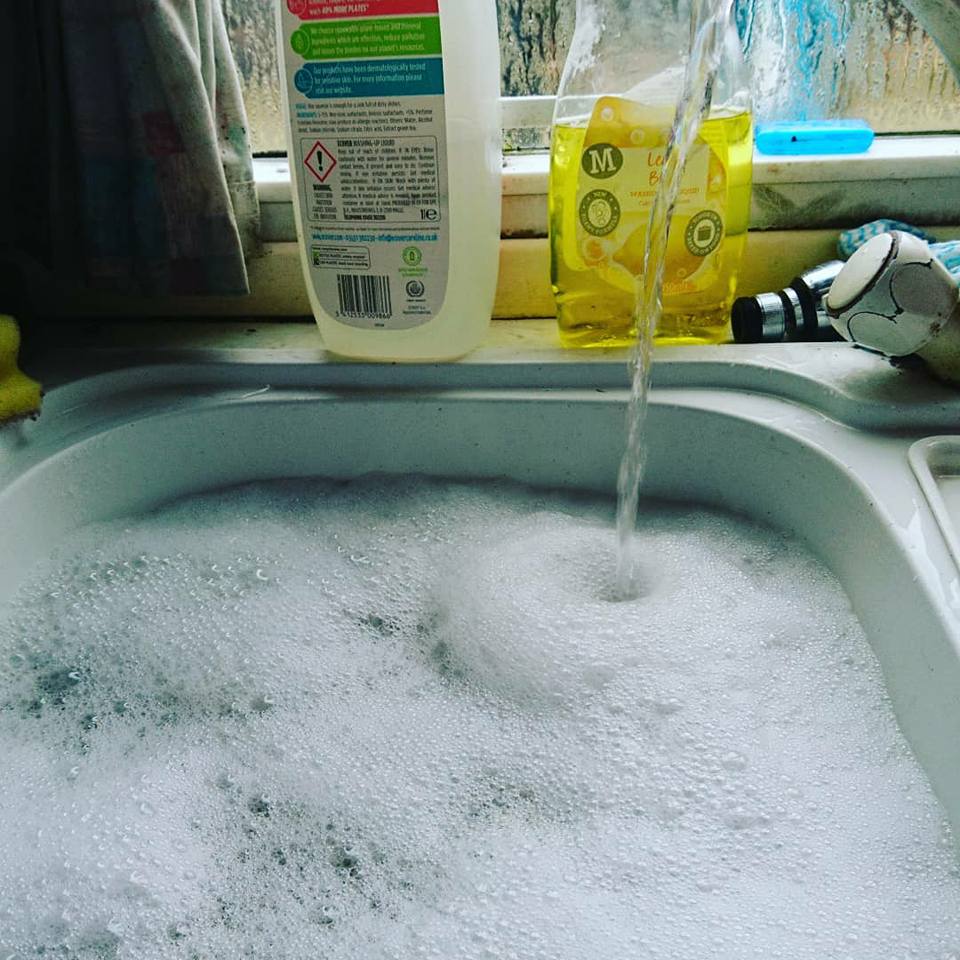 That concludes the ‘getting the caravan back to normal’ task list and we have started moving onto the next phase of picking our lives back up again. Today this meant gathering ducks who decided over Christmas to migrate down to the village. There were 10 ducks hanging out down there, now there are four and six birds back up on the Croft captured in a pen while they are re-educated that this is where they live and get fed. Hopefully the remaining four will be gathered up tomorrow and the pair of turkeys who were also rehomed down in the village with friends will be coming home again too this week. Our livestock holding is depleted to what we had last year which is precisely what we wanted – less creatures, more efficiency.

The freezing conditions mean there is no urgency with crops just yet but it is only a matter of weeks until the ferry timetable changes to the summer schedule and with that will come the first of the seasons visitors so guiding people to the shed and making sure there is an attractive selection of items to buy will be next on the list of jobs to turn our attention towards.

As I said, it feels almost as though we’ve never been away.