For the past two years we have been off this week in June at the Royal Highland Show. This year we decided not to go as it is a really busy time on the croft and our previous Bonnie sitters are no longer Rum residents, plus having done all four days in 2014 and 2015 we felt we had quite comprehensively done the show and could take a year or two off.

It’s very much turned out to be the right decision. We have had eggs hatching at a rate we are struggling to keep up with in terms of creating nursery pens and houses. We are currently at about 30 young birds – mostly chickens, with the first clutch of duck eggs hatching too. There are pens with chicks a few weeks old who are already independent of their mother (who we released, she had done her job!), five lots of chicks with their mother ranging from day old to several weeks old, one pair of mothers who have only managed to hatch one egg successfully between them and are determined to co-parent it. We have a duck with six ducklings all learning to swim. 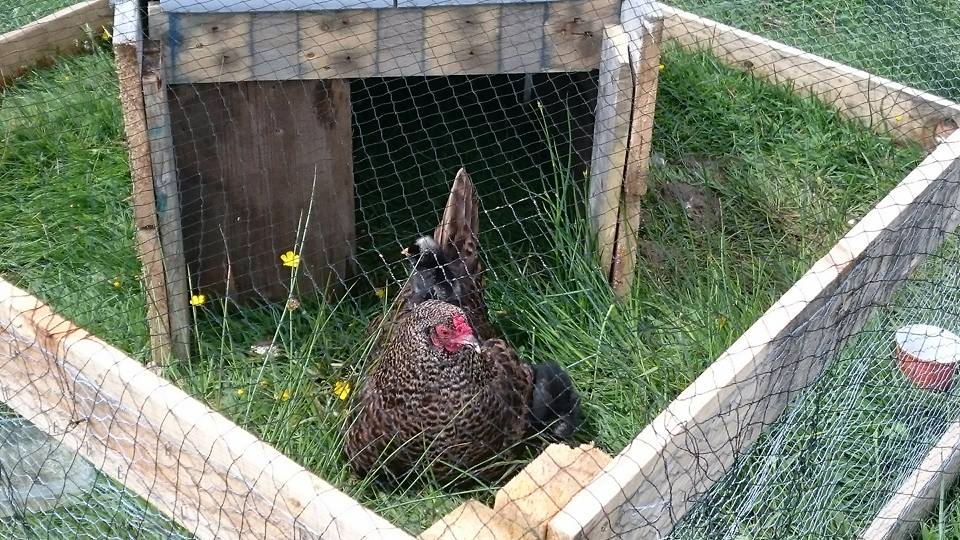 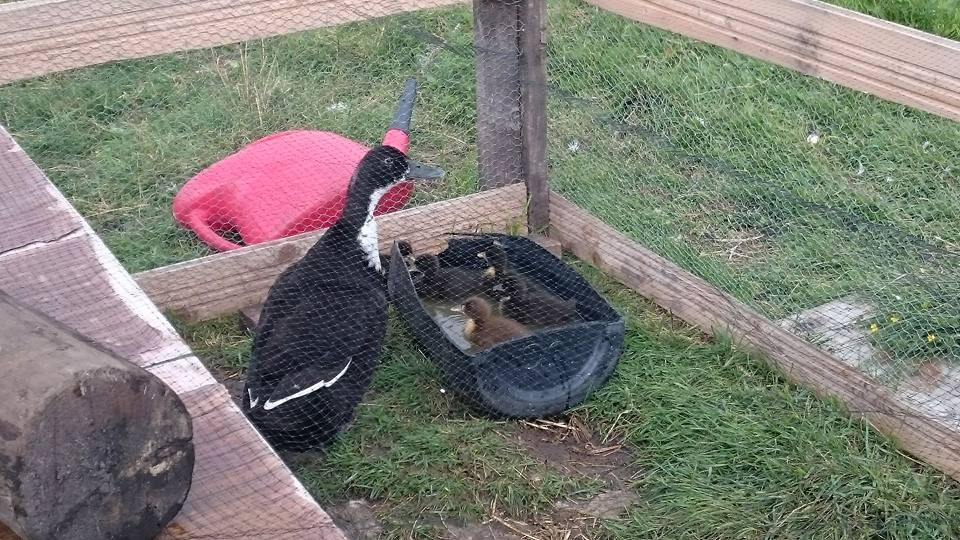 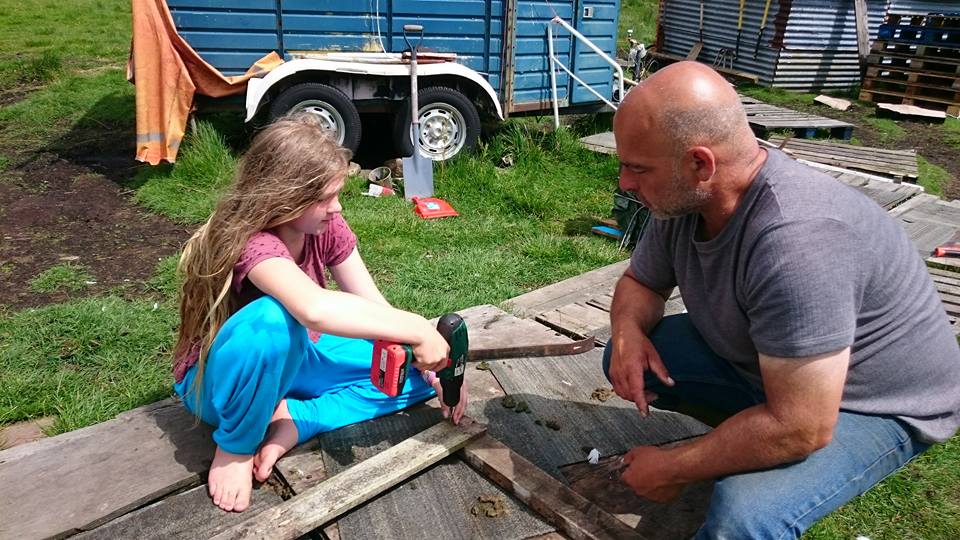 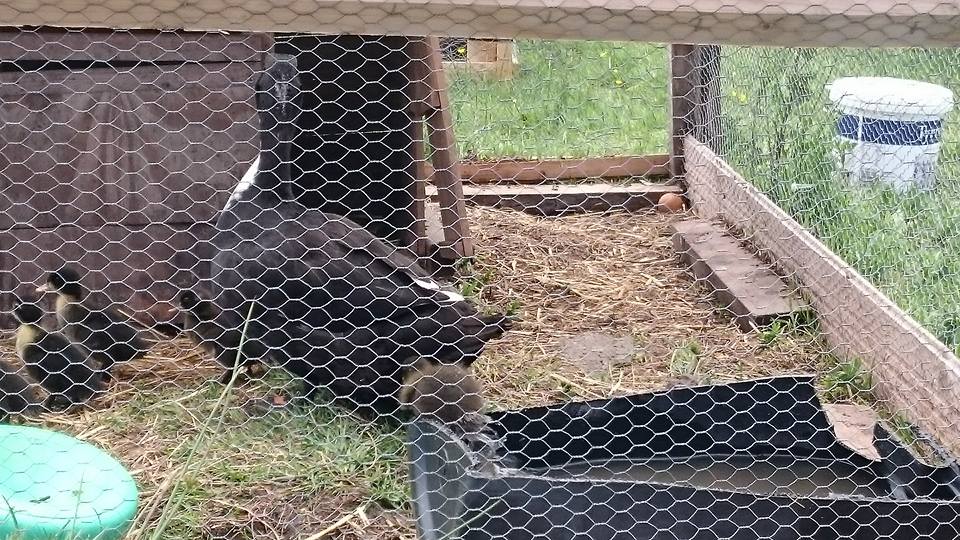 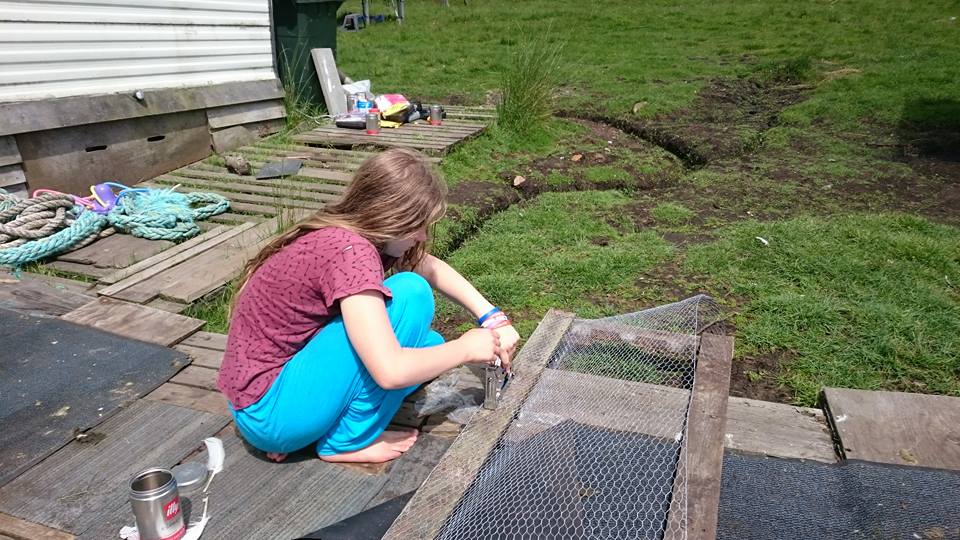 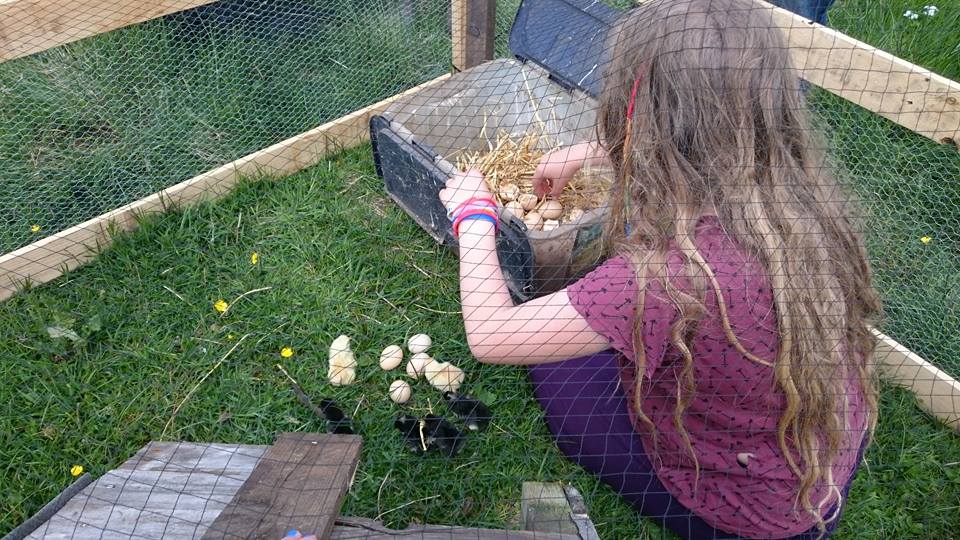 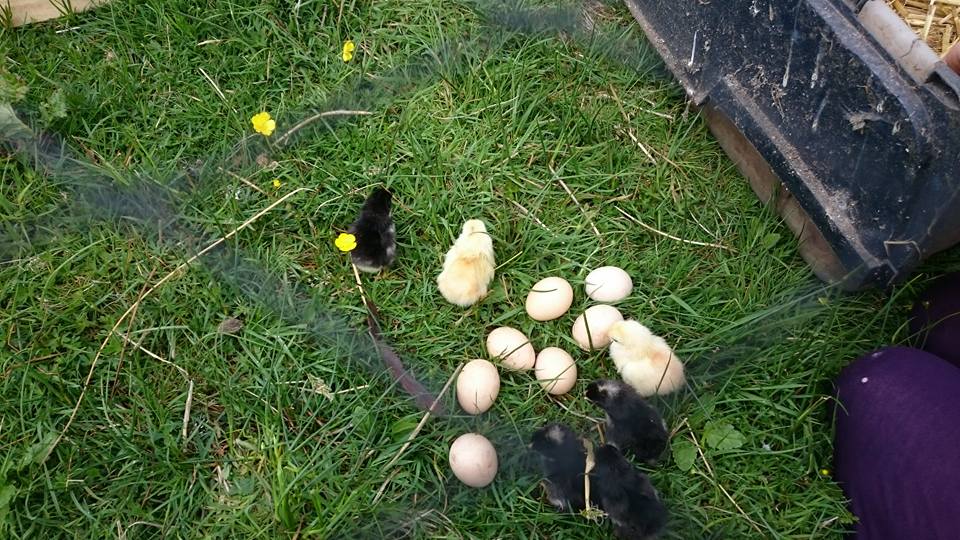 This is by far our best year for hatching, and for keeping things alive. We are letting the birds incubate their eggs until hatch-point and then moving them and their babies into nursery pens. Moving them while they are still broody can break the broody trance and mean they give up on the eggs but once the young have hatched there seems to be a strong enough instinct to keep them happy to carry on raising them even if there is a brief location change. We have perfected the art of grabbing the mother (Ady does that), grabbing any young (Scarlett), any unhatched eggs and some of the nesting material they had been sitting on (Davies) and then moving them all into a newly built house within a pen. So far it has all gone very smoothly with the exception of that co-parenting couple. They rejected some of the eggs (either unfertilised or non viable), ejected one chick found dead overnight and abandoned a pipping egg this afternoon. They are very happy with their single chick. We brought the pipping egg indoors thinking we would give it a chance to hatch. 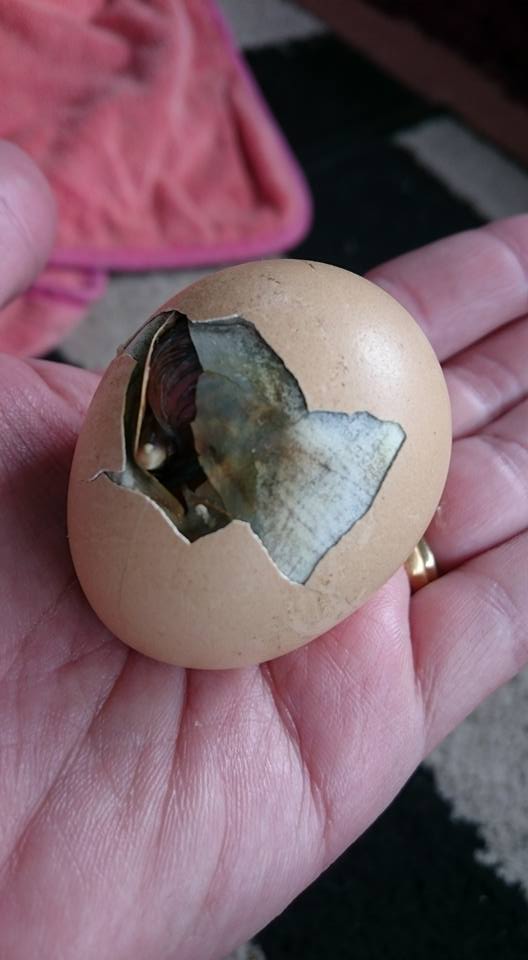 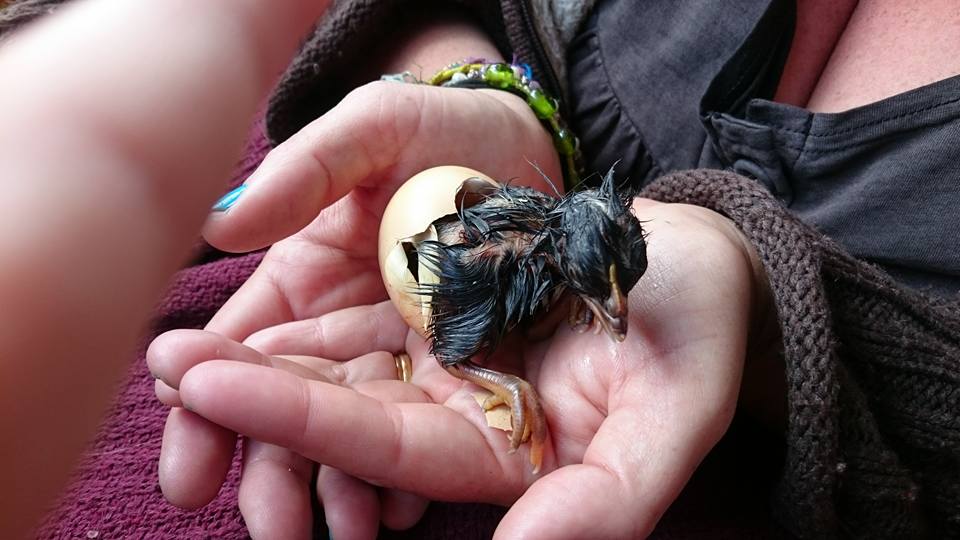 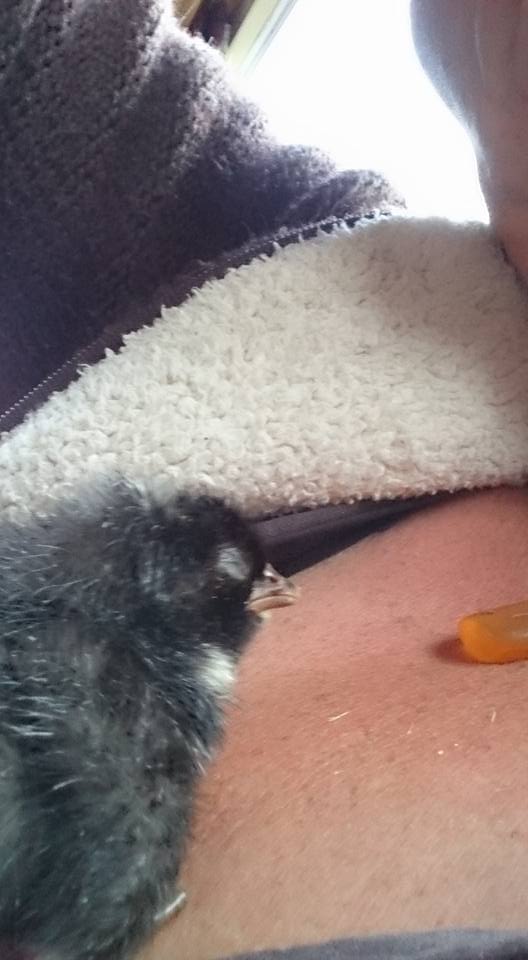 Which it did, eventually. We tried to reintroduce it to it’s mother(s) and sibling but they were having none of that and attacked it, as did the other couple of hens we tried it with. So it’s in the caravan at the moment. It has splayed legs meaning it can’t stand or walk properly. We have dealt with this problem before (we had a whole clutch of incubator hatched eggs back in Sussex who were all deformed, we suspect due to inbreeding and had to intervene with culling some and splinting a few more with surgical tape. It works really well and those we treated were perfectly fine once grown). Davies and I tried to splint it’s legs this evening but it’s still a bit small to manage it really. It’s drinking, pooping and certainly very vocal so if it survives the night we will try again tomorrow and keep seeing if we are able to re-integrate it to one of the mothers outside.

Scarlett has a pet duckling -as yet un-named but very loved. 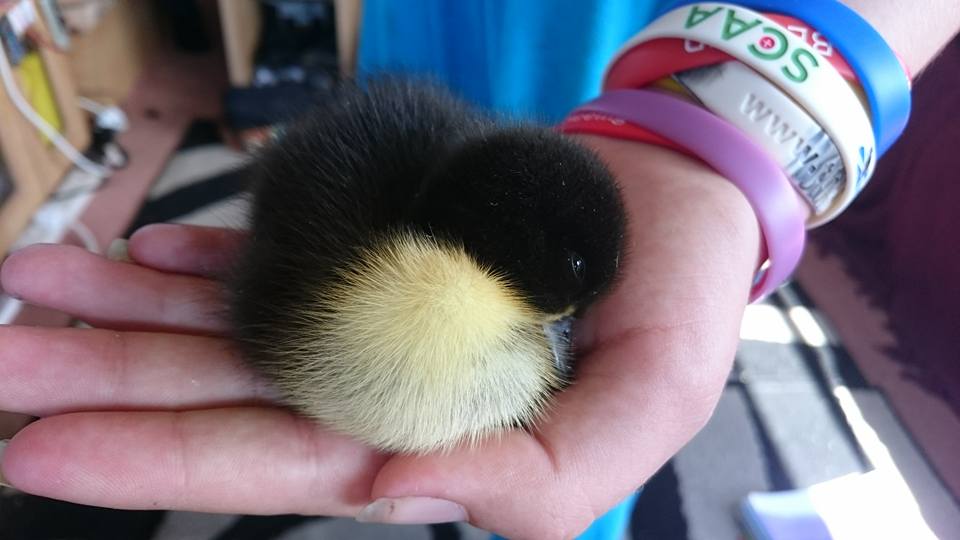 There are three more broody ducks, two broody geese, the turkey is broody somewhere and we strongly suspect there are more hens we have not spotted yet so the construction of pens continues and we are really glad that we are here this week to stay on top of all this rather than at the show.