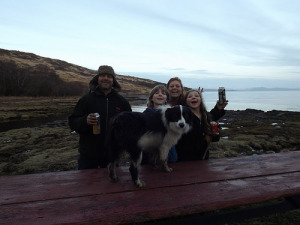 It’s been a gorgeous day today, as the photos above show – some stunning shots of the view from the sporran as Ady and I enjoyed morning coffee out there today, of Kinloch Bay, the rocky shore and the sea looking towards the snowy peaks on the mainland.

We celebrated today with a beer on the bench down beside the sea our second ‘yes-iversary’. It’s two years ago today we came to Rum for our interview for the croft and to move here. After a fairly tough grilling from a panel of interviewers we were told ‘Yes. We think it will be a challenge, but we think you’re up to it’. They had no idea how many times those words would ring in our ears over the next two years. And, I suspect beyond!

A stunningly beautiful February day, low sun in the sky making the remaining snow on the peaks glisten and the sea shine, two loads of laundry washed and line dried, chats with fellow islanders we encountered along the way as we walked from the croft to the pier, to the village and home again. We celebrated and toasted our life here, excitedly got email confirmation of our places on the cob course in a couple of months and discussed plans, hopes and dreams. We watched a sea eagle circle over the peaks, oystercatchers, geese and divers in the loch and a pair of ravens noisily fly overhead.

But our car, which we bought hurriedly in the very brief window of packing our lives up and moving from Sussex to Rum back in 2012 has finally died. It’s been ailing for almost our entire time living here and despite best efforts of the mechanically minded few here (we do not number among them!) and a bit of trying various things I think it has now drive it’s last. We will bring it to the croft where it will serve purpose as a feedstore for which is will be perfect – dry, almost rodent proof and of course spares such as the batteries will be of great use for electric fencing. But life without a vehicle for us will very quickly prove incredibly difficult. Not least groceries, jerry cans of petrol and the bulk buy purchases we make of flour etc, we also have regular deliveries of animal feed and fencing. Not to mention getting firewood up to the croft.