There was a day last year, quite probably in March actually, when I took a picture facing north, south, east and west and each one showed different skies, weather and conditions. This week has been much like that. We have had storms, rain and hail, gale force winds that threatened to rip the roof of the caravan off and did damage to the fruit cage, the chicken house, uprooted trees in the village, we have had bright sunshine and been outside in t shirts, there have been frosty mornings.

Ady once said that Rum is ‘Forever April’ – always sunshine and showerss, a state of flux but this week has certainly chucked every possible option at us.

The enduring weather to cling to, obviously, is the glorious sunshine we had today though. A full day spent topping the woodshed back up, planting out the seed potatoes, checking very pregnant Barbara Pig (Big Pig Move of 2015 is on schedule for next week awaiting some fence widgets hopefully coming on the ferry tomorrow), doing some maintenance on the log burner chimney, making a start on the wooden archway for the walled garden, popping to the village to say goodbye to some contractors who visit every winter and are done for this year.

Cups of tea outside in the sunshine, spare moments spent doing a row of scarf knitting to ensure a decent stash of crafts to sell during the season, working outside on the croft until nearly 7pm when it finally gets too dark to be out there.

Scarlett and Davies headed off to play on the beach today with Scarlett asking if it was definitely too cold to go swimming in the river. We reminded her that just 2 weeks ago she was asking to go sledging in the snow… 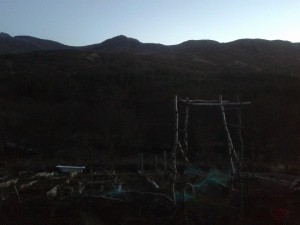 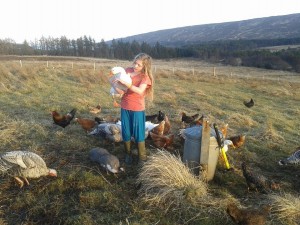