We’ve been playing host to another volunteer from France these last two weeks, our third French volunteer this year. Every volunteer brings something different to Croft 3, some need lots of guidance and support, others are able to merely be pointed in the right direction and off they go. I hope we are good hosts – we certainly try our best to negate the issues we found tricky while WWOOFing but it is inevitable that when someone is here for just two weeks they will end up with the more monotonous or mundane tasks as they are the easy ones to set someone up with.

It has meant that while I have spent lots of time off the croft distracted with various other tasks I have been able to at least know that *someone* is getting on with weeding, transplanting and tending the crops. So the herb spiral is weeded, more raised beds are weeded, peas are planted out, mint and strawberries have been dug out from the old polytunnel site and moved to new locations and the fruit cage is mostly growing fruit rather than grass and wild flowers once more.

Ady and I did have a productive Sunday between midges and created three cloche frames over the newly moved strawberries in the raised bed on the south facing side of the polytunnel. Lots of design input went into this with a couple of failed prototypes being rejected before the final design was decided on. Made with some pipe found on the beach, a dismantled pallet and some more scraps of polytunnel plastic we built three mini polytunnels that fit over the raised bed and can be removed for watering, weeding and harvesting. 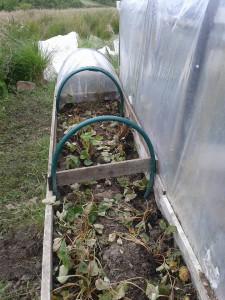 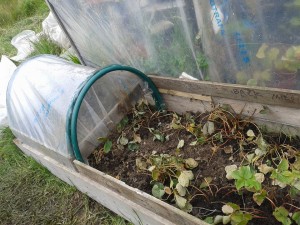 I managed to be ruthless with my tomatoes and cast out all of the flagging behind seedlings. I now have a slightly smaller area of tomatoes in the polytunnel, but only slightly…

We have herbs grown from seed ready to be moved into the herb spiral but need to construct a net around it as the chickens and geese will eat them otherwise. We have thinned out the thuggish mint and taken out the comfrey and moved that to the south side of the polytunnel. The ailing lavender which struggled with getting waterlogged in pots has been moved into a purpose built mini rockery next to the bench. Hopefully this more sunny and well drained spot made up of some rocks gathered from the cob house plot with prove a happier spot for it, also right next to the bench where we sit so it can smell nice and close to the fruit cage for bees to buzz between the lavender, comfrey and fruit trees and get busy feeding and pollinating. 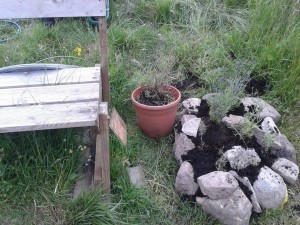 We now have 16 of the 20 raised beds with crops in, netted and weeded, a real victory in what has been an abysmal season. The polytunnel is crammed with late but getting there crops, the fruit cage is starting to actually produce fruit and today we discovered a previously unknown crop of bilberries ready for picking at a secret location. Against all odd thrown at us by a truly crappy summer so far progress is being made and we can see how far we’ve come.