It’s March and while the blizzarding snow today and wind related ferry cancellations for this week would prove me a liar I do know from the extra hours of daylight we’re enjoying that spring really is on it’s way so I’m going to claim a third winter on Rum survived.

And I know from my early days as an islander that winters survived is the currency that folk deal in from tourists to the ‘back in the day’ brigade. So get us, no longer winter survived token paupers and with surely a few extra points for with children, in a caravan, off grid, away from the village, no track yadda yadda yadda…

In many ways it’s been the easiest yet – the weather has been kind. Did I really just type that? Clearly there is an element of getting used to Rum weather at play in that statement but instead of the previous two winters offering of warm (well okay mild but it’s not as alliterative), wet and windy this winter has been (relatively) cold, dry and not quite as relentlessly windy. We knew precisely and exactly what we were heading into this year. I knew from bitter experience that I personally find November hard, that we need to be kind to ourselves and not place stupid expectations other than merely surviving on us. We had regular doses of friends visiting, a planned visit off to make February hasten, ensured that our focus remained on us four rather than anyone or anything else. We have made incremental improvements to our day to day living which have also made life easier too. Not mod cons as such but certainly a big step up from our early days here of filling jerry cans from the river and lugging them across to the caravan, of gathering sticks to burn on the fire for an hour each day even during the depths of our first winter.

In other ways though it has been the toughest. In our first winter we were able to tell ourselves it would be just this one and we could get through that. In our second we spent every testing moment promising ourselves it would be the last. This year we have had to face the reality that this is not a blip, just a small minor part of the process to an end result, this is actually our lives. We do really live in a caravan and have done for nearly three years. There is no sense denying it or pretending it is anything other than the truth. Yes, we hope it is genuinely temporary and five years from now it will indeed be a blip and part of the process but for now it is quite simply our reality and our life. Accepting that is quite hard. It’s not supposed to be who we are, it wasn’t our plan, not the dream we sold ourselves and the reason we gave up what we left behind. It is quite frankly pretty grim at times with very little in the way of romance about it. We lack privacy, space, stability. Our life here is tenuous, precarious, fragile. Our generation have been brought up on believing in bricks and mortar, a roof over our head, our home as our castle, conditioned to work for great chunks of our lives in order to secure the best possible address which we spend more time out of at work than inside living simply so that we can call it ours.

While the weather has been relatively kind we have still suffered seasonal losses at the hand of the elements. Our ducks have been the livestock hardest hit this year – all but two of the ten new ducks we bought in last season have died, our original ducks are still all fine, the younger ones simply were not able to cope with the weather. We only have three of the five guinea fowl we started the season with. The fence around the walled garden has blown down, the community polytunnel which we had pretty much full use of had all the polythene blown off along with the doors, taking with it all of our salami, all the overwintering salad, the early sowings of peas and garlic, the strawberries are exposed to snow, frost and whichever pests choose to feast on the remains.

This winter however was the winter in which we four made a decision. We decided that we would not allow the chance weather, the tough bits and whatever hardships were ahead to control us. We decided that this is our home and we’re going to find the way to make it work even if that does mean accepting we currently live in a caravan. We opened our eyes and saw the wonder around us. Dramatic landscapes call for dramatic weather, extreme and exciting lifestyles come hand in hand with extreme and exciting challenges. We took joy in the people around us here, in being part of this place at this time. We talked to family and friends and realised that when we speak of our lives here it is with a sense of passion, excitement and enthusiasm. We have discovered ways of making this craziness work for us.

It’s March. Midges are but two months away. It should be properly spring with us outside digging the cob build plot and catching up on the time we have slipped behind on. Instead we have been largely caravan bound thanks to the continued extreme weather. That could be cause for despair, depondency and a feeling of defeat. Or it could be the inspiration for venturing our barefoot, capturing snowflakes to look at under a microscope, photography, art and writing. 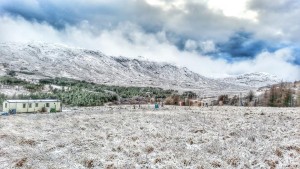 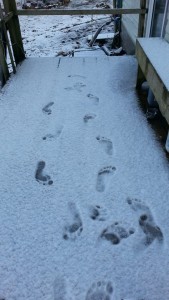