Our final Zone Two host took us back slightly south to the edge of the Yorkshire dales. It was the host so far that is furthest from my original expectation of WWOOFing with no livestock or growing to speak of, fully on-grid although with definite green and eco leanings. We spent two weeks there and it was rather unlike any other host in that we were mostly doing general maintenance type work on the house and garden. The hosts live in a beautiful big house with large grounds including a river running through and a slice of woodland. They comprise a couple, who have two grown up daughters (one of whom was back for the week during our second week there as she was helping with caring), two teenaged fostered brothers, teenaged foster twin girls, a girl with cerebral palsy and for our second week a girl with Downs and learning / behaviour issues. Also resident at various points during our stay were the hosts sister and her son, the hosts cousin and various teenaged friends of the children.

We did a fair bit of mowing and strimming, plenty of humping and dumping (we moved chicken houses, rocks, big glass panels, lumps of wood and more), lots of household-y stuff – we removed, sanded, varnished and re-hung three interior doors, some chainsawing of wood and some building stone walls. Ady did some clearing gutters and we helped with some solar hot water panel making. 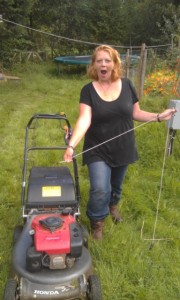 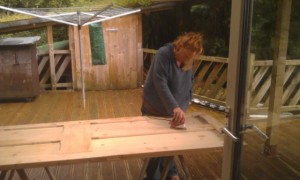 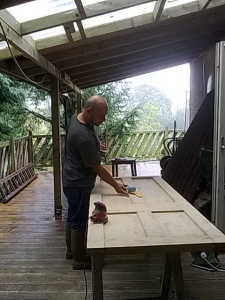 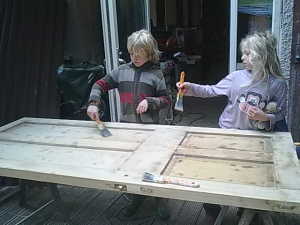 The children spent most of their time playing in the garden, building dams and making dens near the river. They caught up on some film watching, went swimming in the local open air pool and enjoyed hanging out with the children at the host.

We were very much treated as part of the family and Dragon and Star were invited along on all the trips and outings the children there went on – often they chose to stay behind with us – parks lose their appeal in their eyes when there are riverbanks and treedens to play at, open farms where you can pay to feed the animals are less fun when you have spent the last six months living on actual working farms feeding animals every day.

We had some great times exploring the local area, either with our hosts or at their suggestion and saw various local landmarks, had some great walks, spent time watching kingfishers hunting on the garden pond when the downpours of heavy rain flooded the riverbank and saw them out of their nests. The real highlight though was a trip to a local cave for our first taste of caving, which included getting utterly soaked, scrambling through caverns and tunnels, wading through underground lakes and rivers, marveling at stalactites and stalacmites, switching off our head torches and sitting in the pitch darkness, abseiling down drops and trying (and in my case failing) to climb back up them again. What an exhilarating and unique experience! 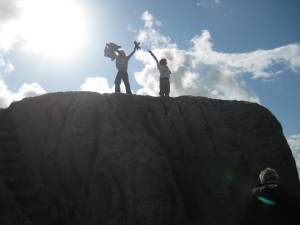 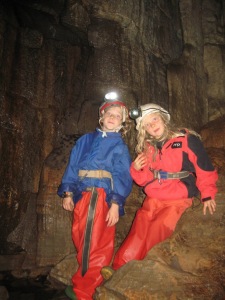 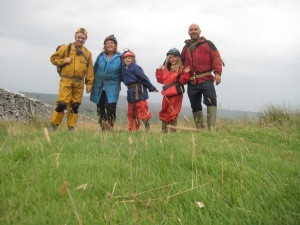 We also got to have a turn at cooking dinner (always lovely to have some time in the kitchen – we both miss cooking), played lots of games, spent evenings chatting and generally enjoyed getting to know a whole host (pardon the pun!) of new people.

Ady:
Bad: The usual WWOOFers accomodation is a straw bale bunkhouse, which was dark, damp and rather smelly. We spent the first three nights sleeping in there which I really struggled with, before moving into the main house. Our hosts kindly found space for us to sleep in the main house and from then on our accomodation was fine.
Good: We were made very welcome and were very much a part of the family; sharing mealtimes, entertainment, trips out etc. with everyone there. It was excellent generosity and hospitality and I really enjoyed being part of it.
Learnt: I learnt loads about being with and caring for profoundly disabled children. What their needs are, what care they need, how to interact with them. I really enjoyed that and would now feel much more confident in being around children with such special needs.

Dragon:
Bad: That we didn’t get to sleep in the strawbale house for the whole time we were there!
Good: I really enjoyed playing by the river and I saw kingfishers.
Learnt: About caving – the whole world looked different from underground. There was no grass, you couldn’t see the sky up above and it felt like being on the moon. It was a very good experience, I’m glad we went there.

Star:
Bad: There were no jobs Mummy & Daddy did that we could really join in with.
Good: That we saw kingfishers, the hosts were really nice people. I really liked going caving.
Learnt: I had a go at sanding the doors and that was something I had not done before.

Nic:
Bad: There were a couple of aspects of our time at this host that I struggled with. The first was the overall environment not really being what I had expected. The listing mentioned looking after chickens, working in the vegetable garden and being involved in alternative technology. What we actually spent time doing was mowing lawns, sanding doors, tidying a workshop and moving rocks about. I also found the busyness of the house something I needed to escape from every so often. We were never less than 14 around the dinner table which had me sloping off to the bedroom to read for half an hour every so often. I found the atmosphere of friction with teens, children with very severe disabilities and the pressure of wanting to be sure my own childrens’ needs were being met quite intense.
Good: Once again my good is going to be ‘the people’. I really enjoyed spending time with the various people there one to one. I found people with ideas and ways of life similar to my own and those I am seeking, I found people with incredibly different beliefs and ways of being. I enjoyed discussion and debate and swapping life stories, I enjoyed learning about parenting styles different but equally considered and thought out to my own. I learnt from spending time in the company of parents and teens and finding myself empathising with both sides – something I hope I am able to draw upon when Dragon and Star are older and pushing and pulling in different directions to mine. We were shown kindness, generosity, warmth and affection and feel priviledged to have spent time in this family home and shared their lives for a couple of weeks.
Learnt: I didn’t actually acquire any new skills at this host, but as I am firmly of the belief that it’s all but impossible to live for one day without learning anything so certainly can’t have spent a fortnight in a different environment without learning something. On that basis I learnt about fostering, about caring for disabled children, about living in a small village in a tightknit community, about caving and about keeping a house with so many occupants running day in, day out.