Before I was born my parents had a pair of black girl cats. One of them moved out when my brother came along a couple of years later – clearly I was more than enough children for it to decide it was not suited to a family household! The one who remained was more tolerant and put up with being carted around, cuddled and loved in the way that only a small child can love a pet… she died when I was about 10 and I recall being utterly inconsolable, my first real experience of bereavement. I cried for weeks, was taken out of assembly at school in tears when a poem about a cat was read out and mourned her for a really long time.

As soon as Ady and I set up home together I was determined that a house was not a home without a cat. Within months of signing the deeds we had brought a pair of little black kittens home. The tore around the place, scrambling up curtains, getting into all sorts of mischief. They were much loved and we were devastated when we lost them both to the busy road we lived on at just a couple of years old. We swore then to only get cats that would be happy staying indoors.

We then spent all our weekends visiting cat rehoming centres locally looking for the right cat to bring home. We looked at a pair of semi feral cats at a rescue centre in Brighton every weekend for about 6 weeks. They were fierce, spiteful looking cats who hissed at us every week with flattened ears and glaring eyes. The staff there said they were unlikely to be rehomed and were only suitable for someone with no children or other pets who was prepared to have house cats and spend time bringing them round. That sounded just like us so after a home visit to check our suitability we brought them home.

They did indeed take a really long time, years infact, to come around. For weeks they would only come out at night after we had gone to bed, for months we could not get near them, for years one of them lived in the bathroom while the other one chased her back in if she tried to come out. They mellowed though and by the time we had Davies they were a happy pair of lap cats who didn’t just tolerate each other but curled up next to each other to sleep and shared a food bowl. They moved with us from Sussex to Manchester and back and in their latter years eventually did go outside. Sadly that same road spelled the end of one of them, aged about 15, the other lived a very very long life finally going blind and passing away aged about 20.

It’s been nearly six years but my lap still feels empty at night when I sit down and there is not a cat curled up in it. We tried taking on a tiny kitten shortly after we moved to Rum but he was too tiny and scared to be a good match with Bonnie as a puppy and we feared disaster would occur if we tried to keep them both in such a small space. He is happily homed in the village with his sister. We took on a pair of brother cats last year from a friend and while they are here still on Rum and happy enough they are not the lap cats I was hoping for.

Then a few weeks ago Scarlett and I saw a black cat on a poster in the window of a charity shop when we were on the mainland. She looked just like the black girl cats I have had throughout my life and was looking for a home. We dismissed it as not feasible for us given we were heading home the next day. I had made contact with an animal rescue place to find some peafowl for Ady and had mentioned in passing that if ever a black girl cat came up we would be interested. A succession of phonecalls and emails and a fortuitous mainland visit for me to the beekeeping course a couple of weeks ago meant everything fell into place and along with Ady’s peahens I brought back the very same little black girl cat we had seen in the poster which just so happened to be the rescue centre the peahens were from. Delivered to me at the ferry port by a woman who grew up on the Isle of Rum!

The cat’s owner had died and the family had tried to take her on but one of them was allergic to her and so it had not worked out. She is a very friendly, gorgeous little black girl cat who has settled into our home beautifully and my lap is empty no more. Bonnie is being tolerant rather than welcoming but they are happy enough to co-exist without drama, she has been outside exploring and enjoys the sunshine and lazily watching the chickens with the odd burst of butterfly chasing exercise.

Having allowed her to explore one space at a time we allowed her in the bedroom today where she promptly decided the bed was a good place to hang out. Six years has been too long to not have a cat on my lap or curled up on my bed. I am a very happy Nic indeed. 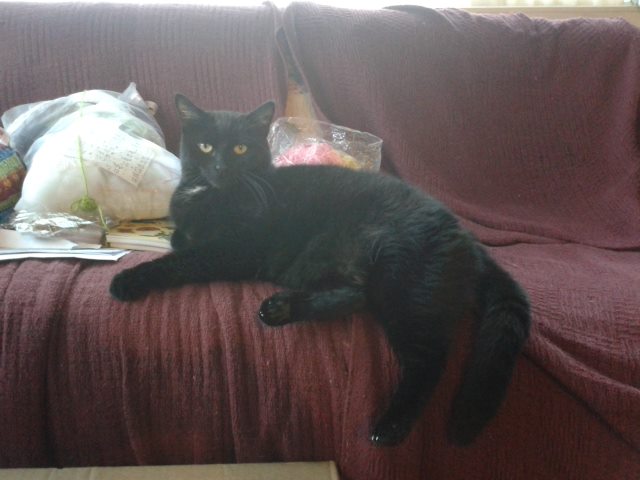 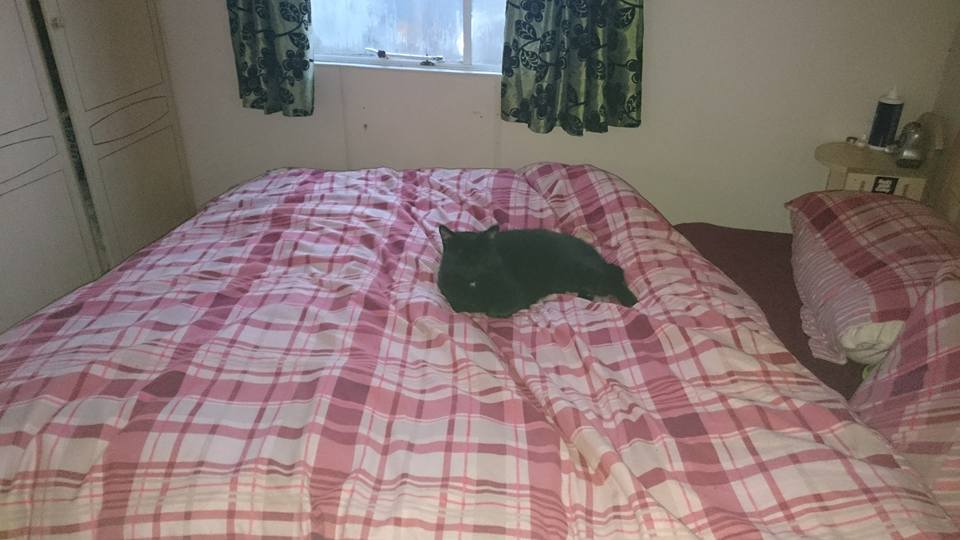 Meet Kira – she came to us with the name Piper but didn’t respond to it so we decided to rename her. The Gaelic word Ciara means ‘wee dark one’ so we have chosen the phonetic spelling Kira which she happily comes to when called.