We stepped out of the static this morning and as I put my wellies on I noticed I was not alone – a majestic stag was sharing my air space looking for all the world as though this was his croft rather than ours!

What was really amusing was that I was looking across the croft at a herd of about five hinds in the distance and didn’t even notice the stag right next to me!

We were up early this morning as Dragon and Star were off to spend time with Ranger Mike for the J Ranger programme. J Ranger aka junior ranger is something the three of them have come up with together and are happily spending a morning a week on. So far they have covered biomes, continents, latin names for various Rum birds, tree identification, Darwin’s tree of life, rangering around the world. They have participated in events including Changing Seasons, red deer rut, biodiversity challenge and Rum bird identification and more. Today was a really special treat though as Mike was doing some  bird ringing and Dragon and Star got to observe and assist in that. I stayed around for a while as it was really cool and we learnt about setting the nets, how birds are ringed and the various information gathered and looked at Mike’s books with all the necessary reference information to work out the age and gender of captured birds.

It’s a really exciting time of year for birders as we are in a good geographic location for lots of migratory birds who stop off here for a while on their way to their winter homes. We also have lots of fledged young heading off and this is a very busy time of year for birds with populations at their peak as young have hatched but none have yet failed to survive a winter. Just last week we saw our first swan here on Rum and we have been watched large skeins of geese fly across the sky for a few weeks now.

Today we were priviledged to have close encounters with robin, dunnock and great tit while I was there and the further encounters for Mike and the children of goldcrest (the UKs smallest bird) and more tits after I left them to it. Bird ringers have to be 14 and there is full training and guidance required before you can get fully involved but we were very fortunate to be able to assist and watch and learn from Mike as he ringed the birds. 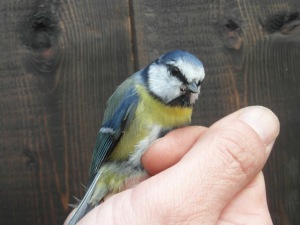 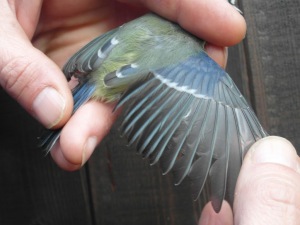 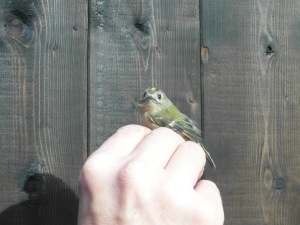 I went back up to the croft to do some helping where I could on the Grand Decking and Skirt Project that has been undertaken this week. Sandy has been up helping us create a skirt around the static. This has various purposes; it looks a million times better, it stops the wind getting underneath and lifting the static, it helps keep warmth in rather than a constant draft under there and it just give a rather more permanent feel to the place. Sandy, master joiner / carpenter / wood worker has also built us some decking between the two doors on the static so we now have a veranda. We shall be taking cocktails, watching the stars (and maybe even the northern lights), the wildlife and the rising and setting sun from our veranda – I very much look forward to inviting people to sit on it and calling the ‘darhling’ 🙂

My role in helping largely involved making tea it has be to said. I also made soup and rolls for lunch and I did remove all the nails from a large pile of reclaimed wood. I was also very important in supporting Sandy in his role of taking the mickey out of Ady who is a wonderful man but will never be a carpenter when he grows up! He should probably also cross off carpenters apprentice from his list of potential careers too!

Dragon and Star appeared back at lunchtime, rather like the Bisto kids – having told them to come home when they were hungry I suspect their noses led them this way as sweet potatoe and red onion soup served with fresh from the oven crusty rolls smelt very good indeed in the cold autumnal afternoon if I do say so myself.

I finished off a story we’d been reading – the kids and I spent most of yesterday snuggled up together while I read it’s been ages since we read a story together and we finished this in two days and loved it. Definitely need to stock up on good books on the kindle for more of that over the coming months.

The day ended with a delicious venison pasta bolognaise and the introduction to Dragon and Star of Fawlty Towers. They were not convinced despite Ady and I roaring with laughter – surely this is timeless comedy…

And finally following the suggestion of a friend our latest way of securing funders for the compost loo is offering space within it’s walls to post something up – advertise, declare undying love, write a poem, place a work of art.. I can’t think of more captive an audience than someone using the loo. Your chance to be a piece of our toilet wall.., who could resist!

2 thoughts on “Deer as punctuation marks”