Today we released the mama duck and her three ducklings. She took a while to lead them out and infact she came out a couple of times by herself before finally bringing them out with her. She has been penned for weeks and weeks – the incubation period for duck eggs is 28 days and I think the ducklings are about 6 weeks old now, so penned for about 10 weeks in total. She must have been so happy to get back to that river for a swim. And she took her babies and introduced them to the idea. 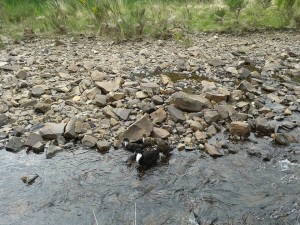 They took to it like the proverbial ducks to water! Scarlett was taking her ducklings for a river swim today too. They are definitely smaller than their wilder siblings and with less feathers and more down. We will have to work at toughening them up more. They are outside all day long now in a pen and we will work towards free ranging them gradually. 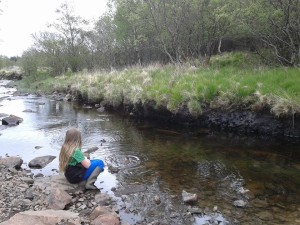 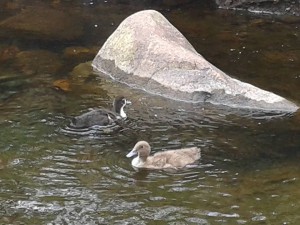 Seeing them all so happy swimming in the river makes me appreciate how lucky we – and they – are to have a river running along the bottom of our croft. The pet ducklings are back inside the caravan for the night while the wilder ones are snuggled up in a heap with their mama, all looking like part of the flock of croft 3 ducks.

The ailing gosling kept up with the gaggle all day today and also had a river swim. 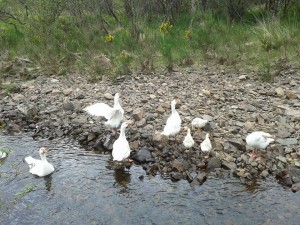 It still lags behind a little but seems to have been more accepted by the gaggle so is also hanging out with the pack tonight outside instead of being penned over night.

Meanwhile on the croft we have been weeding, netting and fixing the raised beds in the walled garden. Four of eighteen now netted with hoops and excess netting from the fruit cage roof which I cut off this morning. They are looking good. I have a couple of trays of seedlings to transplant into at least two more beds so more weeding and netting to do. The plan is to use as many beds as possible this season with any unused ones getting a good covering of seaweed and scythed cuttings mulch to inhibit weed growth and add some nutrients to the soil ready for next year. I am hopeful of getting as many as possible planted up though.

Finally today we harvested a second crop of strawberries which were delicious for pudding tonight. 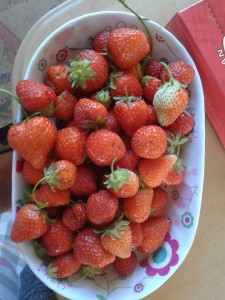